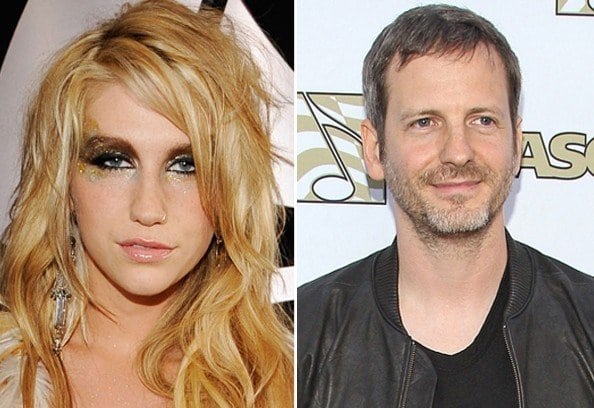 After several attempts of freeing herself from Dr. Luke, Kesha finally dropped a major lawsuit against the producer, accusing him of sexual, physical and mental abuse. The lawsuit also describes how Dr. Luke controlled her life since she was 18.

Kesha, who recently dropped the $ from her name, was mentioned several times on Vigilant Citizen due to the fact that she was one of the most obvious pawns of the MK music industry. The most obvious example is the video Die Young (see my article about it here) which was replete with Illuminati symbolism and laced with a sick message that was released just prior to Sandy Hook.

Although she was still firmly under Dr. Luke’s control, Kesha showed signs of “waking up” and wanting to take control of her career. After the release of Die Young, Kesha took to Twitter and claimed that she was forced to record that song.

Dr. Luke is currently a leading figure in the music  industry as he produced tracks for the likes of Katy Perry, Britney Spears, Jessie J, Nicki Minaj, Rihanna and many other pop stars. Some of his singles were analyzed on this site such as Britney’s Hold it Against Me, Jessie J’s Price Tag and Katy Perry’s Part of Me. In short, he’s one of the people who tells industry puppets what to sing – and what they sing is part of an Agenda.

In 2012-2013, Kesha recorded a song called Dancing With the Devil which aptly describes her relationship with her handler Dr. Luke and the music industry in general. Here are part of the lyrics.

(Hear the song and read the full lyrics in this article)

As you can see, the lyrics convey a sense of helplessness towards an industry she describes as “the Devil”. When one looks at the lawsuit against Dr. Luke, one can definitely understand where she is coming from. It is courageous step which is rarely taken in the music business. 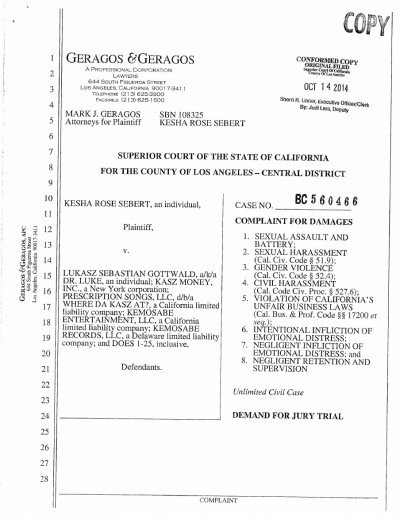 The first page of a lengthy, 24-pages long lawsuit.

The lawsuit describes a typical handler/MK slave relationship that began at a young age and was punctuated with constant abuse, mind-altering drugs and total control over her life. The introduction of the lawsuit states :

“At eighteen years old, Ms. Sebert was induced by DEFENDANT LUKASZ SEBASTIAN GOTTWALD (a.k.a. “Dr. Luke”), a successful music producer, to drop out of high school, leave behind her family, home, and life in Nashville, Tennesse, and come to Los Angeles to pursue a glamorous career in the music industry.

For the past ten years, Dr. Luke has sexually, physically, verbally, and emotionally abused Ms. Sebert to the point where Ms. Sebert nearly lost her life. Dr. Luke abused Ms. Sebert in order to destroy her self-confidence, self-image, and self-worth so that he could maintain complete control over her life and career.”

The lawsuit provides disturbing details about the abuse suffered by Kesha.

“Ms. Sebert took the pills and woke up the following afternoon, naked in Dr. Luke’s bed, sore and sick, with no memory of how she got there. Ms. Sebert immediately called her mother and made a ‘fresh complaint,’ telling her that she was naked in Dr. Luke’s hotel room, she did not know where the clothes were, that Dr. Luke had raped her, and that she needed to go to the emergency room. (…)

The lawsuit also claims that, at one point, Luke made her snort a substance before boarding a plane and, when in flight, assaulted her while she was drugged. It also describes the psychological hold Dr. Luke had on Kesha.

Dr. Luke repeatedly threatened that if she ever told anyone about these abusive incidents, he would destroy both Ms. Sebert and her entire family. (…)

“He would tell Ms. Sebert that she was nothing but his pawn, and if she did not obey his orders, that he would end her career”

“concluded that Dr. Luke had physically and psychologically damaged Ms. Sebert to the point where continuing such contact would be ‘life threatening’ to Ms. Sebert.”

This is just glimpse of the abuse, control and manipulation that goes on in the entertainment industry. So, tell yourself, when Kesha and other artists walk around like this: 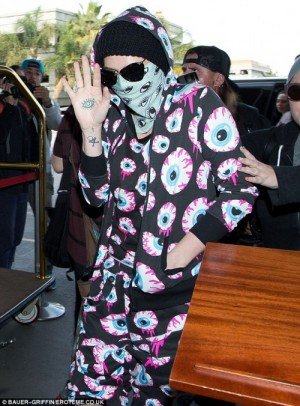 Kesha wearing completely covered in the Illuminati One-Eye sign + an eye on her hand.

… it is not because it is “cool”. It is a sick way of telling us that she’s a complete slave of the Illuminati industry, that she is “owned by them”. Let’s hope she will be able to somehow break free from her “dance with the Devil”.

Amanda Bynes Tweets About Father’s Abuse and Microchip in Her Brain; Now Under Involuntary Psychiatric Hold