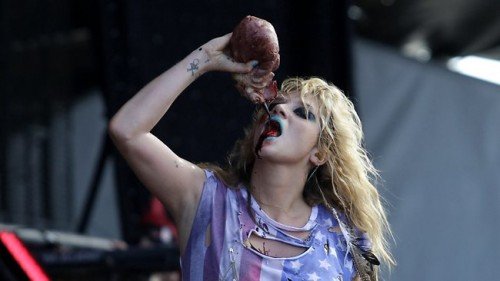 I have never written a full article on Ke-Dollar-Sign-Ha but I’m pretty sure most of you are aware of her being part of the “let’s degenerate our youth agenda”. In a recent performance, Lady Gaga – sorry, I meant Ke$ha, drank what looks like blood from what looks like a heart in what looks like the reenactment of a blood ritual. All of this while wearing a teared up and faded American flag as a dress. And make-up emphasis on one eye. So uplifting.

In some occult circle, drinking fresh blood from a heart is said to give maximum magical potency.

MOVE over Ozzy Osbourne, there’s a new blood-sucking shock jock in town and her name is Ke$ha.

But unlike the Prince of Darkness, the 24-year-old Californian hasn’t sunk her teeth into a live animal – yet.

While she’s known for her trashy on-stage antics and expletive-laden monologues, the Tik Tok singer still managed to shock punters at Sydney’s Future Music Festival at the weekend when she drank blood from a heart – to the song Cannibal, of course.

The potty-mouthed pop princess held the heart like a goon bag over her mouth, letting the blood ooze across her face and down her chest on the main stage at Royal Randwick Racecourse.

Covered in glitter and draped in a shredded American flag T-shirt, Kesha Rose Sebert performed much of her 45-minute set dripping in blood.

Ke$ha’s publicist did not return calls yesterday, but the pop star is no stranger to Lady Gaga-style shock and awe on-stage antics.

Her high energy live shows, loaded with as much sexual innuendo as her song lyrics, are inspired by pop predecessors Madonna and Britney Spears and feature six-foot penis costumes, revealing rhinestone-coated outfits and lots of glitter. 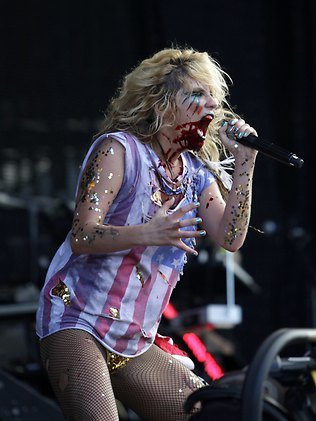 Her target audience is pre-teens. 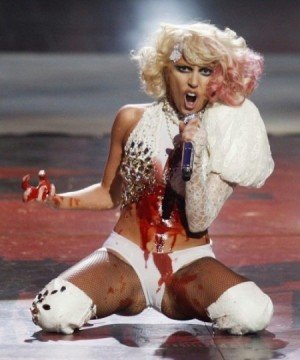 FacebookTwitterSubscribe
Related Topics:ke$haLatest news
Up Next