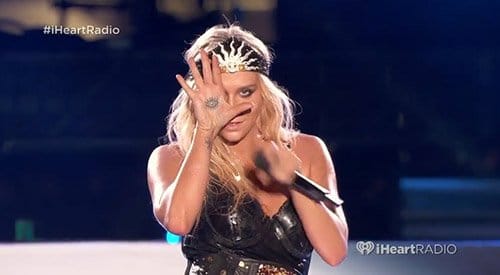 The iHeartRadio Ultimate Pool Party was a two-day musical weekend that took place on June 29th at Fontainebleau in Miami Beach. The high profile event featured pop acts such as Miley Cyrus, Pitbull and Ke$ha. I wasn’t aware this even existed but when a VC reader sent me stills of Ke$ha’s set, I had to watch her performance as it appeared to be an extremely blatant, Illuminati-themed set. I watched the whole 50 minutes thing…and it was. My head is still hurting. If you can take it, here’s the performance.

The show begins with Ke$ha addressing her fans about being “misfits” and fighting for acceptance. How are her fans called? “Animals”… It’s as if this name was chosen by the elite that is laughing at the people who love this stuff.

The first thing we then see is a planet exploding and turning into a giant all-seeing eye. This pretty much sets the tone of the entire performance.

Planet earth (I assume) turns into a giant eye-ball…A way of saying that the Illuminati controls the world?

The audience then gets 50 minutes full of mind-numbing, hypnotizing symbolism.

At the end of “Crazy Kids”, Ke$ha stayed like this for a few seconds while the crowd cheered. Hurray for Illuminati!

Even the keyboard player had an eye on her shirt.

Later in the show, Ke$ha wears a headdress adorned with an all seeing eye between two pyramids.

While the above headdress looks like an esoteric, third eye, pineal gland type thing which usually refer to “spiritual enlightenent”, there isn’t much of that going on during that show. For instance, before the next song, Ke$ha asks the crowd:

“Do you guys like balls? I do. I love them. I love every kind of ball. I like big balls…I like little balls…I even like saggy balls, they don’t even bother me. That’s good news for the older people here. But my favorite ball, is an eyeball.”

She then does this.

Her favorite ball, is the Illuminati all-seeing eye ball. She said it…and probably nobody there got it. That’s pop music today.

Can Ke$ha display her servitude to the Illuminati in a clearer way? The answer is yes. Here’s what happens during that song.

Then come out The Residents, a group comprised of eyeball guys dressed in Masonic-type who dance around with Ke$ha.

Behind the performers are eyeballs flying around on a Masonic checkerboard pattern.

The dancers had inverted pentagrams across their chests while Ke$ha’s costumed featured an inverted cross (inside a heart). That’s how you make black magic and satanism appealing to kids. Also, singing to them “we’re gonna die young” is a nice touch.

An all-seeing eye inside a triangle? Sure, why not. Let’s brainwash these kids good.

This guy is just watching all of this, taking it all in, mesmerized by the flashing images, telling to himself “Wow, this is awesome”.

In short, this was what young people are paying to be exposed to. Pure, mind numbing, Illuminati symbolism with no real artistic meaning or content at all. Ke$ha’s last words of the show: “I hope you all get laid tonight!”. Such insight, such inspiration, such depth. Wow.

there is a devil influence in the music of today

Why cnt we all come together and stop this madness? what ever happened to fighting for our rights. FREED OF SPEECH ? too bad they are trying to form a one world government. so no more constitution. I pray to god everyone wakes up.

I've been a heavy metal fan all my life. I'm closing in on 40 and it's crazy how much has changed. When I was a teen, this type of symbolism was solely found in death metal. There are two types of death metal bands (this also applies to black metal): 1. absolutely genuine satanism, and 2. Purposely over the top lyrics that are so grotesque they become black humor. Anyway, inverted crosses and stuff like that could only be found in, for instance, a Deicide video. Can you imagine Debbie Gibson doing this kind of crap? But now, the modern day Debbie Gibsons of the world make videos every bit as evil as anything spawned out of Tampa in the early 90s. In fact, it is my love of metal that really opened my eyes and made me realize that it's not a coincidence that so many bands sing about the same stuff. Even the bands that aren't overtly satanic will sing songs that very clearly reference a new world order, templars, etc. Hammerfall and Kamelot are good examples. Yet, in all my life, I've never met a metalhead that gave this type of thing much though. Mostly it just… Read more »

Sorry guy, when i got “saved” i read some eye opening books on music and rock and i dropped rock and metal. Now i would like to drop all movies and most music as i am reading more on the mk ultra now. No wonder the bible prophecies that Christ would return. He has to. As for metal Christian bands, they have to be infiltrators working to keep christians confused and ineffective. A true Christian should know to shun things of darkness.

Most people are morons, and suck up whatever garbage is put in their face. I'm glad sites like this exist, it's helps people make sense of the hidden subliminal messages being feed into television, films, music, advertisements, print media etc… As for talentless ugly performers such as the above non entity (and the host of others such as, gaga, the fat reality show Kim whatshername etc…), the programming must work effectively, because these puppets have a mass of followers and make millions of dollars. Gotta love the suckers, they have no idea, no brains, no class and no taste !!

I first learned about subliminal messages from a Dean Koontz book, of all things. I think it was Night Chills?

Scared the crap out of me that I started seeing sex and death subliminally in just about everything the media produces.

Seeing all this stuff, this crazy imagery that alludes to an even crazier organization, the fact that the Illuminati exists and so few are even aware of it, it's so f-----g disorienting. I mean ,seriously, it feels like I'm in an anime. What the f--k is this life?

I've noticed a few people mentioned Iran. The Rothschilds own every bank in the world apart from three countries, which are: Cuba, North Korea and of course Iran. Why d'ya think the "Elite" have targeted North Korea and Iran recently (in the past year or so) from what they show in the news. I mean how come they don't get mentioned now?? I mean not even a little peep considering the fact they were manipulating the public into thinking North Korea and Iran were going to attack "us". Hmmmmm, not gonna attack us now then eh? Let me also tell you I have not read one article on this Syria debacle, neither have I watched 1 second of news coverage of it. Because I know why they are there and what their REAL reason is on why they are in Syria. Don't believe the bullshit media. They manipulate the truth and tell YOU how THEY want YOU to think…….. Thanks VC, keep doing ya thing 😉

the video is private 🙂

Christians out there, I have started a Twitter to help raise awareness of the truth. Please check it out and follow if you can! God bless that we help renew the mind of those are lost in the world. https://twitter.com/KingdomForGod

Ke$ha was in the Philippines recently (based on when I typed this comment). I saw some pictures of her performance. Lots of crazy single-eye poses, and then on the sidebars, there was one that talked about her "occult behavior". She said the leads the Illuminati. :/

"Alright, we'll let you in, but you gotta sell it!"

My head hurts by listening/watching just the first minutes of it @.@

while this is obviously mindnumbing trash, which i wouldn´t expose my kids to in a million years.
the whole illuminati / mk -spiel is just the producer´s way of messing with people who can read between the lines. ever since jay z started his oto-clothing line just around the same time he bagan colaborating with the likes of coldplay and started hanging out at indie-shows in brooklyn, it´s common industry knowledge that using that sort of imagery will leave a mark and start controversy within our pop culture. and not only for brainless fans or "animals" for that matter, but a much wider audience, who normally wouldn´t expose themselves to entertainment aimed at somewhat challenged tweens/ teenagers.
there is no such thing as BAD publicity. some producer, choreographer and visual artist is just f***-ing with you and laughing all the way to the bank.
i personally blame braindead parents for this kind of trash to spread like a virus. you might aswell feed your kids cookie dough for breakfast.

At this point I think it is all very deliberate because this symbolism is out of the closet and widely known thanks to the internet. She is merely trading on the controversy that her handlers KNOW will invoke a reaction and get more publicity and theoretically more sales of her "music". I doubt if keslut (er, ke$ha) even has an inkling of what she is truly symbolizing herself (other than "look at me, I'm a devil worshiping skank!"), she's just a puppet with auto tune.

If anyone even tries to state the fact these artists aren't aware of what there representing or doing,
There are in absolute denial. This symbolism has become even more blatant and 'all-seeing' to the 'eye' than ever before. They fans or rather 'puppets' just don't want to let go of their idols. A very sad truth, and unfortunately it will become much worse.

I just hate them. I keep telling my classmates at school to stop listening to lady gaga and other illuminati s--t because they will hypnotize you but still they laughed at me. They said that Im crazy. Well f--k them. I admit I was one of them singing illuminati songs but I woke up from the truth and I realized that I was listening to s--t

Good Lord. I just wasted ten minutes watching that crap and I can't believe anyone else ever would. That woman has no talent or presence and anyone who thinks she wouldn't be voted off American Idol (also idiocy) in the first audition is insane.

Who do you have to blow to get off this planet?

Amazing how blatant the symbols are and how are all over.In movies,,,music videos and ads…Scary indeed!
The Illuminati is on a serious mission.

VC could you please take time and also look into Africa's(South to be specific) movies,theatre and music.

Glad a had a chance to watch it before it mysteriously went private. This is horrible what the hell is going on with our earth.