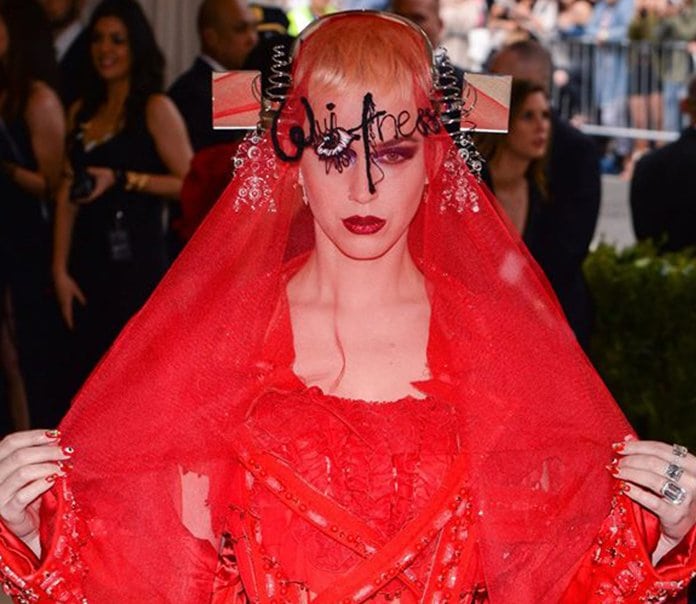 Katy Perry has been making headlines for all the wrong reasons, causing her fans to question her mental sanity. Is she heading towards a typical pop star meltdown?

Once in a while, a different celebrity is pushed under the “bad spotlight”, where a string of bizarre, humiliating and career-hurting things happen to them under intense media scrutiny. Over the past years, I have covered the breakdowns of once soaring celebrities such as Britney Spears, Kanye West, Shia Leboeuf, Amanda Bynes, and others. None of them fully recovered from these traumatic events. All of the them now appear completely “out of it”.

The most troubling part of these breakdowns is the fact that they are often accompanied by pictures and performances that are heavily symbolic which imply that they are under intense control … and that their breakdowns were right on schedule. Is Katy Perry heading that way? One thing is for sure, we are seeing the classic symptoms and symbolism of a classic “pop star breakdown”. The pattern is there for those who can see it.

Although Perry has been at the forefront of the elite’s agenda for years (read my several articles about her), she nevertheless enjoyed universal praise from fans, critics, and media in general. This has changed in the past months.

Things began to go sour around the time she released Chained to the Rythm, a song that, coincidentally, heavily promotes to the elite’s agenda.Perry introduced this song at the 2017 Grammy Awards (the performance was very symbolic). Before the awards show, Perry caused some stir when she made fun of Britney Spear’s head shaving incident. When Ryan Seacrest asked her about her brief hiatus from the music business, she replied:

Before the awards show, Ryan Seacrest interviewed Perry and asked her about her brief hiatus from the music business. Her reply caused some controversy as it made fun of Britney Spears’ infamous head-shaving event.

“It’s called taking care of your mental health, I haven’t shaved my head yet.”

This comment was odd yet strangely specific. It cold-bloodedly ridiculed a traumatic event in Britney Spears’ life nearly exactly 10 years after it happened. It was like a 10-year anniversary “diss” from the elite to Britney Spears – through Katy Perry.

Britney Spears shaving her head during her public meltdown in February 2007.

The fact that Perry made this comment on the 10th anniversary of this event is somewhat odd – as if it was a sick “inside joke” of the industry. What is sad about this comment is that Perry might be heading down the same horrific path. Here’s a quick recap of the events leading to Britney Spear’s breakdown.

To understand the kind of destructive pattern industry slaves are subjected to, here’s a quick recap of the events surrounding Britney Spears’ meltdown.

Feb. 16, 2007
Spears is seen at a hair salon in Tarzana, Calif., shaving her head. Later, she was seen at a tattoo parlor getting inked on her hip and wrist. The “makeover” came the same day as reports on TV and Web sites that Spears, who has drawn criticism for her recent partying and sloppy behavior, had briefly checked into rehab at a treatment center in Antigua. Hair purportedly clipped from her head is now for sale on eBay.

Feb. 20, 2007
Spears checks into a Los Angeles in-patient facility following a bizarre weekend that included shaving her head and getting new tattoos.

Sept. 9, 2007
Britney Spears returns to the spotlight in a big way in Las Vegas, opening MTV’s annual star studded Video Music Awards (VMAs) with a performance of her new single, “Gimme.” But, her performance provoked plenty of negative feedback; out-of-synch lip-synching, lethargic movements, a bit of paunch in place of her once-taut belly – all came under scrutiny. At times she just stopped singing altogether, as if even she knew nothing could save her performance. 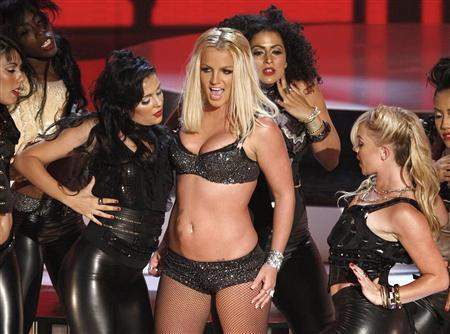 Jan. 3, 2008
Spears was whisked away in an ambulance after police were called to her house to help end a nearly three-hour custody standoff involving her young sons. She was taken to Cedars-Sinai Medical Center, Entertainment Tonight reported on its Web site. A Los Angeles Police Department spokesman told City News Service that Spears appeared to be under the influence of an unknown substance.

Jan. 31, 2008
For the second time in a month, Britney Spears was taken from her home by ambulance and escorted to a hospital by more than a dozen police officers as two helicopters followed overhead. A Los Angeles police officer, who spoke on condition of anonymity because he was not authorized to speak on the matter, said the 26-year-old pop star was being taken to “get help” but did not give the ambulance’s destination. The Los Angeles Times, citing unidentified authorities, said Spears was taken to UCLA Medical Center to be placed on a “mental evaluation hold.”

Feb. 5, 2008
A restraining order was issued against Sam Lutfi, the man who’s been at Britney Spears’ side during her downward spiral. It alleges that he drugged her, took over her finances and controlled the ravenous paparazzi “like a general.” The order was based on a lengthy declaration from Spears’ mother, Lynne, who says Spears met the 33-year-old in October 2007 and “essentially moved into Britney’s home and has purported to take control of her life, home and finances.”
– CBS News, Timeline: Britney’s Meltdown

Britney Spears was in the “bad spotlight” during these days. She bore all of the symptoms of a classic MK-ULTRA breakdown. “Rehab”, “mental evaluation hold” and forced ambulance rides can be code words for “mind control reprogramming”. During these trying times, Sam Lutfi was her MK handler and was instrumental to the meltdown. Oddly enough, Lutfi was also around Amanda Bynes when she broke down and went in forced psychiatric hold.

When attempting to escape MK programming, slaves often shave their heads – a gesture that make them feel they are liberating themselves from their handler’s control. Spears’ breakdown was a failed attempt to escape. Since then, her demeanor has been described as “zombie-like”. She’s been under conservatorship, meaning that every aspect of her life is tightly controlled. Amanda Bynes followed the same pattern.

Therefore, Katy Perry made fun of this extremely sad event. What does she do shortly afterwards? SHE SHAVES HER HEAD. 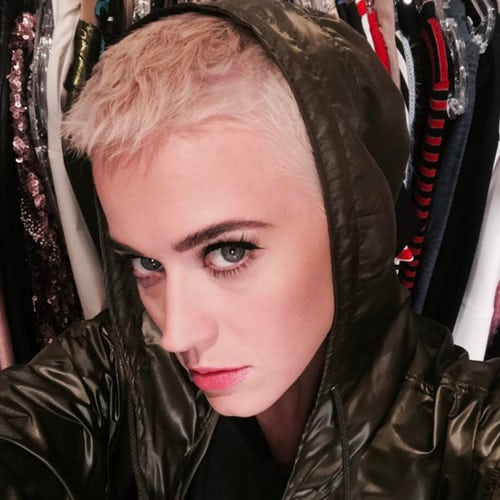 In the twisted symbolism of the MK industry, short blonde hair indicates that the slave has recently been “messed with”. 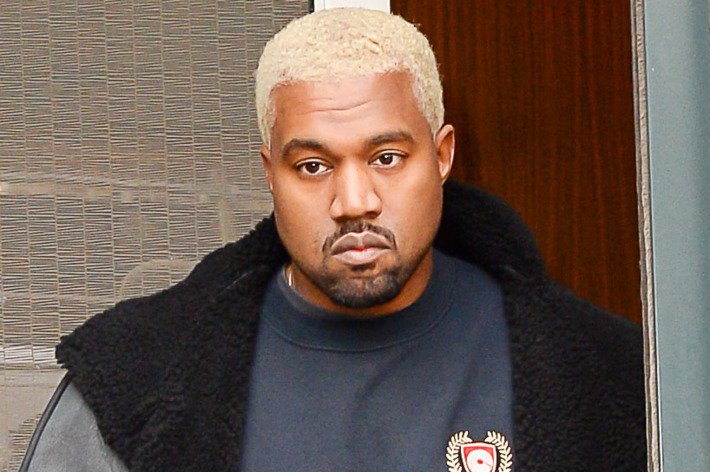 After he was released from his forced hospitalization in November 2016, Kanye West’s hair was blonde. He has yet to make a convincing public appearance.

So, after ridiculing an MK slave, Perry took the form of an MK slave. And she kept posting stuff that angered her fans.

On May 1st, Perry posted a video on Instagram where she replies to a fan who told her that she misses her old black hair. Perry responded by comparing her old hair to Obama – a bizarre answer that managed to offend a lot of people.

Perry’s snarky reply appears custom-made to irritate the very people she was pandering to while she was supporting Hillary. Why would she do that? The press did not like it. Here are some headlines that popped out afterwards.

In short, one can sum up Katy Perry’s current year as “bad press”.

In the midst of all of that, Katy Perry is still appearing in places and releasing new material. And, guess what? Everything is drenched in MK-ULTRA, occult elite imagery. For instance, let’s look at Katy Perry’s attire at the Met Gala. 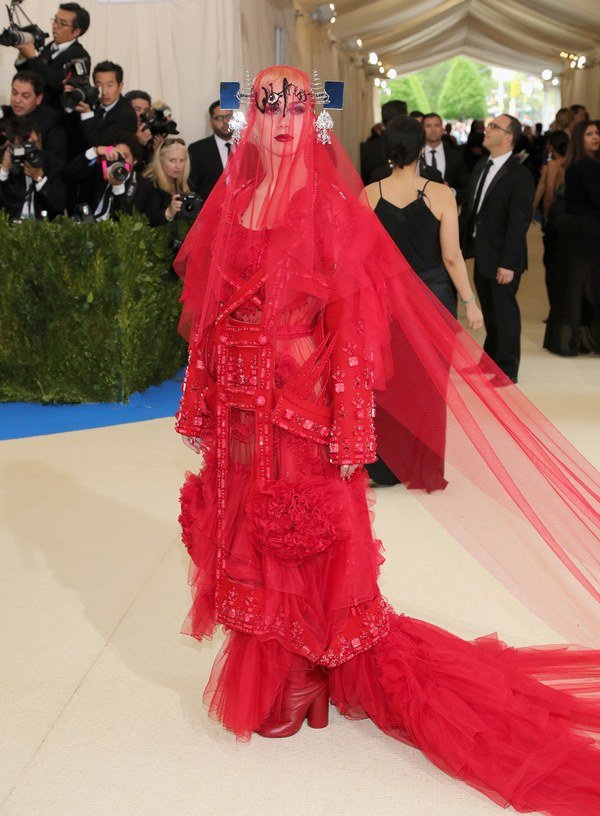 The most “Illuminati” dress of all times?

Created by the elite-friendly Maison Margiela, the dress had all of the components of occult ritual drama. First, it was 100% bright red which, in occult ritual, represents sacrifice. The veil on her head also hints to a ritualistic process. Veils are removed from brides’ heads when they are ready to “consume their wedding”. Being a pawn of the elite is nothing less than a wedding … with the dark side.

The headdress of this ensemble is the most obvious part of it all. It features an eye that covers one of Perry’s actual eyes. In other words, she was a walking-talking one-eye sign. In case you’ve never read any other articles on this site, the one-eye sign identifies pawns of the elite’s industry.

Around the eye is stitched the word “witness”. Eye Witness. On each side of her head are two spiral things and two rectangle things which make it look as if she had horns.

Some observers stated that the “Eye Witness” thing might be promoting her new album. Whatever the case may be, Katy is currently in DEEP Illuminati symbolism.

After the Met Gala, Perry posted a picture on Instagram that managed, once again, to get a whole bunch of people riled up. 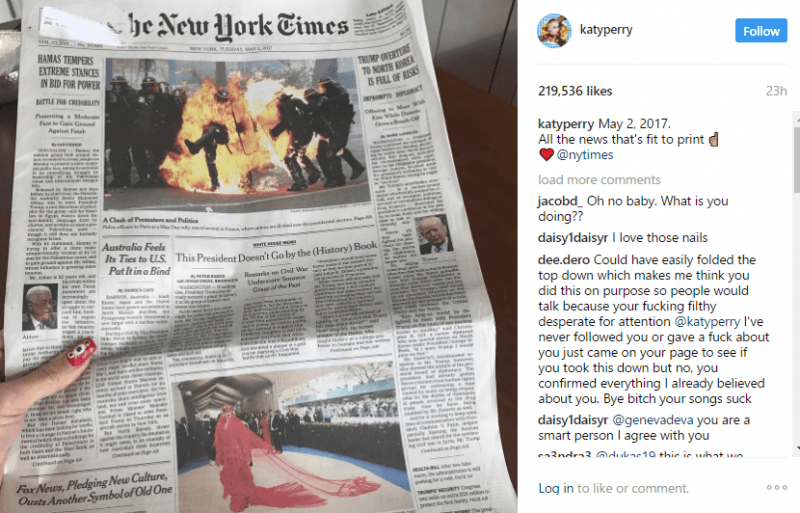 Perry posted a picture of the first page of the New York Times which contained a pic of her wearing the red dress. As a caption, Perry wroteL “All the news that’s fit to print”. However, above the picture of Perry was another picture: A French policeman that was literally on fire. So insensitive. Also, there’s an eye on her fingernail.

Of course, this picture caused people to accuse Perry of being self-centered and desperate for attention. The strange thing about this Instagram post is that the top part of the newspaper could easily have been cropped. Instead, there is actually more focus on the police picture than on Katy Perry. Feels like it was done on purpose to enrage people.

In occult ritual, the period of sacrifice is often associated with hardships and humiliation. As an industry slave, Katy appears to be the current “chosen one” to undergo the bizarre ritual drama that the elite needs to have enacted in real life, across mass media.

At the Met Gala, Katy Perry performed her new song entitled Bon Apétit. As you can probably imagine, the song is not about gastronomy and she is not singing about a nice piece of salmon. It is about sex. More precisely, it is about her being a Beta Kitten – a sexual slave of the elite. Here’s a part of the chorus.

‘Cause I’m all that you want, boy
All that you can have, boy
Got me spread like a buffet
Bon appétit, baby 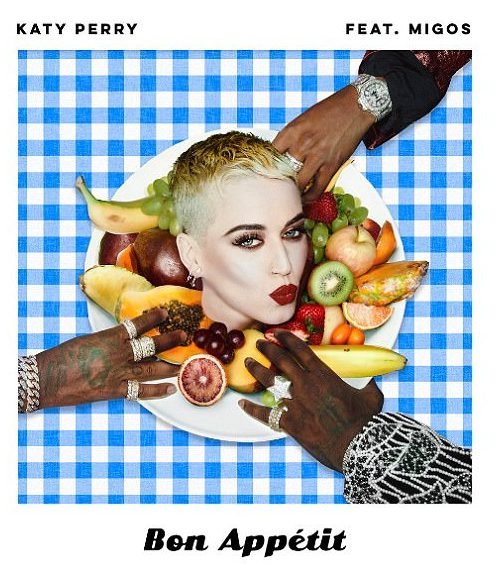 The cover of the single alludes to her being “consumed” by three dudes. She’s the buffet.

Her performance at the Met Gala was highly symbolic.

The Met Gala performance featured Perry being held by the hands of unseen people – a great way of representing MK handlers.

In short, Katy Perry’s string of controversies and bizarre events are not random. They actually follow the same pattern that keeps happening in the entertainment industry. All of the symptoms and the symbolism is there. Katy Perry is deep in the elite’s system and this often leads to bad things. Let’s hope she is not heading towards a total meltdown.

Related Topics:breakdownkaty perry
Up Next