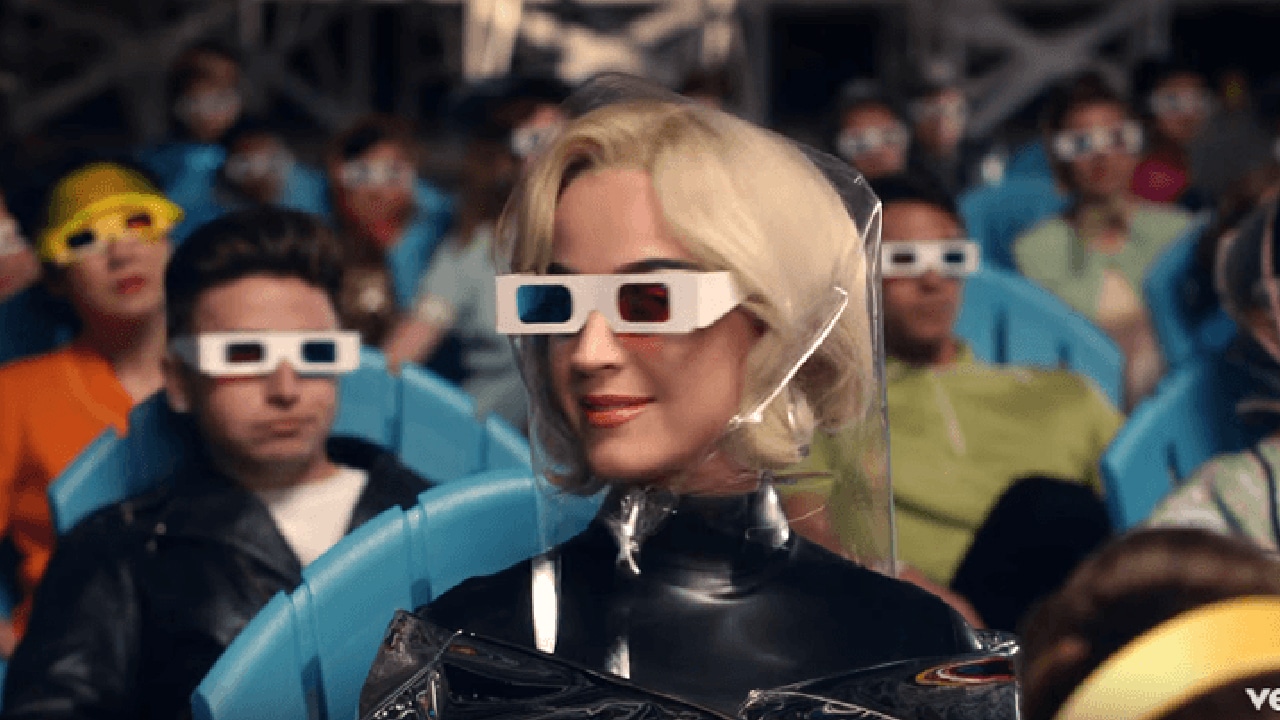 “Chained to the Rhythm” is your typical Katy Perry pop song but with a slightly subversive twist. However, there is intense “doublethink” going on here. Indeed, the “rebellion” presented by the video is actually accepting the global elite’s agenda that has been pushed for years.

After Trump’s election, Katy Perry declared that it was time for “purposeful pop”. Did she have an epiphany? Not really. What actually happened is that Capitol Records, the conglomerate that owns her rights, retooled her image and message to fit the current agenda.

Indeed, for years, Perry’s appeal to teens and pre-teens has been exploited to push all kinds of agendas. And this hasn’t changed. The context, however, has changed. 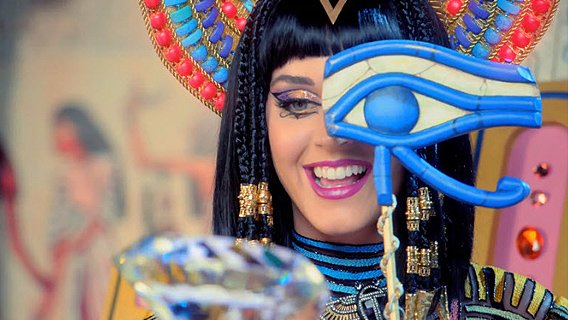 The 2014 video “Dark Horse” was a gigantic tribute to the occult elite and its Illuminati symbolism. Read my article about it here.

In 2017, Katy Perry’s services are once again needed. And, when Katy Perry releases a “political” song, you better believe that the message has been carefully crafted to serve the interests of those who own her. Chained to the Rhythm is exactly that: A calculated “political” message presenting the elite’s globalist agenda as a “rebellion” against the American nightmare that is Trump.

Before I go further, I feel the need to point out that this article is not pro or anti-Trump. It is an objective analysis of a mass media product that was released during a specific political era. As I’ve often stated, the same occult elite is still behind the scenes, no matter who’s in power and still fully controls the channels of mainstream media. So, please realize that, unlike 99% of blogs and news sites out there, I don’t care about political affiliations and my values are not shaped according to a pre-made “liberal” or “conservative” box. I’m simply analyzing the agenda behind mass media. Alright, back to the article.

In Chained to the Rhythm, the United States is compared to a theme park named Oblivia, where “oblivious” people walk around with static creepy smiles on their faces. The rides in the park represent real-life social issues that American people are apparently ignoring because they’re “living in a bubble”. This is coming from Katy Perry who was also in this video: 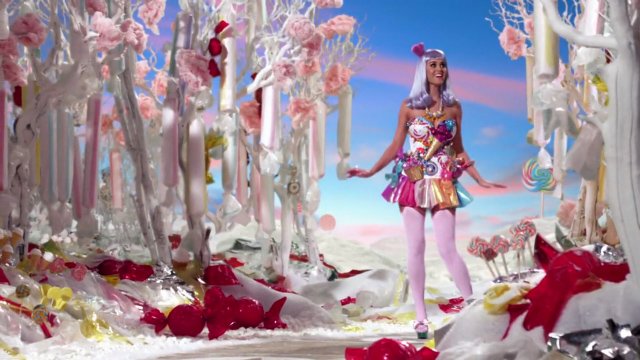 Chained to the Elite 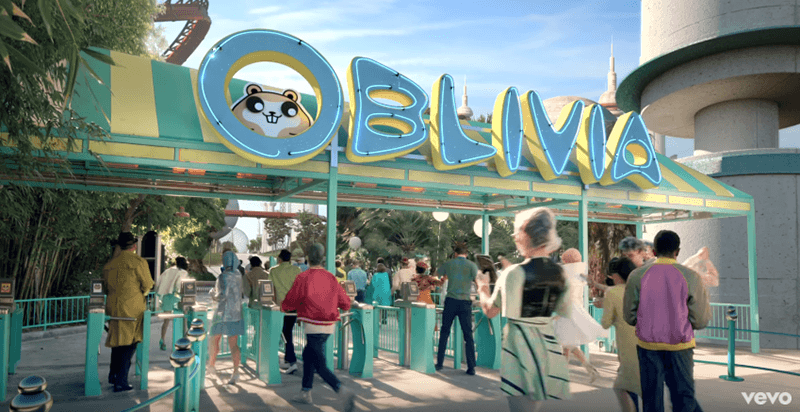 The video takes place in a theme park named Oblivia. The logo is a hamster, a rodent who is known to live in a cage and exercise on a spinning wheel that leads to nowhere. This is how the elite perceives the masses.

In the park, people are too absorbed with their social media statuses to understand what is truly going on around them. 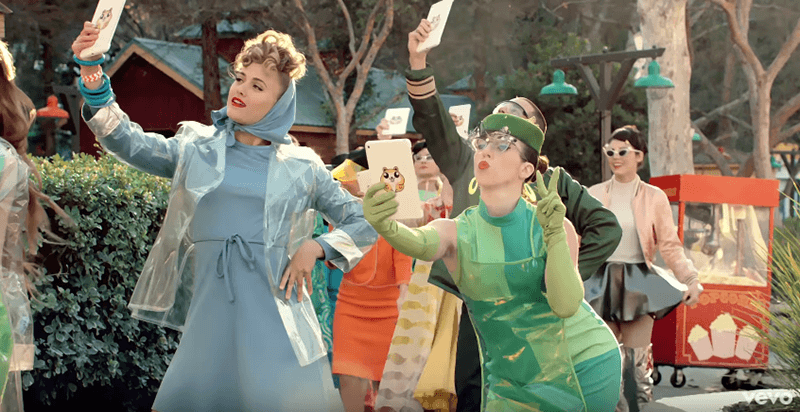 The park is filled with self-centered people who take selfies with their hamster devices.

Katy Perry is right. People who take selfies are self-absorbed jerks. BUT WAIT A MINUTE. 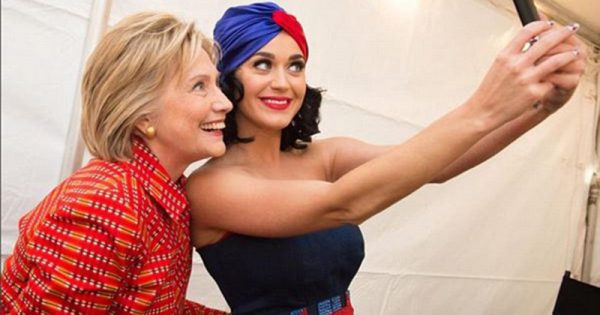 ANYWAYS, people in the park are, pretty much, brainwashed drones who do as they are told. 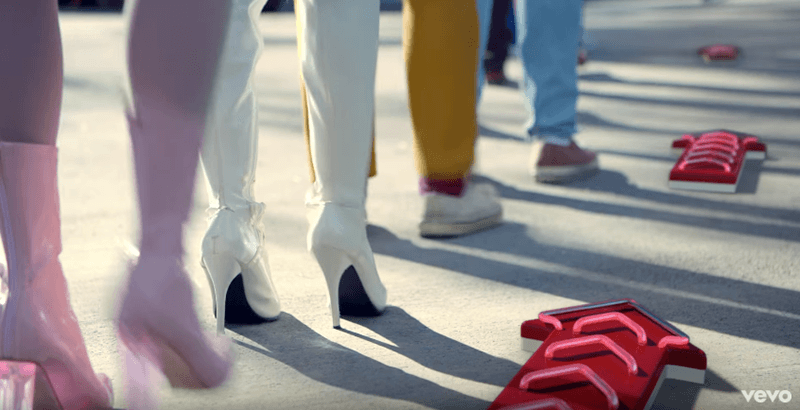 Guests follow arrows the same way the masses follow mass media towards whatever they are supposed to think and do and this point and time. 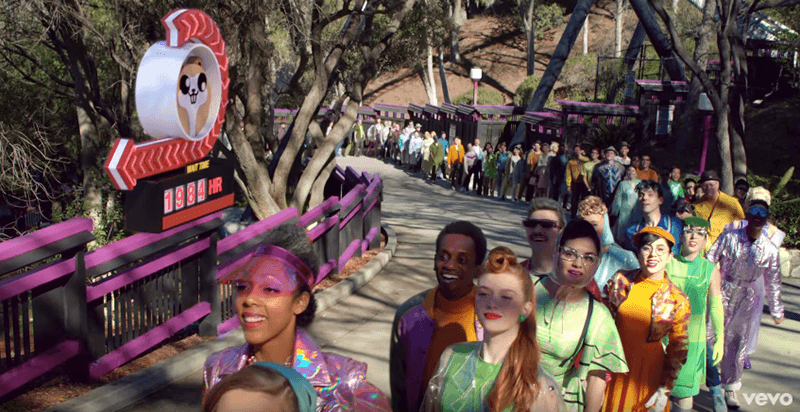 Wow, Katy Perry’s got some edgy, “wake up to the truth” commentary going on. It’s like she’s on our side now! A truther! Well, not really. What is basically happening is that the entire “truther” viewpoint is being co-opted by mass media to sell the elite’s agenda.

In Oblivia, Katy visits several rides that allude to issues happening in America and the world. While they appear fun, they are actually harming those who ride them. 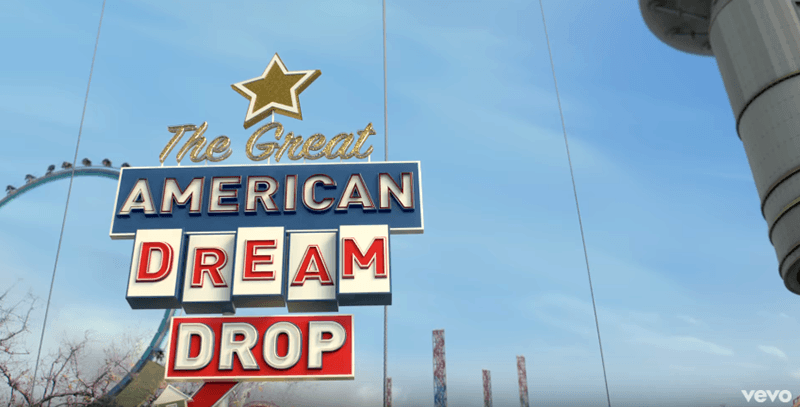 One ride, named “The Great American Dream Drop”, has a grave underlying meaning. 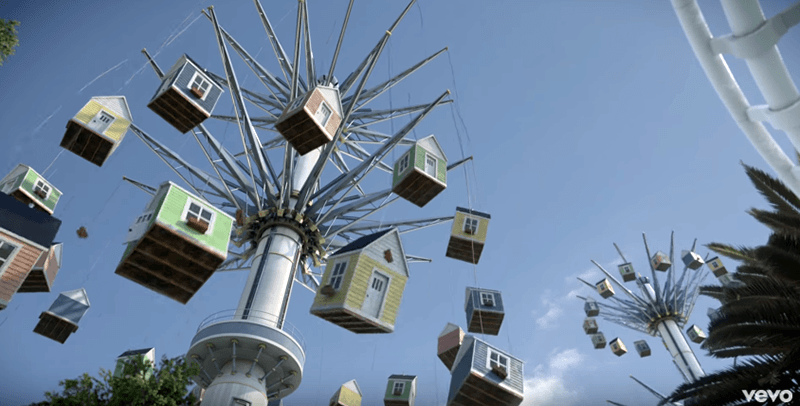 Happy little couples go inside happy little houses and are lifted into the air.

Once in the air,  the houses suddenly drop back down. Is this a reference to banks taking families for a “ride” by lending them money to buy homes using shoddy loans? This scam led to the massive housing crash of 2008 which caused trillions of dollars to be sucked from average Americans’ pockets towards the financial elite.

When Katy Perry performed Chained to the Rythm at the Brit Awards and the Grammys, the sets symbolically referred to the killing of the American dream. 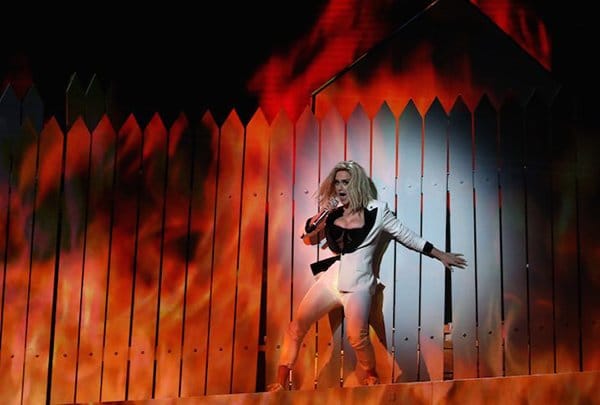 At the Grammy Awards, a typical, white-picket-fence home was literally on fire. Was Perry predicting a period of major turmoil for the masses? 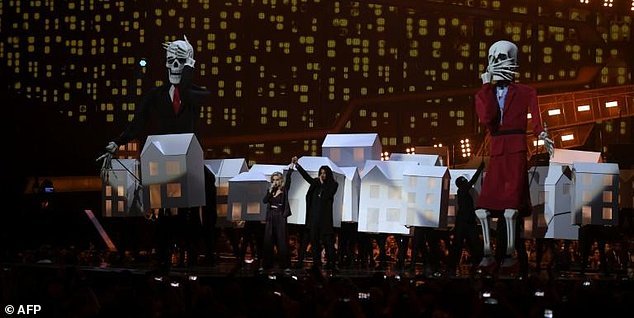 At the Brit Awards, homes got off the ground and started moving around, as if under the spell of giant skeletons (who probably represented Donald Trump and Theresa May).

Perry’s lyrics take aim at regular people living in their regular homes, telling them they are too “comfortable”.

Katy is right, we should follow her lead and not live in a “comfortable bubble”. BUT WAIT A MINUTE. 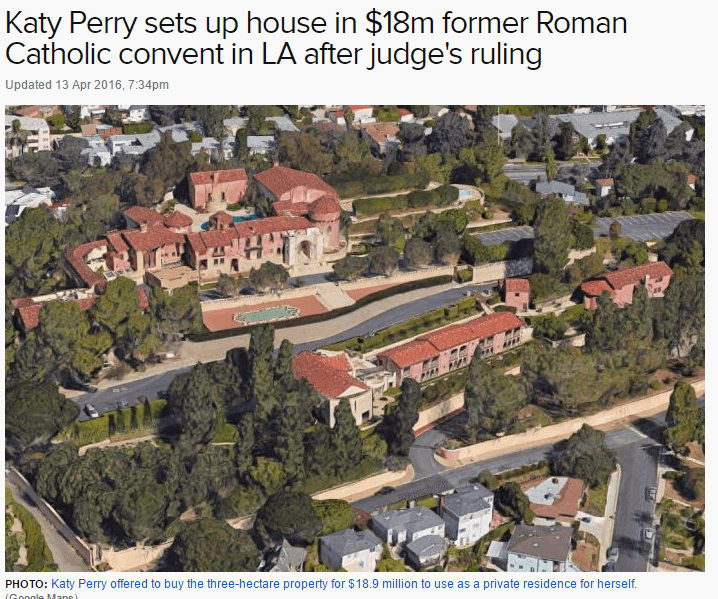 Katy recently bought an ENTIRE CONVENT to live in.

ANYWAYS, other rides in the video allude to other social issues. 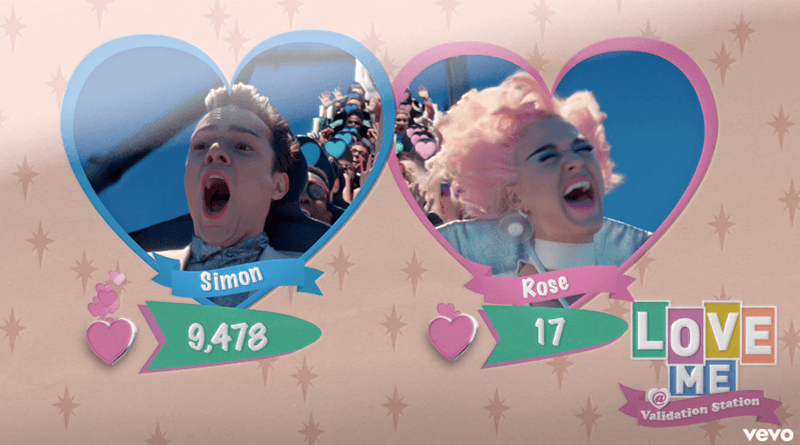 The roller-coaster ride features a “validation station” named Love Me.

As people take place in the ride, we realize that men sit on one side and women on the other. Why is there a separation? Is this a reference to sexism in society? When Simon and Rose go through the “Validation Station” (a commentary on how people crave social media “likes” to feel validated), Simon gets nearly all of the votes. This seems to tell us that men have an unfair advantage over women, especially when it comes to social media.

BUT WAIT A MINUTE.

ANYWAYS, the next ride directly takes aim at a specific Trump policy. 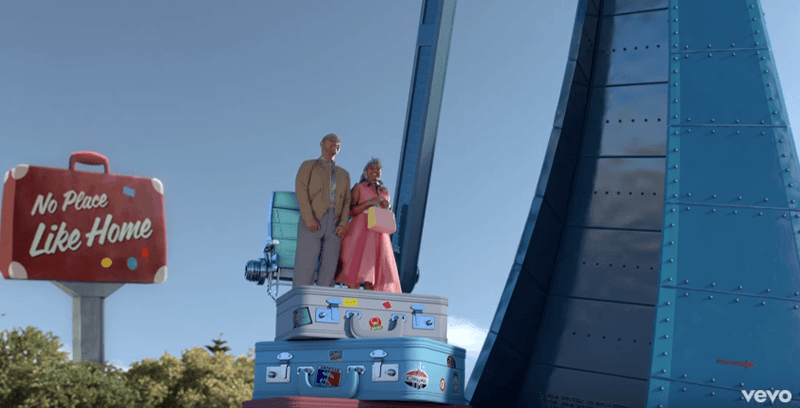 The ride “No Place Like Home” is a commentary on Trump’s policy of deporting illegal immigrants. Did this couple enter Oblivia illegally? 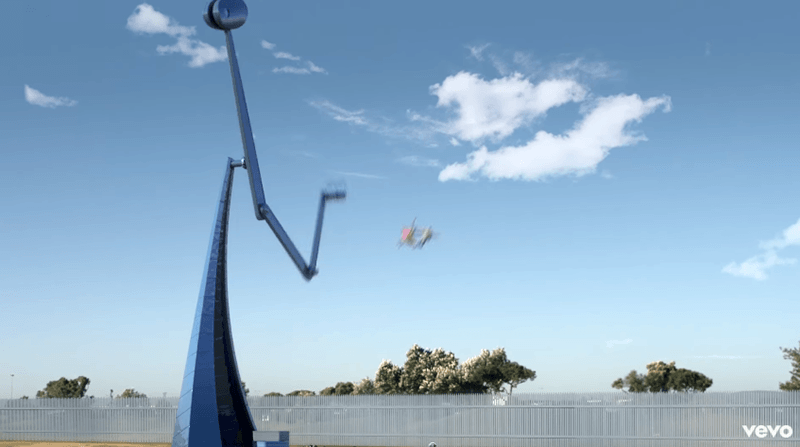 The couple is then ejected far away, above a fence – a reference to Trump’s proposed wall.

Other rides allude to issues that were part of American history for decades. 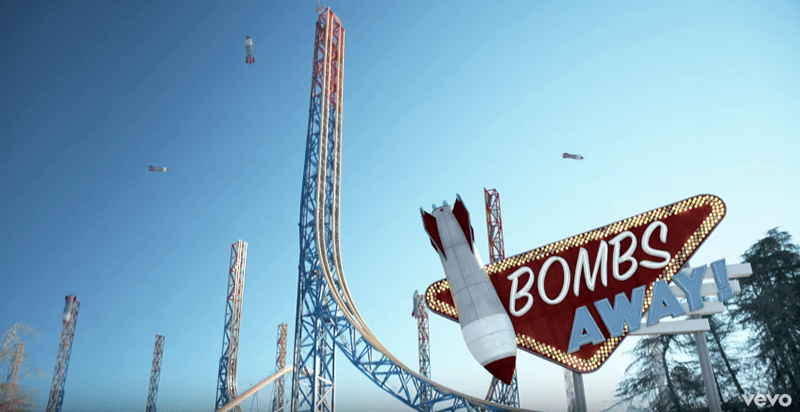 The ride “Bombs Away!” consists of missiles flying around.

The ride alludes to the American people being oblivious to the various wars being carried out by their government around the world. Katy is right. War is bad and we should protest against it. BUT WAIT A MINUTE.

In the 2012 video “Part of Me”, Katy enlists in the army and goes to war. Why? Because her boyfriend cheated on her. Makes sense.

Part of Me was released five years ago. Perry was used as a recruiting tool by the army in order to reach young people. Joining the army was presented as a solution to a bad relationship (read my article about it here). But this is now. 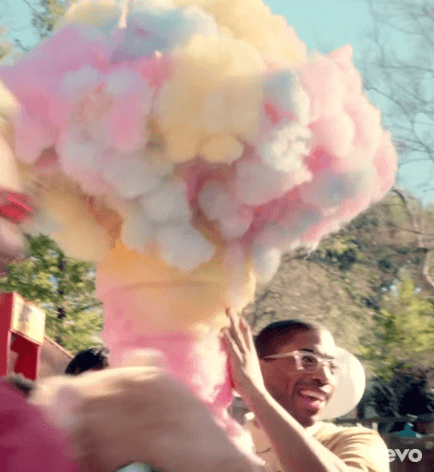 This guy is happily walking around with a mushroom cloud in his hands. He’s oblivious to the nuclear threat around the world.

The attraction named “Inferno H20” is rather perplexing. 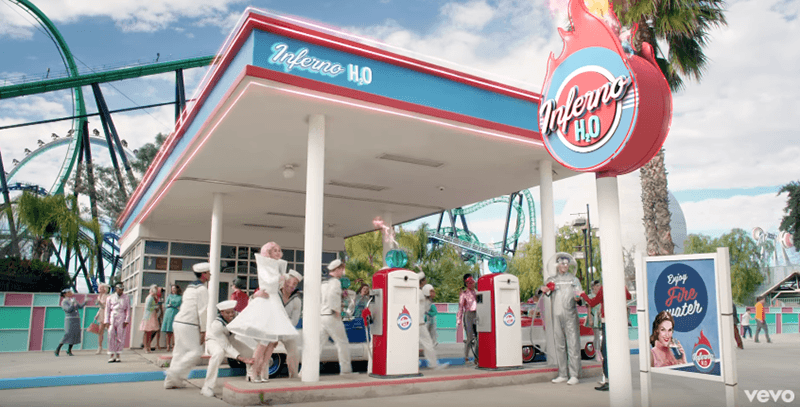 It is basically a gas station that dispenses “Fire Water”.

In this attraction, Katy is given a glass of water that catches fire. Is it a comment on the controversial practice of water fracking? Does it refer to the looming water crisis that is on the verge of causing conflicts around the world? Does it maybe refer to the environmental disasters caused by the exploitation and transportation of petroleum? The message here is rather vague, not unlike other scenes in the video.

In the evening, guests are shown a movie on a TV screen, the same way Americans spend their evenings watching TV. 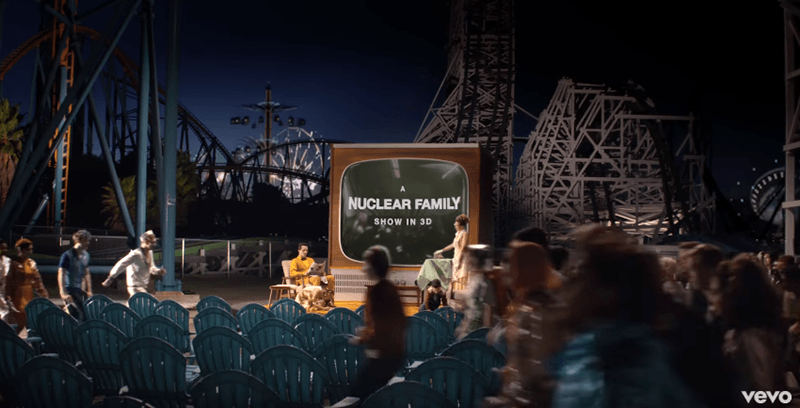 The film is called “A Nuclear Family”. 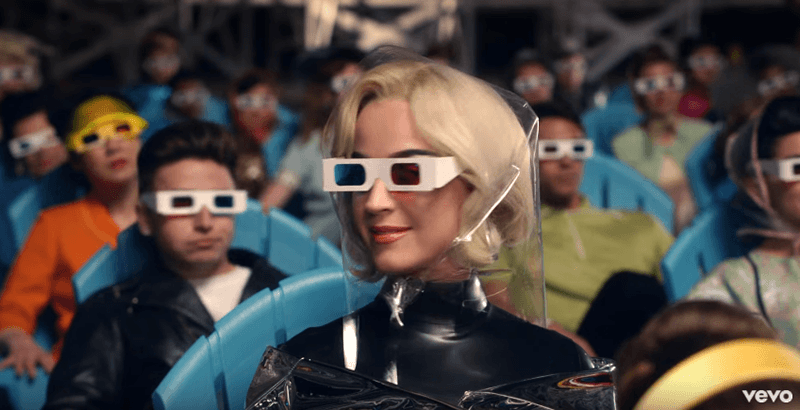 The masses (including the douche behind Katy) put on their 3D glasses and enthusiastically absorb the propaganda.

If we follow the logic of this video, people are being brainwashed by watching a movie about a “nuclear family” which is defined as:

“a social unit composed of two parents and one or more children.”

Why is this portrayed as bad? Yes, in today’s society, there are all kinds of family structures and they are all as valid and important as any others and blah blah blah. That being said, why isn’t the “nuclear family” as celebrated as other kinds of families? Why is the video portraying this family as something to rebel against? Is it because, maybe, the elite has been hard at work destroying traditional family values in order to debase the masses and make them more malleable? Don’t get me started.

Then, Skip Marley comes out of the screen as if he was that girl from The Ring. 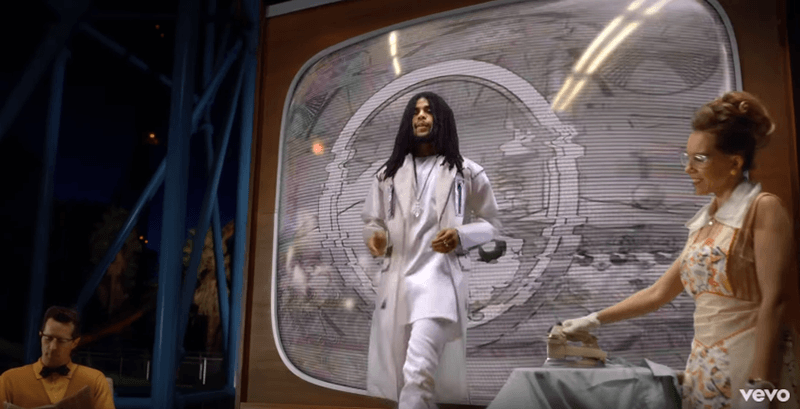 Move over lame nuclear family, Skip is coming through!

Skip sings about rioting against those in power.

“It is my desire
Break down the walls to connect, inspire
Ay, up in your high place, liars
Time is ticking for the empire
The truth they feed is feeble
As so many times before
They greed over the people
They stumbling and fumbling and we’re about to riot
They woke up, they woke up the lions”

There is something ironic about this scene. Skip literally emerges out of the TV screen that is used to brainwash people. In other words, he IS mass media. Compliance with the agenda is disguised as rebellion. That is some next-level double-think.

Then, Katy Perry has an awakening. 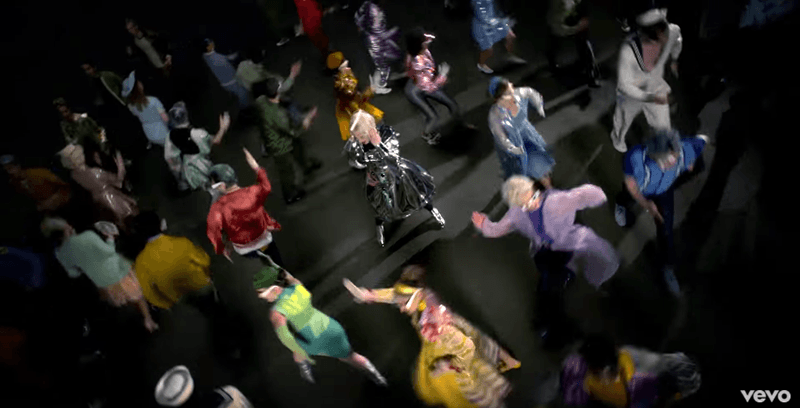 After her awakening, Perry looks around while the oblivious masses run circles around her. She is so WOKE now. Wow. She knows so many truths now. 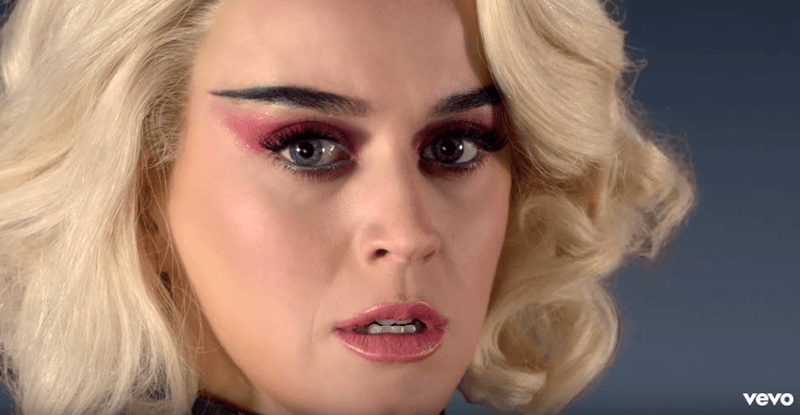 The video ends with Perry looking at the viewers with a concerned look as if saying “YOU SHOULD HAVE VOTED FOR HILLARY”.

Chained to the Rhythm is what I call “propaganda 2.0”: The elite’s agenda presented as a “revolution”. It takes tropes from “truther” films such as They Live – where only a select few see the truth while the rest of the world is being controlled – to actually sell a political agenda.

As stated numerous times on this site, the ultimate goal of the elite is to create a one-world government, complete with a single currency and a single elite ruling it. By creating specific “issues” and emphasizing solutions fixing these issues, the global elite is creating a fully integrated world system where social and economic policies transcend national borders to be decided on a global level. The refugee crisis, the environment, the economy, terrorism and countless other issues are being used to introduce New-World-Oder-friendly policies on a global level. This program has been championed for years by George Soros and his extremely powerful organization named Open Society.

This is what Chained to the Rhythm is truly about. Katy Perry has been, for years, a pawn of the elite, and this is still going on now. Does that automatically mean that we should all fully support everything Trump does? Of course not. The entire message of this site is to be constantly vigilant. Believe it or not, you don’t need to fully adhere to a political party’s entire platform. You can actually be a rational person and decide for yourself which policies you agree and disagree with. If Trump goes ahead and promotes increased privacy violations, police-state tactics, racial tensions or anything that reduces freedom, you better believe that I won’t be supporting any of this.

However, one thing is for sure, mass media is still in the hands of an elite with a specific agenda. And, even when it appears to be promoting freedom, it secretly wants you to be … chained to the rhythm.

Related Topics:katy perry
Up Next

“That Poppy” : The YouTube Star Under Illuminati Mind Control