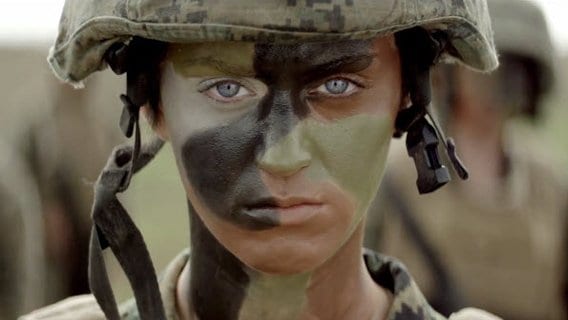 In her music video ‘Part of Me’, Katy Perry ditches her wigs and latex dresses to put on a Marines uniform. While some might find this style change “refreshing”, the video for ‘Part of Me’ has a very specific agenda: To entice young people to enlist in the military. We’ll look at how ‘Part of Me’ is a three-minute long advertisement to recruit new soldiers for the U.S. military.

Katy Perry is usually known for wearing blue wigs and sexy dresses, but she gives it all up in Part of Me. Yup, watch out terrorists, Katy Perry is an army girl now. While “pop culture observers” welcomed Katy Perry’s image change, qualifying it as “refreshing”, most missed an important fact: In Part of Me, Katy Perry is used to push yet another agenda of the elite – the recruitment of young people into the military. If we look at it objectively, Part of Me is, in fact, a three-and-half-minute long “Join the Military” advertisement disguised as a music video. It contains all of the components found in regular TV ads for the Marines and any other army-related ads: cool high-tech war machines, excitement, and action, being “All You Can Be” and so forth. But most importantly, it presents the military and, by extension, war, as the perfect escape from the bummers of regular life.

The video was shot at an actual U.S. Marine base, using actual Marines, which means that the video is truly a “sponsored message” from the Marines. By appealing to young people using singers they look up to and themes they can relate to, the U.S. military is looking to address an important issue: Getting more young people to enlist. There is indeed a growing need for fresh blood in the military as the U.S. government and other Western countries are putting intense pressure on so-called “Axis of Evil” regional powers such as Iran and Syria. The numerous military expeditions of the past few years (Iraq, Afghanistan, Libya), and increasing calls to bring home enlisted soldiers who have done multiple tours of duty means that as the U.S. prepares for upcoming conflicts, new soldiers are needed to enlist and be shipped abroad. Instead of paying for a 30-second TV commercial, military marketing specialists probably realized that they could get better results by investing in the music video of a star that is popular with teenagers. While regular “Be All You Can Be” TV commercials were effective in the past, today’s young generation watches less TV and more YouTube. So why not use pop stars who get hundreds of millions of YouTube views and who are already used to push other aspects of the elite’s agenda?

Not a New Concept 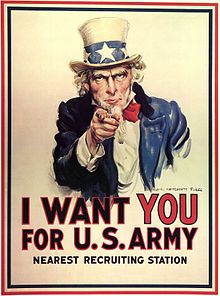 A 1917 Uncle Sam poster used to recruit soldiers during WWI

Governments have always used the most advanced forms of mass media advertising to entice citizens to enlist in the armed forces. During World War I, the face of Uncle Sam was plastered all over the United States in order to recruit new soldiers. However, as the years went by, and television made its appearance, posters of the bearded fellow pointing at you with a stern look somewhat lost its effectiveness.

During the 1950s, although mandatory drafts were in full force, the military still looked for opportunities for good PR. When Elvis Presley, the hottest and most controversial artist of the time, joined the army as a regular soldier, the press was given “full access”, and were even allowed take pictures of him in his drawers while getting weighed in. 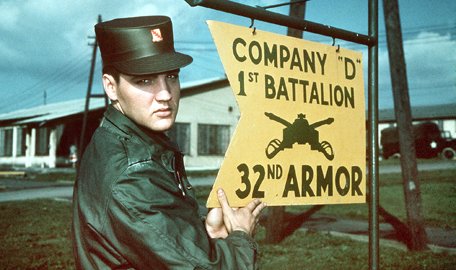 Elvis’ career as a soldier was highly publicized, as countless pictures of him flooded mass media.

Elvis’ immense charm, charisma, and popularity gave the army great visibility, successfully enticing young people of the rebellious “Rock’n’Roll” generation to be interested in the military.

Since the 1950s, marketing techniques have improved in both efficiency and sophistication. In fact, today, the best advertisement often parades itself as no advertisement – in the advertising industry, messages are known to be received more effectively when indirectly reaching an audience that believes it is being entertained. To achieve this, celebrities and pop stars are often used as vehicles to reach the minds of young people with specific messages without them even realizing it. Katy Perry’s Part of Me is an example of this technique, as nowhere in the video does it state that it is an advertisement for the U.S. military. Perry’s video was simply used by the military to reach its target audience–teenagers approaching the age of enlistment–but the whole thing appears as if it was a “creative” decision of Katy Perry the Artist.

Watching Part of Me immediately reminded me of the Simpsons episode where Bart and his friends were chosen by a producer to form a boy band. The group’s hit single was Yvan Eht Nioj, which was “Join the Navy” in reverse. It was later discovered that Bart Simpson’s group was used by the Navy to push subliminal messages to young people in order to get them to become soldiers. 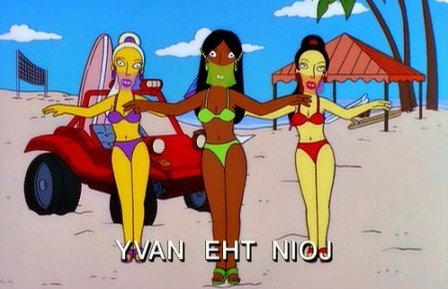 While Perry’s video relies on overt imagery rather than subliminal messages (as far as I know), Part of Me is based on the same agenda as portrayed in the Simpsons: To reach teenagers using the great appeal of pop stars. Let’s look at the most important scenes of the video.

The video begins with a concept most teenagers can relate to: Heartbreak. Katy catches her boyfriend kissing another woman. so she barges in and breaks up with him.

Katy walks away from her douchebag boyfriend. Although the video is basically a commercial for the United States military, it begins with a relationship-related scene in order to make the video relatable and to give it an emotional element.

Katy then drives to a gas station. She is very mad, confused and impulsive, so she obeys to the first advertisement she encounters. I bet marketers would love to have more people like Katy.

When Katy reads this actual US Marines sticker, she is immediately sold.

When facing heartbreak, some people might try to feel better with a chocolate fudge sundae or maybe a nice walk around the block. But in Katy’s case, she joins the US industrial-military complex and gets trained to fight guerrilla warfare abroad. Don’t get me wrong, I have respect for soldiers in the military, but I think a life-changing decision like joining the Marines should not be made in a moment of emotional frenzy.

Nevertheless, Katy makes this decision, cutting her hair in a boyish fashion and trading her Blackberry for a Marines uniform.

Katy is now the property of the U.S. military complex.

The rest of the video is very similar to armed forces commercials seen on TV where big guns, big machines, and scenes of hardcore combat training are presented in a dynamic matter to appeal to young people who are bored with their lives. The lyrics of the song are cleverly mixed with the images of the video to make the advertisement even more effective. For instance, when Perry sings “I just wanna throw my phone away, Find out who is really there for me”, she is seen with her fellow soldiers, implying that her Marines buddies will never let her down.

Katy burns a letter from her boyfriend (representing her old life) while hanging out with her Marines buddy. He’s REALLY there for her. The camaraderie between soldiers is an important selling point to help recruit personnel and is heavily promoted in this video.

When Katy sings: “I fell deep and you let me drown, But that was then and this is now … Now look at me”, she is shown firing a rifle as if it was a great accomplishment. Yep, look at her:

Katy is now in a military base, shooting a rifle and will most likely be shipped to a war zone in the near future. Take THAT cheating boyfriend, that’ll show you!

During the bridge of the song, Katy sings “Now look at me, I’m sparkling, A firework, a dancing flame, You won’t ever put me out again, I’m glowing, oh woah oh”. During that time she is shown patrolling a mock Middle-Eastern village, used for real-life military training for guerrilla warfare simulations. This is another clever association between the song’s lyrics and the images in the video, provoking a positive association between the two.

Katy, you say you’re “sparkling” but you’re being trained to fight guerrilla warfare in the Middle East, which is known to be extremely bloody, violent and often involves civilian casualties. So, yeah, I’m not sure that “sparkling” is the best word to describe your situation.

Later in the video, the positive and uplifting words of the chorus are mixed with all-out war scenes involving soldiers running, tanks rolling and helicopters flying. There’s definitely some cognitive dissonance here because, in case some people don’t know, war is NEVER positive nor uplifting. It is ALWAYS terrible, violent and horrifying. However, in order to recruit new soldiers, advertisers need to make the whole “military experience” appear wonderful.

Katy is now caught up in the business of war, where death, mutilation, horror, and trauma can get in the way of conquering Third World countries for resources and power. But hey, at least Katy’s douchebag boyfriend isn’t there!

So, in short, discovering that her boyfriend is cheating on her has Katy Perry enlist in the Marines, to be trained for combat, and, ultimately, be used as cannon fodder in conflicts she likely doesn’t fully understand. The elite seems to be looking for lost youth to fight their wars. Was Part of Me an Illuminati-sponsored message to find new recruits for its armed branch, the U.S. military-industrial complex?

A single eye above the trigger of a gun indicates that this military-themed video is a product of the elite’s agenda … who happen to have a bunch of wars planned in the coming years.

Watching a bit of “international news” is enough to make one realize that there is currently a lot of pressure on “bad” countries such as Syria, Iran, and Uganda and that public opinion is being prepped for new military conflicts. The prospect of future wars, along with the countless existing warzones around the world, is generating a great need for new soldiers military in the U.S. and other Western countries. Since military drafts are no longer an option, new and innovative ways are being used to reach the army’s target audience (teenagers) and to get them interested in enlisting in armed forces. Katy Perry’s Part of Me is an obvious Marines recruitment advertisement disguised as a music video, with the Marine’s “cool” weaponry, intensive training and soldier camaraderie all presented in a dynamic and appealing matter. The military and war are presented as ideal escapes from life’s bummers, like a cheating boyfriend, and geared to appeal to a generation of bored teenagers. But is war really the perfect way to forget about a bad relationship? Go ask a war veteran.