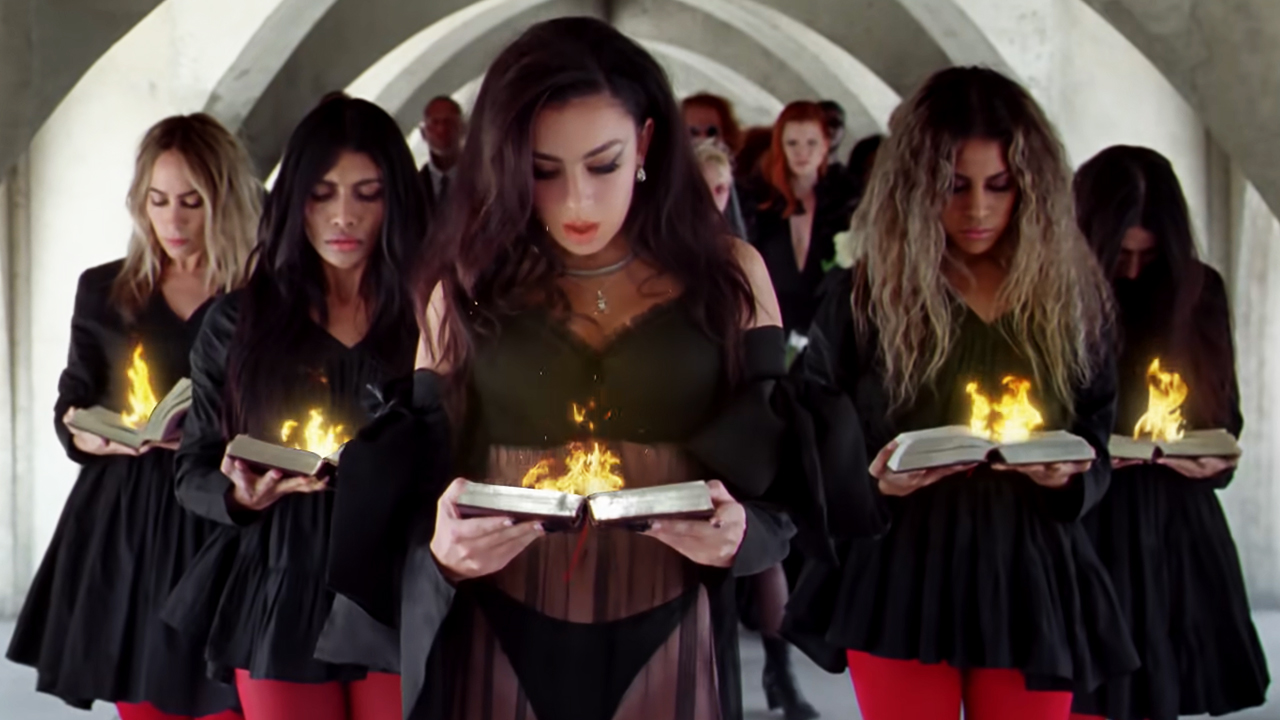 For years, Charli XCX had been working relentlessly to move up in the music industry. Since 2013, the English singer and songwriter released five albums to critical acclaim while winning industry trophies. However, despite her relative success, Charlie XCX still could not be called a “major pop star”. Indeed, the proverbial spotlight did not shine on Charli as intensely as others pop stars.

So what was missing? Looks? Talent? Hard work? No. She had to sell her soul to the devil. And not figuratively. And that’s exactly what she did. 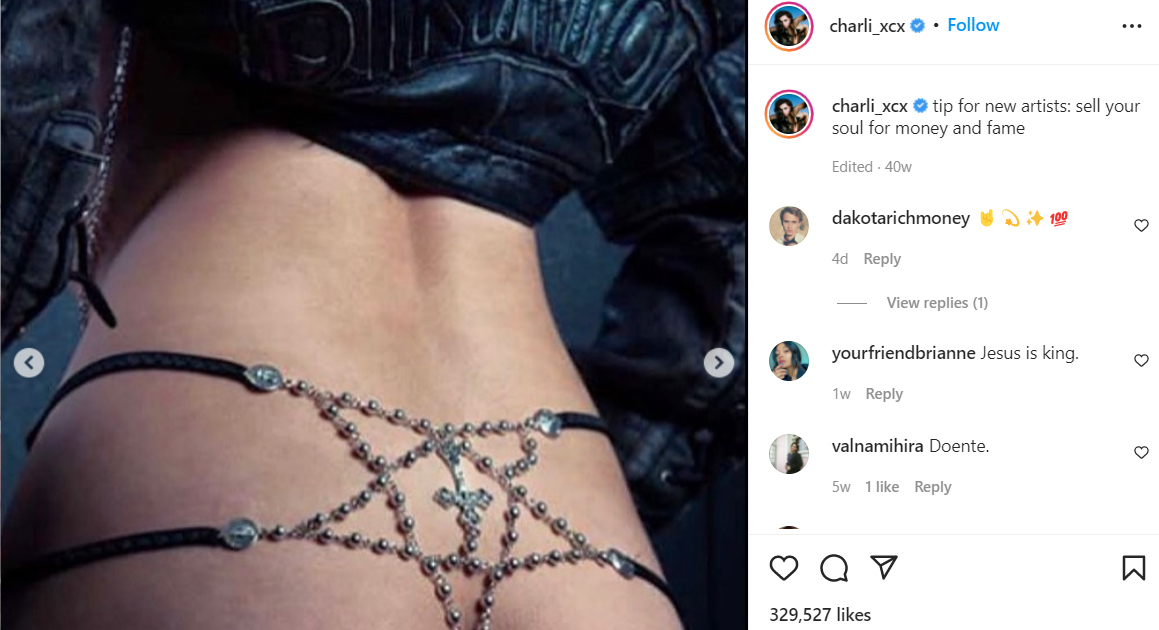 In a rather blatant Instagram post, Charli writes “tip for new artists: sell your soul for money and fame”. Along with this caption are symbolic pictures, including this satanic g-string. 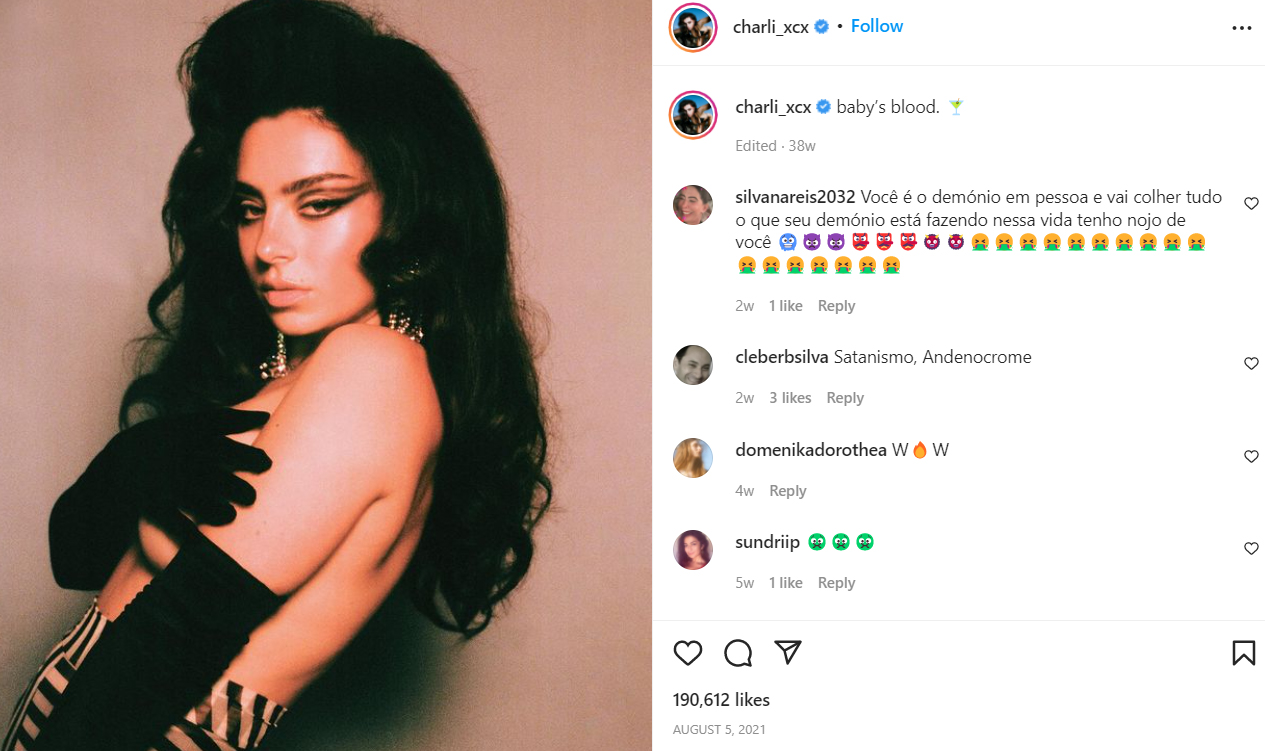 In another post, Charli writes “baby’s blood” with an emoji representing a martini glass – implying that this blood is being ingested. This is a reference to the occult elite’s favorite obsession: Consuming human blood and flesh. 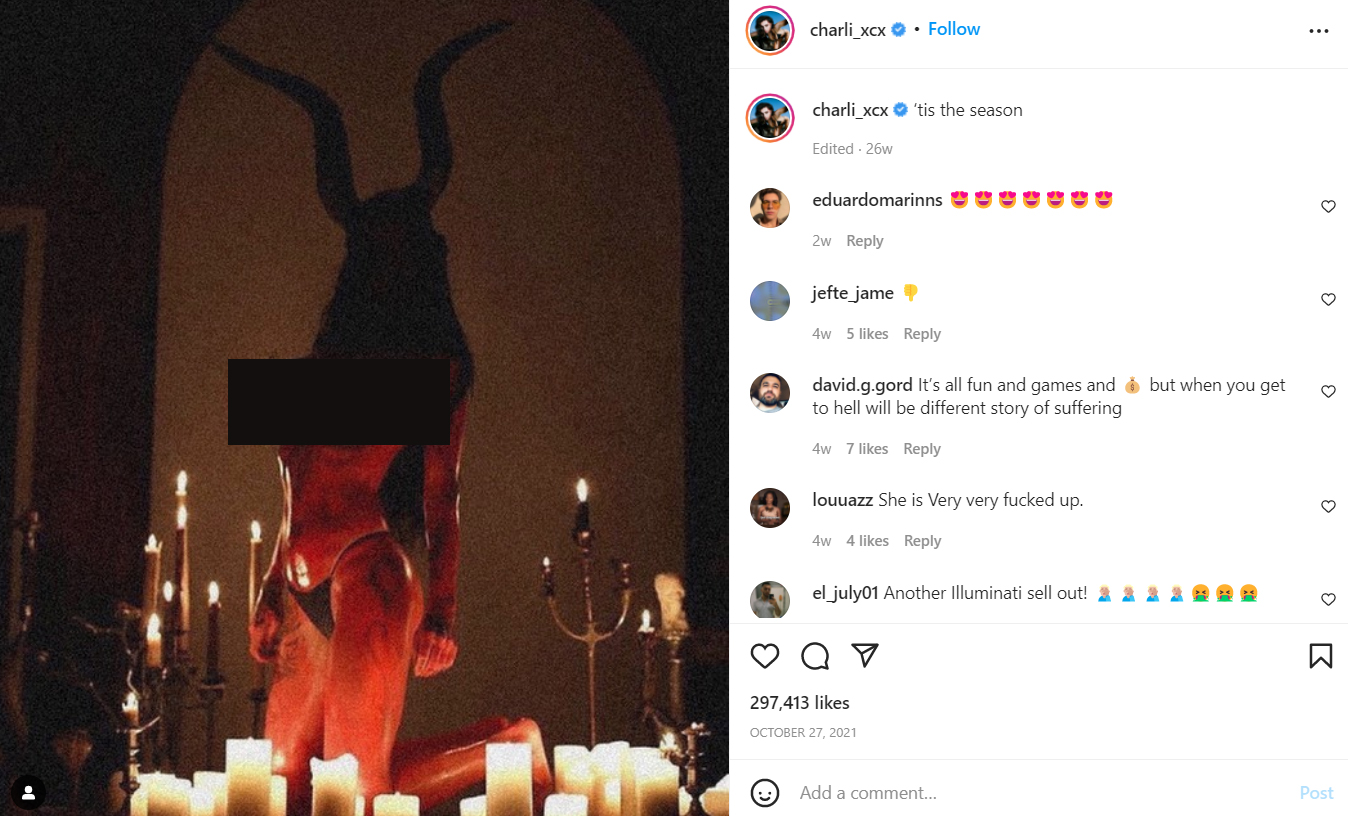 Shortly before Halloween, Charli posted a pic depicting a satanic blood ritual. Because that’s what they actually do around this time of year.

In occult circles, the initiation of a candidate involves a symbolic death and rebirth. This is exactly what Charli’s album Crash is about. 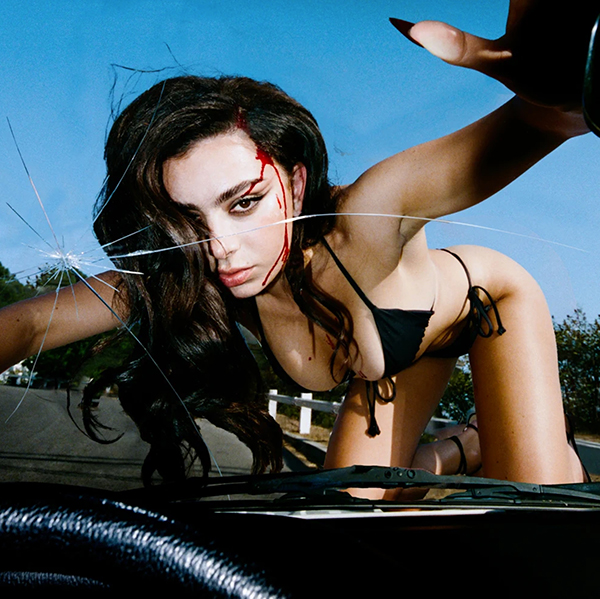 The album art of Crash depicts Charli being “killed” in a car crash. The subtle one-eye sign created by her strategically placed hair indicates that this is all occult symbolism. 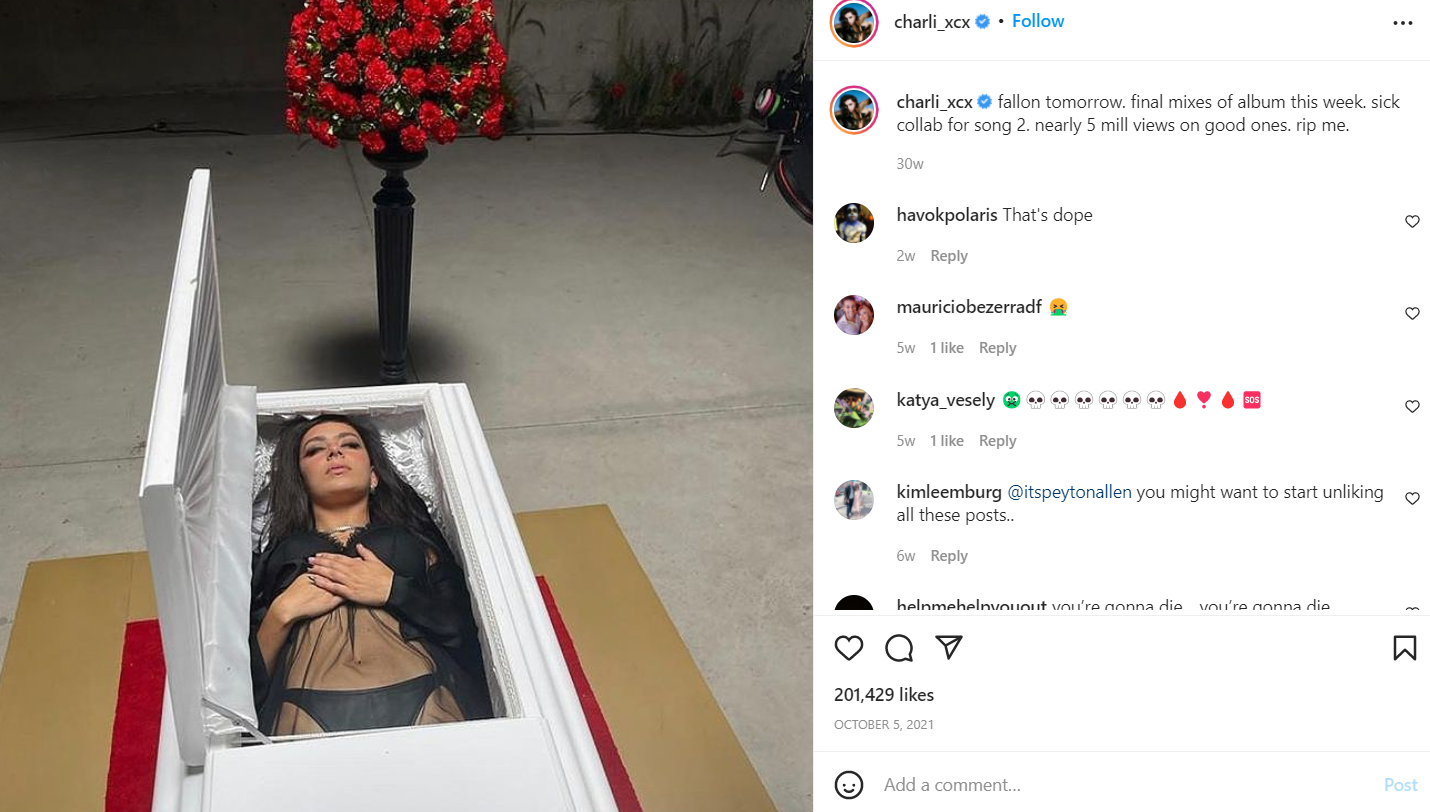 In a post celebrating her success, Charli posts a picture of her laying in a casket.

Upon the release of Crash, a slew of music videos was released. Two of them stand out from the lot and they happen to be highly symbolic. Here’s a look at them.

The lyrics of the single Good Ones are about Charli wanting to end a healthy relationship because she craves evilness. These lines sum up the song:

While the song appears to be about Charli being attracted to bad boys, the video indicates that the “relationship” Charli refers to is actually … spiritual.

The entire video takes place at a funeral with people mourning and stuff. Then Charli emerges with her witch coven or something.

While everybody’s wearing black, Charli and her girls also wear red – the color occultly associated with initiation and blood sacrifice. They’re holding burning Bibles, an image that sums up the satanic subtext of this video. 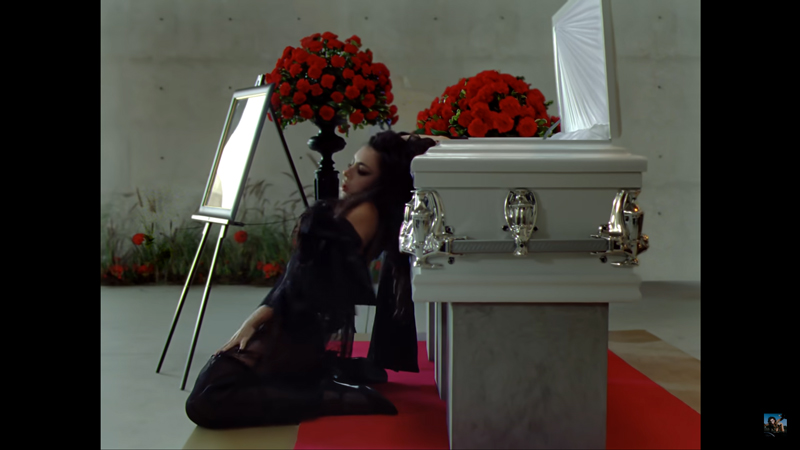 Throughout the video, Charli appears to be extremely turned on by the dead body. This bizarre mix of death and sexuality is in line with the elite’s sick culture of death. 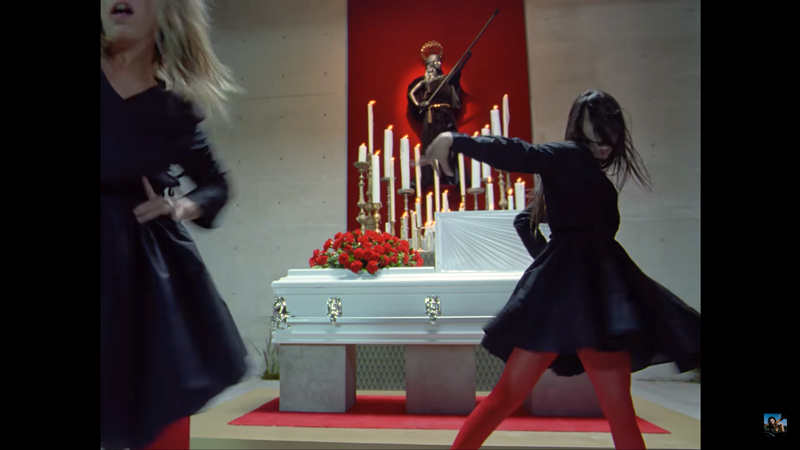 Behind the casket is an interesting figure. If this was a “regular” church, one would probably see a crucifix. However, if you look closely, that’s not Jesus at all. The figure appears to represent the Roman soldier who speared Jesus while he was crucified … to make sure he was dead. 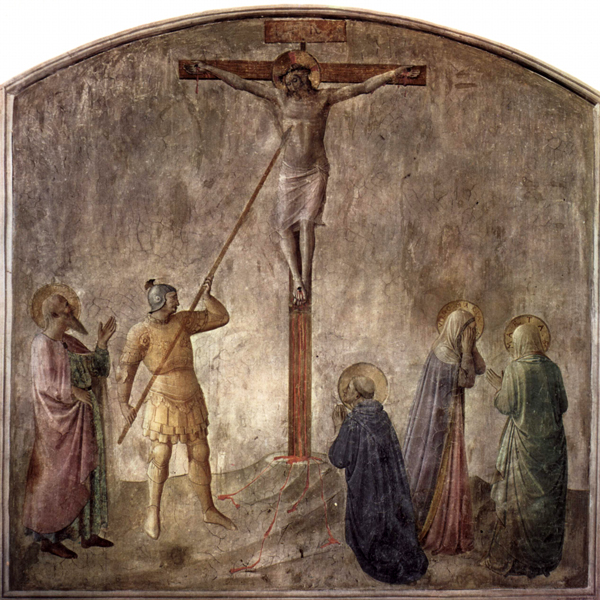 A fresco by Fra Angelico showing the lance piercing the side of Jesus on the cross.

Satanic black masses are all about the reversal and perversion of Christian rituals and symbols. Enshrining the guy who pierced Jesus instead of Jesus himself is a good example.

Lurking in the background is a weird-looking priest. His eyepatch turns his face into a one-eye sign, again hinting at this being occult elite garbage.

In this rather grim scene, Charli and her girls get overtly excited by the burial hole. Culture of death. 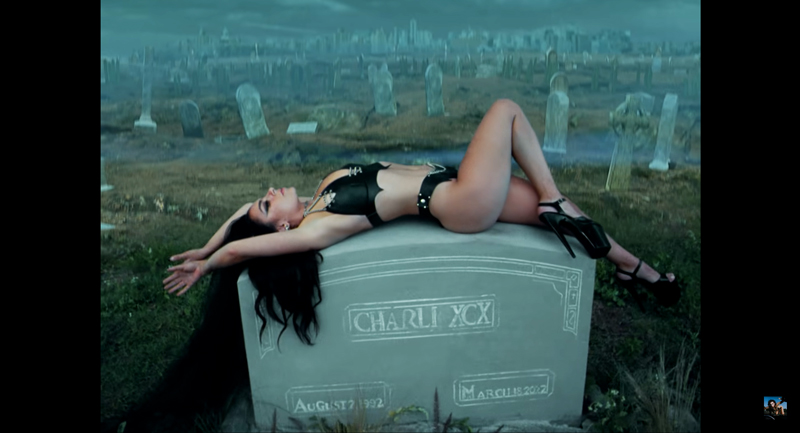 At one point, Charli is seen laying on her own tombstone. The burial date is March 2022 which was the release date of her album.

In short, Good Ones is all celebration of death at a satanic black mass. If you believe I’m going a little far with this interpretation ritual, you should maybe check the alternative video. 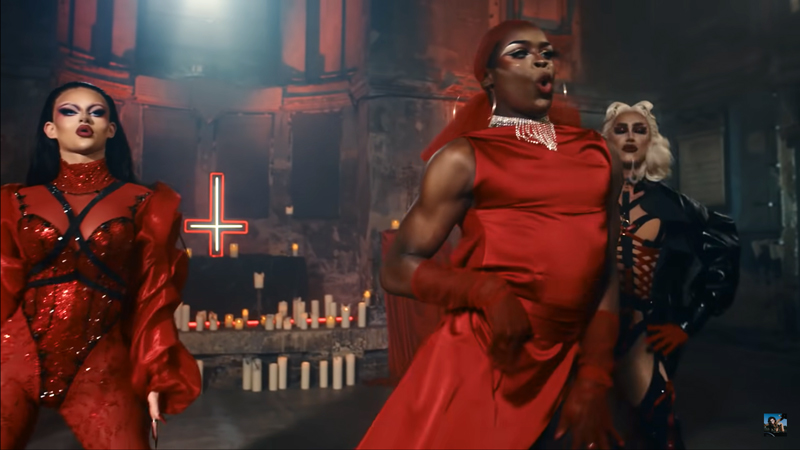 In the “Drag Performance Video”, a bunch of drag queens (who are wearing symbolic red) dance inside a desecrated church. Behind them is an inverted cross – the ultimate symbol representing satanism. I don’t think this can be clearer.

Good Ones is about Charli’s symbolic death and pending rebirth as a pawn of the music industry. The video Beg For You appears to continue in this ritualistic narrative.

The lyrics of Beg For You are about longing for someone who is kind of a jerk. Of course, the video is about a ritualistic initiation that includes drinking blood. Because, after letting the “good one go” (God), Charli “begs for” the jerk (Satan).

The song features Rina Sawayama, an up-and-coming artist who has been enjoying unfaltering praise from mass media.

One-eye signs = She is down with pushing the elite’s agenda.

Both Charli XCX and Rina Sawayama are ready to take their careers to another level. But first, they have to partake in weird, ritualistic crap. The Beg For You video is all about that. 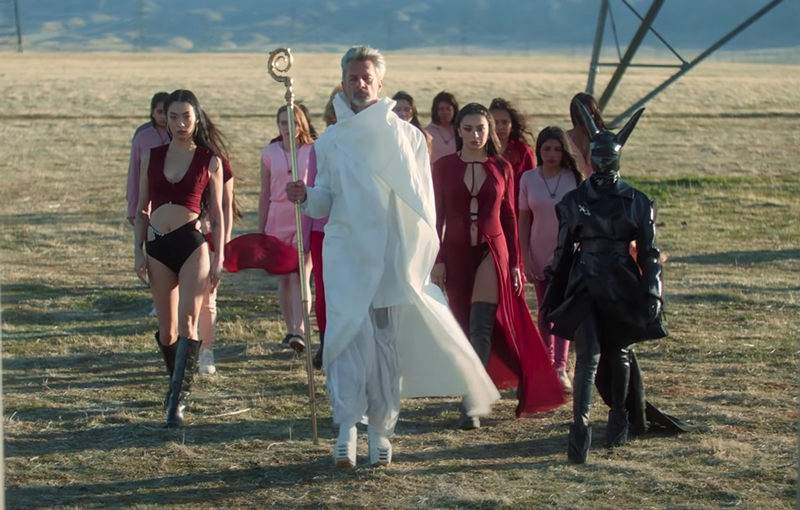 The video begins with Charli, Rina, and the coven of witches following some sort of spiritual leader.

The coven is led to a place where something unholy is about to happen.

A horned skull surrounded by a circle of sticks = Satanic ritual.

Once arrived, Charli and Rina take place in a ritualistic matter.

Charli is given a sharp object which she squeezes until she bleeds. That blood drips into a pool of water.

Then, the “spiritual guide” (or whatever) scoops up some of that blood water … and DRINKS IT.

I hope you’ve been noticing that the elite has been increasingly open about its obsession with drinking human blood.

After the ritual, the coven gets into a trance-like state and dances around the pool of bloody water.

The initiation ritual is complete and another crappy video is released to the world.

After years of hard work in the music industry with albums leaning towards innovation and experimentation, Charli XCX wanted to go mainstream. So she made mainstream music. More importantly, she complied with the industry’s requirements of selling her soul and pushing a sick agenda. The result is Crash – an album surrounded by over-the-top Illuminati madness.

Some might argue that Charli’s act is so blatant that it is actually satirical, a second-degree comment on the state of the industry. That might be a way of seeing things. However, the end result is the same: Through her works, Charli propagates in popular culture the same messages, the same symbolism, and the same satanic “energy” as others.

With that being said, did the soul-selling work out for Charli? At first glance, yes. She’s enjoying that sweet mass media attention. 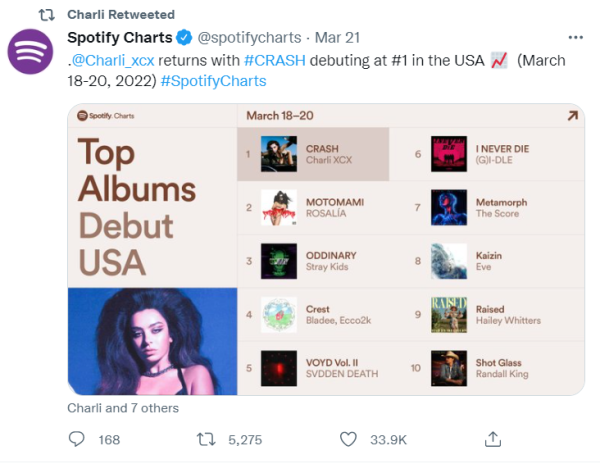 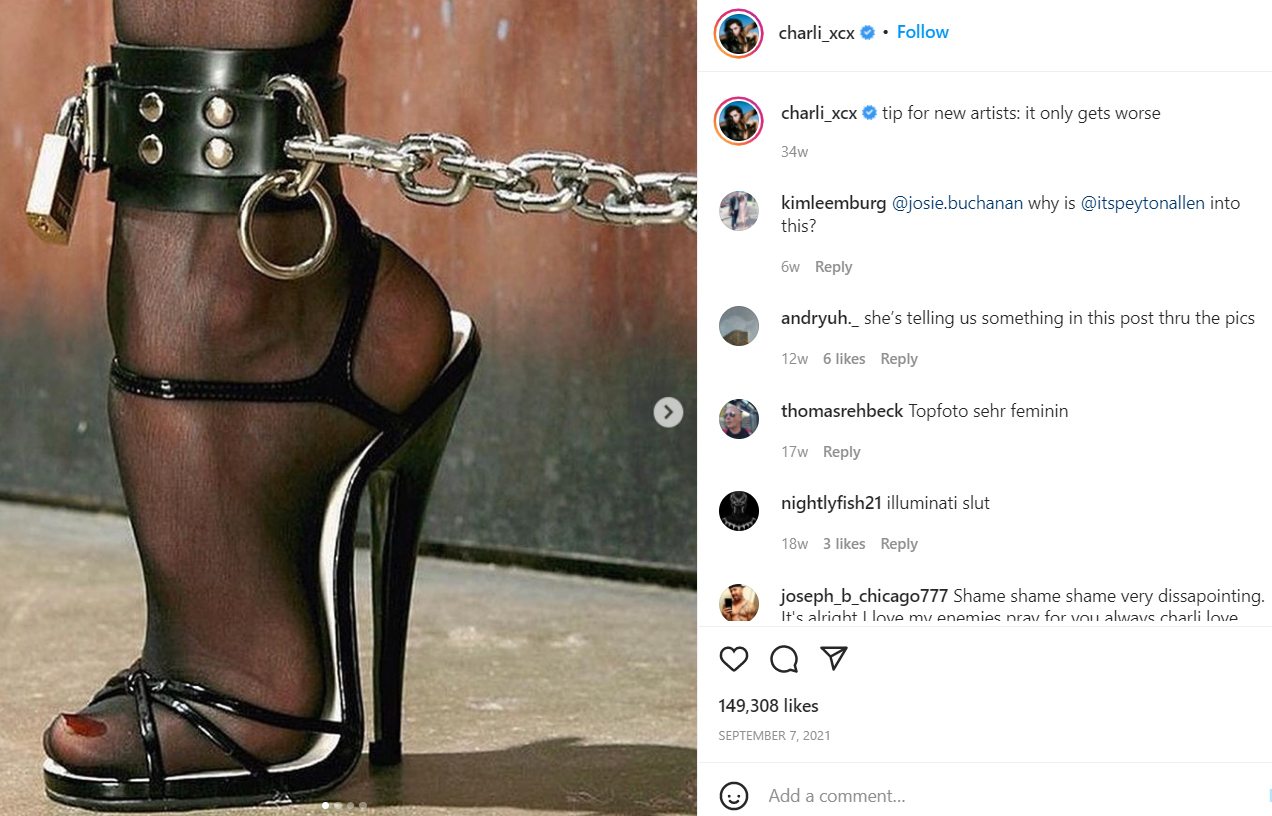 The caption of this post is “tip for new artist: it only gets worse”. The high heels and the chain refer to the sexual slavery of industry pawns.