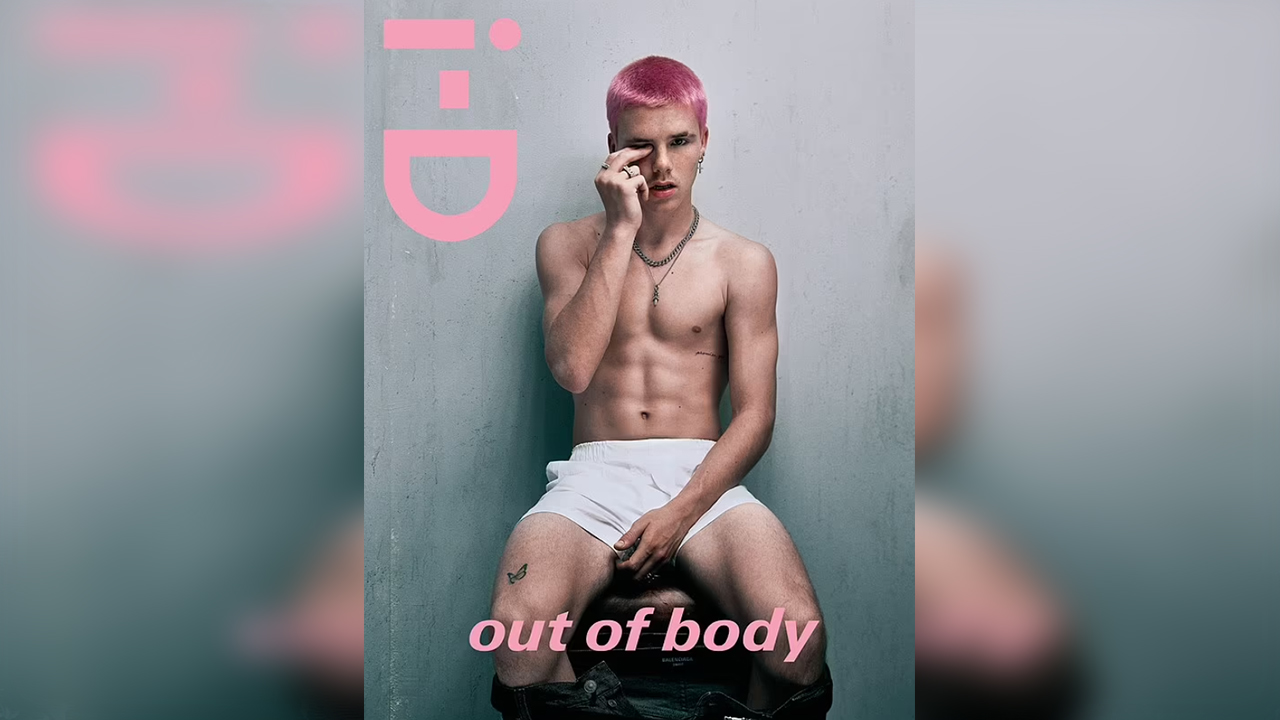 After a failed attempt at becoming a soccer player like his daddy, Cruz Beckham, who just turned 17, is launching a singing career. And, before anyone even heard him sing a single note, his parents already put their industry connections to work.

However, in this day and age, entering the industry is not only about talent, looks, or connections. It is about complete and utter submission to a sick agenda. For some, it is also about humiliation and bending to the will of high-placed child abusers who are looking to normalize their sickness through popular culture.

In one single picture, Cruz Beckham accomplished all of this. His mommy was so proud that she posted it on Instagram. 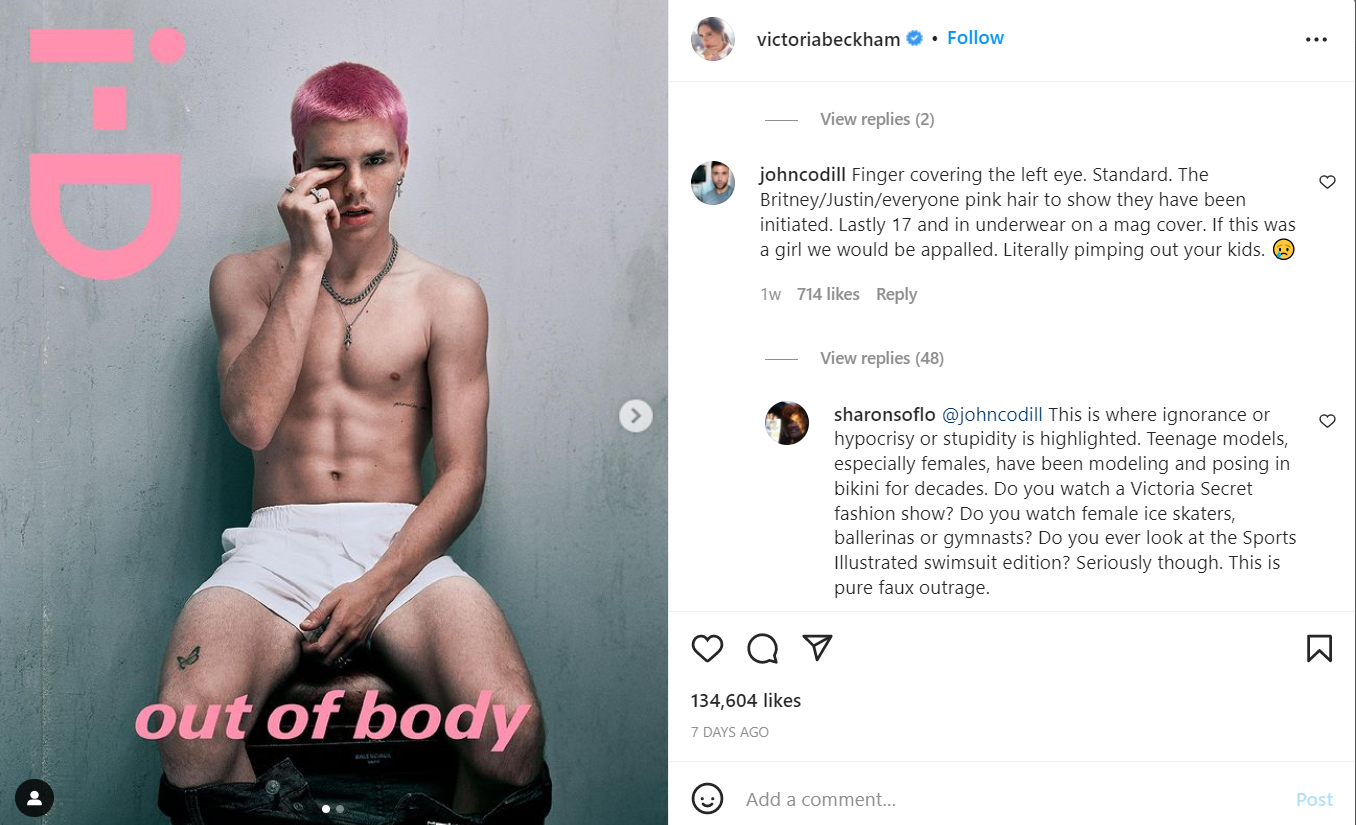 In this screenshot, we can one of the most liked comments. A growing number of vigilant citizens can now decode this elite madness.

This picture of a teenage boy (who was 16 at the time) with his pants down was not well received at all.

An example of the many articles about people not liking this picture.

When this picture came out, my inbox was flooded with people telling me that it was a prime candidate for the Symbolic Pics of the Month series. Of course, they’re right. This picture is basically SPOTM 101. However, there is so much going on in this pic (and the entire photoshoot) that I had to dedicate an entire article to it. Not because Cruz really matters, but because it is a perfect “template” that sums up the sacrifices required to enter the industry.

So here’s a complete breakdown of this picture. To fully understand the minding behind it, we must first look at the person behind it.

Steven Klein is one of the elite’s favorite fashion photographers. His works were featured on this site countless times because they consistently contain all of the symbolism and the obsessions of the occult elite. For instance, Klein directed Lady Gaga’s video Alejandro, which I analyzed over 12 years ago. 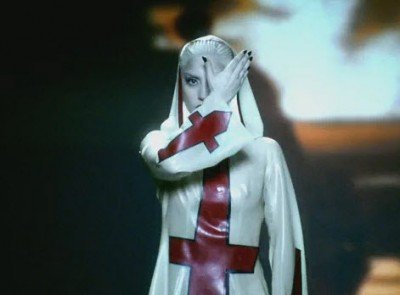 Lady Gaga does a one-eye sign while wearing a “Luciferian” robe adorned with an inverted cross in Alejandro.

Alejandro prominently featured some of the main themes in Klein’s works: Homoeroticism, satanism, and a whole lot of one-eye signs (which basically means fsubmission to the occult elite). 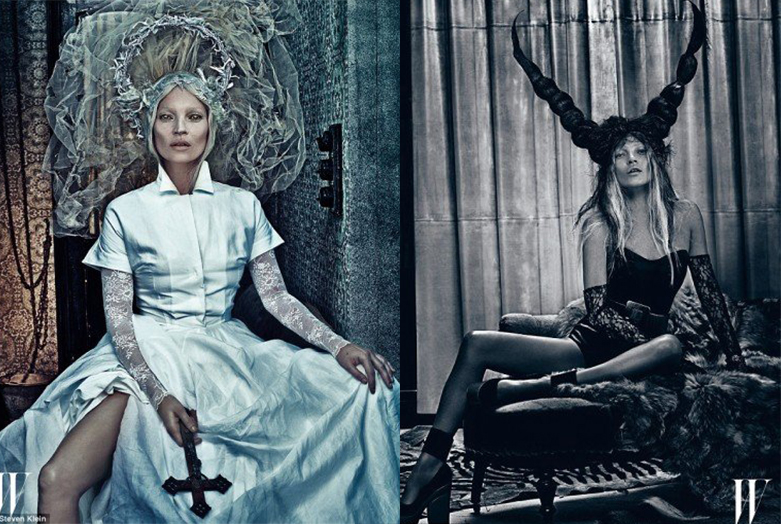 This photoshoot with Kate Moss focuses on the occult elite’s favorite themes: Duality and overt satanic imagery.

Like many other industry insiders, Klein’s Instagram account is filled with bizarre posts which appear to be hinting at some of the sick past times of the occult elite. 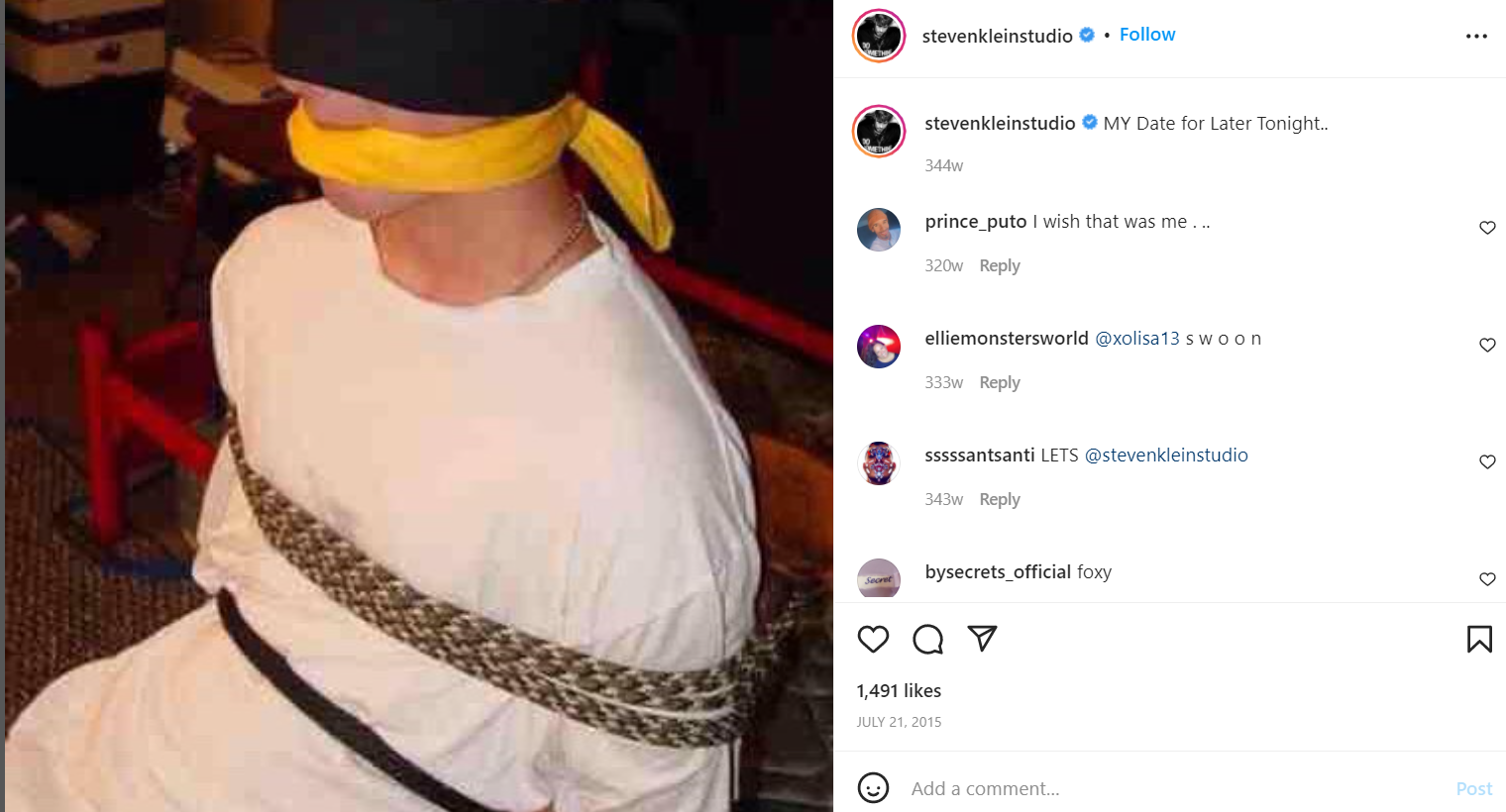 The caption says: “My Date for Later Tonight..”. This might be a joke. Also, this might not be a joke. 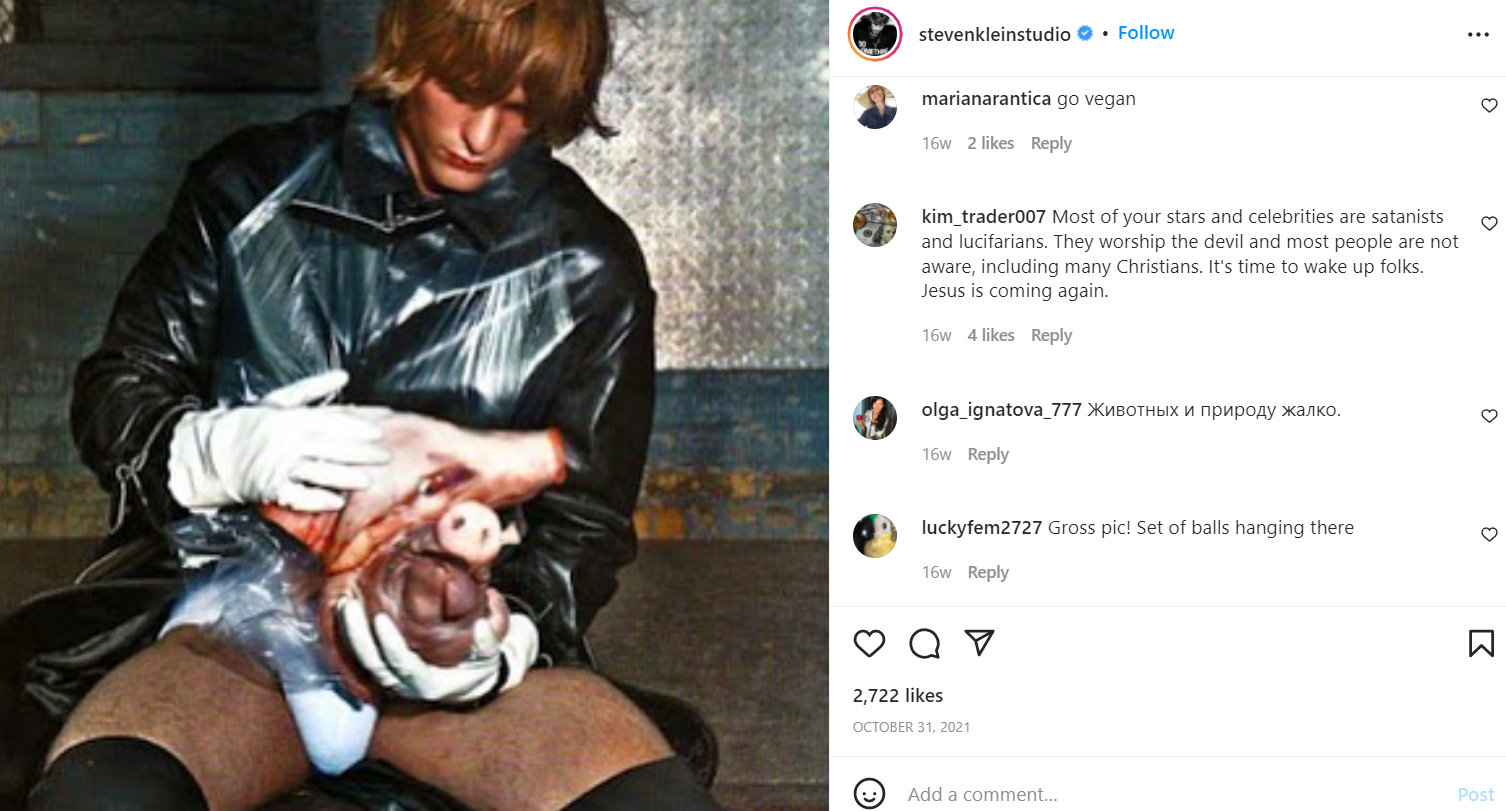 Klein also shares the elite’s obsession with pigs, especially pig heads (see my article about cannibal Armie Hammer). Is it because pigs are genetically close to humans? 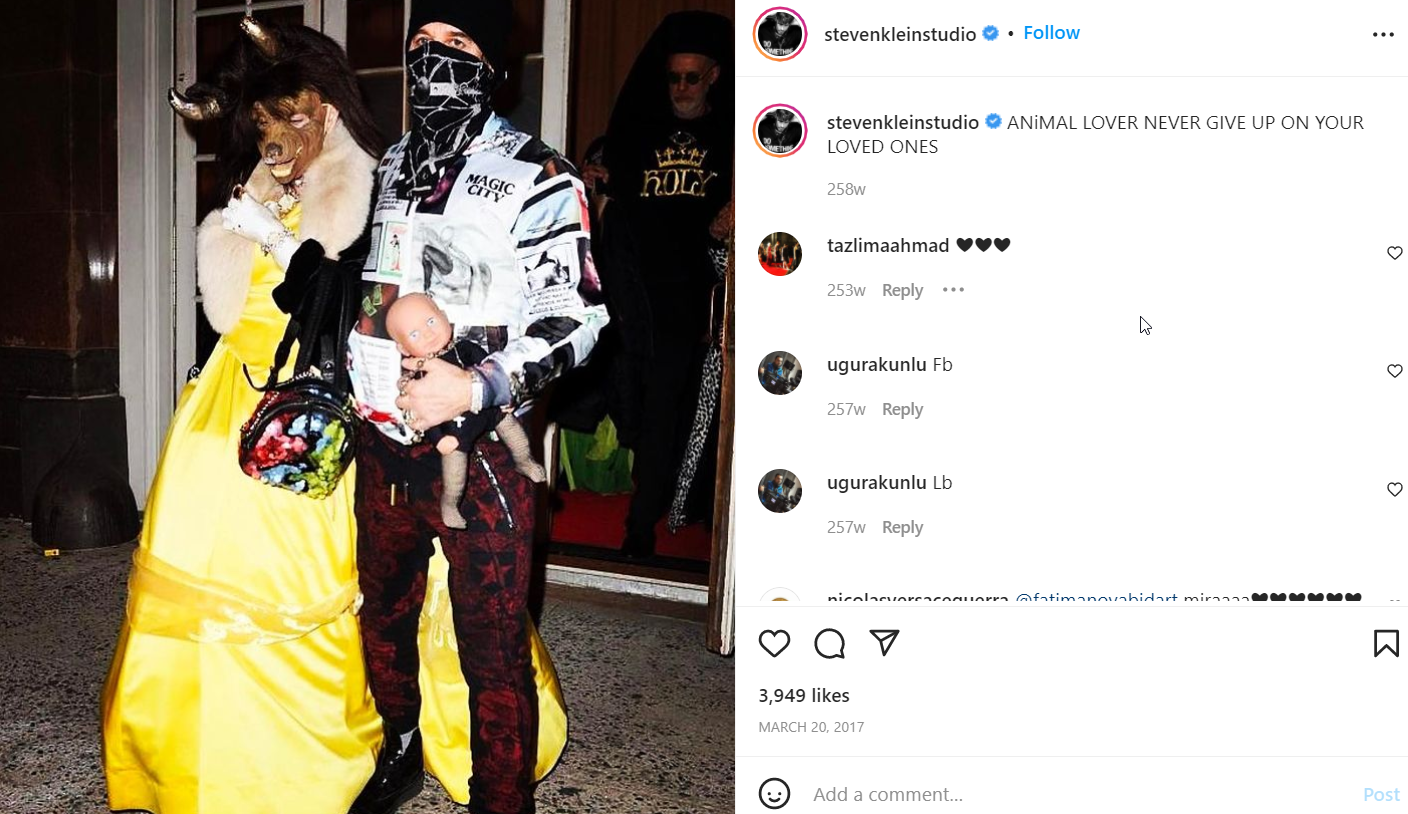 That’s Madonna wearing a pig mask with a guy holding a fake baby. What does this mean? They’re pedos and cannibals. 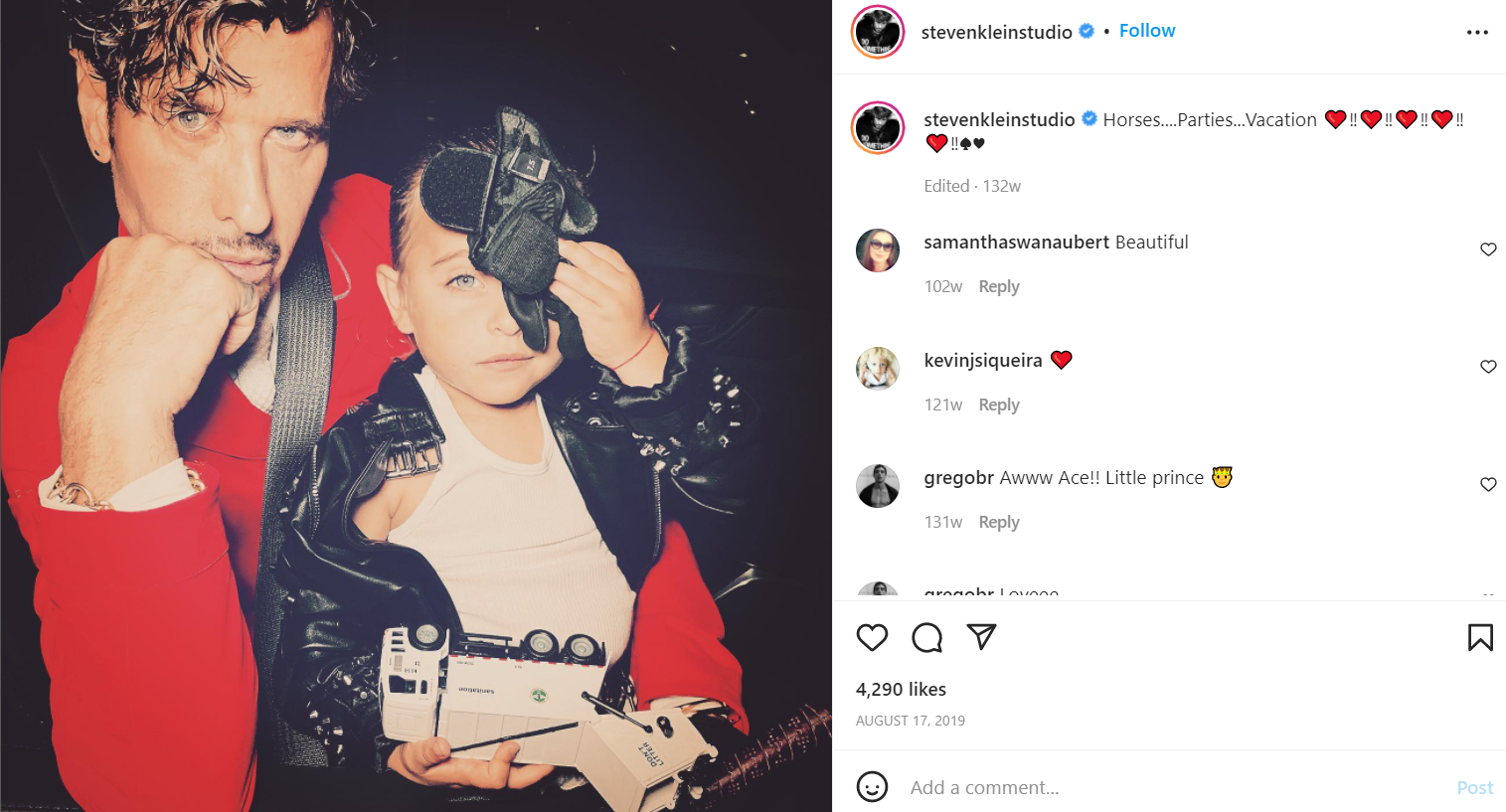 Among countless pics of pure degeneration on Klein’s Instagram account, there are also several pics of Klein’s son. The mix of these pics is bizarre and offputting. In this pic, the combination of the one-eye sign with the sad look on the child’s face is rather disturbing.

Throughout the years, Klein worked with the biggest stars in the world and his photoshoots never fail to contain symbolism that is too obvious to ignore. His (in)famous photoshoot with Justin Bieber has lots in common with the Cruz Beckham photos. 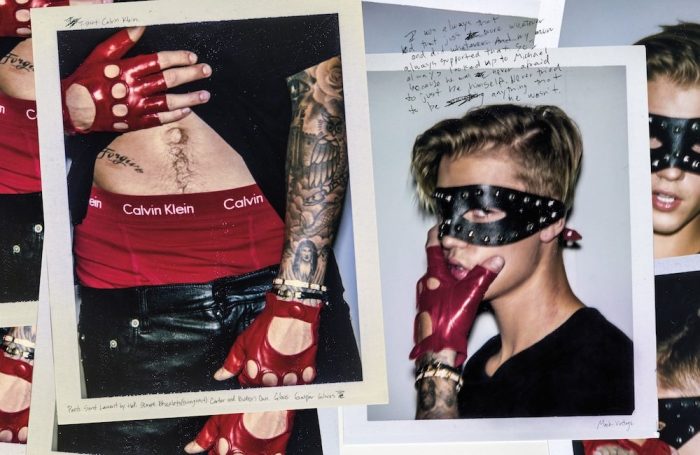 In this photoshoot for Interview magazine, Bieber is depicted as a masked “boy toy” ripe for abuse in elite circles. 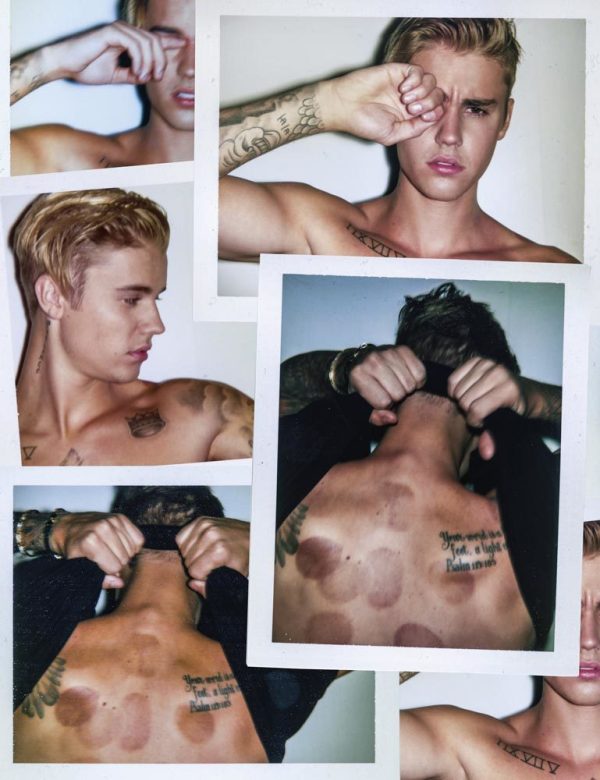 In other pics of the same photoshoot, Bieber looks like he just cried. Of course, the one-eye sign is very present, hinting to the fact that he’s a victim of the systematic abuse of the industry.

When one understands the mindset behind Klein’s works (and the occult elite in general), the meaning behind Cruz Beckham’s photoshoot becomes clearer … and more disturbing.

The Beckhams clearly want to see Cruz follow in the footsteps of Justin Bieber (who is apparently his “idol”). To do so, they’ve hired Poo Bear – one of Bieber’s songwriters.

A marketing machine is now in motion and that included a photoshoot by Steven Klein for i-D magazine. But there was more to this photoshoot than mere publicity. It was about his initiation into an industry bent on child abuse, exploitation, and submission. 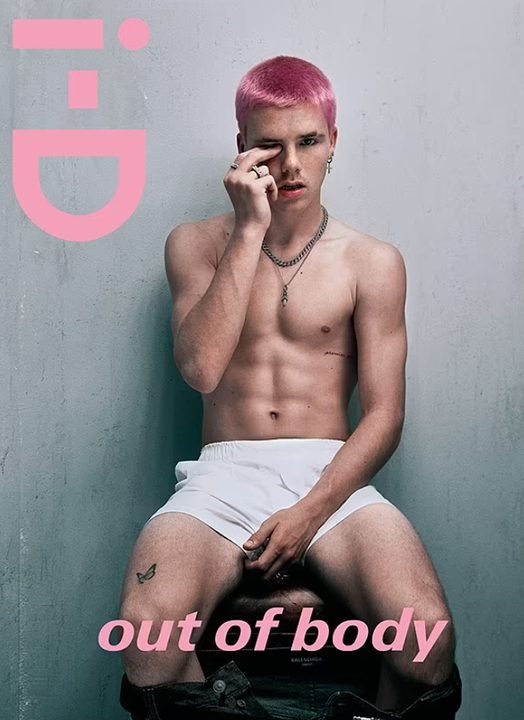 The awfulness of the entertainment industry summed up in one picture.

As said above, this picture is SPOTM 101.

First, at the time of taking this picture, Cruz was 16 years old. And Steven Klein, who is known for homoerotic pictures and videos, found it appropriate to have Cruz posing with his pants literally pulled down. This is a not-so-subtle allusion to the sexual exploitation of minors in the industry.

Then, there’s the butterfly tattoo. Many noted that it was illegal for minors to get tattoos in the UK. That is true, but there is more to it. In the entertainment industry, butterflies (especially Monarch butterflies) are references to Monarch programming – an offshoot of MKULTRA. As explained in my article about it, Monarch mind control turns people into mental slaves using a process of intense trauma (which includes sexual abuse) and dissociation (which enables programming). With that context in mind, the words “out of body” at the bottom of the picture become a creepy reference to dissociation. Indeed, under intense trauma, the minds of MK slaves dissociate from the body that is suffering as a defense mechanism.

Then, there’s the pink hair. The choice of color is not random. It is perfectly in line with the elite’s agenda of feminizing men – especially those in the music industry. In fact, I wouldn’t be surprised at all if Cruz wears a dress in the near future. Furthermore, celebrities who recently underwent MK programming often emerge with shaved heads and colored hair.

Of course, this entire mess of a picture is crowned with a massive one-eye sign which clearly indicates that this is all about the occult elite’s agenda – and nothing else. 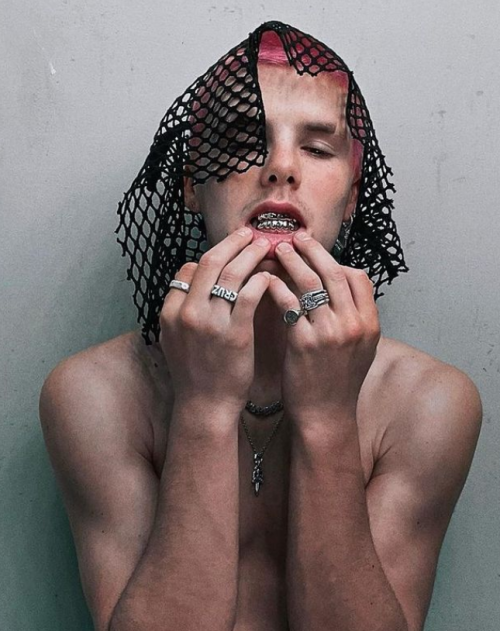 This other pic from the photoshoot also features a one-eye sign while also conveying the feeling that something is not right with that photoshoot. 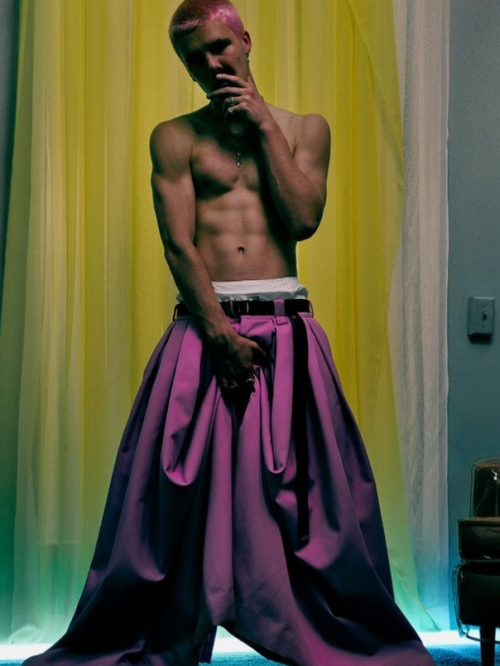 In this pic, Cruz is holding his junk while showing off his abs. In short, this photoshoot blatantly sexualizes a minor.

I don’t normally dedicate an entire article to a single picture but this one deserved an in-depth explanation. Cruz Beckham is an heir of celebrity royalty, the son of King David and Queen Victoria. These two monarchs have ascended to the top of the celebrity ladder decades ago, and they’ve remained at the top with constant media exposure.

Now, Cruz is the next generation of the Beckham lineage. And, like many other children of celebrities, he’s being pushed into the spotlight. However, that spotlight comes at a cost. There needs to be an initiation and there needs to be a sacrifice. Indeed, that fabled spotlight is controlled by all kinds of creeps and abusers. Those who are looking to bask in that spotlight must first bend to the will of the elite.

I guess Cruz will give a new meaning to the words “Bend it like Beckham”.

Related Topics:beckhamfeaturedmusic business
Up Next