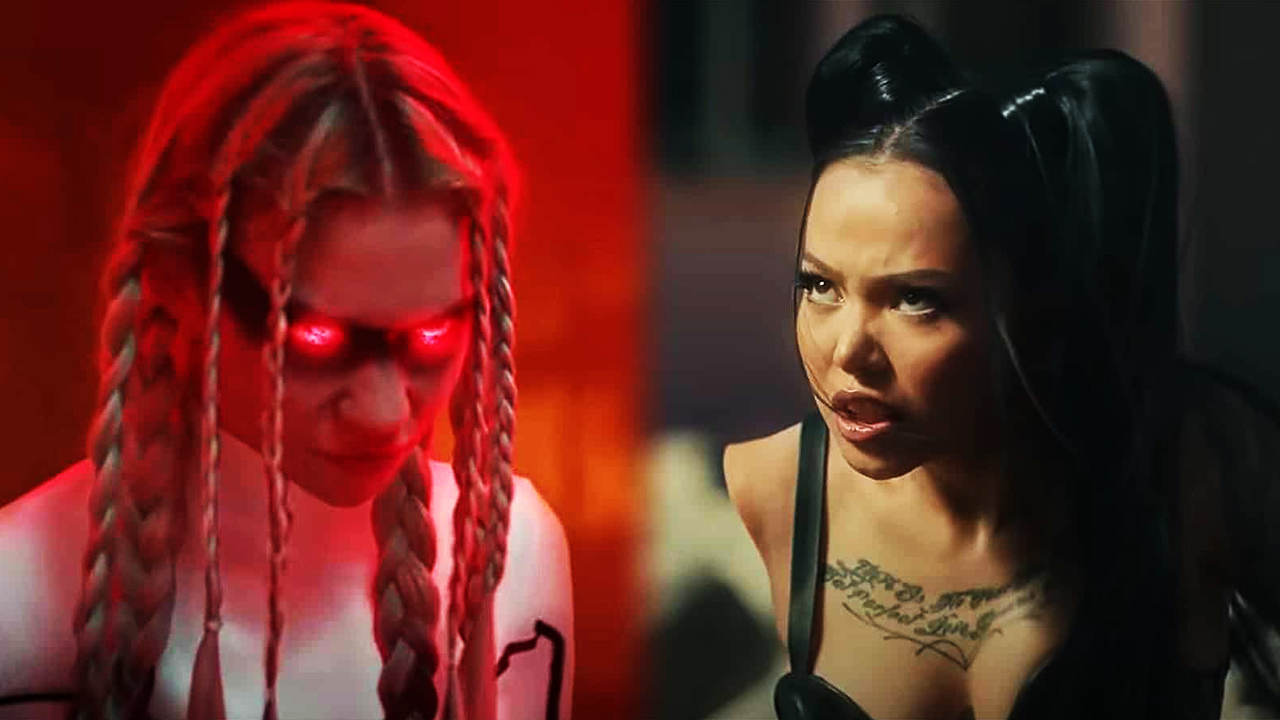 When one thinks about musical greatness, one inevitably thinks about Grimes and Bella Poarch. They’re definitely up there with the greats. DJ Khaled likes to scream “WE THE BEST MUSIC” in his songs, but he’s wrong. THEY the best music. Every song they ever made is nothing less than a timeless masterpiece that will be enjoyed for generations to come.

Alright, I reached my sarcasm quota for the day. The truth is: They’re both industry slaves. And everything about them points directly in that direction.

Bella Poarch is a massive star amongst children and teenagers. Her celebrity status is due to Tik Tok, the Chinese social media app that is profoundly affecting the behavior of an entire generation of kids while gathering a staggering amount of data about them. Apparently, Tik Tok’s algorithm really loves Bella Poarch as she’s one of the most watched personalities on the planet.

Grimes is also a big celebrity – mostly because she had a child with billionaire Elon Musk. Since then, she used her privileged position within the world elite to embed herself all over mass media and social media.

Although Grimes and Bella Poarch became stars through different paths, the end result is the same: They’ve turned into industry slaves who are used to promote the elite’s sick agenda. 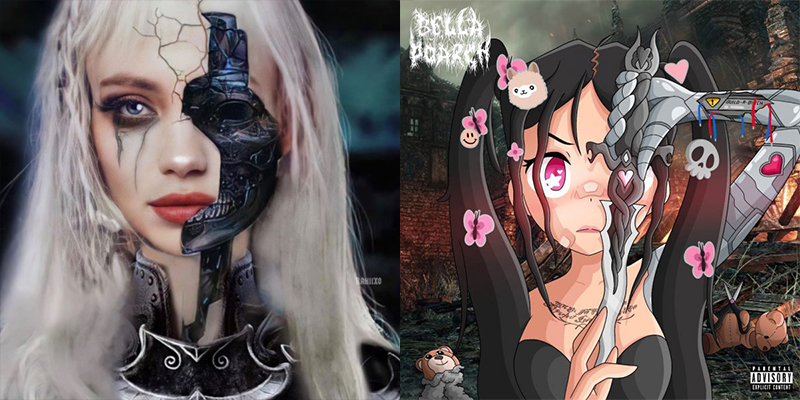 In the past years, both Grimes and Bella Poarch were depicted as androids surrounded by all kinds of symbols relating to Monarch programming. Furthermore, the one-eye sign is just their way of telling you “I am owned by the elite”.

What happens when you put these two self-proclaimed robots together in a video? An MKULTRA/transhumanist festival that is appropriately called Dolls. 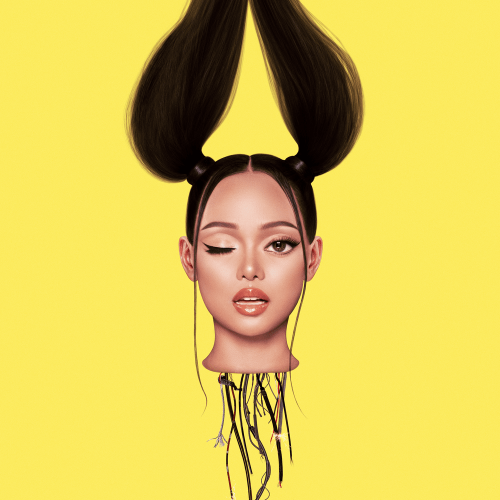 The cover art of the single depicts an android Bella Poarch whose head was cut off … and possibly held from above by the hair. Also, the wink makes an oh-so-clever one-eye sign.

Robots are programmed to accomplish specific tasks. And this is what these two robots do. Their mission: To expose young people to the elite’s mind-rotting agenda.

To put things in context, Dolls continues where Bella Poarch’s video Build a B*tch video left off (read my article about it here). Yup, her first video was literally titled Build a B*tch and it featured Bella being put together in some sort of sex doll factory. Then the dolls went haywire and wreaked havoc on us all. It was awful. Of course, the entire thing was littered with intense MK symbolism. The entire concept of Bella being built in a factory is a direct reference to Monarch mind control where victims are programmed to become sex slaves (Beta programming) or assassins (Delta programming). We see examples of both in the video.

With that being said, the video was a massive hit with young people as it currently sits at over 400 million views on YouTube. Dolls is the sequel and everything was done to attract young eyes to its agenda. Here’s a look at the video.

Dulls (not a typo)

Dolls begins with Bella holding her dying friend and screaming.

Bella is being tracked and monitored on multiple screens.

She is being monitored by a shady figure who wears a ritualistic robe. He represents the occult elite.

Then, the hooded figure presses a button and we see the title screen.

The word Dolls gets cut apart. Considering the fact that the cutting happens right when the hooded figure (aka the MK handler) presses a button, the image can represent the fracturing of an MK slave’s persona. It also represents Bella being literally torn apart.

Bella loses an arm due to the explosion caused by the hooded figure.

Then, for no specific reason, some creepy, rabbit-like thing rushes Bella.

In MK programming, the symbol of the rabbit is all-important. Like the white rabbit who leads Alice through the looking glass to Wonderland, the MK handler leads the MK slave to dissociation. In other words, this rabbit is there because this video is all about mind control.

So Bella manages to push that thing off her and she starts liberating her fellow dolls (MK slaves).

This is how the elite perceives celebrities used to push agendas.

Then, the robots walk awkwardly around the city looking for revenge.

The blond girl with the stockings is Chloe Cherry. She’s a pornographic actress who appeared in over 200 films. More recently, she starred in Euphoria, a teen drama that insidiously grooms its young viewers by exposing them to hardcore sexuality involving minors. Now, Chloe Cherry appears in a video that is aimed at the Tik Tok generation.

With all of that being said, Poarch is still missing an arm.

Luckily, she sees a bionic arm for sale. What are the odds?

So Bella puts on the arm and she becomes super powerful. She punches stuff and even shoots electric blasts. This is how the elite sells transhumanism (one of its most important agendas) to the youth. By making it cool and selling it as an “upgrade” to the human body.

Transhumanism is a philosophy that promotes the merging of humans with robots and it has been gaining steam over the past years. All across mass media, from blockbuster films to music videos, the addition of robotic parts to the human body is being normalized and even glamorized. 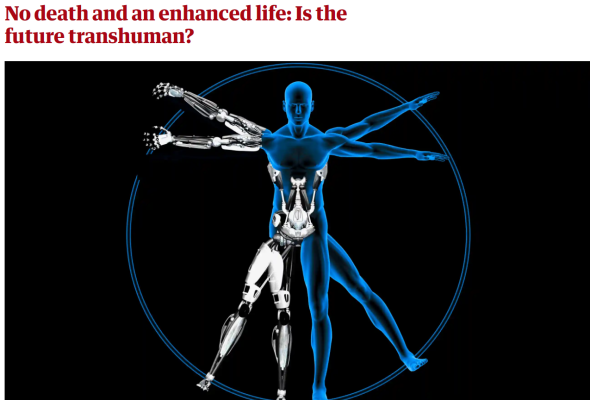 One of the many news articles promoting transhumanism. This is from The Guardian, a propaganda outlet of the global elite.

Equipped with her transhumanist arm, Bella leads her army of robots to the headquarters of the company that made them.

There, they are met with men dressed in white. They’re very hostile.

So, on one side, we’ve got the girls. On the other, we’ve got the men. Evil, generic, faceless, white men. They’re the enemy. Through this scene, another important agenda is communicated to children: Division and hatred between men and women. Throughout the years, I’ve analyzed countless music videos portraying the torture and murder of men as a good, empowering thing. That’s because masculinity is not a trait that is desired in the elite’s New World Order.

Meanwhile, the hooded figure watches the chaos unfold below.

The hooded figure (who represents the elite) looks down on his empire. He owns everything. He is also the MK handler of Bella Poarch. In other words, the elite is revealing itself to children in this music video.

At the bottom right of the screenshot above, we can see a billboard promoting an amusement park titled “No Man’s Land”. It’s a small detail but it represents the radical ideology that rules the industry. It hates men, it hates masculinity and it wants to suppress it.

Who is behind it all? A man. Part of the elite. Because he knows that if men decided to unite and kick his ass, he’d be done. That’s how rulers were brought down throughout history and that’s his biggest fear.

So Bella goes up to the office of the hooded man using her incredible bionic arm.

Mannequins are the elite’s favorite symbol to represent MK slaves. Bella is basically one of them.

However, just as Bella was about to get the guy, he presses a button.

Then Grimes comes out of a box and stops Bella.

Grimes is basically an MK slave programmed to protect her handler. And she does so by fighting Bella for a while. However, during the fight, the robots end up in the secret monitoring room.

When Grimes sees what is happening outside (women being hurt by men), she stops fighting Bella.

The two slaves stand there as Bella appears to say: “Look at what is happening. We shouldn’t be fighting each other, we should be uniting against the patriarchy and fighting men. Also, check out my butt”.

Not too long ago, parents used to complain about young musicians being too rebellious. Nowadays, we are seeing the exact opposite. Pop stars are constantly depicted as literal robots with no minds of their own and no free will. They’re fully controlled by powerful individuals and they’re completely powerless against them. Now consider the fact that young people live their formative years looking up to these “artists”. What kind of generation is being molded by this culture averse to freedom and independence?

Some might say that Bella is actually fighting against the system in the video. She’s really not. While “fighting” against the man, she actually promotes its agendas such as transhumanism, mind control, and war between sexes. She was programmed to do so. And now she is used to program our children.

Charli XCX and Her Story About Selling Her Soul for Fame