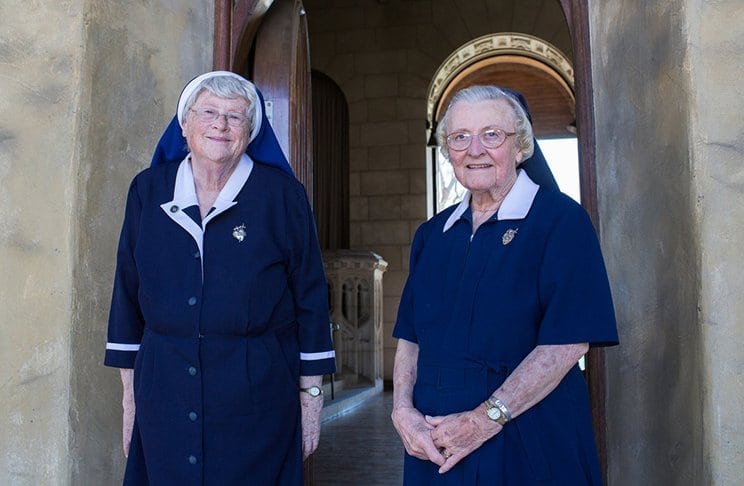 Sister Catherine Rose Holzman reportedly “suddenly collapsed and died” during a court appearance related to a case against Katy Perry.

As reported last year in the VC article Katy Perry Accused of Witchcraft by Nuns As She Wins Court Battle to Buy Their Former Convent, a bitter court case has been opposing Katy Perry with a group of nuns regarding the ownership of a convent. On March 10th, one of the nuns, Sister Catherine Rose Holzman, 89, died during a post-judgment hearing at the courthouse.

Only hours before her death, Sister Holzman was still fighting for the case. She told KTTV:

“We asked [Ms Hollister] to save us, to buy the property. She had nothing to do with forcing herself on us. And to Katy Perry, please stop. It’s not doing anyone any good except hurting a lot of people.”

The court case began in 2015 when Katy Perry sought to buy a massive convent from the Archdiocese of Los Angeles. A group of nuns fiercely opposed the deal, deeming Katy Perry an unsuitable owner of these “sacred grounds”.

“Perry initially thought that she would be able to buy the former convent from the archdiocese of Los Angeles, run by Archbishop Jose Gomez, and made a $14.5 million (£9.3 million) bid. However, the five nuns living in the property at the time deemed that Perry would be an unsuitable owner and pushed to sell it to businesswoman Dana Hollister instead, who wanted to turn it into a hotel. A local Catholic archbishop then argued that it was him and not the nuns who owned the property and that it was his wish to sell the property to Perry.

The Hollywood Reporter now reports that judge Stephanie Bowick issued a ruling on Tuesday (March 14) that the nuns “did not have authority to sell the property to Hollister” and “nevertheless failed to validly consummate the transaction.”
– NME, Judge sides with Katy Perry as nuns accuse singer of witchcraft

Throughout the case, the nuns stated that they “did not like Katy Perry’s lifestyle’. They’ve also branded her as ‘disgusting’ and hinted that she would desecrate the convent’s sacred grounds.

In an interview with the Daily Mail, the nuns described the time they confronted Perry about her “selling her soul to the devil” and dealing with witchcraft.

“Recalling a meeting the sisters had with the singer, Sister Callanan said: ‘She brought her mother Mary to the meeting and I just thought, ‘Oh God help us.’

‘Katy Perry was all dressed very nicely and said: ‘I have this tattoo on my wrist and it says Jesus.

‘And I wanted to say, ‘yes and what is the tattoo on your behind?’

The nun also quizzed Perry on remarks she had made about ‘selling her soul to the devil’ when she moved from Christian music into mainstream pop.

The nun was probably referring to this interview where Perry stated this she “sold her soul to the devil”.

‘Well I don’t know, that’s why I want that property because I want to go down and sit down and drink green tea, and just go to the meditation garden and just meditate.’

She revealed she also asked Perry about her visit to Salem, which is synonymous with witchcraft: ‘I asked her: ‘you are into witchcraft, you went to Salem.’

‘She looked over at one of her people and said: ‘Did I go to Salem, was I in Salem?

‘I said: ‘Come on, you didn’t know you were in Salem at a witchcraft thing. You don’t remember it? That would stick way out in my mind. I read it, was that incorrect information?’

‘It disturbs me, and that was our mother house and our retreat house and it’s sacred ground.
– Ibid. 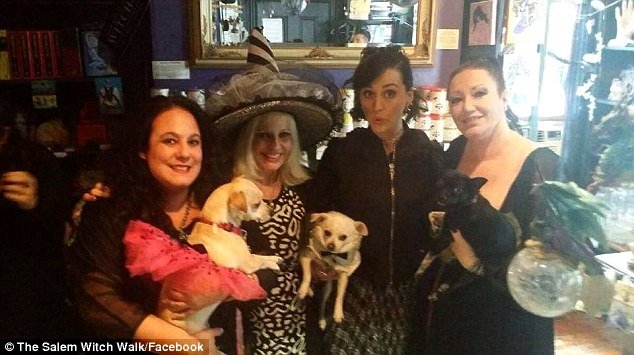 At the 2014 Grammy Awards, Katy Perry played the role of a witch being burnt at the stake while horned figure stood in the background.

The property in the midst of the court battle has a rather dark history. 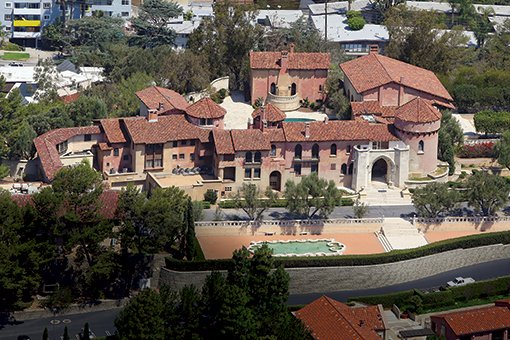 The eight-acre estate in Loz Feliz, Los Angeles was bought in 1961 by Catholic philanthropist Sir Daniel Donohue. Soon after, his son committed suicide on the property.

In 1969, the house adjoining the property was the theater of a horrific murder at the hands of Charles Manson and his followers. The couple Leno and Rosemary LaBianca were stabbed dozens of times in a crime scene that had all of the makings of ritual sacrifice.

Leno LaBianca was given 14 puncture wounds with a carving fork, which was left jutting out of his stomach. A steak knife was also planted in his throat. Manson’s followers wrote “Rise” and “Death to pigs” on the walls and “Helter Skelter” on the refrigerator door, all in LaBianca’s blood. These events occurred on the day following the infamous killing of Sharon Tate (Roman Polanski’s pregnant wife) by Manson’s “family”.

Sister Catherine Rose Holzman death while in court against Katy Perry is yet another bizarre – and sadly symbolic – chapter in this property’s dark history.

FacebookTwitterSubscribe
Related Topics:katy perry
Up Next