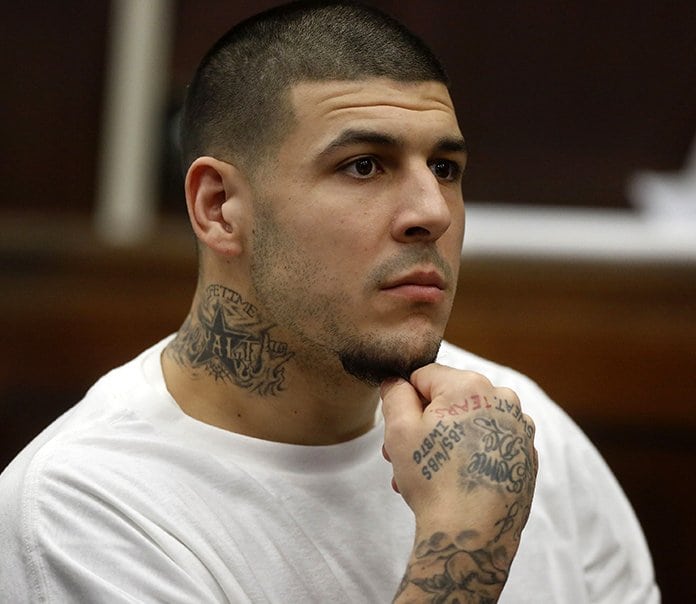 According to reports, Hernandez wrote the word “ILLUMINATI” with his own blood on the walls of his cell along with the symbol of an “unfinished pyramid and an eye”. Furthermore, “John 3:16” was also written on his forehead.

The story of Aaron Hernandez is quite a sad and disturbing one. A young rich NFL player ends up taking his own life in a lonely jail cell, in gruesome circumstances. The bizarre messages written in blood by Hernandez indicate that he was in deep mental and spiritual turmoil.

“Hernandez was found just after 3 a.m. Wednesday morning, hanging from bedsheets that were attached to his cell window. 5 Investigates previously reported that he had written “John 3:16” on his forehead in ink.

Hernandez also used his own blood to draw on the walls of his cell.

5 Investigates’ Kathy Curran has learned that one of the drawings was what’s known as the unfinished pyramid and the all-seeing eye of God. The image is similar to what is found on the back of U.S. currency.

5 Investigates learned that Hernandez drew an image on his cell wall depicting what’s known as the unfinished pyramid and all-seeing eye. The symbol is found in religion and on U.S. currency.

Below the pyramid, Hernandez wrote “ILLUMINATI” in capital letters.

The illuminati is a person or group claiming to have religious enlightenment or knowledge. The illuminati has also been the subject of several theories, including one that claims they control of the world.

Above the pyramid, Hernandez drew an oval with rays coming from the edges.

Nearby, rosary beads hung on the wall of his cell.

5 Investigates has also learned more about the letters left for Hernandez’s family.

In one, he wrote that he was entering the “timeless realm” and would see them in heaven.

5 Investigates previously reported that Hernandez also wrote that he loved his family and told them not to shed a tear.

Near the letters, a Bible was opened to the John 3:16 verse, which reads, “For God so loved the world that he gave his only begotten Son, that whosoever believeth in him should not perish, but have everlasting life.”

State officials continue to investigate his death, including whether a 2 a.m. check of Hernandez’s cell had been performed by the correction department officers on duty.

Sources told 5 Investigates the 31-year-old officer responsible for the rounds said he last saw Hernandez at 1 a.m. and when he went to check his cell at 3 a.m. there was a sheet over the window of the cell door.
– WCVB5, “5 Investigates: Hernandez drew ‘all-seeing eye,’ said he was entering ’timeless realm”

Therefore, in his last moments, Hernandez drew the symbol of the occult elite with his own blood. Was he trying to communicate something? 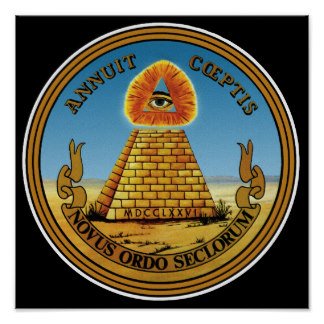 Hernandez drew an “unfinished pyramid” topped by an all-seeing eye on his cell along with the word “ILLUMINATI”. Why would someone do that right before killing oneself? He was obviously trying to communicate something.

Hernandez was serving a life sentence without the possibility of parole for the 2013 shooting of Odin Lloyd, a semiprofessional football player who was dating the sister of his fiancée.

Hernandez was also a suspect in the 2012 double-murder of Daniel de Abreu and Safiro Furtado in Boston. He was however acquitted of those charges only a few days before he took his own life.

Despite autopsy reports confirming that the cause of death was suicide, people close to him refuse to believe that Hernandez took his own life.

“The family and legal team is shocked and surprised at the news of Aaron’s death,” Hernandez’s lawyer Jose Baez said in a statement. “There were no conversations or correspondence from Aaron to his family or legal team that would have indicated anything like this was possible. Aaron was looking forward to an opportunity for a second chance to prove his innocence. Those who love and care about him are heartbroken and determined to find the truth surrounding his untimely death. We request that authorities conduct a transparent and thorough investigation.

“The Baez Law Firm will participate in its own examination into this tragic event and update the media and public on its findings when they become available.”

“Chico was not a saint, but my family and I loved him, and he would never take his own life,” Murphy said.

That sentiment was shared by Hernandez’s cousin, Randy Garcia.

“Most of us are in shock. We still don’t believe that this happened,” Garcia told WTNH via Skype. “We still think there’s no way Aaron would take his own life.”

Hernandez was moved to tears on Friday after he was acquitted of the 2012 fatal shootings of Daniel de Abreu and Safiro Furtado in Boston. Just before his acquittal, Hernandez was seen blowing kisses to the little girl he fathered with fiancée Shayanna Jenkins-Hernandez. Cameras captured the tender exchange.

Hernandez was still serving a life sentence without the possibility of parole for his conviction in the 2013 shooting of Odin Lloyd, a semiprofessional football player who was dating Jenkins-Hernandez’s sister.

Garcia said one of his nephews posted on Facebook that he had spoken with Hernandez on Tuesday night and that “he was in good spirits, that he was — his conversation was nothing but joy — that he was thinking about his future and how he was going to win his appeal in his Odin Lloyd case, and he was in really good spirits. So for this to happen — we’re shocked and we still don’t believe that he took his life, and we still believe there’s a lot of foul play going on.”
– ESPN, Aaron Hernandez found dead after hanging in prison cell

Department of Correction spokesman Christopher Fallon said in a statement that there were no signs of Hernandez being suicidal.

“Hernandez was in a single cell in a general population housing unit in the maximum-security state prison. He hanged himself using a bed sheet that he attached to a cell window, Fallon said.

Hernandez tried to block the cell door from the inside by jamming the door with various items, Fallon said. (…)

Fallon said he was not aware of any suicide note written by Hernandez and stressed that an investigation is ongoing. He said officials had no concern that Hernandez was planning on taking his own life. He also noted that if there was a concern about his well-being, Hernandez would have been transferred to a mental health unit.”
– Ibid.

Before and after his death, all kinds of rumors and suspicions circulated about him ranging from his implication in various criminal acts to his purported bisexuality to him suffering from brain damage (which morbidly caused his brain to be removed from his body after his death to be analyzed).

One thing is for sure, Hernandez had his demons – whether they be figurative or literal. His last moments appear to be tainted with an attempt at religious salvation while obsessing about the Illuminati. Was Hernandez simply a deeply disturbed individual … or did the occult elite get to him?

What is Happening to Katy Perry?

Facebook is Working on a Smartphone That Can Read Thoughts