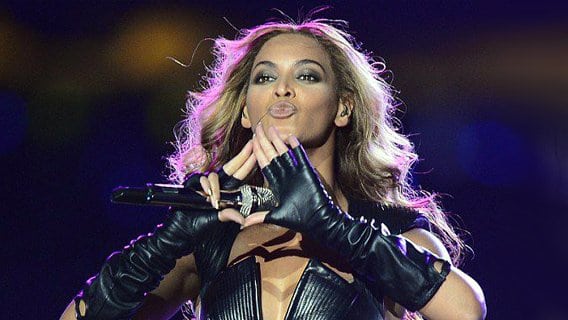 The 2013 Super Bowl featured the Sandy Hook chorus, Jennifer Hudson, Alicia Keys, Beyoncé, a whole bunch of advertisements and, oh yeah, a football game. While things were not as overt and in your face as last year’s half time show/celebration of Great Priestess Madonna, there was nevertheless a lot of Illuminati Agenda-pushing going on. Here’s a recap of the noteworthy elements that occurred in the 2013 Super Bowl, the TV event of the year. 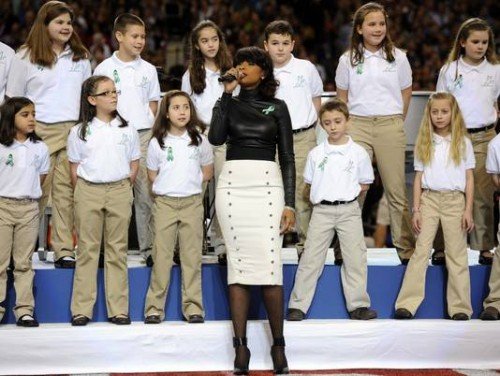 Jennifer Hudson sings with the Sandy Hook Chorus … a group that was NOT created by the young kids that are part of it.

As described in my recent article, Sandy Hook Survivors Are Made to Sing “Over the Rainbow” to Commemorate the Shooting, children that survived the shooting are currently being used in all kinds of media events. A few weeks ago, they recorded Over the Rainbow (an MK-Ultra trigger song) and were made to perform on live television. For the Super Bowl, the Sandy Hook Chorus was sent to New Orleans to sing before 70,000 spectators and millions of TV viewers. Why? Why do we keep bringing this horrible shooting to the center stage? To remind people that “gun control is good”? Isn’t it very sad and ironic that these kids must sing America the Beautiful after witnessing a horrible massacre, one that might have been caused by a mind-controlled patsy? Why are these kids being booked and flown to all kinds of nerve-wracking mass media events? Is this still part of their “healing process”? Why are they being mixed with the Illuminati entertainment industry? Shouldn’t they be home with their friends and families instead of being under the spotlight? The exploitation of their image is rather unsettling.

The performance was led by an industry-favorite, Jennifer Hudson –  aka the “new Whitney Houston” – who is always chosen to perform in important occasions. Hudson also survived a strange and terrible tragedy, with the triple-murder of her mother, brother, and nephew in 2008.

The Half Time Show

The best word I can use to describe the half-time show is “Beyoncé-ish”. It was like, sooooo Beyoncé. After “singing” (kinda) at the Obama inauguration, Beyoncé was again the star of a major event. No need to say that she’s an industry favorite, a figure-head of the Illuminati music industry. As described in several articles on this site, the symbolism in her work clearly indicates who she is working for. While her half time show was not the big, pharaonic occult display of Madonna’s 2012 show, we still witnessed the mind-control symbolism that is usually part of Beyoncé’s material.

The entire show focused on duality and the multiplying of personalities, two concepts that are extremely important in Monarch mind control (read the article Origins and Techniques of Monarch Mind Control if you don’t know what I’m talking about).

The first and most visible cue to the concept of duality and alter-personas is the stage itself which consists of two faces that somewhat look like Beyoncé.

The stage is made up of two faces mirroring each other, an image evoking duality and multiple personalities.

The first part of the show contained a combination of symbols and visual effects that refer to the concepts of duality and multiple personalities.

At the beginning of “Baby Boy”, Beyoncé dances in front of a black and white background (a representation of duality). Through video effects, she then “multiplies herself”.

Here we see one black silhouette (which is Beyoncé, the “core” personality) and two white silhouettes (alters personas?).

The two white silhouettes turn into real human Beyoncé look-a-likes who dance with her for a while. We then see a lot of lights flashing and confusing effects, making us wonder who is the real Beyoncé. The blurring between reality and illusion is a focal point of mind control and is aptly displayed here. 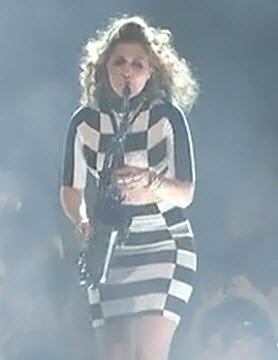 Even the saxophone girl, with her Masonic checkerboard pattern dress, conveys the concept of duality.

At one point, the screen behind Beyoncé displays the classic symbol representing the fracturing of personalities, one that is almost ALWAYS part of MK-themed narratives.

The screen that displayed alter personas and dualistic patterns shatter (emphasized with a loud sound effect), a symbol indicating the fracturing of persona in MK symbolism.

The first part of the show was therefore all about duality and multiple Beyoncés. Then, the group Destiny’s Child was randomly brought back from the late-90s to sing along with one of Beyoncé’s solo hits. During Single Ladies (Put a Ring on It), Beyoncé briefly flashes a hand sign – one that readers of this site probably already know all too well. This gesture generated a lot of media attention. 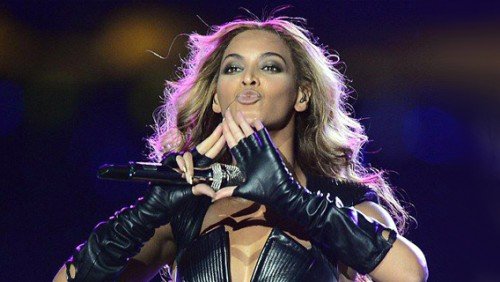 Quite a few mainstream websites such as Yahoo! and Huffington Post published articles about this hand sign, asking if Beyoncé was “flashing an Illuminati symbol”. These articles, however, all come to the same conclusion: Beyoncé was doing the ROC sign to shout-out her husband’s label (duuuh) and everyone who thinks otherwise is a moron. Many of the articles then provide a quick, half-assed recap of what the Illuminati is, making sure to distort many facts to make the whole thing seem completely idiotic. This trend is becoming increasingly apparent on the web and mass media.

I admit that the mainstream sources are right: This hand sign is indeed the “ROC sign”. But here’s my question to these “journalists”: Where does the ROC sign come from? What does it represent? Why does a label named Roc-A-Fella (a nod to the Rockefellers, one of the most powerful Illuminati elite families) uses a triangle hand sign to represent itself? How about going a little further than the obvious superficial answer for a change, mainstream media?

The ROC hand sign refers to the All-Seeing Eye within a triangle, the ultimate Illuminati symbol. 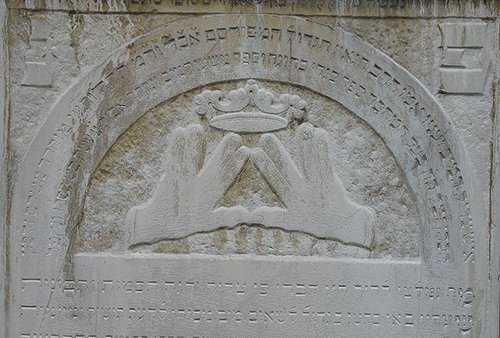 In Judaism, the gesture is known as Kohanim hands Priestly Blessing. It is depicted here on 18th Century grave.

The hand sign is not random. It signifies something and flashing it during the Super Bowl tells a lot about who is running the show.

Also, to respond to the ridiculous claims of those mainstream articles: No, Beyoncé and Willow Smith are not IN the Illuminati. They are USED by the Illuminati-owned music industry to push an elite agenda. Pop artists are pawns who signed a contract binding them to the elite and requiring them to do their bidding. Most readers of this site know this already, but there is a growing push in mainstream media to discredit “conspiracy theories” by writing stuff like “Look at these idiots who think that Beyonce is part of an 18th-century secret society”.

Anyhow, let’s look at the rest of the Super Bowl.

During the 3rd quarter of the football game, half of the lights go out. It was caused by a mysterious “anomaly” that caused the system to shut down. 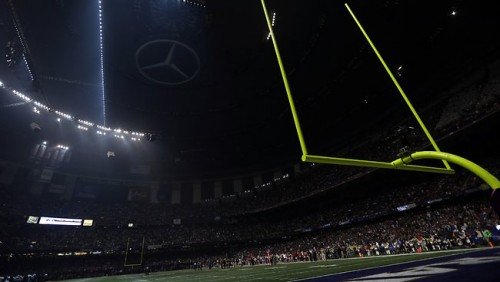 Considering the Illuminati sub-text of the event, I cannot help but think about the occult pseudo-meaning of having half of the stadium basking in the light and having the other half being in darkness. I am not saying this happened on purpose, but it is still an interesting synchronicity. One thing is for sure, the “glitch” energized the 49ers, who scored a few touchdowns and got back in the game. All of a sudden, this lost cause became interesting and the fourth quarter was rather … thrilling. Apparently, Mercedes-Benz knew that would happen. 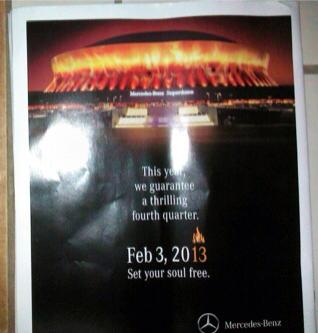 While the ad seemingly refers to the fourth quarter of the fiscal year, the literal meaning of the ad is still perplexing, considering what happened at the game.

If we combine this ad with the one I described in The 2013 Mercedes Super Bowl Commercial and its Occult Message, one can at least say that Mercedes-Benz brought a lot of strangeness to the SuperBowl.

While things were somewhat more subdued and abstract in this year’s SuperBowl (versus the 2012 edition), there were still many elements that went right along the Agendas described on this site. When we combine all of the elements together, we realize that there’s a common and reoccurring theme going on, one that points directly to the “hidden hand” of the Illuminati and its many Agendas.

The mass media coverage of Beyoncé’s Illuminati hand sign, also reflects a new trend: Mass media are now directly addressing, discrediting and ridiculing “conspiracy theories” (I hate that term) in order to make sure that people do not start thinking too much about the strange things they are witnessing on TV. Media coverage of Sandy Hook also followed that trend as several TV personalities went on air to “debunk” the theories. Fortunately for the powers that be, most people still teared up when they saw the Sandy Hook chorus standing in the middle of the SuperDome, singing about how America is beautiful. Yes, America is beautiful, but the elite that run it, and who exploit people’s lives and emotions to push their own Agenda, is most definitely not.

Oh yeah, and the Ravens won the game.

Emeli Sandé’s “Clown”: A Song About Selling Out to the Music Industry?