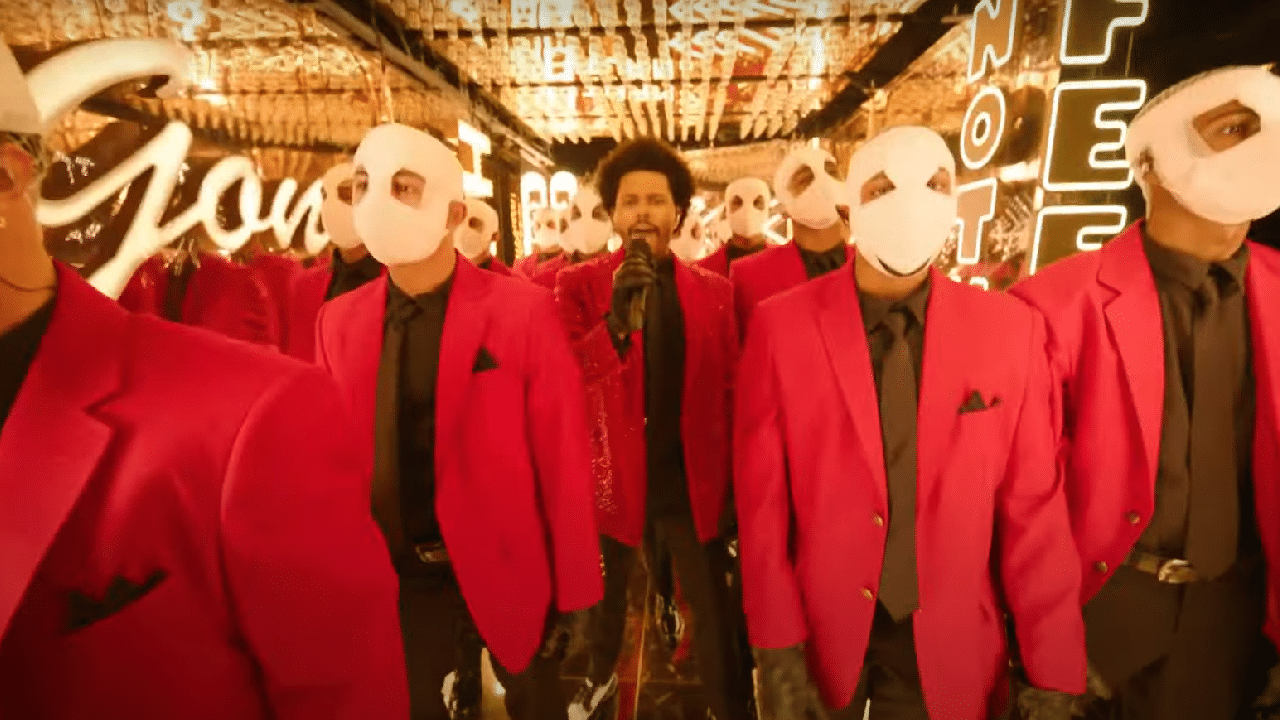 The Super Bowl is, at its core, a sporting event. However, judging by media reactions, lots of people were less interested in the actual football game and more interested in playing COVID police. The result: Twitter geniuses complained about the lack of social distancing in the crowd while not realizing that most “fans” were actually cardboard cutouts. Other individuals obsessed about the mask-wearing practices of people in the stadium and took the time to shame them on social media. “Did he just remove his mask to take a sip of beer? Unacceptable. Drink through your mask like the rest of us, buddy!”

With all of these joyless people actively looking for ways to be offended by a football game, The Weeknd was in charge of lightening the mood with some good old fashioned singing and dancing. And for about 14 minutes, instead of moaning about some player on the sidelines wearing his mask under his nose, people gazed at the red-clad The Weeknd and wondered things such as “What is the meaning of the bandages?”

In that sense, The Weeknd accomplished his job as an entertainer: To get people to forget about their immediate problems by drawing them into his artistic universe. However, when one understands the meaning of this universe, one is reminded of another major problem: The entertainment industry is a toxic cesspool of satanic psychopaths. Am I exaggerating, here? No.

In fact, the entire narrative surrounding The Weeknd points to this very fact.

To properly understand the meaning of The Weeknd’s enigmatic performance, one needs to look at his alter persona and its evolution throughout the past months. Because, while the world was fighting a pandemic, The Weeknd has been carrying out a form of ritual drama in his public appearances. Indeed, through costumes and makeup, the Canadian singer has been telling a story of transformation as a “chosen one” of the entertainment business.

The Weeknd accepting an award at the 2020 VMAs (which was a dystopian abomination) with a bruised face. 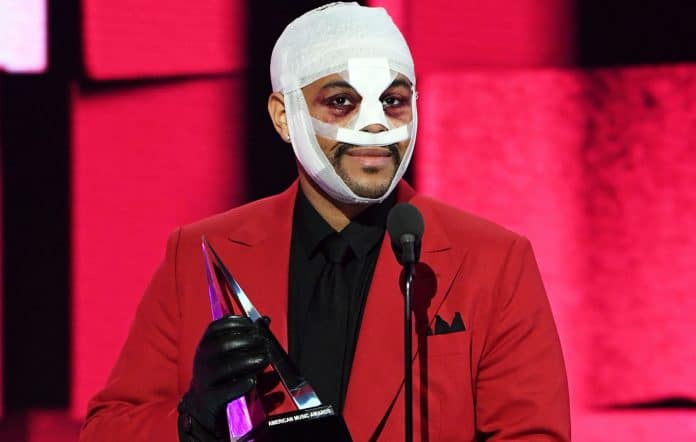 The Weeknd accepting an award at the 2020 AMAs with bandages on his face.

While The Weeknd receives accolades from the industry, his bruises and bandages also allude to the fact that he is paying a hefty price for fame. Furthermore, the fact that he is constantly dressed in red – the color occultly associated with sacrifice – confirms this fact.

His Super Bowl performance was the perfect conclusion of this ritual drama: The self-described “Starboy” reaps the full rewards of being an industry darling … but at what cost?

Well, that’s what The Weeknd is all about. Here’s a look at his Super Bowl performance and how it fits win his overarching narrative.

The Weeknd’s performance began with an intro that had dark, ritualistic, and spiritual undertones. 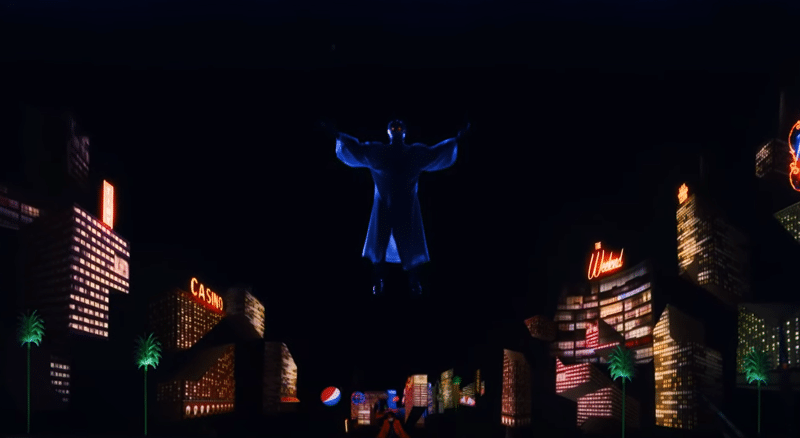 A robed figure with flashing red eyes descends from above as we hear religious chanting.

After the descent, the figure joins many other red-eyed “angels”.

Then, the set opens up and The Weeknd emerges surrounded by light.

According to ex-NFL player Larry Johnson, this display had a biblical meaning.

Satan’s fall from heaven w/ his fallen angels, and Abaddon/Abel, coming from out of the bottomless pit.

It’s like they know the Bible well enough to tell you what parts they enter in at and they stop just before the part where they lose. Haha.

Whether or not this display was a direct reference to Revelation 9 is up for debate. However, this bizarre intro definitely conveyed a dark spiritual meaning.

In this biblical context, The Weeknd begins his performance with the song Starboy. Considering the main message of this song, it was a perfect choice to begin the show.

As explained in my article The Occult Meaning of The Weeknd’s “Starboy”, the song is basically about The Weeknd selling his soul to become an industry “star”. The cover art of the single sums everything up: 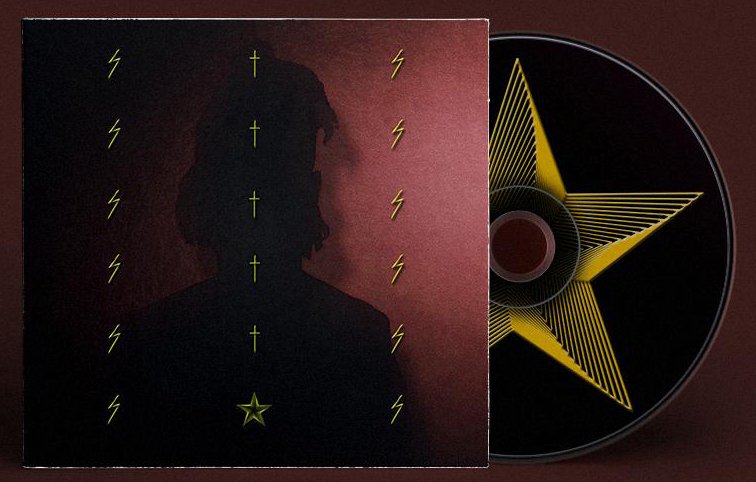 Then, The Weeknd performs The Hills – a song about drugs and general Hollywood decadence. In the video, he meets a Satan-like character who offers him a deal. The song also contains references to Wes Craven’s movie The Hills Have Eyes which is about cannibal mutants who stalk and kill unsuspecting people … reminds me of the Hollywood occult elite.

While The Weeknd sings The Hills, the unholy “choir” bounces around while making praying hands. Black mass.

After this display of pseudo-satanism, The Weeknd goes back into the “abyss” he emerged from. There, he sings Can’t Feel My Face. Here’s a tweet summing up this situation. 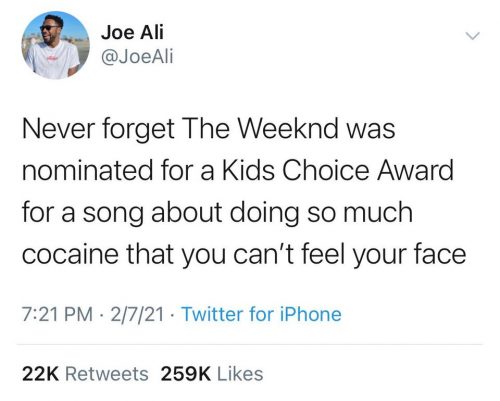 Then, it gets crowded.

The Weeknd is surrounded by a bunch of clones dressed like him, but with bandaged faces.

Who are these dudes and what do they want from us?

In a recent interview with Variety, The Weeknd briefly explained the meaning of the bandages.

“The significance of the entire head bandages is reflecting on the absurd culture of Hollywood celebrity and people manipulating themselves for superficial reasons to please and be validated.”

This is a typical mass media explanation that brushes on the topic while avoiding the darker aspects of the narrative. To fully understand what is going on here, we need to look at the imagery surrounding The Weeknd’s latest album After Hours.

The album After Hours was promoted with numerous music videos and short films that combine to tell a dark and enigmatic story. I won’t go into an in-depth analysis of this material because we’ll be here all day. To sum things up quickly, the story involves The Weeknd running around Las Vegas while high out of his mind and being possessed by a demon.

He also gets beaten up by mobsters and, eventually, he gets decapitated by a woman. Then, two Hollywood girls find The Weeknd’s head on the street and … they get weird with it.

It actually gets much worse.

Then, the girls kill a male stripper and attach The Weeknd’s head to the body. Then they have sex with that thing … with blood all over the place.

Throughout this horrific imagery, there’s a commentary about Hollywood and the price of fame. The Weeknd blurred the line between himself and his persona by appearing in public events with bandages on his face, hinting at the fact that there’s a real-life meaning to his story.

After spending some time hidden behind bandages, The Weeknd emerges transformed in the video Save Your Tears.

In Save Your Tears, The Weeknd’s face is swollen and deformed. There are scars on the side of his face which allude to the fact that he’s been “reconstructed”.

In this video, The Weeknd performs for guests wearing Venetian masks, in a setting reminiscent of the movie Eyes Wide Shut … which is about the occult elite’s satanic practices.

The Weeknd was surrounded by an army of clones.

Why were there so many clones? Is it, perhaps, a reminder that The Weeknd can be replaced by the elite at any time? After all, in order to become a “Starboy”, he had to undergo a profound transformation which completely denatured him. The process involved drugs, violence, torture, demonic possession, and dissociation (represented by decapitation). The Weeknd’s grotesque face in the video Save Your Tears is a representation of the artist’s distorted soul after going through the trauma required to become an industry darling. And if he ever rebels against the system that made him, another clone is ready to be programmed to take his place.

The Weeknd’s Super Bowl performance appears to be the conclusion to a narrative that has been going on for months. Through music videos and live performances, the singer has been telling a story about fame, fortune, and the true cost of it all. This story was amplified and “validated” by mass media itself as he was given the opportunity to play out his persona on the biggest stages on Earth. After winning awards and appearing in countless media events while in character, The Weeknd brought his dark persona to the masses during the Super Bowl Halftime show.

The moral of the story: Selling your soul is totally worth it … until you get decapitated. More importantly, the show is a reminder of who actually rules the “entertainment” that we’re supposed to consume while in lockdown.

Oh, and the Buccaneers won the Super Bowl.

FacebookTwitterSubscribe
Related Topics:featuredsuperbowlthe weeknd
Up Next