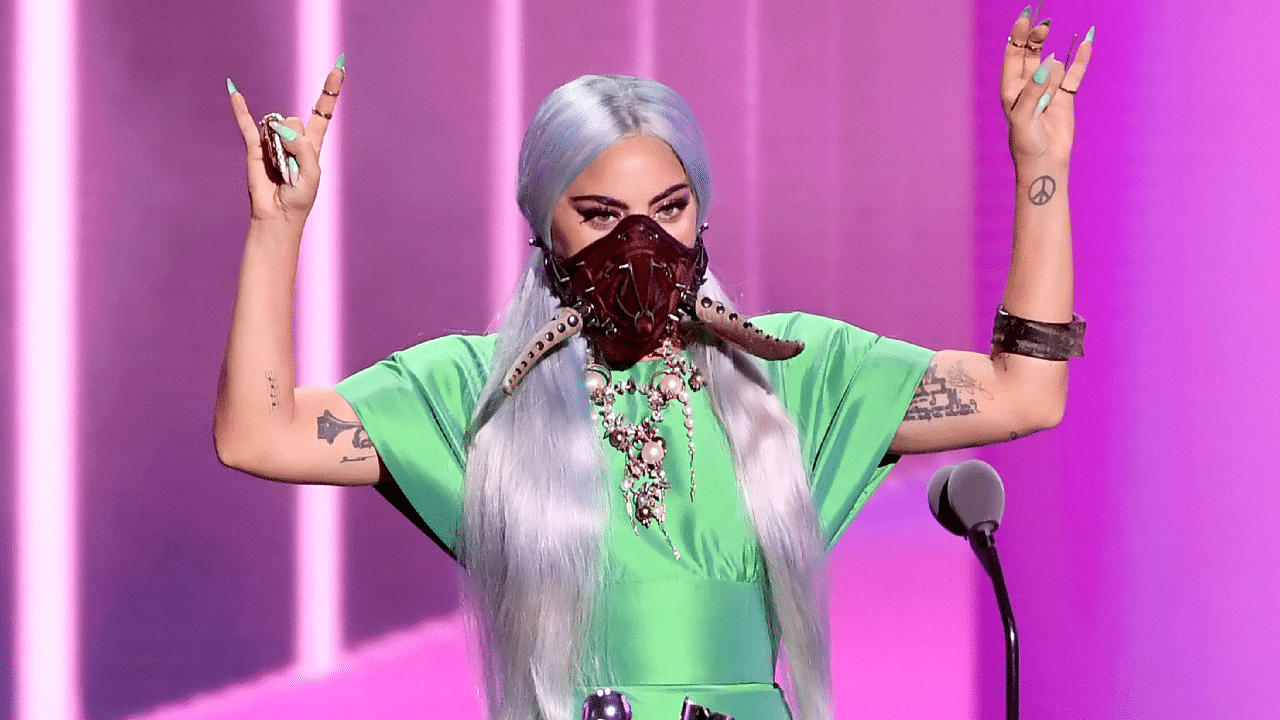 Nearly every year, I publish an article about the VMAs because they always perfectly sum up the various toxic agendas that are being pushed by the occult elite. However, this year, I completely forgot about the VMAs. And, apparently, a lot of people did too because this year’s ratings hit an all-time low. Indeed, ratings dropped 5% compared to 2019, which was also an all-time low. In fact, the VMAs have been hitting all-time lows every year for the past three years.

The 2020 VMAs only reached 6.4 million viewers (compared to 11.4 million ten years ago) despite the fact that, for the first time ever, it was simulcasted on MTV, VH1, BET, BET Her, CMT, Comedy Central, Nick At Night, TV Land, MTV2, Logo, Pop, and Paramount Network. They really wanted people to watch this show. On the other hand, MTV has been doing everything in its power to make the VMAs as abrasive and annoying as possible in the past years. They stripped everything that was somewhat fun, cool, and interesting from the show to gradually introduce heavy-handed and thoroughly divisive propaganda that comes directly from the occult elite.

This year, COVID hysteria added yet another layer of oppressive madness to the mix. The result: The 2020 VMAs appear to come straight out of a dystopian movie. Imagine a scene where brainwashed masses watch state-sponsored propaganda disguised as “entertainment”. That’s what happened with the VMAs.

Due to COVID restrictions, the show consisted of pre-recorded segments filmed in front of green screens, which made the entire thing look like a bad children’s TV show. To make things worse, the fake audience noises added a surreal and unsettling vibe to the show.

The show could have been salvaged if it focused on fun and music. But it was not. The 2020 VMAs were plagued with incessant and relentless political messages that made one point clear: It was not entertainment, it was propaganda.

Everything about the 2020 VMAs was so fake that, above all the messages that were thrown at the viewers, one clearly stood out: “We are deceiving you”.

At the beginning of the show, host Keke Palmer enters a “stage” that is completely computer-generated.

Then, she turns towards the fake crowd to her right.

We then see a CGI crowd of blurry, face-less people mixed with fake crowd noises. There were are also fake webcams of people clapping inside their homes. Gotta normalize that lockdown culture.

In this surreal yet oppressive context, there was no space for freedom or improvisation. Everything was rehearsed and calculated. Usually, the hosts of the VMAs deliver an edgy comedy routine that makes fun of celebrities and current trends. Not this year. After one weak joke about how 2020 is bad, the host went straight into an elite-sponsored speech. I will spare you the entire propaganda session but it ends like this:

“We must continue to fight to end systemic racism. The leaders of that movement are you, us, the people that are watching tonight”. ** Fake crowd applause **

Not unlike everything surrounding the host, that line was a lie. The leaders of this “movement” are not you, it’s the global elite. And it is using its industry pawns to aggressively push its agenda of division and race wars.

DaBaby’s performance features him jumping on a police car while the city around him is on fire. They’re condoning Antifa-led riots.

Then, TheWeeknd came out to accept an award and brought his messed up face with him.

To accept his award, TheWeeknd came out dressed exactly like in his Blinding Lights video, complete with fake makeup bruises (he gets beaten up in the video). As seen in my previous articles about TheWeeknd, most of his videos allude to the dark side of the music industry. His latest videos remain within these lines.

“It’s really hard for me to celebrate right now and enjoy this moment, so I’m just gonna say justice for Jacob Blake and justice for Brianna Taylor”. ** fake applause ***

So, TheWeeknd came out in costume and in full makeup, stood in front of a green screen, and said these rehearsed lines for the camera. It was a performance. It was fake and staged. It was a way of telling young viewers that there is no more space for fun and happiness in 2020.

Of course, police should refrain from killing citizens. And those who do need to be prosecuted to the fullest extent of the law. However, these events are currently being exploited and instrumentalized by mass media to push an agenda that goes way beyond police brutality.

MTV apparently really wanted TheWeeknd to come out again and redo this whole charade. So they gave him the award for Best R&B Song – despite the fact that Blinding Lights is clearly a pop song. However, Lady Gaga absolutely needed to win Best Pop (more about her later) so they gave him R&B because he’s black (those who yell racism the loudest are usually the most racist ones).

So, to accept the Best R&B award, TheWeeknd came out again with costume and makeup and repeated the exact same words in front of the green screen. I wouldn’t be surprised if they recorded both acceptation speeches one after another. As stated above, the 2020 VMAs left absolutely no space for improvisation or for self-expression. Just say the lines for the camera and get off the stage.

Other than the Soros-funded BLM propaganda, there was also WHO-funded COVID propaganda. To celebrate the “lockdown culture” that the elite is forcing on the world, MTV created a bogus category: “Best Video From Home” … presented by Coors Light (I’m not making this up).

A screenshot from Blink-182’s video Happy Days. Such a moving work of art.

Later, actress Sofia Carson came out to present yet another bogus category “Video for Good”. The award was preceded by a dystopian speech:

“The artists in this category used their platform for the greater good. And, in doing so, have inspired us all”.

Of course, the “greater good” means whatever is in line with the occult elite’s agenda.

One of the nominees was Billie Eilish’s video all the good girls go to hell. While this video is said to be about “global warming”, it is mainly a celebration of Lucifer on earth (read my article about this video here).

The winner of the “Video for Good” category was I Can’t Breathe by H.E.R. The singer was then praised by Sofia Carson for “amplifying the Black Lives Matter movement”.

As stated in previous articles, BLM is funded by George Soros’ Open Society Foundation to drive a wedge in American society, to sour racial relations, and to justify the actions of its most extreme factions such as Antifa. Elite-owned MTV just gave an award to outright propaganda.

Then, there was Lady Gaga.

Lady Gaga was trotted in and out of the stage every 10 minutes. It was ridiculous. This Gaga-fest culminated with the Tricon award (whatever that means) which crowned Lady Gaga as a Grand Priestess of the music industry.

A couple of months ago, Lady Gaga was the face of Together At Home, a show funded by the WHO which contained heavy-handed globalist propaganda (read my article about it here). A few months later, because we live in a creepy dystopian world where only one artist is allowed to shine, Lady Gaga is also the face of the VMAs. However, we did not really see her face because she kept hiding it behind all kinds of masks and muzzles. Other artists and presenters did not wear masks on camera because it was unnecessary. However, she wore a mask 100% of the time to promote the WHO’s COVID hysteria agenda. 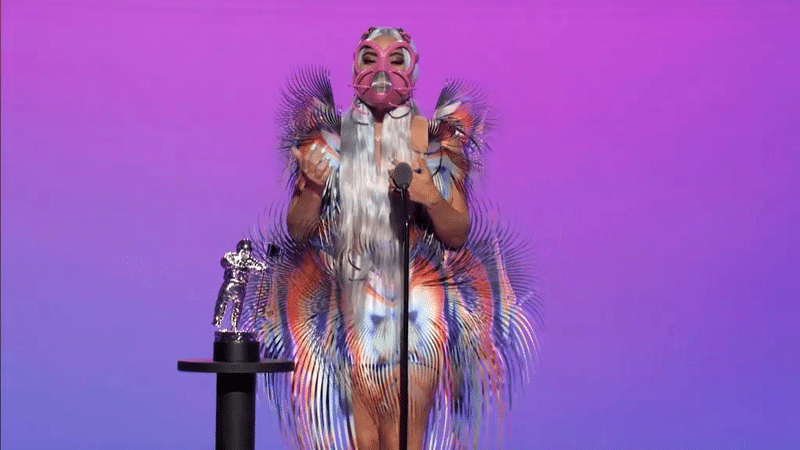 Lady Gaga accepts an award while wearing an exaggerated and unnecessary mask. In a massive show of fakeness, Gaga acts all surprised every time she accepts an award as if she didn’t know in advance. 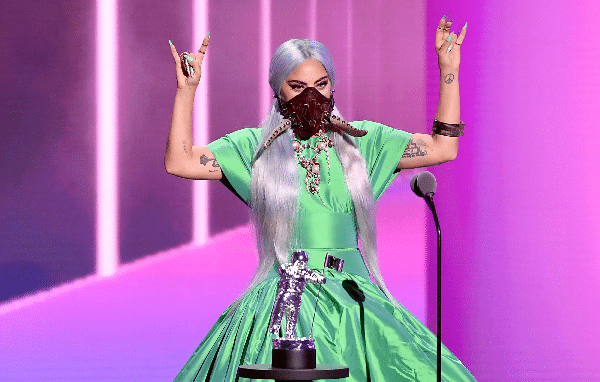 This picture sums up the 2020 VMAs. Lady Gaga throwing devil horn signs while wearing a tusked mask that might very well be a horned mask. 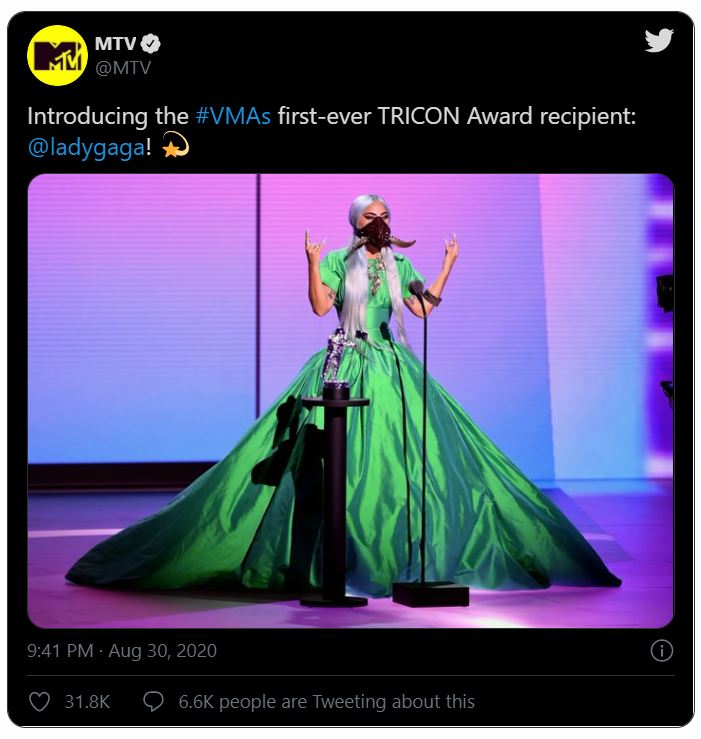 MTS chose this picture to promote its show. They know it is extra symbolic.

Gaga accepting the “Tricon award” while wearing a “crown”. During her endless acceptance speech, Gaga points at the camera and yells orders through her mask as if she was Darth Vader.

At the end of her speech, Gaga says:

Interesting fact: Gov. Andrew Cuomo allowed the artists that appeared at the VMA to bypass his state’s strict 14-day coronavirus quarantine for out-of-state travelers. In other words, while hard-working Americans need to submit themselves to draconian measures for the sake of COVID, the elite’s pawns can hop on private jets and bypass all of this. Then Gaga has the nerve to lecture us.

Other than her countless speeches, Gaga also gave a performance that appeared to go on forever. And, of course, it was symbolic.

Gaga is in her living room … while wearing a muzzle. Apparently, she doesn’t remove it ever.

Gaga then slides down to a room full of dismembered mannequins. As explained in previous VC articles, mannequins are a classic symbol representing MK slaves. She’s part of them.

After the song, Ariana Grande goes inside the MK tube full of mannequins and disappears. Lady Gaga reappears with a different outfit because she has to sing yet another song.

Gaga plays on a piano that is made to look like a human brain. They’re literally playing with our minds.

Ending on a Bad Note

The people behind the VMAs managed to find the worst possible way to end this abomination: A performance by the Black Eyed Peas.

What do you do when your song is weak? Shove a lightstick down your pants. That should entertain ’em.

The camera even awkwardly zooms in and stays there for an awkward amount of seconds.

The show ended with way too much CGI graphics combined with a whole lot of fake applause.

Oh, good aliens. Please abduct the Black Eyed Peas and everyone else involved with this show.

If you’re someone that values realness and authenticity, the 2020 VMAs was an utter abomination. Everything about that show was a lie while also showcasing how fake these people can be.

I realize that those behind the show had to deal with unprecedented sanitary (sanity?) measures but they clearly went in the worst direction possible. Instead of focusing on fun, music, and entertainment, they focused on fear, division, and relentless propaganda.

Instead of celebrating art, freedom, and the healthy rebelliousness of youth, the 2020 VMAs was an oppressive and dystopian abomination that called for extreme compliance and submission to specific agendas. If one didn’t know better, the VMAs looked like an experiment in social demoralization conducted by a bunch of psychopaths.

And who better to promote this crap than a bunch of muzzled, mind-controlled industry slaves? The silver lining: Nobody cares about the VMAs anymore. ** fake applause **