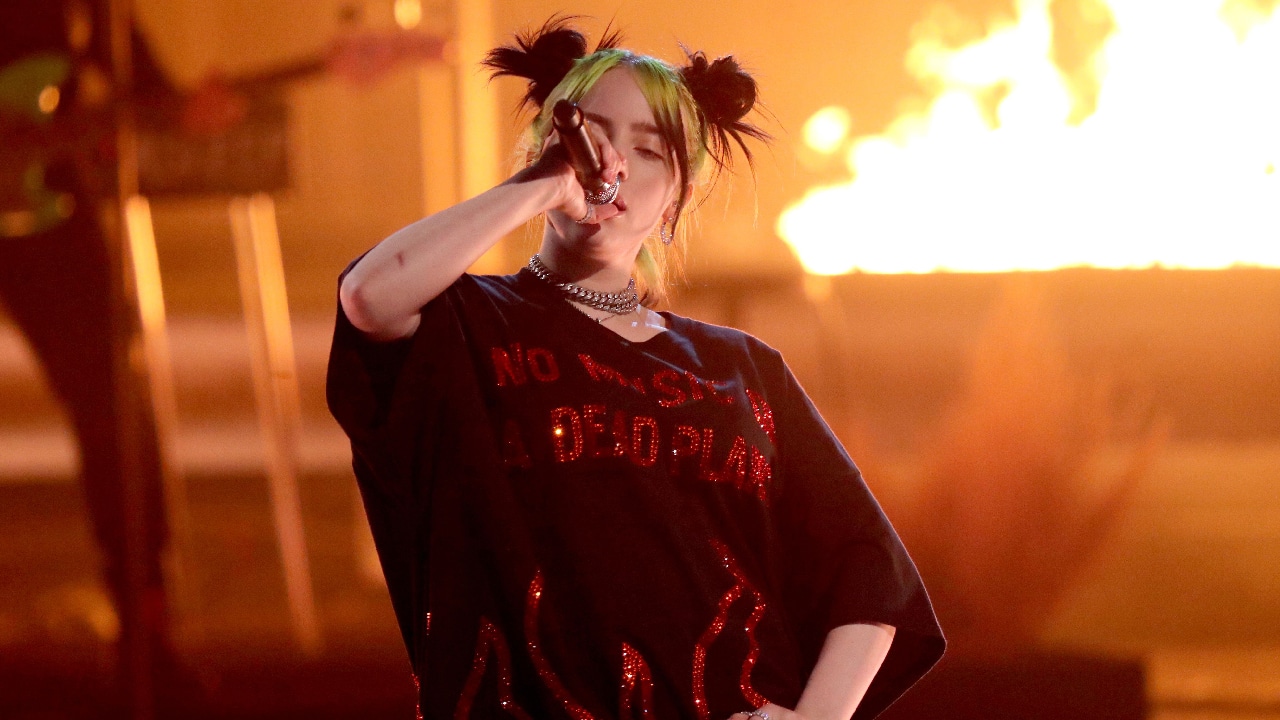 Before the 2019 AMAs even started, I knew exactly what would happen: The same seven artists would be paraded on and off the stage, the same mind-numbing agenda would be promoted shamelessly and the same pseudo-satanic symbolism would a central part of the performances. And, unfortunately, I was right.

But I was not expecting how right I would be.

The 2019 AMAs was a satanic extravaganza mixed with a whole lot of “woke” brainwashing. And, to top it off, there was a recurrent theme that was difficult to ignore: Hell. Like, literal hell. Indeed, several performances featured artists performing in actual hellfire. And, when there was no hellfire, we had to suffer through another kind of hell: Virtue signaling. Heavy-handed and contrived virtue signaling.

If you did not watch the AMAs, you did good because you did not miss anything. Except for a boatload of agenda-pushing. Here are the lowlights of this three hours of hell.

Something was wrong with Selena Gomez.

The 2019 AMAs began with a horrendous performance by Selena Gomez who sang off-pitch for a good couple of minutes. Then, she started dancing and, compared to her backup dancers, she was off-beat and sluggish. In short, she seemed completely out of it. The following day, some media sources claimed that Selena had a “panic attack” right before the performance.

A Buzzfeed headline about Gomez having a “panic attack”.

The performance was reminiscent of Britney Spears’ terrible performance at the 2007 VMAs where she appeared as sluggish and “out of it” as Selena Gomez.

There are lots of similarities between the two: Both are ex-Disney child stars who became high-level industry slaves. Both had “mental issues” that are probably symptomatic of a deeper issue (Monarch mind control). Both have been used for years to push the Beta Kitten agenda (see Selena’s disturbing video Fetish).

In short, the first performance of the VMAs was difficult to watch. It was a fitting introduction to a hellish night. 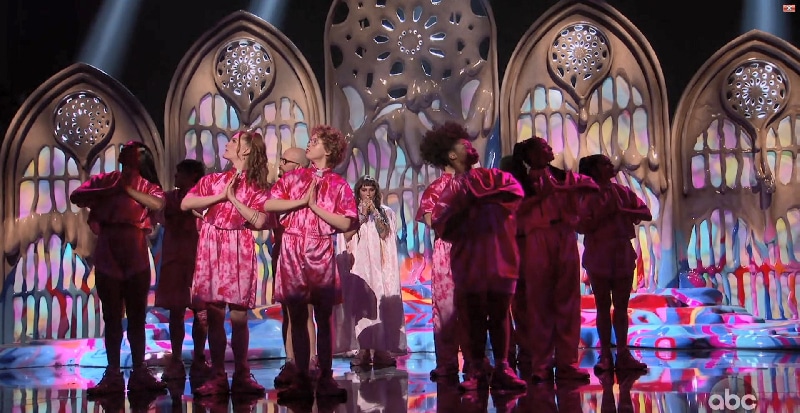 Kesha performs in a church that is “melting” into rainbow colors.

Every time I think about Kesha, I get a little sad. Luckily it doesn’t happen too often. But, when I do, I get reminded of how she fought to free herself from the super-producer and MK handler Dr. Luke … to then end up more of a slave than she ever was. As stated in the article Kesha’s “Praying” is a Sad Reminder That She is Still Owned by the Industry, the first video she made right after the Dr. Luke debacle was a clear confirmation that she was still owned and controlled.

At the AMAs, Kesha performed a song appropriately titled Raising Hell. The performance began with Kesha saying “Welcome to OUR Sunday service”, which appears to be a dig a Kanye West’s recent Sunday services. However, Kesha’s service is not about Jesus. As the title of the song suggests, it is about the opposite.

At the beginning of the performance, Kesha stands in a church that is melting to rainbow colors – a symbolic image alluding to the “dissolving” of Christianity to create a new “woke” religion.

Around Kesha is a cast of carefully selected dancers, ranging from “gender-neutral” people to men dressed in pink robes. Then, Kesha sings lyrics that are rather blasphemous.

Hands up, witness
Solo cup full of holy spirits
Something wicked (ooh)
Speaking in tongues in my blood-red lipstick

Kesha’s backup dancers do devil horns when she sings “I don’t wanna go to Heaven without raising hell”.

Then, Big Freedia – a rapper who performs in drag – comes out and drops some rhymes.

Yeah, that’s intended for strippers who “hit the pole with it”.

At the end of the performance, the background because fiery-red and the dancers drop dead.

In short, this performance was a thinly-veiled satanic black mass (which is based on the desecration of Christian mass).

Then, the AMAs kept the darkness going with another industry pawn. A brand new pawn that is loved by children and tweens.

Billie Eilish’s performance was basically about the world slowly turning into hell.

Although the words mumbled by Billie during the performance were barely intelligible, she says some dark stuff.

Despite its obvious satanic undertone, the song is marketed as being about global warming. 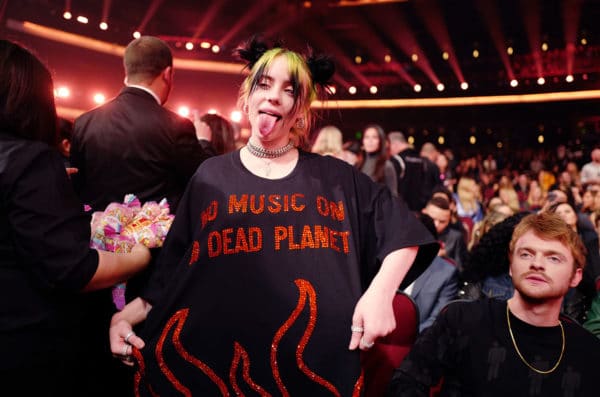 Billie wore a shirt that said “No music on a dead planet”. It is a perfect reflection of the bleak and depressing world outlook that is being taught to children.

The performance ended with Billie being raised on a platform as the whole set caught on fire. 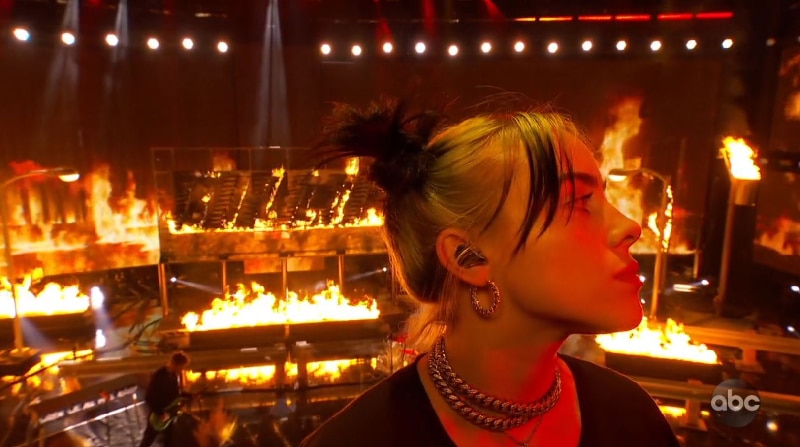 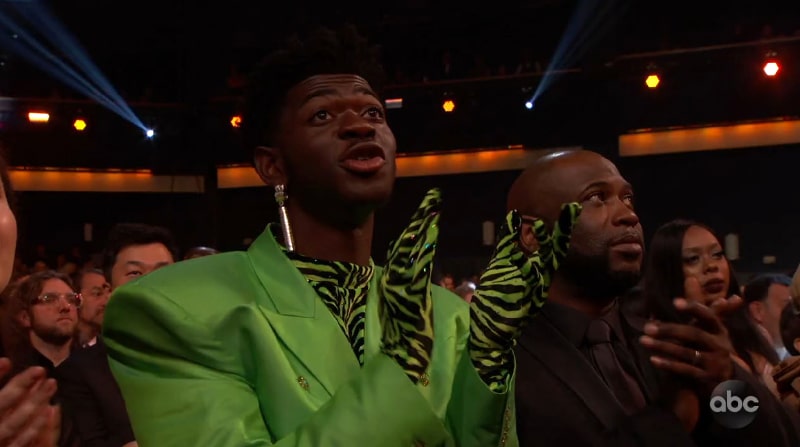 Lil Nas X (who was dressed like my aunt Nancy in 1984) was very entertained.

In short, Billie’s performance was about a new industry star singing about being possessed by Lucifer as the world burned. And that was not even the most symbolic performance of the night.

For the past couple of years, Camila Cabello has been one of the “chosen ones” of award shows. She’s everywhere. She performs, she presents and she gets tons of close-up shots when she’s in the crowd. Also, she’s now in a hot relationship with Shawn Mendes, which is the perfect PR stunt to get her more media attention.

However, that sweet spotlight time comes at a price. And her performance of the song Living Proof is … “living proof” of this. 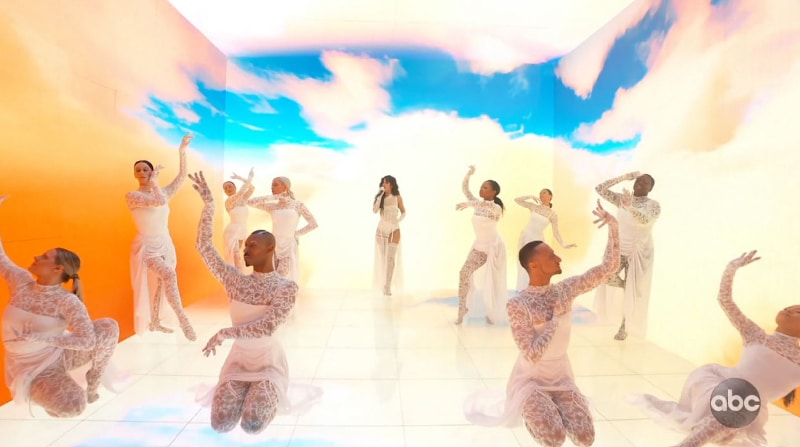 The performance began in a “celestial” setting with everyone dressed in white – color of purity and innocence. Yes, there are men wearing a white dress. The gender-blurring agenda is unavoidable.

Like a choir singing “Hallelujah”
When my body’s crashin’ right into you
When we align, ooh yeah
Do you feel me?
Can you feel me?
‘Cause I can’t breathe

The industry loves to sexualize anything godly. It is part of its satanic mindset. The word Hallelujah has an ancient sacred quality to it as it means “God be praised”. In this performance, it is used repeatedly in a dark and sexual context. 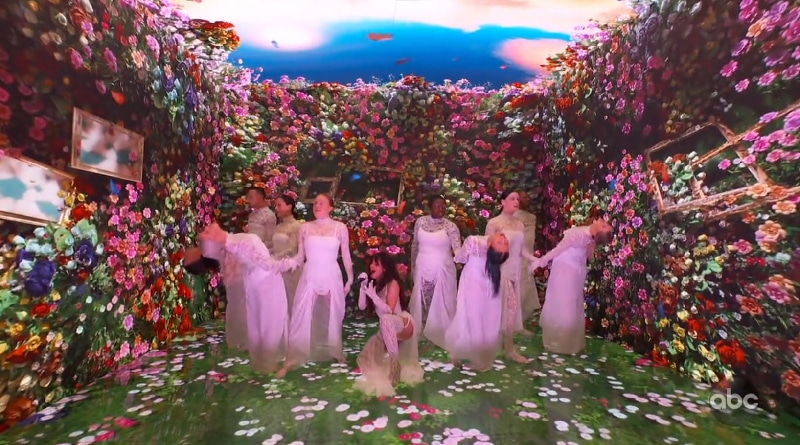 Later, the performers are surrounded by greenery, illustrating the fact that they’ve descended from heaven to Earth.

Then, things get symbolic. 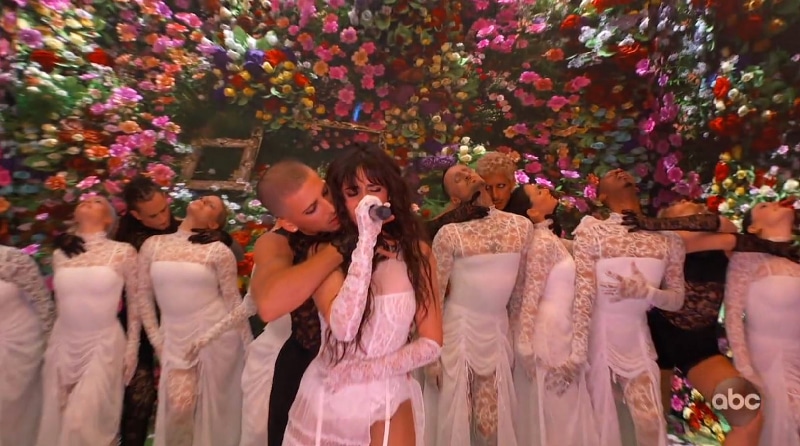 People dressed in black grab the white-clad performers by the throat. Evil takes over goodness and purity. 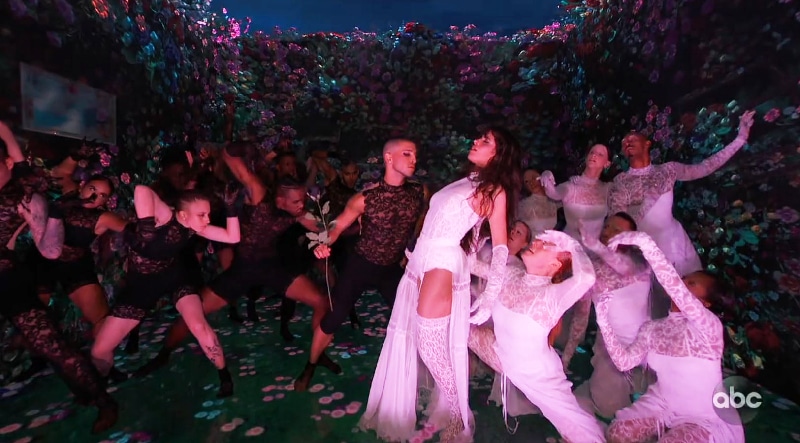 As the sky gets dark, Camila is offered a black rose – symbolizing the “dark side”. Did she accept it? 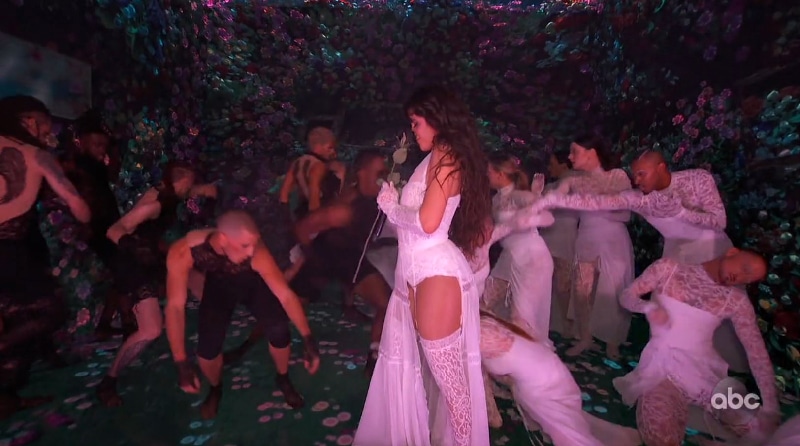 Of course, she did. She’s an industry pawn.

Then all hell breaks loose. Literally. 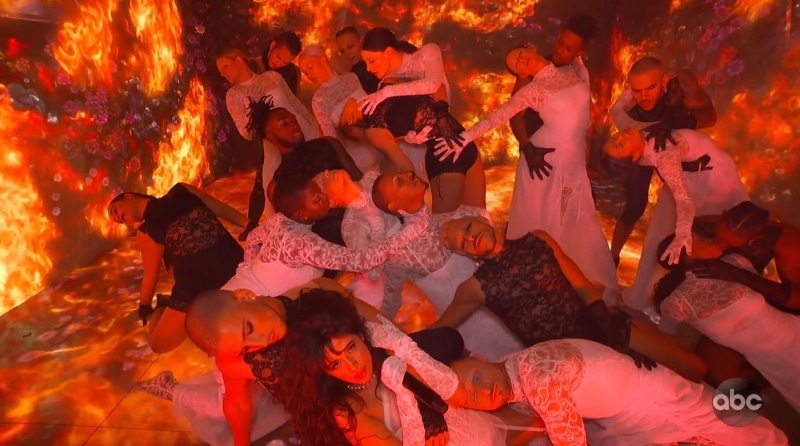 Everything catches fire and everybody has sex with everybody else.

The entire performance embodied the classic narrative of the “good girl gone bad” that has been highlighted on this site countless times. Every pop star who wishes to ascend to superstardom must be associated with this kind of narrative.

The Prince of Darkness and His Minions 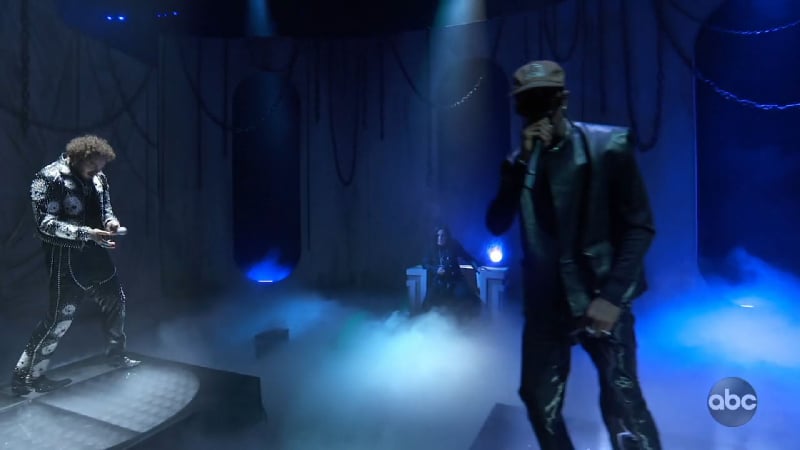 Post Malone’s performance took place in a dungeon-like setting with chains hanging all around, conjuring images of pain, torture, and slavery. Ozzy Osbourne – known as The Prince of Darkness (which is also the title given to Satan) – sits on a throne as his “minions” perform on each side of him. Ozzy’s chorus goes like this:

Guess what happens at the end of the performance? 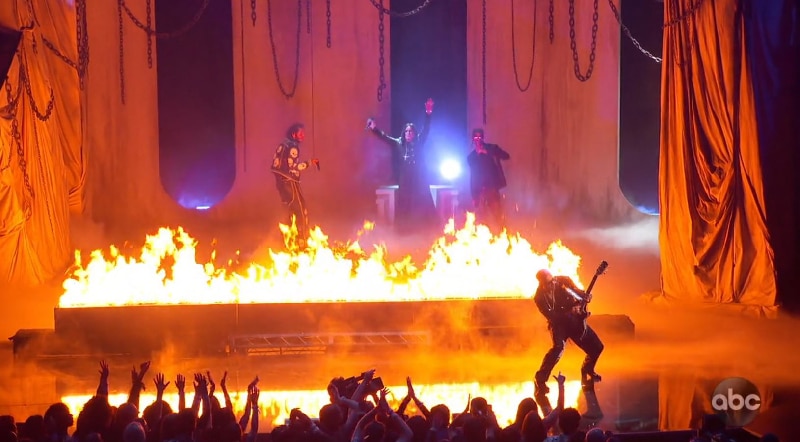 In short, this performance introduced two of the biggest artists in rap to the dark side of the industry.

The 2019 AMAs had a clear recurring theme and it was “hell”. More specifically, hell on earth. Through its ungodly agenda, the elite is effectively trying to bring hell on earth by straying humanity away from everything that is good, pure and sacred to push it towards the evil, the sick and the corrupt.

These award shows serve two purposes: On one hand, they showcase industry pawns as they perform about their owned slavery. On the other hand, they give the most useful pawns shiny trophies to tell other artists: You could have this too if you follow our rules.

Oh, and another proof that this show was literal hell: Taylor Swift was given the “artist of the decade” award. And she performed for about 10 minutes. Hell.

The Disturbing Hidden Meaning of “Lola” by Iggy Azalea