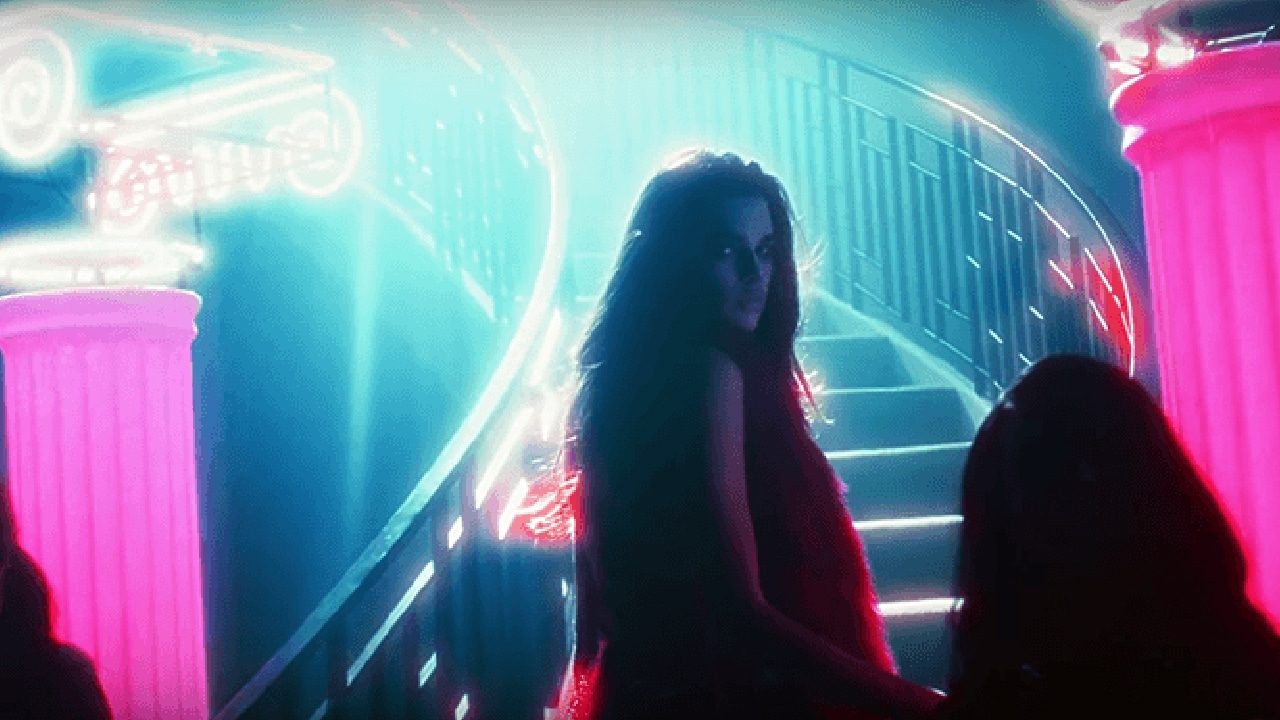 The Weeknd’s video Party Monster is described as a “psychedelic trip” but, beyond the colorful visual effects, are symbols with a profound occult meaning. We’ll look at the deeper meaning of these symbols and the story they tell.

Party Monster features The Weeknd walking around a brothel while occult and religious symbols flash on screen. The video features the same imagery as his previous release, Starboy, which prominently featured a panther and an illuminated cross. In Party Monster, these symbols are used again, which indicates that these two videos are part of a larger overarching story. Not unlike The Weeknd’s previous album, which was promoted with a video trilogy that told an esoteric story (see my article The Meaning of The Weeknd’s video trilogy “The Hills” , “Can’t Feel My Face” and “Tell Your Friends), recurring images are used to give the story a deeper meaning, one that alludes to the spiritual realm.

In Starboy, The Weeknd destroys his own house and belongings using an illuminated cross and then drives away in a sports car. As I explained in my article about Starboy, the cross did not signify that The Weeknd became a devout Christian. Quite to the contrary, there’s a dark occult undertone to the video which is even more emphasized in Party Monster. In short, it is about selling one’s soul to dark forces in order to reap the rewards of material success. In Party Monster, The Weeknd enters deeper into the world of drugs and prostitution. Let’s look at the video.

The music industry loves terms like “monster” or “animal” (i.e. Lady Gaga’s “Lil’ monsters”). It is dehumanizing and a perfect way of describing people who sold their soul to the industry and its corrupt ways. Kanye West’s video Monster is one of the most graphic examples the industry’s obsession with death, torture, necrophilia and cannibalism and other practices (it was never officially released because it was too … real). 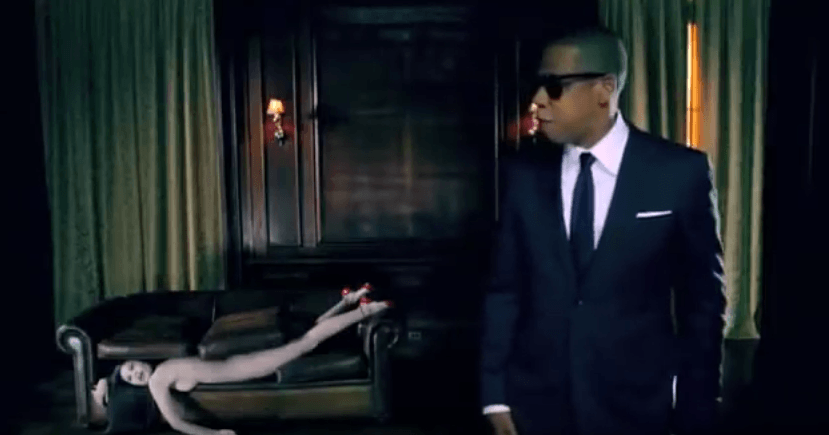 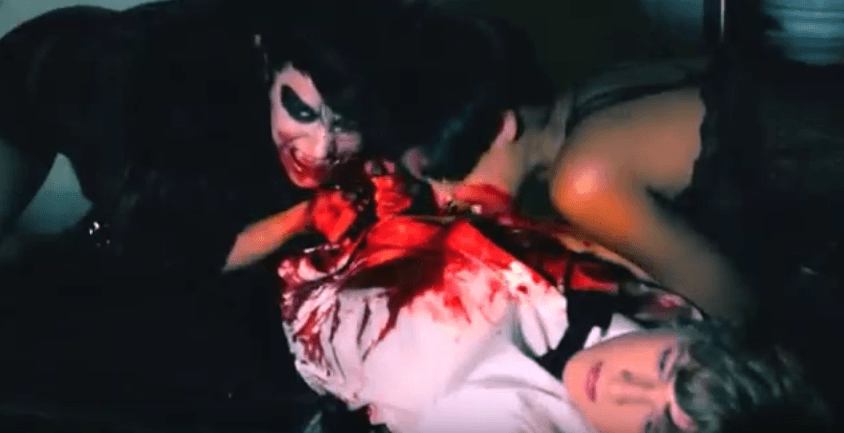 Another disturbing screenshot from Monster.

While The Weeknd’s Starboy was about occult initiation, Party Monster shows how the process turned him into a monster … who parties … which of course makes him cool. As we’ll see, The Weeknd finds himself deep into the occult elite’s underworld, complete with call girls and, of course, One-Eye symbolism.

The video begins with The Weeknd arriving in a cool sports car. He’s in a desert which hints that he might be around Las Vegas, a place known for hosting legal brothels, which is where The Weeknd appears to ends up.

The Weeknd follows a big neon cross to where the girls are.

Inside the ranch, neon fire gives the place a hellish feel. His eyes (and those of the girls) glow, making them appear to be soulless monsters.

Speaking of eyes, one symbolic scene sums up the entire video.

One of The Weeknd’s eyeballs flies out towards the viewer. The ubiquitous One-Eye sign tells us that The Weeknd is owned by the occult elite.

Later, The Weeknd party with a cake topped by an eyeball.

This focus on eyeballs, which represents the occult elite’s system, is strongly reminiscent of the movie Neon Demon, which deals with the same sick obsessions (read my article about it here).

While some girls stuff their faces with handfuls of cake, other girls are being even weirder.

A quick closeup of that face shows that it is similar to the classic depiction of Jesus Christ.

Jesus Christ looking to the heavens while wearing the Crown of Thorns.

While I cannot 100% confirm that the sculpture is intended to look like the face of Jesus, it would certainly be fitting in a video that revolves around the corruption of the crucifix.

While The Weeknd has lots of girls to chose from, he is, once again, guided by the cross.

The Weeknd is immediately mesmerized by a girl wearing giant cross earrings.

The girl gets The Weeknd to follow her upstairs, where the rooms are located. Once again, things take on an esoteric meaning … to those who understand the symbolism.

The girl climbs a staircase that is between two columns, recreating classic Masonic imagery. 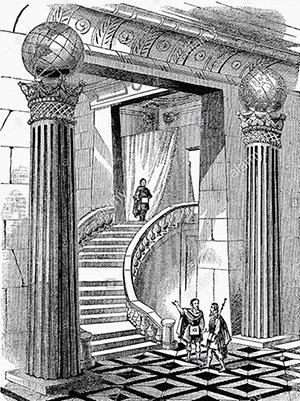 A typical Masonic engraving representing an initiate passing the twin pillars Jachin and Boaz to climb the Winding Stairs.

By referring to Masonic imagery, the video gives this “party” a twisted esoteric meaning. While the Masonic staircase is supposed to lead spiritual illumination, the staircase in the video leads to doing it with a call girl. Are they about to partake in the occult practice called “sex magick”?

Inside the room, the girl is not really there. The Weeknd is instead faced with a big cat.

In a seemingly non-nonsensical scene, a panther emerges from a TV, preceded by female lips.

When he falls on his bed, The Weeknd sees the girl above him (inside a cross) instead of the panther.

This scene basically tells us that the girl wearing a cross is a Beta Kitten – an MK slave programmed to “service” people, another of the elite’s twisted practices (more information about Monarch Programming in this article). The lyrics of the song are also about hooking up with a stripper.

At one point, The Weeknd and the girl apparently decide: “Hey let’s go outside and race exotic cars”.

The girl stands next to a yellow Lamborghini and is ready to race.

The new best friends push the proverbial pedal to the proverbial metal but The Weeknd suddenly brakes and gets out of the car. The girl keeps going … and is gone.

The Weeknd watches on as the yellow car falls off a cliff. As you can see, this is making him very emotional.

So, chances are, the girl is dead. What happened though? Did she do it on purpose? Did The Weeknd trick her? Was it an accident? No matter what the case may be, victims of Kitten programming often have a short lifespan. They are either disposed of when they stop being useful or their programming breaks down and things become ugly. Some manage to survive all of this – the lucky and the particularly strong ones. The girl in the video however apparently did not survive this. And The Weeknd watched it all. What a party monster.

While Starboy was about transition towards a new version of The Weeknd, Party Monster is about going deeper into the sick bubble that is the occult elite. Steeped in the same symbolism we’ve reviewed countless times here on Vigilant Citizen, the video depicts the elite’s underworld as a brothel where exploitation and corrupt spirituality intertwine in drug-and-sex-fueled decadence.

While this might appear fun to some, the party is actually attended by beings who have sold their souls and girls programmed to please elite clients until they are deemed useless. Ironically, this is exactly what happens to music industry pawns. Stars are used to make the occult elite’s world attractive to young people until they stop being cool. They are then figuratively thrown off a cliff to make way for the new party monster.