Beyoncé’s performance at the 2016 VMAs was a medley of her latest offering “Lemonade”. Not unlike the visual album itself, the performance featured occult symbolism while pushing more of the race wars agenda.

The 2016 VMAs did not bring much excitement to music fans – just a bunch of stale and predictable songs performed by a bunch of stale and predictable pop stars. However, Beyoncé’s performance, with its length, scope and grandeur clearly stood out from the rest. It was as if the people at MTV made sure that all of “oohs” and the “ahhs” were reserved for Beyoncé who, once again, had to be the queen of the show. Music awards likes the VMAs know exactly what the news headlines will be the following day. And, this year, it had to be about Beyoncé.

Beyoncé’s visual album Lemonade contains a bunch of symbols and messages the elite wants the population to absorb and the VMAs made sure that it was properly celebrated. As I described in my article The Occult Meaning of Beyoncé’s “Lemonade”, the visual album is replete with occult symbolism placing Beyoncé in a dark and transformative ritual while bringing her legions of fans to follower her. Where is she taking her fans? Let’s look at the performance.

Beyoncé’s VMA performance recreated most of the ritualistic elements of Lemonade, complete with the same color codes. It was, however, shorter and more obvious.

The performance began in classic ritualistic fashion: Beyoncé and her ladies dressed in virginal white garments representing purity and innocence.

The occult elite’s rituals are about soiling purity and innocence in order to bring about dark metaphysical change. One by one, the girls around Beyoncé get shot and die, falling in a pool of red light.

In the end, everyone is dead except her. She is the “chosen one”. A hooded man marches towards her.

The hooded man brings Beyoncé forward and lets her go as if saying “This is the path you must take”.

After the stage of purity (white), ritual sacrifice (red) comes occult transformation (black). Beyoncé is now doing what the industry expects from her – shaking her booty. The good girl has gone bad – the industry’s favorite narrative.

In the first scene, the ladies dressed in white dresses getting shot is said to represent the killing of Black people at the hand of police. But the symbolism goes deeper than this. If you’ve read previous articles on Vigilant Citizen, you already know that the occult elite’s rituals are coded in three colors: White, red and black. And this is exactly what happens here.

Beyoncé is not “taking a stand” against anything, she is taking part of a twisted ritual that mixes the occult elite’s obsession with blood sacrifice with the actual suffering of real people in the real world. In short, she is on the side of those who actually allow these horrors to happen: The elite. 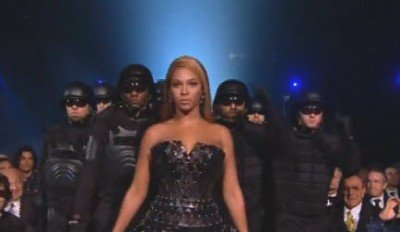 A few years ago, Beyoncé appeared at the Grammy awards surrounded by police in riot gear – effectively pushing the police state agenda. Her “opinion” is whatever “They” decide what agenda needs to be pushed.

As the performance progresses, Beyoncé is given a fur coat representing the material gains given to puppets of the industry.

Now that Beyoncé has been selected as a “leader of her people” (as if mass media allowed anybody else in the spotlight), she starts giving orders. Indeed, during the appropriately named Formation she says:

“Now all my ladies get in formation”

And, of course, her ladies do.

Apparently, ladies should blindly follow Beyoncé’s orders. They lay down around her.

As the camera pans out, we realize that the ladies formed a symbol. Well, two of them.

The performance ends with the ladies forming the Venus symbol representing the female sex. Or is it?

On second look, we realize that symbol is separated into two distinct figures: An open circle and an inverted cross. While people in the crowd are in tears, giving a standing ovation, they are actually clapping to an inverted cross, the symbol of Satanism.

This final moment sums up Beyoncé’s entire performance: A twisted and deceptive display filled with double meanings that end up telling the viewers: I’m on their side, not yours.