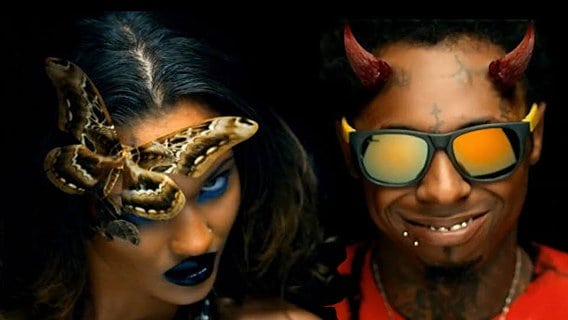 Lil Wayne single “Love Me” (featuring Drake and Future) appears to be another rap song about easy girls and so forth. The symbolism of the video, however, adds a more sinister dimension to the song: It directly refers to Monarch Mind Control, specifically Kitten Programming, and even refers to its techniques. We’ll look at the symbolism of Lil Wayne’s “Love Me”.

At first glance, Love Me appears to be yet another song where rappers brag about how many “hoes” they got. While some might shake their heads at the unoriginality of the subject matter, others might shake their heads at the way women are portrayed in the video. However, I’ll add another reason to shake your head: Love Me refers to the most terrible practice on earth, Monarch Mind Control (if you don’t know what I’m talking about read this article). In short, Beta Programming (also known as Kitten Programming) is used to create brainwashed sex slaves.

This programming eliminates learned moral convictions and stimulates the primitive instincts devoid of inhibitions. This training Program (usually for women) is for developing the “ultimate prostitute”. This is the most used (by the abusers knowledgeable of the Project Monarch) program.
– Mark Phillips, Operation Monarch

As we’ll see in this article, the video contains ALL of the possible symbolism relating to Kitten Programming and it also emphasizes the slave status of the women in the video. Lil Wayne’s girls are literally locked in cages and depicted as animals. They are also shown in situations that subtly allude to actual MK torture techniques that used to traumatize slaves and cause them to dissociate from reality. Of course, everything is portrayed in a cool and fashionable matter, to make sure young people embrace all of this with even realizing it. Let’s look at the meaning of the video.

In the very first seconds of the video, we see a semi-subliminal image that announces what the video is all about.

For about a second, the fire from the lighter takes the shape of a Baphomet head/goat of Mendes. This is a kind of “stamp of approval” of the occult elite and an important symbol used in MK programming.

The song is about how women apparently love Lil Wayne. In the video, they, however, don’t seem to have much of a choice because they are TRAPPED IN CAGES, inside a very dodgy-looking compound.

Future sings about how “b*tches love him”… but he’s not about to free them from their cages. This contradictory scene somewhat relates to how MK slaves are programmed to identify with and even “love” their handler through confusing mind games.

Locking slaves in cages an actual Monarch Programming technique to discipline, traumatize and dehumanize the victims. 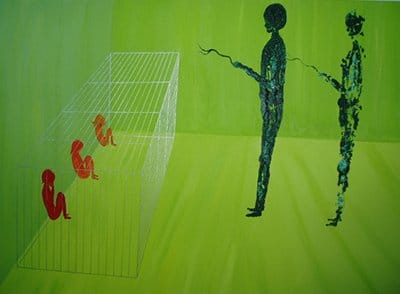 A painting made by trauma-based mind control survivor Kim Noble (from the article The World of Mind Control Through the Eyes of an Artist with 13 Alter Personas) depicting children locked in cages and observed by a handler.

The many close-up shots of girls during the video all somehow allude to an aspect of Kitten Programming. Here are some of them:

This model has a feline print on her face (which is used in mass media to refer to Kitten programming). To make sure you get the message, she also has cat eyes and is licking her “paw”. At this point, the video is basically screaming out KITTEN PROGRAMMING.

Licking a blade is maybe sexily dangerous, but also refers to the mix of inhibiting lust and physical abuse involved in Kitten Programming.

Kittens are trained to truly embrace their state of servitude. This model appears to be loving her chain very much. A little too much.

This model has a huge butterfly covering one of her eyes, which is probably the most blatant reference to Monarch mind control in the video.

In the video, Lil Wayne somewhat plays the role of the handler, where he’s basically in control of these mesmerized women. 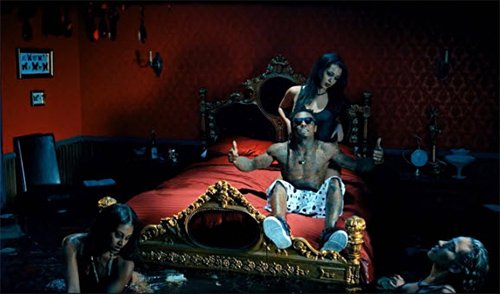 Here, Lil Wayne is in a bedroom that is full of water with women swimming in it. Aside from the fact that this water will probably cause a lot of water damage in that room, it is also a way to show that these slaves are literally “out of their element”. Also, notice the frame on the left with butterflies in it. Yes, this is all about Monarch programming.

One of Lil Wayne’s first rhymes is:

We then see a quick flash of this image:

This line is perplexing for a few reasons. Why do these “hoes” love him like Satan? Is he implying that they were loving Satan to begin with? Whether it was intentional or not, this line has profound implications in the realm of Monarch Programming, as slaves are often victims of SRA (Satanic Ritual Abuse), are made to participate in traumatic rituals (where female slaves become “brides of Satan”) and so forth. Sometimes MK handlers tell their slave they are Satan himself while they are abusing them to further trauma.

“Alters within a Monarch slave are conditioned by their servitude to believe that their life is controlled by Satan, who is
stronger than God. Where was God when they needed him?”
– Fritz Springmeier, The Illuminati Formula to Create a Mind Control Slave

Another one of Wayne’s rhymes is strangely reminiscent of the kind of dialogue a Kitten slave would have with a handler.

She say “I never wanna you make you mad,
I just wanna make you proud”
I say “baby, just make me c*m,
Then don’t make a sound”

The last part of the video is also somewhat disturbing. It begins with “kittens” entering a white room.

They then reach a bathtub full of red liquid (blood) and, for no apparent reason, make a big mess.

Once again, this scene subtly refers to an actual Monarch practice that is used to traumatize slaves and engender dissociation.

“In searching for traumas to apply to little children, the Programmers found that these natural phobias which occur in most people from birth will work “wonderful” to split the mind. Along this line, the following are samples of traumas done to program slaves:
(…)

C. Immersion into feces, urine and containers of blood. Then being made to eat these things. These are standard traumas.”
– Ibid.

While the real-life implication of this scene is horrible, everything is nevertheless portrayed in a cool and stylized matter, where the models keep doing sensual faces to the camera (in real life, these faces would be completely distorted with pain).

Like many other pop songs, Lil Wayne’s Love Me has a simple surface meaning–him not caring about haters as long as his “hoes” love him–but the music video adds a very sinister underlying meaning. Regular readers of this site understand that there’s an undeniable pattern of reoccurring symbolism in popular culture and Love Me definitely adds to it. Indeed, in this video, ALL of the symbolism that is associated with Kitten Programming (one eye, butterflies, animal prints, etc.) is represented in the video, along with various references to real life Monarch Programming practices. While each individual element could have been present in the video to symbolize something else than MK-Ultra, tell me … what are the odds that ALL of these symbols being “randomly” inserted in one, four-minute video? As is the case for other videos reviewed on this site, it is not about pointing out single instances of random symbols, but understanding each piece as a whole and the hidden realities it refers to. One these hidden realities is Monarch programming, one of the occult elite’s favorite practices, one that can be traced back to what Springmeier calls “generational satanic families”.

While rap has always had a healthy dose of macho bravado, Love Me is a deformation of this “tradition”, as it adds a sick, perverted twist to it, including allusions to violence, abuse, and even torture. As years go by, this “pushing of the envelope” becomes more apparent as the original culture around hip-hop is slowly but surely becoming “Illuminati-friendly”. Like many other movements in society, hip-hop has been co-opted by the elite to be used as a tool to indoctrinate young people. Are there still real rappers out there? Yes, tons of them. But you’ll probably never seen them on the Grammys.