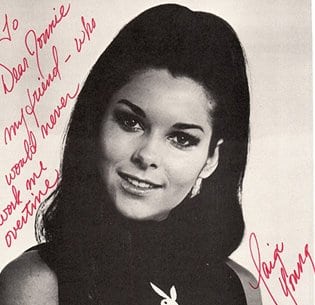 Paige Young was the November 1968 Playboy Playmate of the Month and, after years of being used by powerful Hollywood men, she shot herself in the head. She was found dead laying on an American flag, next to a pentagram laid out on the ground, in a room full of pictures on which were written “Hugh Hefner is the devil”.

The flurry of abuse allegations against Bill Cosby lead to a closer look at the long forgotten story of Paige Young, a Playboy Playmate in 1968. The woman briefly “dated” Cosby and was passed around by Hugh Hefner and “dozens of Hollywood leading men”. A recent article in the Daily Mail describes Paige Young’s life in Hollywood and the gruesome details of her suicide. Many details in that article provide clear indications that the Playmate was a Beta Kitten Monarch slave who was handled by the Hollywood elite. (If you’ve never heard of Monarch Mind Control, read this article first)

Like most Playboy models, Paige Young was young and naive when she became the Playmate of the Month in November 1968. She was soon swept up in the disgusting world of the Hollywood elite, where she became a literal sex slave. Ex-model Tamara Green Young while she was “dating” (“servicing” would be a more accurate word) Bill Cosby in 1970.

‘I was there seeing my boyfriend and Paige called me and said Bill was on tour and she was travelling with him.

‘They picked me up at my friend’s house and I remember sitting in the back of a stretched black limo with them both and Bill wanted to score some drugs.

‘I called around and found a bag of pot some place on the edge of El Paso.

‘Paige was in to her drugs and Bill wanted to get her some, she was along on the trip like his pet dog, she was a very subdued person, more like moon on the water in terms of her personality.

‘They were clearly well acquainted with each other, it didn’t seem like a new thing. As far as I know they dated for a while.

‘Paige always seemed in a stupor, a daze, like he was controlling her. All I remember is that their relationship wasn’t healthy.’

‘Paige was a young thing who was very much taken advantage of by the men of Hollywood, she was intelligent and talented, it’s a tragedy what happened to her.’

The sentence ‘Paige always seemed in a stupor, a daze, like he was controlling her’ is significant as it perfectly describes the mind state of an MK slave. 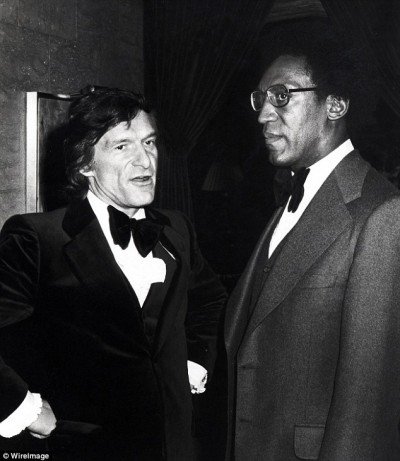 Page Young’s friend Richard Sample explains how she was passed around and manipulated by Hollywood elite.

‘She told me about all the men who had abused her. She said she had an affair with John Huston, and that he had done things to her, abused her.

‘I remember one incident in which John hid her shoes to make her think she had gone crazy. It was only a small thing but she was really bothered by it.’ (…)

In another story Paige confided in Melanie that a relative of a major celebrity had made a sex tape of her.

‘She was terrified of it coming out, in that day you knew your career was going to be over once it got round.

‘For weeks all she could think about was getting hold of that tape, she thought it was going to ruin her.’

At the age of 30, which is about the age where most MK slaves start to break down, Young was found dead in an apparent suicide. The details of her death are symptomatic of the mind state of a Monarch programming victim.

‘Paige had the whole thing planned out down to the last detail,’ she said.

‘It was Palm Sunday and she came to tell me she was going to kill herself.

‘She stayed in the back house of the duplex where we lived and I was at the bathroom window.

‘She comes up to the window and calls out to me, “I want to show you something.”

‘I was like, “What are you up to now Paige?”, I couldn’t be bothered with any more of her drama.

‘But she was like “No you’ve gotta come and see it”. So I go to her apartment and she gave me a guided tour of her suicide scene in her bedroom.’

Myers says that what she found still haunts her today.

‘It was chilling,’ she recalls. ‘There was a large American flag draped across her bed and there was a pentagram laid out on the wooden floor.’

Myers added: ‘I remember her showing me around it because it was somehow important, but I didn’t know what it meant.’

But it was the bedroom wall that shocked Myers the most.

‘It was covered floor to ceiling with photos of Hugh Hefner,’ she said.

‘There were news clippings, magazine articles, everything you could think of. Written across it was something like: “Hugh Hefner is the devil”.

‘The whole wall was a shrine saying, “I hate Hugh Hefner”, the crux of her anger was against him.

The description of Young’s suicide room contains several revealing details. First, dark occultism is a integral part of Monarch Programming which leads MK slaves to become obsessed with occult symbols. This probably explains why a pentagram, a symbol that is used in ritual magick, was laid out on the floor of her room.

MK slaves also develop an obsession with their handler/programmer whom they often end up referring to as “the devil” or “Satan”. Not only do MK handlers force their slaves to undergo horrific torture to induce trauma, they subject them to all kinds of Satanic rituals. Some accounts describe slaves being forced in to a “black wedding” with Satan himself (played by the handler) in a ritual designed to cause intense trauma.

Friends of Young believe that the elaborate setup of her suicide room was an attempt to bring mass media attention to the sick ways of the Hollywood elite. Like most MK-related deaths, mass media either ignored or spread disinformation about her life and death. All facts pointing to the dark side of Hollywood have been swept under the rug. To this day, most sources still wrongly state that Young died of an “overdose” – the usual official cause of MK-related deaths – despite the fact that police reports clearly state that her death was due to a gunshot to the head.

“Memorial site findagrave.com wrongly claims that she passed away from an overdose of sleeping tablets, as does the site whosaliveandwhosdead.com.

And website allstarpics.net, which features several glamour shots of the brunette, incorrectly claims she committed ‘suicide by barbiturate overdose’.”
– Ibid.

One can even wonder if she was actually “suicided” by those who controlled her, as she was increasingly talking about “leaving it all” – a sign of her programming wearing off. Whatever the case may be, the life and death of Paige Young provide yet another glimpse at the dark side of Hollywood – one that is filled with powerful sadistic men and helpless slaves who suffer for years until they disappear … forever.
FacebookTwitterSubscribe
P.S. If you appreciated this article, please consider making a donation. Thank you for your support!