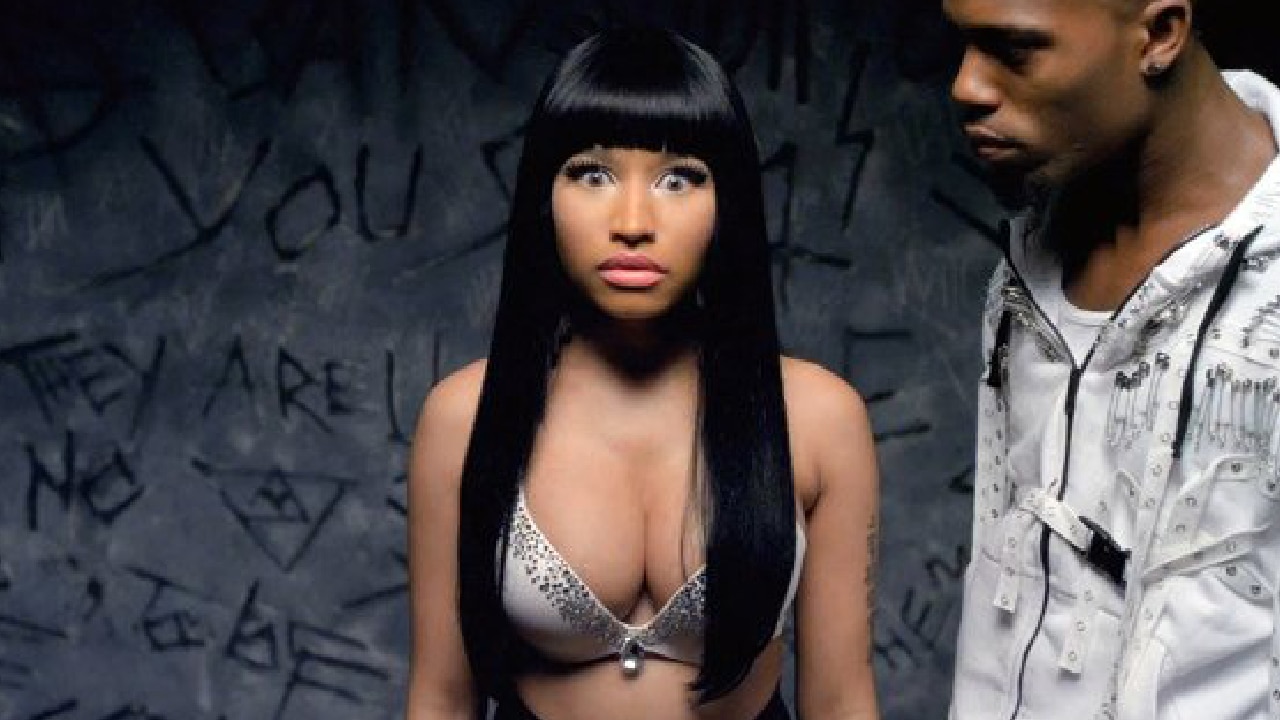 “Out of My Mind” is considered to be an upbeat and funny song about B.O.B. being completely crazy. A closer look at the song’s lyrics and video, however, reveal that it is yet another attempt to glamorize one of the elite’s most despicable practices: Mind Control Programming. We’ll look at B.O.B. and Nicki Minaj’s “Out of My Mind” and how it refers to Monarch Mind Control.

B.O.B.’s Out of My Mind is about him being a crazy so, fittingly enough, the video takes place in a mental institution. While most would stop their analysis there, a closer look at the song and video reveal that B.O.B. is getting a specific type of “treatment”. Some people are “out of their minds” due to mental health problems, but others are there by force. Those that have mental health problems usually get treated by competent people while those who “lost it” by force get treated extremely badly. They are violently abused and traumatized by sadistic handlers until they completely dissociate from reality – literally going “out of their minds”. This is what we call ritual abuse, the basis of Monarch Mind Control (for more information read the article Origins and Techniques of Monarch Mind Control). Out of My Mind is a cartoonish, yet blatant, description of the process of Mind Control.

As we’ve seen in previous articles on Vigilant Citizen, making Monarch programming cool, fashionable and, ultimately, acceptable is an important part of the elite’s Agenda. On a regular basis, we see popular artists releasing material that is rife with Mind Control and Illuminati symbolism, in order to keep the elite’s Agenda fresh and new  – making sure it stays on TV, radio and getting plenty of hits on YouTube. Performed by two of rap’s hottest artists, Out of My Mind gives Mind Control imagery yet another go at the airwaves. Despite its disturbing nature, the video is presented in a lighthearted, sexy way, which comes across as positive and attractive to young viewers. Let’s look at the video’s main scenes.

B.O.B. is Not Receiving Proper Treatment

The video begins with B.O.B. and Nicki Minaj locked inside a cell and acting all crazy. On the wall behind them are carvings that appear to be made by someone that is crazy and paranoid, but, on closer look, one can decipher words and symbols directly referring to Illuminati mind control. There are several All-Seeing Eyes, a symbol that not only represents the occult elite but is central in actual mind control programming. This ancient occult symbol is at the center of systems used to program MK slaves and was even used by the father of mind control, Josef Mengele.

“The All-Seeing Eye is placed in the center of Star’s systems, just like Mengele would put in an All-Seeing Eye.”
–  Fritz Springmeier, The Illuminati Formula to Create a Mind Control Slave 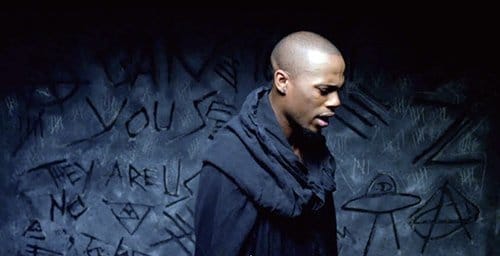 Behind B.O.B. are weird carvings such as the All-Seeing Eye inside a spaceship. There are also unsettling phrases such as “They are us” and “We are them”. Who are “They”? Is this a reference to the elite controlling these artists and making them their pawns? Hence …”We are them”?

Not only does the All-Seeing Eye represent the occult elite, it also represents constant surveillance and monitoring, that there is no escaping the handler’s grasp. For this reason, many MK slaves become obsessed with the symbol and find themselves drawing it everywhere.

“Because the slave is monitored from so many different unseen methods, it does begin to seem hopeless to some to ever be free of Big Brother. If you add to all this, that the slave has been programmed repeatedly that there is no escaping their All-seeing eyes, then it is easy to see why so many slaves acquiesce & just comply.”
– Fritz Springmeier, Deeper Insights into the Illuminati Formula

At the bottom left, we see a carving saying “They see” with a creepy eye in between. Who are “They”? Maybe the symbol right next to it bears the answer: An eye inside a triangle, a symbol of the Illuminati.

While B.O.B. is jumping around in his cell, some unfriendly looking fellows, who do not appear to be caregivers, march toward his cell. At the center of them, an evil-looking, Josef Mengele-type appears ready to program the rapper.

Looking like a sadistic mad scientist, the man in the middle brings B.O.B. a straitjacket. He is accompanied by four agents dressed in riot gear.

At this point, it should be clear that B.O.B. is not at a typical mental health institution. He is at a programming site, run by high level “scientists” and heavily armed governmental agents. As seen in previous articles, normalizing police state agents is also part of the Agenda.

B.O.B. is taken by force somewhere to probably be abused and tortured by the creepy scientist who is coldly looking over in the back.

Of course, the video sugarcoats the dark reality behind it, by making every appear fun! and sexy! Therefore, the tools used to torture B.O.B. are brought in by nurses in outfits that are .. .non-regulatory.

While Monarch programming is atrociously cruel, videos like this one make the concept trivial and even unconsciously positive to young, unaware viewers.

B.O.B.’s lyrics in the first verse refer to him being evaluated by “they” and even names classic mind control techniques. Here’s part of it:

“My brain is on vacation, they telling me
And I’m bi-polar to the severity
And I need medication, apparently
And some electrocompulsive therapy”

The main goal of mind control is to traumatize victims severely enough to cause them to completely dissociate from reality. Once this is accomplished, handlers can program new alter personas into the blank slate that their brain has become. While dissociated, MK slaves are literally “out of their minds”. In B.O.B.’s verse, the phrase “My brain is on vacation, they telling me” aptly describes an MK slave that has dissociated from reality. The lines “And I need medication, apparently/ And some electrocompulsive therapy” refer to two important techniques of Mind Control: The usage of drugs (“medication”) and electroshock torture.

“Another basic component of the Monarch program is lots of electroshock. Stun guns, staffs with hidden electric cattle prods, and cattle prods are frequently used on the slaves. Electroshock is used to create the dissociation from trauma during the programming, and later it is used to remove memories after the slave has carried out a mission, or to instill fear and obedience in a reluctant slave. Slaves generally carry horrible body memories of excruciating electro-shock tortures to their entire bodies. As the slaves begin a therapeutic deprogramming process they will recover these horrible memories, not to mention many other painful memories.”
– Ibid.

As if to emphasize the importance of this technique in the song, we hear an electroshock sound effect during B.O.B’s verse – a sound that probably terrifies actual MK victims.

The next part of the video is B.O.B.’s “Psych Evaluation”, performed by “Dr.” Minaj. We soon realize that she is not there to hear about B.O.B’s feelings, but rather to practice a technique that is extensively employed by mind control handlers: To humiliate, insult and demean victims to further their trauma. Minaj proceeds to diss the hell out of B.O.B. and his career, making the rapper come close to tears. In this excerpt, she ridicules one of B.O.B’s hits:

“Now can we pretend them airplanes in the night skies
Are like shooting stars?
Well, you gon’ really need a wish right now
When my goons come through and start shooting stars”

Of course, in actual programming, handlers are a lot more cruel, sadistic and hurtful but the basic concept is nevertheless present.

Minaj then goes into stripper mode and hints to the fact that she might be under mind control herself.

It has been reported that MK handlers are often under mind control themselves and this scene appears to describe this fact.

Towards the end of her verse, Minaj says:

It is rather odd to refer to these “crazy Illuminati rumors” while playing the role of an MK slave/handler in a video promoting Monarch mind control. Also, nobody with even a little knowledge believes that Nicki is “part of the Illuminati”. Rather, she is one of the several pawns used by the industry to promote an Agenda … and she will probably be dropped as soon as her “cool factor” is gone, like hundreds of other pop stars before her.

In what appears to be a moment of lucidity, Minaj offers to free B.O.B. from his shackles. Her handler alter however appears to kick back in and she leaves the room somewhat confused and embarrassed.

After his weird encounter with Dr. Minaj, B.O.B. is taken to the parole board.

B.O.B. enters the room pushed by an over-armed police guy and with his head covered so he doesn’t know where he is. I’m pretty sure they don’t do that in a regular mental institution. However, keeping victims confused and in the dark is a common tactic used Monarch programming.

While B.O.B. raps before the parole board, one of the judges gets all hot for B.O.B., asking him to call her. Yes kids, being an MK slave is very attractive.

At first glance, Out of My Mind appears to be a fun song about being wild and crazy, but a closer look at the lyrics and the video reveals that it actually refers to extremely specific aspects of Monarch Mind Control. Once this fact is known, the song suddenly stops being fun and turns into a disturbing case of normalizing and glamorizing of the cruel practice that is Mind Control. We see and hear references to trauma, dissociation, being drugged, electrocuted, roughed up by government agents and even manipulated by handlers. While all of this sounds horrible written out, catchy rhymes and sexy nurses make the pill easy to swallow for young viewers who will probably jump around screaming “I’m out of my f*cking mind!”.

In the end, Out of My Mind is yet another example of the elite’s Agenda being marketed to young music fans. Mind control is heavily used by the elite to keep a stronghold on various areas of power, particularly the entertainment industry. While not all pop artists are victims of Mind Control, most have signed contracts that make them pawns of the occult elite and force them to give up control of their creative creations. While rappers used to be about “fighting the power” and “representing the streets”, they are now seen in cells, confused, and abused by cops and mad scientists, talking about being electroshocked. The music industry has been hijacked, folks … and while videos like this may make it obvious to some, most will just laugh and say “You’re out of your mind”.