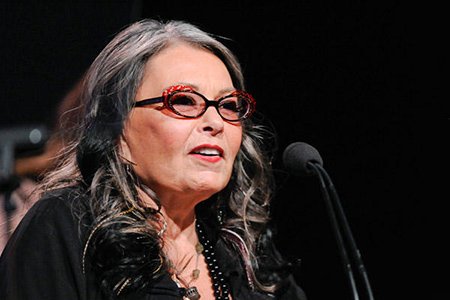 Roseanne Barr is an outspoken actress and comedienne who never shied away from tackling difficult and controversial issues, even if that meant being unpopular or being tagged as “crazy” by mass media. While I can’t say that I agree with all of her views, she remains  one of the very few people in Hollywood who dare talking about its most damning issue: MK ULTRA.

Roseanne basically says that Hollywood stars are terrified of using their status to speak out about important issues because there’s a “culture of fear” going on there, where “speaking out” almost automatically equals being shunned from the industry and having one’s career destroyed.

This means that many stars do not speak out because they literally cannot do so. They are mind controlled which means that they have alter personas programmed into them that handler are able to trigger and control at will. (For more information on the subject read the article entitled Origins and Techniques of Monarch Mind Control).

Roseanne Talking About Mind Control in the Past

The above television interview is not the only instance where Roseanne managed to slip mentions of MK Ultra in mass media. During a CNN interview with Larry King which aired on August 16, 2001, Roseanne talks about trauma-based mind control and MK ULTRA (I placed important parts in bold).

KING: All right, some see what you have or had as a serious psychological disorder.

KING: Others as psychological fad. Also…

ROSEANNE: Well, I have this head shrinker and he says it’s deliberately induced because the CIA is where they started inducing it when after they brought all the Nazis over from Germany to run American Psychiatric Association.

KING: What are you about?

ROSEANNE: I’m telling you the truth. It is all mind control and all kinds of things to invent people with multiple personalities.

KING: So you have been captured by Nazis?

ROSEANNE: The government. Well in a way, I believe the government has implanted some kind of a chip into my head where…

ROSEANNE: You know, is monitored by Barbara Walters and these other women. And they take all my ideas and I’m, you know.

KING: Yes, is Oprah one of the people monitoring?

ROSEANNE: Definitely. I think she sits with her finger on the switch to the chip.

KING: Let me read something to you, that you wrote in “Esquire.” And I want…

KING: …your reaction it. This is your writing.

ROSEANNE: That is true that shrinks have been my dearest friends.

KING: You never get mad to say God has done me a dirty deal here when my multiple personalities take over?

ROSEANNE: No, because I feel like God — honestly I feel God gives you multiple personality disorder when there’s too much stress in your life to handle it any other way. I think it is a gift to children.

KING: So another thing can take over?

KING: Another person deal with this?

ROSEANNE: Yes. I mean, you know, you’re not the one that’s insane. It’s the place you are in. So you have to adapt to it.

In that interview, Roseanne claimed that she suffered intense trauma in her childhood, which lead to her having multiple personalities and being manipulated by CIA-lead psychiatric experiments (MK ULTRA).

Roseanne also uses her blog to discuss MK ULTRA in Hollywood. In a 2009 post, she even stated that Joe Jackson (Michael Jackson’s father) was a CIA MK ULTRA operative.

who’s abuse of his own children was used to profit the CIA’s programs that follow and study the effects of child abuse on the young, and how their minds can be controlled to such an extent, and with such abuse, that they can be forced to develop talent. jesus said ‘the truth will confound you in that day’.
joe jackson is a child abuser, and catherine looked the other way while he beat their kids and tortured michael mentally. keep them both away from michael’s kids.
– Source: Roseanne World

In the wake of the Newtown tragedy, Roseanne posted an article written by her friend John Philips who went deep into the issues of psychological warfare on the American public, mind control, its connection to powerful occultists and organizations such as the Church of Satan and the Temple of Set and the importance of mass media to indoctrinate the masses. Here are important parts of the article.

Mind War and the Tragedy in Newtown by John Phillips

“In 1980 as Ronald Reagan ushered in the era of greed is good, Major Michael Aquino wrote under the direction of Paul Valley, Army commander of the 7th Psychological Operation Group in San Francisco, a paper called “From PSYOP to Mind War:  The Psychology of Victory”.  Michael Aquino proposes that the concepts of Psychological Operation (PSYOP) are outdated, and that we need a new way to explain how the military can use psychological warfare to achieve their goals.  Aquino states:

“So let us begin with the simple name change.  We shall rid ourselves of the self-conscious, almost “embarrassed” concept of “psychological operations”.  In its place we shall create MindWar.  The term is harsh and fear inspiring, so it should be:  It is a term of attack and victory- not one of the rationalizations and coaxing and conciliation.  The enemy may be offended by it:  that is quite right as long as he is defeated by it.  A definition is offered: MindWar is the deliberate, aggressive convincing of all participants in a war that we will win that war.”

In 1976 during the Church Committee Congressional investigation into abuses within the military and intelligence community, the public discovered that a CIA project originally called Bluebird sought to learn how to control both individual behavior and to influence culture as a whole.  The creation of a Manchurian Candidate whose behavior could be controlled was the ultimate goal of this research.  Scientists associated with the project have admitted that they succeeded in their goals by the mid 1950’s.  All government agencies were ordered to stop research on individuals who had sometimes become unwitting victims, in a research program the violated all the provisions for human research laid out at the Nuremburg Trials.

CIA Director William Colby had ordered the destruction of many of the documents related to this research, and unfortunately the Church Committee really only got a small glimpse of the program that victimized 1000’s of individuals under the cover of “scientific research.”

More importantly the Church Committee failed, because it chose not to reveal to the public any information concerning the CIA agencies attempt to influence “American Culture.”  To control the public discourse the CIA felt it needed to control and manipulate culture so they could accomplish their goals.

While all the agencies involved in violating the Nuremburg Treaty told the Congressional Committee that all research in this area had been stopped, there is irrefutable evidence that both the program to control individuals behavior and culture at large have continued.  At the heart of this research lays the Devil, and until we as a society decide to seize the power of communication away from the Devil, these tragedies will not only continue but intensify.   How did individual behavior change in desperate young adults?  Because their education taught them that mass killing was OK, justifiable, a good way out of distress.  The MindWar was alive and well, the military was succeeding in their objectives.

As the “New Age” movement sprang into popular culture in California in the early 1960’s, Crowley’s work was promoted by Anton LeVey who was the founder of the “Church of Satan” in 1966.  Michael Aquino, the author of MindWar, was an active disciple of the Church of Satan and later went on to found his own cult called “The Temple of Set.”

If you want to know if MindWar is still alive and well, at the recent MTV music awards the MC encouraged all those in the audience to give and the sign of the devil and worship Satan to which he got an enthusiast response.  If Norbert Weiner were alive today, he would surely tell us that society was losing its battle with the Manichean Devil.

It is time for us to closely examine how we educate our children, and the role that the abundance of information available to our youth through the corporately controlled media has on their perceptions of reality.  One does not have to look too closely at American Culture to realize that our children have been robbed of their childhoods, by a media machine that insists on putting profits before children.  While controlling the number of guns on our streets may have a minimal impact on the safety of our children, until we address the impact of the military industrial complex on the minds and soul of our children, we will live in a country that worships the Manichean Devil.

Many believe that eliminating prayer in our public schools has led to the moral corruption of our youth, without first asking how the United States Army division of Psychological Warfare became actively involved in promoting Satan Worship among our youth?  You reap what you sewn, when you condition a certain subset of children to worship the devil, train them in the video arcade to kill without remorse, and then drug them because they have abnormal behavior, you set the stage for National Tragedy.”

Katt Williams: “We Are Against the Illuminati at Our Own Detriment”