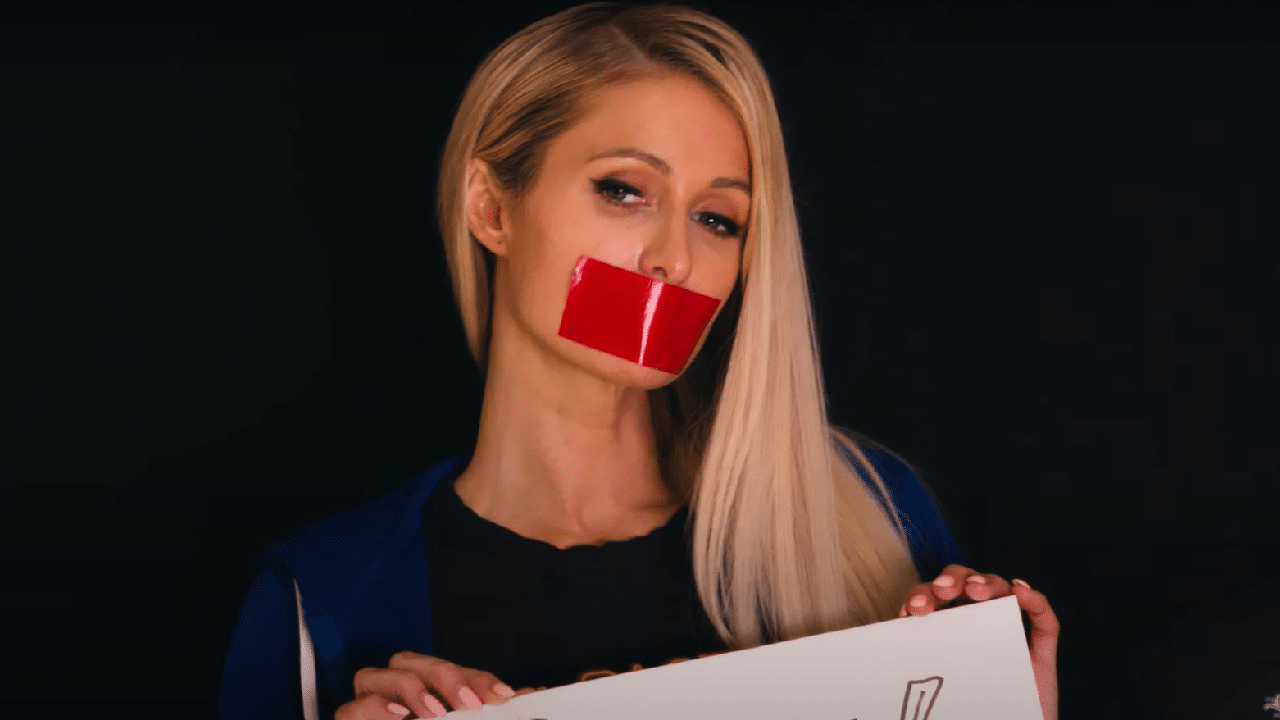 If one recalls the early 2000s, you might remember douchebags wearing Ed Hardy trucker hats and everyone being obsessed with Paris Hilton. Mostly known for wearing sunglasses, and saying “That’s hot”, Paris was the original “why is she famous?” celebrity. The reality TV show The Simple Life crystalized her “spoiled dumb blond” persona as the entire series revolved around her being clueless and expressing that cluelessness with a high-pitched baby voice.

Well, according to the new documentary This Is Paris, this was all an act. Furthermore, it asserts that Paris is actually a brilliant businesswoman who created a hugely lucrative brand by fully utilizing the power of social media. The documentary repeats several times that Paris is the original influencer … which is probably true.

While This is Paris spends a lot of time documenting a glamorous life filled with fancy traveling and fancier clothing, it also reveals some darker chapters in Paris’ life. For instance: Her parents paid to have her “kidnapped” and sent to a boarding school where students were abused, drugged, and tortured on a daily basis.

Why would the “heiress of the Hilton hotels empire” be willingly sent to such an awful place by her parents? The reasoning is pretty strange. In fact, the entire documentary is filmed in a strange, manipulative way. Indeed, while This is Paris contains elements found in standard documentaries such as interviews and archive footage, most of it is filmed in typical reality TV fashion (i.e. Keeping Up With the Kardashians). And, at the risk of bursting your bubble, most reality TV is scripted. Thus, one cannot help but feel that there’s some “rehearsed fakeness” going on there.

Whether willingly or not, the documentary actually reveals that Paris is still under the control of powerful industry handlers. Here’s a look at This is Paris.

The documentary starts with Paris traveling to exotic places while saying “Yaass!” to things she likes. Then, things take a darker turn. Paris says:

“Something happened to my childhood that I never talked about with anyone. I experienced it and, to this day, I’m still traumatized”.

According to the documentary, teenage Paris liked to sneak out of the house and party too much. In an attempt to correct that flaw, her parents sent her to an outdoor wilderness program for “teenage boys and girls needing a change in attitude and direction”. It didn’t go too well for her.

After a failed attempt to run away from the camp, Paris got smacked in the face in front of everyone else to set an example. Not Yaass. Not Yaass at all.

At the age of 17, her parents arranged for two to “kidnap” her and take her to a boarding school.

The documentary’s recreation of this sickening family moment.

Paris was sent to Provo Canyon School in Utah, an establishment with a long history of abuse allegations. The school still exists today and its official website actually addresses the negative media attention it has been receiving.

A notice on the official website of Provo Canyon School.

Paris Hilton’s description of her experience at this school indicates that it uses MKULTRA-style abuse and torture:

“You’re sitting on a chair staring at the wall all day long getting yelled at or hit”.

“I felt like a lot of the people who worked there got off on torturing children and seeing them naked”.

“They would prescribe everyone all these pills. I didn’t know what they were giving me. I would just feel so tired and numb. Some people in that place were just gone. Like, the lights are on but there’s no one home”.

“Solitary confinement was like something out of One Flew Over the Cuckoo’s Nest. They’d make people take their clothes off and go in there, like, for 20 hours. Someone was in the other room with a straitjacket screaming. I was freezing, I was starving, I was alone and I was scared”.

As explained in the article Origins and Techniques of Monarch Mind Control, all of the “treatments” described above are staples in MKULTRA. The abuse, the drugs, and the torture are designed to “break” the victim and to cause dissociation.

Is Provo Canyon School an actual MK programming site? Or does it use a “light” version of it to “reprogram” its troubled students? Unclear.

At one point Paris says:

“It made me not trust anyone, not even my own family”.

Despite saying that, the documentary shows that her family and some powerful outside people are still controlling her life.

While the documentary presents Paris as a survivor who attained freedom through success, it also shows that she is surrounded by people who appear to be extremely controlling.

First, there’s her mother Kathy Hilton. She was a child actor who grew up in showbusiness. At one point, Paris says “My mother treats me like I’m 12.” which says a lot about her relationship with her family.

Although Kathy arranged for Paris to get kidnapped and sent to Provo Canyon school, she apparently only learned about the abuse that was happening there while filming the documentary.

Kathy Hilton’s reaction after being told that Paris was abused at that school.

How can a wealthy and well-connected family such as the Hiltons not know about the things that were happening at that school prior to sending one of their daughters?

I said ONE of their daughters because the other one didn’t go there: Nicky Hilton Rothschild.

Nicky Hilton Rothschild explaining how she’s tough with Paris because everyone else is a yesman.

Contrarily to Paris who complains about constantly ending up with boyfriends who are intimidated by her wealth, Nicky found a way to be the “poor girl” in her marriage. Indeed, while the Hilton’s family fortune is estimated at $900 million, her husband’s family wealth is estimated at … take a deep breath … $700 trillion.

Throughout the documentary, Nicky appears to be rather harsh and judgemental towards her sister. When Paris asks Nicky why she was not sent to the boarding school, she replies: “You were very naughty” with little to no compassion. In short, it is almost as if Nicky was always “protected” by her parents while Paris was the “chosen one” to become an industry pawn.

Beyond her family, there are some powerful industry people hovering around Paris. For instance, “media strategist” Sheeraz Hasan is seen micromanaging Paris’ events during the documentary.

Sheeraz Hasan talking about how he built an entire paparazzi business “on Paris Hilton’s back”.

“In 2010, Sheeraz founded his own social media, marketing and amplification firm, Sheeraz Inc. He has overseen campaigns for some of the most famous celebrities in the world including Kim Kardashian, Jennifer Lopez. Justin Bieber, Selena Gomez, Zendaya, Priyanka Chopra, Paris Hilton and the Jackson family, as well as internationally recognized brands including Procter & Gamble, Unilever, AB InBev, Johnson & Johnson, Pantene and Gillette, generating over $2bn in earned media. His experience spans the globe as he has worked with government agencies and entrepreneurs in Europe, the Middle East, India and Asia.”

Hasan appears to specialize in industry slaves such as Kim Kardashian, Kylie Jenner, Justin Beiber, Selena Gomez, Lindsay Lohan, and, of course, Paris Hilton. During the documentary, we see Hasan filming Paris with his phone while calling her the “boss b*tch”. However, a little later, we see him telling Paris to go to bed in a bossy and authoritative manner.

Hasan symbolically towers over Paris as he tells her to go to bed. He repeats: “Hair and glam at 8. Ready at 8”. Then he leaves with an annoyed look.

Who’s really the boss b*tch in this scenario?

Then, there’s this other boss b*tch that’s been hovering around Paris since forever.

Paris with Kris Jenner, head of the Kardashian coven.

There several links between Paris Hilton and the Kardashians. First, they both use the services of the aforementioned Sheeraz Hasan. Second, Kim Kardashian started her career as a Paris’ assistant.

Paris with her assistant Kim Kardashian in the early 2000s.

Third, both of Paris and Kim attained new levels of fame (and infamy) with “leaked” sex tapes. As explained in the article Kanye West Exposes Dark Truths About Kardashians, Tries to Break Away From Them, Kris Jenner is said to have organized the whole Kim Kardashian tape stunt. Were the forces involved in Paris’ tape? In the documentary, Paris says:

“It was a private moment of a teenage girl not in her right headspace. And everyone was watching it and laughing. It was like being electronically raped”.

Was this forced humiliation part of her “initiation” in the industry?

While This is Paris reveals some interesting facts about Paris Hilton, it doesn’t take long before realizing that there’s something off about this documentary. Its whole scripted-reality-TV vibe indicates that its narrative was carefully shaped to serve specific purposes. A cynical mind would argue that the “documentary” was actually an attempt to rebrand Paris, to add depth to her character, and, perhaps, make her somewhat relevant again. An even more cynical mind would argue that Paris’ handlers framed the documentary’s narrative to reveal the abuse in her past while removing all blame from said handlers.

While the documentary presents Paris as a successful woman who liberated herself from her past, the shady characters that still revolve around her indicate that she’s probably more controlled than ever. And that’s not hot at all.

FacebookTwitterSubscribe
Related Topics:featuredhollywoodkardashiansparis hilton
Up Next

How the Series “Utopia” Eerily Predicted 2020