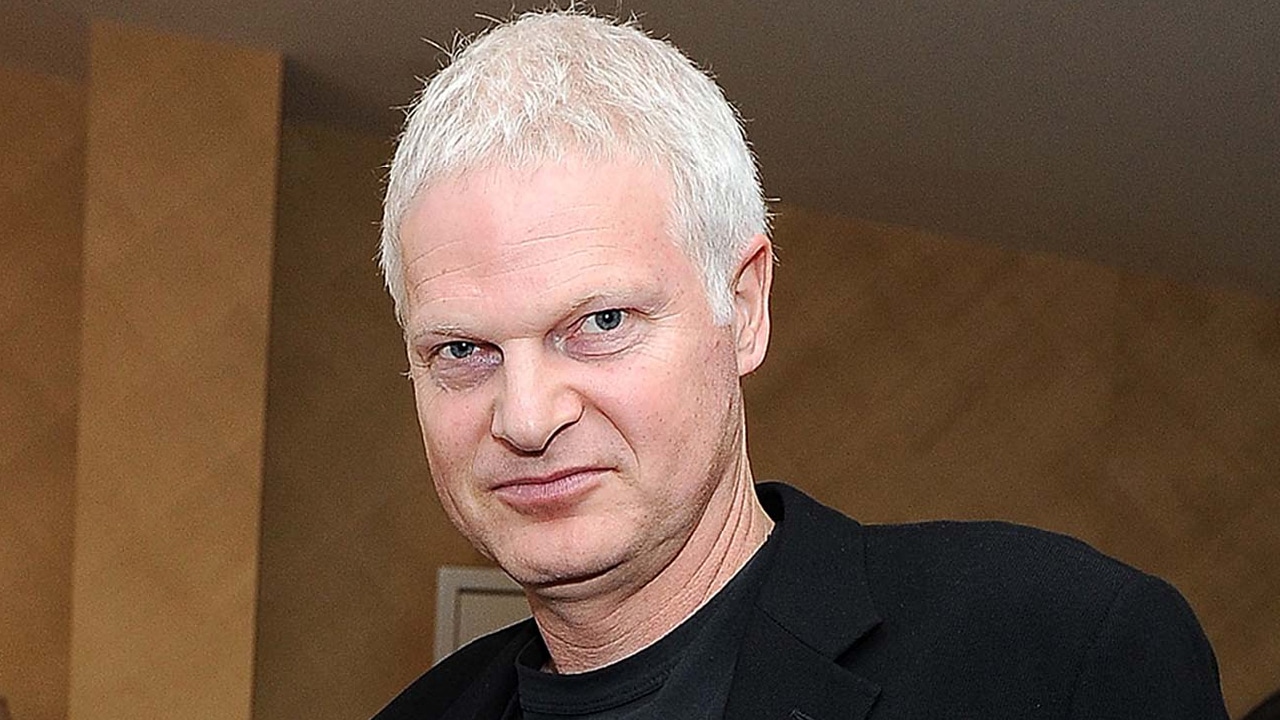 Steve Bing was mostly known for creating Shangri-La Entertainment, the production company behind several Hollywood movies including Kangourou Jack and The Polar Express starring Tom Hanks. Bing was also known for being a high-rolling financier who was close with several elite figures including Bill Clinton and Jeffrey Epstein.

In a 2019 Vanity Fair article about Jeffrey Epstein, Steve Bing was mentioned as being part of his “Lolita Express circle”.

“They were always the most beautiful girls in the room, usually models or former models, with a slightly aloof Stepford Wives aura that masked a deeper vulnerability. Several names came up when they were around: Epstein, supermarket magnate Ron Burkle, film financier Steve Bing, and former president Bill Clinton, then in the prime of his postpresidential career and flying around on Epstein’s jet, dubbed the Lolita Express, or Burkle’s jet, dubbed Air F—- One.” 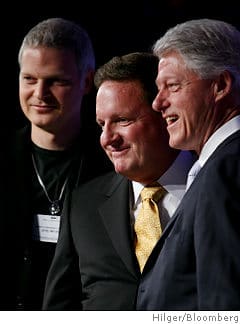 Steve Bing, Ron Burkle, and Bill Clinton – all three were mentioned in the quote above.

On June 22nd, nearly a year after Epstein’s “suicide”, Steve Bing plunged to his death by falling off the 27th floor of his Los Angeles apartment building. 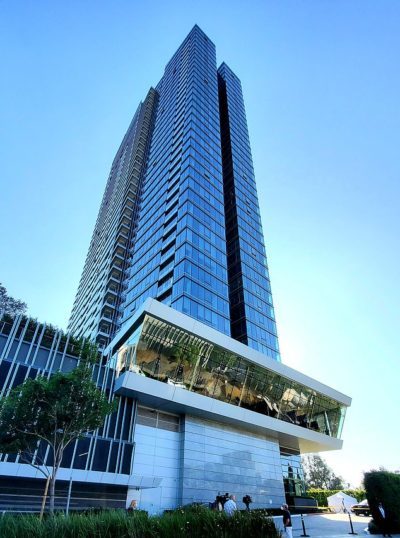 Although no suicide note found, Bing’s death was quickly ruled as a suicide by law enforcement. The reported reason for the suicide: He was depressed about the lack of human contact during the quarantine.

In other words, this exceedingly rich man, who has bought “human contact” his entire life, killed himself right as COVID lockdown measures are loosening. The circumstances behind this death are as bizarre and illogical as those surrounding Epstein’s “suicide”.

Is it possible that Steve Bing was killed by being pushed off a building, Russian Mafia-style? Did he know too much? Was he at risk of squealing on his elite buddies? Here’s a quick look at this rarified environment. 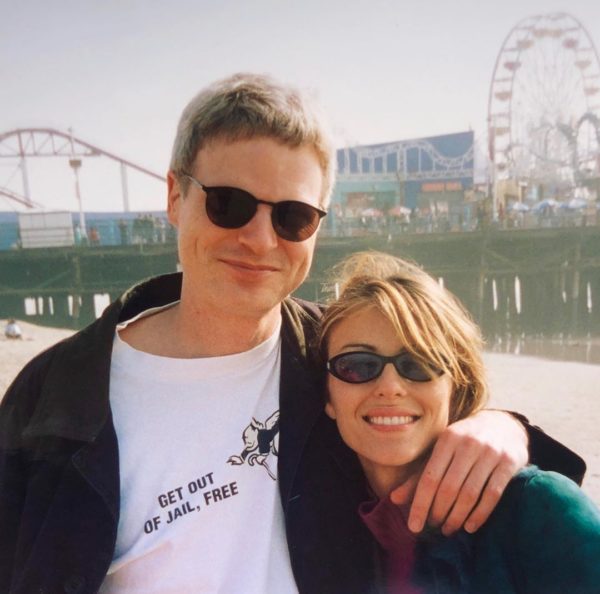 Bing’s ex-girlfriend actress Liz Hurley posted this pic on Instagram in the wake of his death. He’s wearing a t-shirt that applies rather perfectly to the occult elite.

At age 18, Steve Bing inherited an estimated $600 million from his grandfather Leo S. Bing – a real estate developer who made his fortune in New York in the 1920s. After inheriting his fortune, Bing dropped out of Stanford University in his junior year to pursue a career in Hollywood.

While his success in Hollywood was rather limited, Bing was very successful at womanizing with girlfriends such as Naomi Campbell, Uma Thurman, Sharon Stone, Farrah Fawcett, and a variety of playmates. 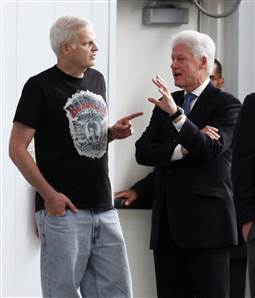 In 2008, the Clinton Foundation released a full list of donors and Bing was near the very top of that list.

Donations to the Clinton Foundation between $10-$25 million. Bing is third, under the Bill and Melinda Gates Foundation.

In a 2008 article titled Bill Clinton and the Billionaire Boys’ Club, the now-defunct website Gawker depicts Bing in a rather unpleasant light. The introduction of the article says:

As we learned in Vanity Fair yesterday, Bill Clinton has spent his post-presidential life gallivanting about the world with a small cadre of scummy billionaires. All aging boomers, all sadly unwilling to mature, all addicted to women a third their age. Who are they? What do they want from us? (Hint: if you are a girl aged 14-22, they want you.) Let’s meet the whole crew! They are just like Entourage except gross old billionaires.

The section about Bing says:

Steve Bing
Relation to Bill Clinton: Bing is a big donor to the Democratic party. Also, he has a private jet that Bill likes to ride on!
Sexual Misadventures: Well. There was a paternity fight with Elizabeth Hurley. And another with the ex-wife of billionaire Kirk Kerkorian.
Net Worth: Around $1 billion.
Youngest known special friend: Unknown! 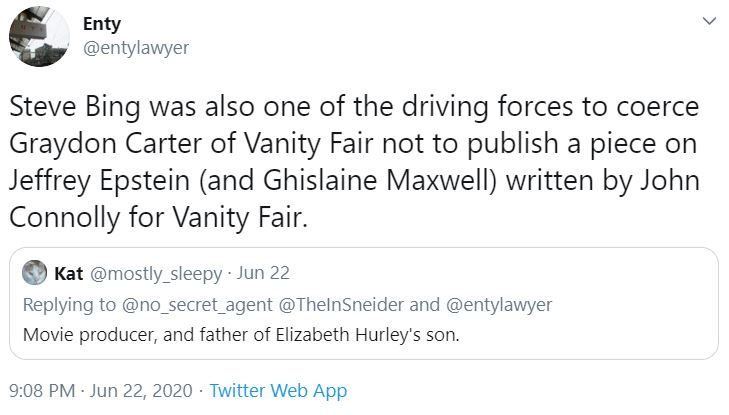 A tweet from entertainment lawyer “Enty” (he knows what’s up) about Bing preventing the release of a story about Jeffrey Epstein and Ghislaine Maxwell.

The least one can say is that Bing was connected with some powerful people who happen to be connected with elite child abuse rings. Other than Epstein himself, Bing was probably one of the most high-profile culprits remaining at large.