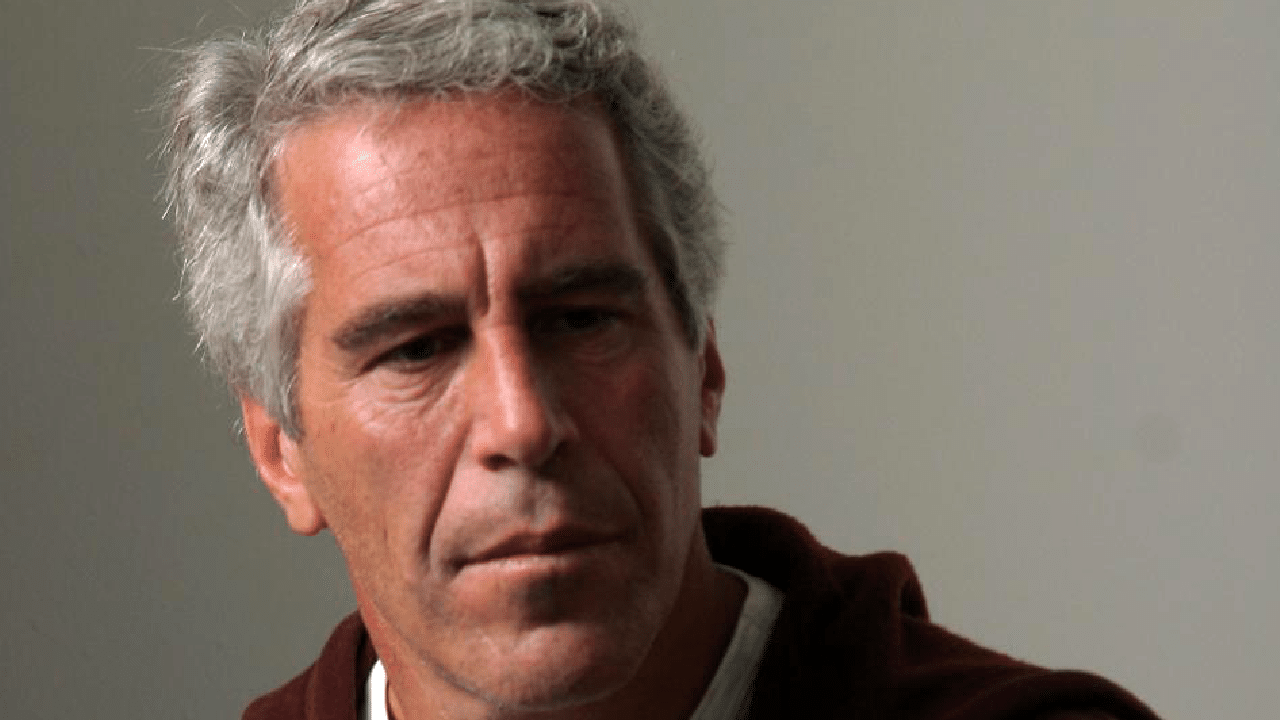 In my last article about Jeffrey Epstein, I laid out some facts explaining how he might get murdered sooner than later. Well, ten days later, the billionaire financier whose trial could have exposed the ugliest truths of the world elite, was found dead in “apparent suicide”. According to news sources, his body was found hanging in his jail cell on August 10th at 7:30 am at the Metropolitan Correctional Center in New York. He was transported from his cell to a hospital in Lower Manhattan where he was found in cardiac arrest.

While mass media immediately pushed the suicide thesis, it simply does not make sense.

Epstein Was in the Strictest Prison in the U.S. 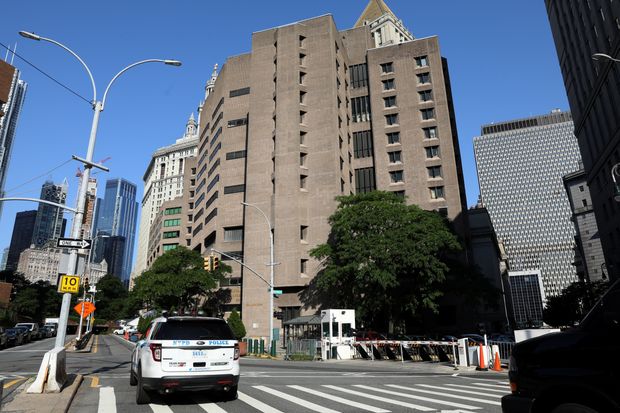 Epstein was detained at the Metropolitan Correction Center in Manhattan which is considered to be the “strictest prison in the United States”. Inside the walls of this prison, fluorescent lights are never switched off and inmates experience almost no human interaction. Furthermore, Epstein was kept in the most secure area of that prison. Inmates are kept in their cells for 23 hours each day and CCTV cameras watch them as they shower, go to the bathroom and sit alone in their heavily barricaded cells. Furthermore, Epstein was an extremely high-profile inmate.

In short, every single condition was met for him to be closely watched, all the time, by a team of people trained to monitor inmates and promptly respond in case of crisis.

Considering these facts, how there is no way Epstein could have single-handedly hang himself and die without triggering a major security alert. But that’s not all.

Epstein Was on Suicide Watch

Two weeks ago, Epstein was discovered semi-conscious, lying in a fetal position with marks on his neck. Despite the constant surveillance of inmates in his prison area, authorities never confirmed what actually happened. However, we do know that the event led to Epstein being placed on suicide watch.

Epstein, 66, was found semiconscious with marks on his neck in his cell at the Metropolitan Correctional Center in Manhattan some time in the last two days, the sources said. Epstein is on suicide watch, two sources said.

While the two sources said that Epstein may have tried to hang himself, a third source cautioned that the injuries weren’t serious, questioning whether Epstein might have staged an attack or a suicide attempt to get a transfer to another facility.

Another source said that an assault hadn’t been ruled out and that another inmate in Epstein’s unit, identified by sources as Nicholas Tartaglione, had been questioned. Sources also said Epstein and Tartaglione were cell mates.
– NBC News, Jeffrey Epstein found injured with marks on his neck in New York jail cell, sources say

In a maximum level security prison such as the Metropolitan Correction Center (which is also known as the “Guantanamo of New York”), you better believe that suicide watch is no joke. Here’s what this process usually entails:

Suicide watch is an intensive monitoring process used to ensure that a person cannot attempt suicide. Usually the term is used in reference to inmates or patients in a prison, hospital, psychiatric hospital, or military base. People are placed on suicide watch when it is believed that they exhibit warning signs indicating that they may be at risk of committing bodily harm or fatal self injury.

People under suicide watch are put into an environment where it would be difficult for them to hurt themselves. In many cases, any dangerous items will be removed from the area, such as sharp objects and some furniture, or they may be placed in a special padded cell, which has nothing outcropping from the walls (e.g., a clothes hook or door closing bracket) to provide a place for a ligature to be attached, and with only a drain-grill on the floor. They may be stripped of anything with which they might hurt themselves or use as a noose, including shoelaces, belts, neckties, bras, shoes, socks, suspenders and bed sheets. In extreme cases the inmate may be undressed entirely.

In even more extreme cases, inmates may be placed in “therapeutic restraints”, a four- or five-point restraint system. The inmate is placed on their back on a mattress. Their arms and legs are tied down and a belt is placed across the chest. In a five-point system the head is also restrained. An inmate is allowed a range of movement every 2 hours, when one limb is released and they are allowed to move it for a short period. They are then restrained again, proceeding to the next limb. This process is repeated until all areas restrained have been moved. This process usually continues in 8-hour shifts, and the inmate has a face-to-face encounter with a mental health professional at least once in each 8-hour interval. This cannot continue for more than 16 consecutive hours. The inmate is continually watched by staff during this time.

In the most extreme cases of self-harm, only when all other avenues have not worked or are impracticable, “chemical restraint” drugs may be used to sedate the inmate. In order for a facility to administer a chemical restraint, it must have the approval/recommendation of a licensed mental health professional, the facility warden, and a court order.
– Suicide Watch, Wikipedia

To sum up the situation, Epstein was inside the most secure prison in the U.S. and he was an extremely high-profile inmate. He was in the most secure area of that prison and he was also on suicide watch. There is absolutely no way he could have died by hanging without him being stopped by prison security.

Something was clearly allowed to happen. 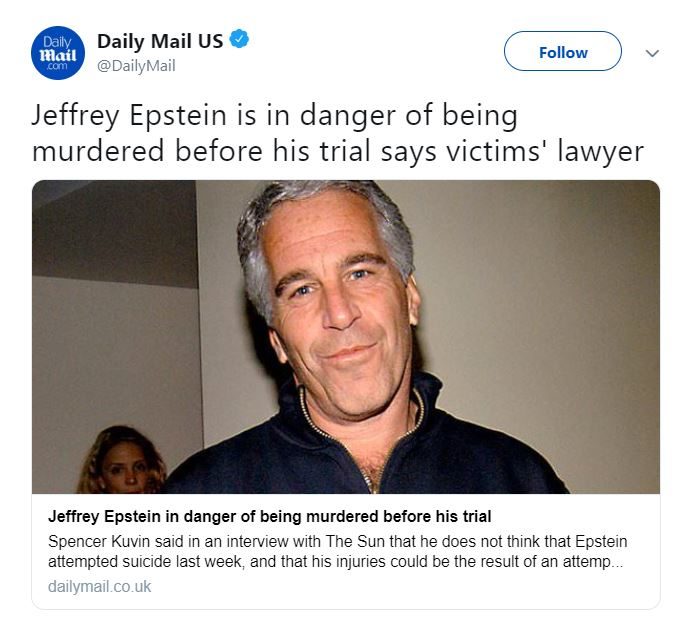 People close to the case warned of Epstein’s probable murder weeks before it happened.

A few weeks ago, Spencer Kuvin, a lawyer who represented three women in the 2008 trial against Epstein, said this about Epstein’s first “suicide attempt”.

“I question whether or not it was a true suicide attempt that Mr Epstein was involved in in jail or whether or not there may be some powerful people who just don’t want him to talk. If he goes on trial, everyone he’s been in contact with will ultimately be fair game. There’s no doubt in my mind that no jail will protect you when there’s powerful people that want to reach you – wherever you are. If he’s going to implicate anyone in power that has the ability to reach in and somehow get to him – his life is definitely in jeopardy.

I do question whether it was a true suicide attempt. I mean how do you choke yourself? It doesn’t make any sense. There are reports someone came after him but that could just be because he’s a paedophile. Those types of individuals don’t last long in prison. If Epstein is in general population or anywhere available to the general population I believe his life is in jeopardy. They will have to seal him down in the jail. But even there there are still people who can get to him, ultimately.”
– The Sun, ‘IN DANGER’  Jeffrey Epstein’s life ‘in jeopardy’ as powerful pals ‘don’t want their secrets out’, victim’s lawyer claims

Because Epstein had to die.

Consequences of His Death

The death of Epstein is extremely convenient for the world elite. While mass media was extremely careful to not communicate information that could harm its elite owners, a long trial presented high risks of sensitive leaks. High-powered individuals from all around the world were at risk of being involved in a sordid affair involving the trafficking and abuse of minors. On a wider scale, the sick, twisted culture and lifestyle of the world elite was being exposed.

Furthermore, a closer inquiry into some “non-profit organizations” such as the Clinton Foundation (with which Epstein was deeply involved) and Ghislaine Maxwell’s TerraMar Project could have opened a gigantic can of worms. They do not want the masses to discover the real reason why the elite is so concerned with Haiti and why so many people go down there to do “charity work”.

Now that Epstein is dead, will the federal case keep going forward? Even if it does, lots of powerful people are now off the hook. And media will gradually stop reporting on what actually happened on Epstein Island and the Lolita Express.

Once again, the occult elite flexed its power by killing a liability in plain sight and, chances are, nobody will be held accountable. Except maybe a scapegoat or two.

Burying Tunnels? Epstein Had $100,000 of Cement Delivered to His Island Before His Arrest