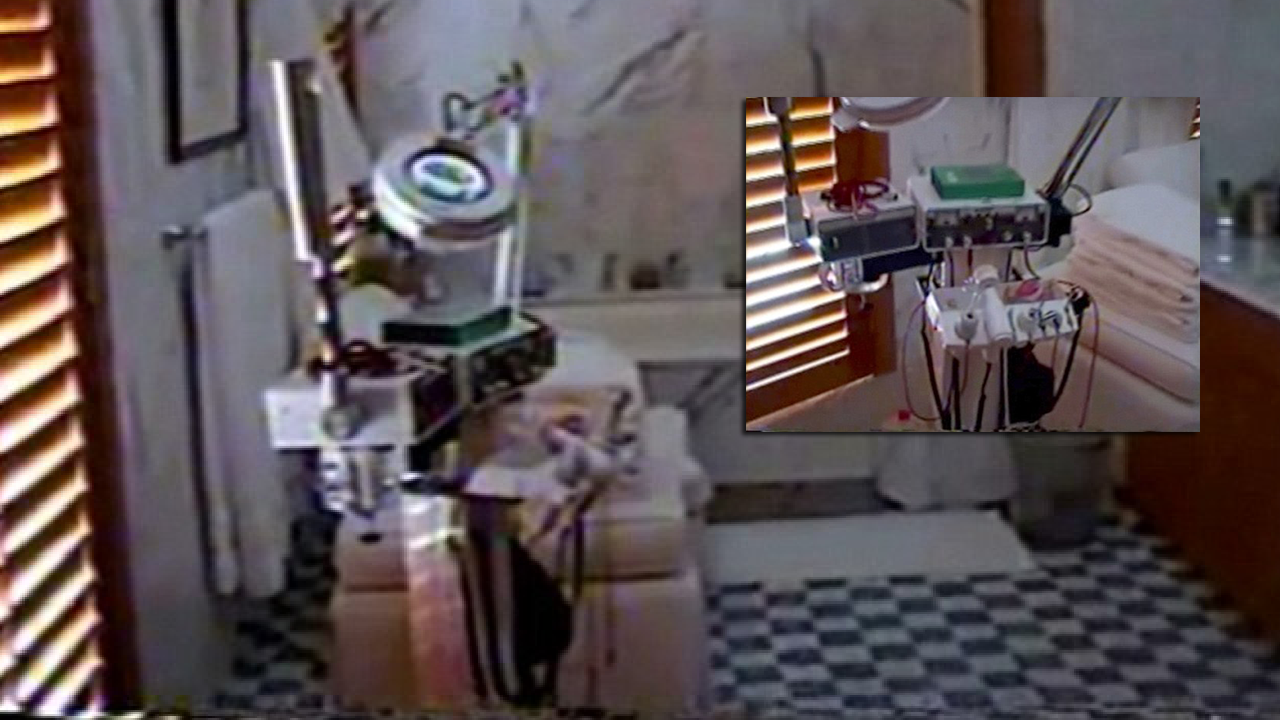 Things are not going well for Jeffrey Epstein. He is currently detained at the Metropolitan Correction Center in Manhattan which is considered to be the U.S. strictest prison. Epstein is held in the most secure area of this prison, where fluorescent lights are never switched off. Inmates experience almost no human interaction, are kept in their cells for 23 hours each day, and CCTV cameras watch them as they shower, go to the bathroom and sit alone in their heavily barricaded cells.

Despite these facts, Epstein was found in his cell “semi-conscious, injured and in a fetal position” with marks on his neck. A week later, investigators are still trying to “piece together” what happened in Epstein’s cell and the Federal Bureau of Prisons still refuses to comment on the incident.

Considering the high-tech surveillance equipment at the Metropolitan Correction Center, the mystery surrounding the incident is bizarre. Some news sources claimed that Epstein tried to hang himself or faked an injury in order to be moved elsewhere. Others believe that a hit was called against Epstein.

According to Spencer Kuvin, a lawyer who represented three women in the 2008 trial against Epstein, the billionaire’s life is in clear and present danger. Kuvin believes that a hit was ordered against Epstein to make sure he won’t testify against his elite friends.

“I question whether or not it was a true suicide attempt that Mr Epstein was involved in in jail or whether or not there may be some powerful people who just don’t want him to talk. If he goes on trial, everyone he’s been in contact with will ultimately be fair game. There’s no doubt in my mind that no jail will protect you when there’s powerful people that want to reach you – wherever you are. If he’s going to implicate anyone in power that has the ability to reach in and somehow get to him – his life is definitely in jeopardy.

I do question whether it was a true suicide attempt. I mean how do you choke yourself? It doesn’t make any sense. There are reports someone came after him but that could just be because he’s a paedophile. Those types of individuals don’t last long in prison. If Epstein is in general population or anywhere available to the general population I believe his life is in jeopardy. They will have to seal him down in the jail. But even there there are still people who can get to him, ultimately.”
– The Sun, ‘IN DANGER’  Jeffrey Epstein’s life ‘in jeopardy’ as powerful pals ‘don’t want their secrets out’, victim’s lawyer claims

While Epstein’s stay in prison is far from comfortable, his previous life was all about comfort, luxury and the disgusting abuse of children. Pictures taken inside his Florida mansion during a raid prove this fact.

The Daily Mail recently obtained a video of a police raid on Epstein’s Florida mansion in 2005. Some of the items found on the site are extremely disturbing. For instance: Why is there a fully equipped dentist chair in his house? 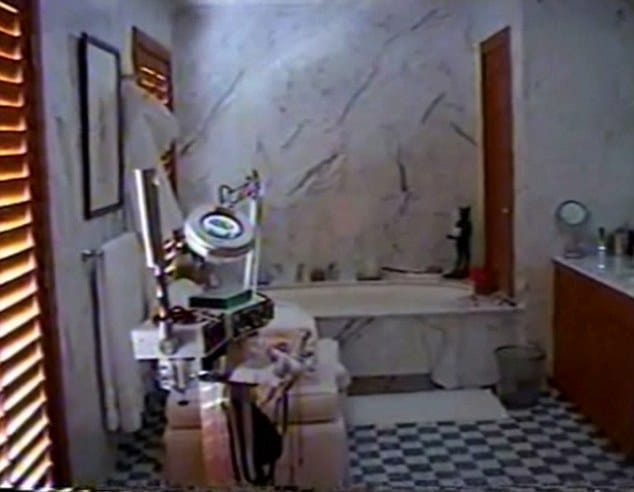 A fully equipped dentist chair was found inside the bathroom. 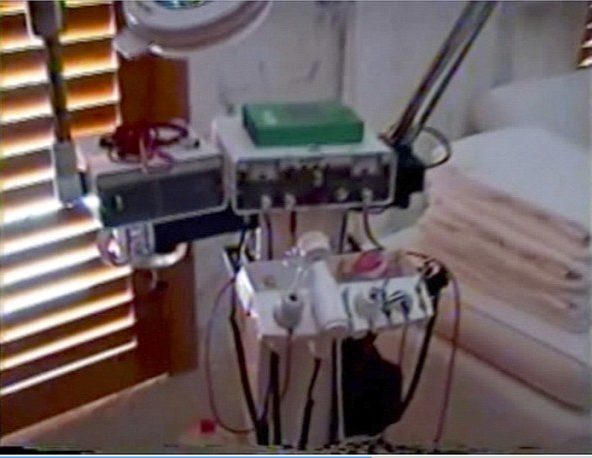 Next to the chair is a cart containing a lamp, drills and other instruments used by dentists.

Fourteen years later, there is still no clear explanation as to why this dentist chair was in his home. Did Epstein get dental work done at home?

Update: Although the Daily Mail article and other sources described this item as a “dentist chair”, it actually appears to be a high-frequency machine used by aestheticians to perform facials. 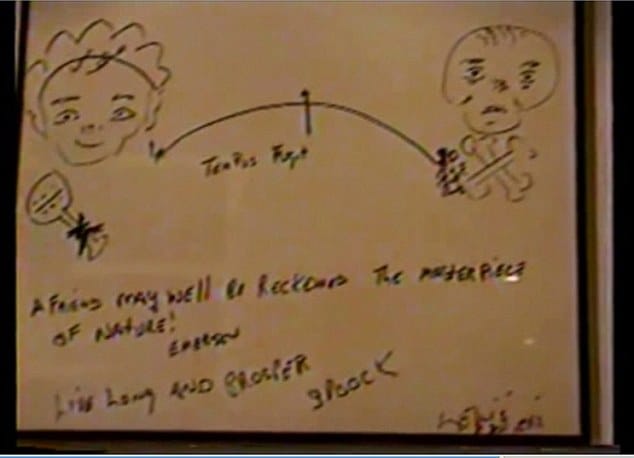 On a wall is a bizarre drawing of a baby and a skull.  Underneath the drawings are the quotes “A Friend May Well Be Reckoned The Masterpiece Of Nature” by Ralph Emerson and “Live Long and Prosper” by Spock.

The mansion contained many other items typically owned by child abusers. 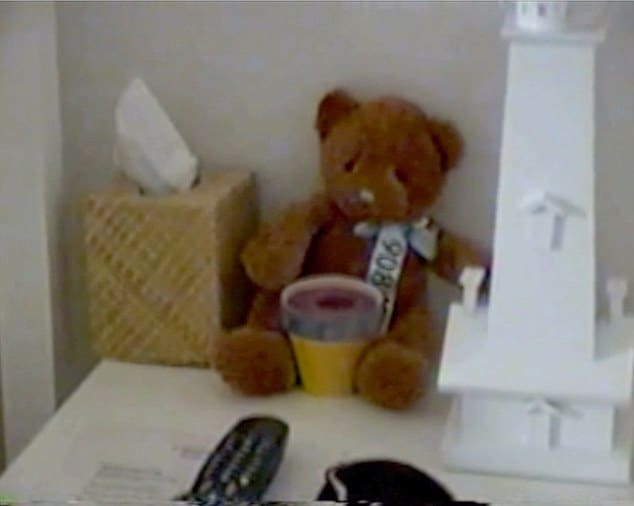 A teddy bear sitting on a nightstand. 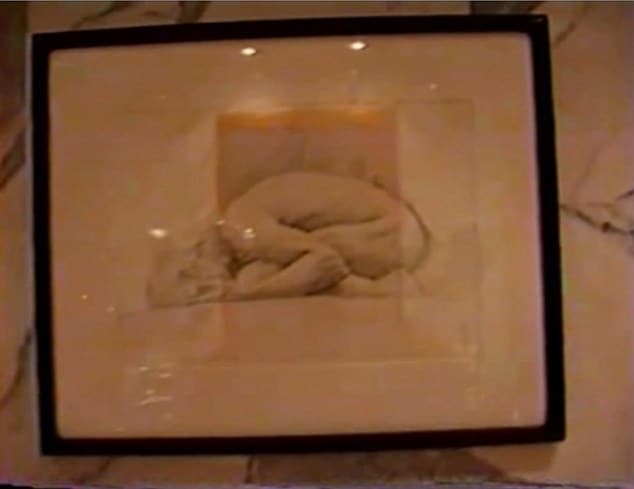 A sketch of a person in pain and despair. 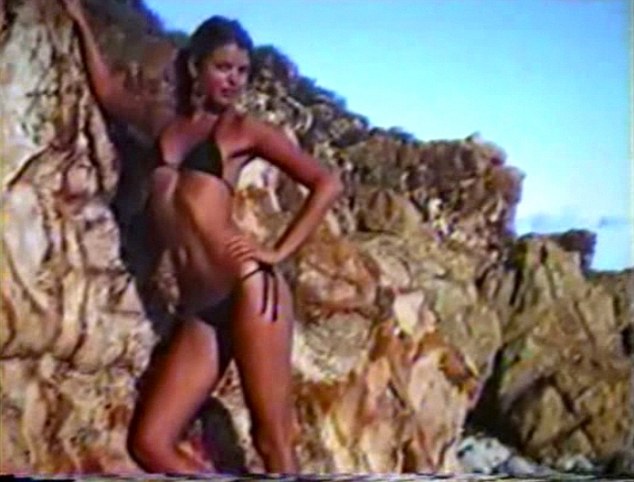 A picture of a teenage girl (around the age of 15) in a tiny bikini. Was the pic taken at Epstein Island? 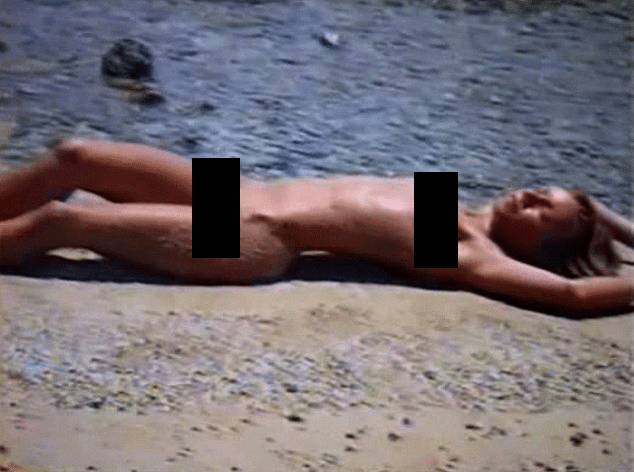 Another unidentified woman lying on a beach. 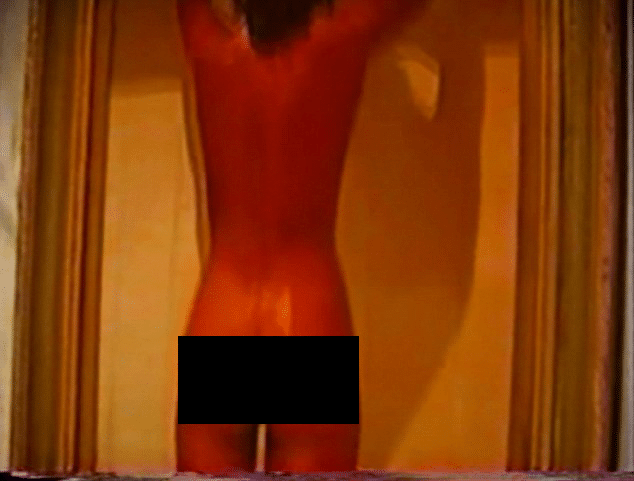 A picture of a naked young woman with her arms above her head. Was it taken before abuse?

Pictures of babies and children. 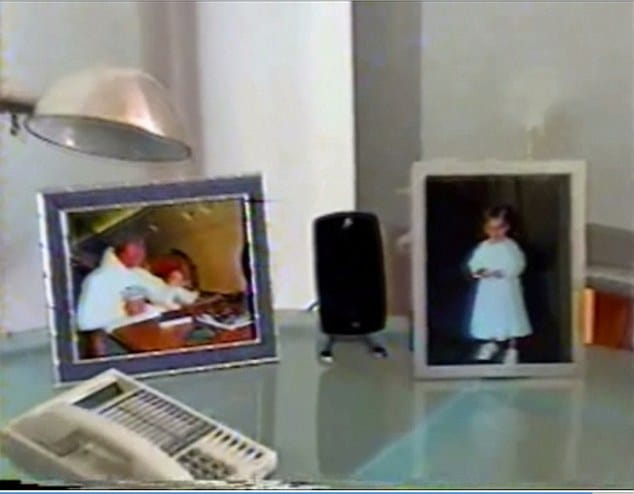 Pictures of an unidentified man with a baby and a young girl in a white dress. 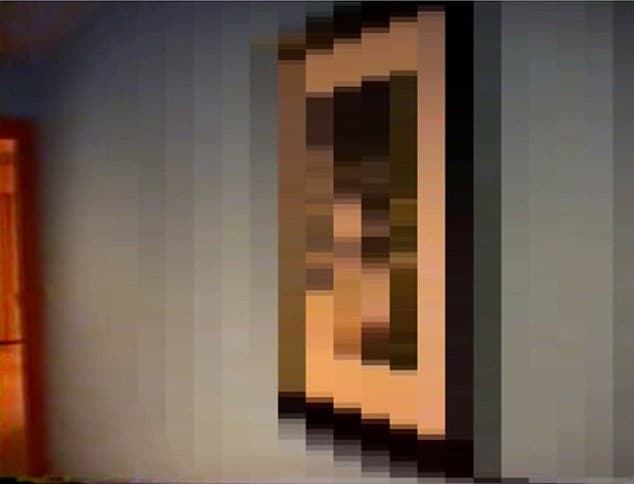 Some pictures were so vile that police censored them in the raid video. This picture is said to depict a 6-year-old girl bending over in a tiny dress. 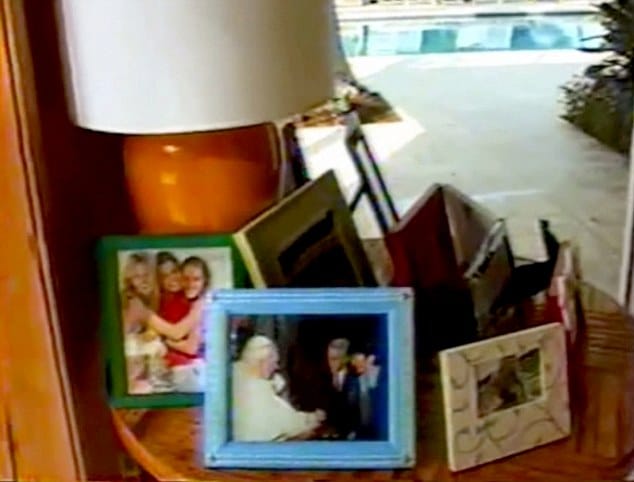 A picture of Epstein and his “girlfriend” Ghislaine Maxwell with Pope John Paul II.

Ghislaine Maxwell – the daughter of British media tycoon Robert Maxwell – was described by Epstein as his “main girlfriend”. However, newly unsealed court documents reveal that Maxwell was actually a “madam” who recruited young victims and abused them alongside Epstein.

There are lots of pictures of Ghislaine Maxwell in Epstein’s mansion. 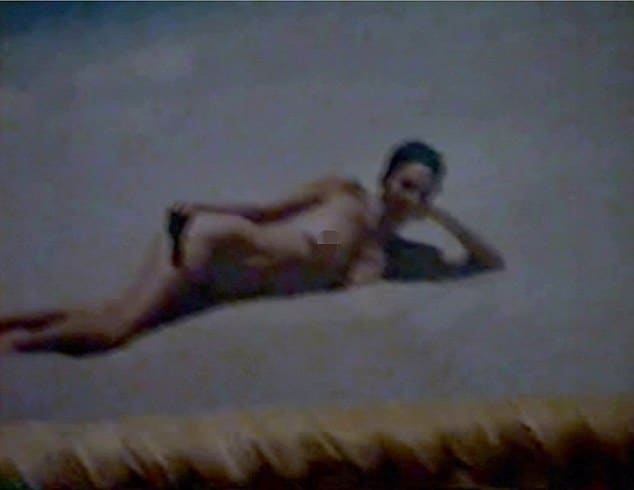 This picture of Ghislaine Maxwell naked is one of the many found around the house. A portrait of Ghislaine above a toilet bowl. 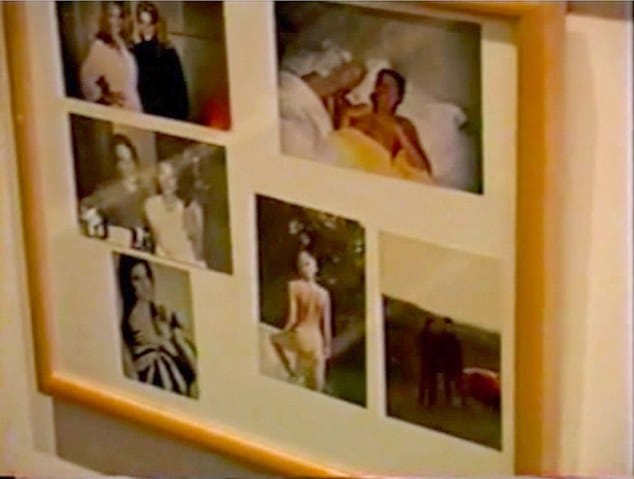 Various pics including a topless woman and two people in bed.

As stated above, these images were taken in 2005. If you believe that Epstein’s 2008 conviction for soliciting a minor for prostitution changed his ways, you’re dead wrong.

The FBI raided Epstein’s Manhattan mansion in July 2019 and the findings were quite damning as they matched descriptions made by alleged victims. Although no images are currently available of the raid, the U.S. Attorney’s Office in Manhattan revealed some of the objects found on site. Here are some of them:

Images from the raid would most likely reveal lots of additional information.

Images from the 2005 raid do not only prove that Epstein was a pedophile, they also prove that he fully adhered the occult elite’s culture of child abuse and mind control. They do not simply indulge in abuse, they celebrate it through “art” and shape their entire lifestyles around it. They spend an astonishing amount of time and energy to recruit minors and to lure them into their sick den of abuse. It is all systematic and organized, and it involves the richest and most powerful people on earth.

Who said that this was all a “conspiracy theory”?

Jeffrey Epstein: The True Ugly Face of the Occult Elite