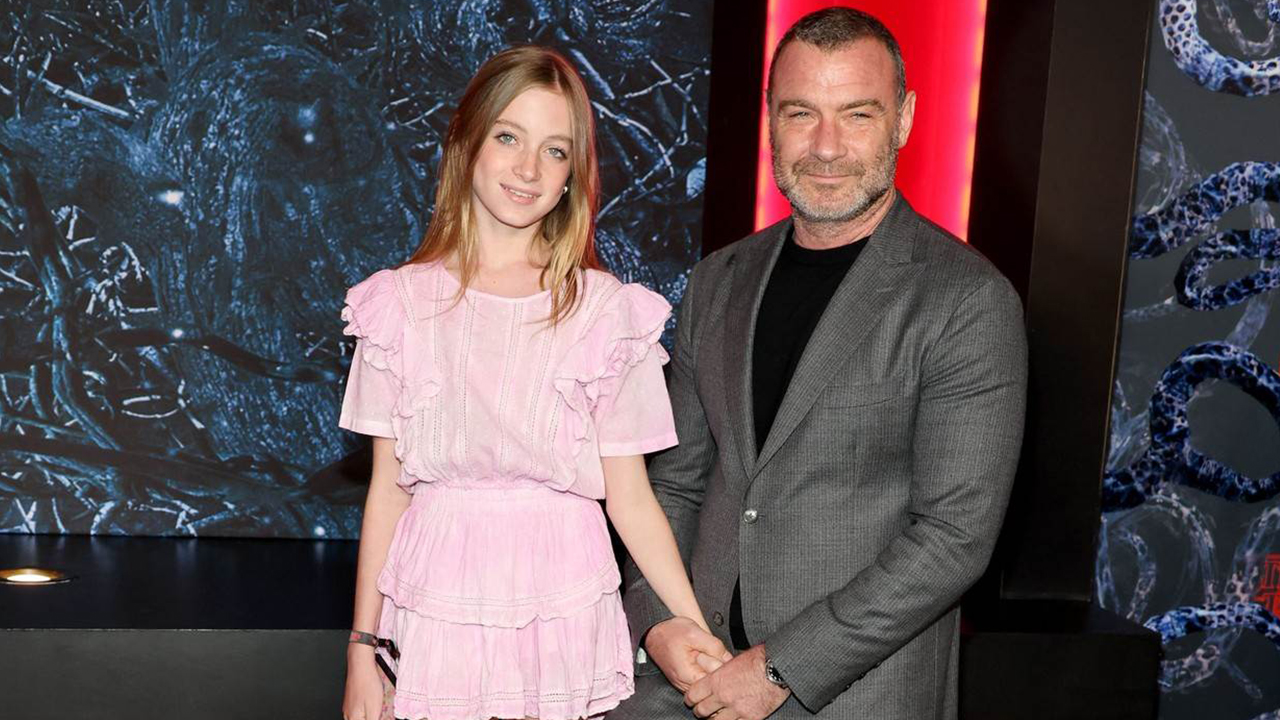 I do not particularly enjoy discussing the children of celebrities. These kids did not choose to live under the spotlight and they deserve to enjoy normal childhoods. However, some celebrity parents do everything in their power to thrust their children under that proverbial spotlight. They are paraded around at social events, publicized all over social media, and some are even used as props for PR stunts and general virtue signaling.

While that behavior is already exploitive in its own right, another level of strangeness has been emerging in Hollywood in the past years: Little boys walking around in dresses. And some are as young as TWO years old. And many of them wear outfits that are weirdly revealing and sexualized. It has become something of a “trend” among the Hollywood elite, a fashionable thing to do. Of course, mass media outlets inevitably shower these parents with praise because they allow their children to “express themselves”.

But what if it was the exact opposite? What if some of these boys were groomed and forced to dress and act as girls for some kind of insane reason? Wouldn’t that qualify as a particularly insidious form of child abuse? Here are some examples of this trend. 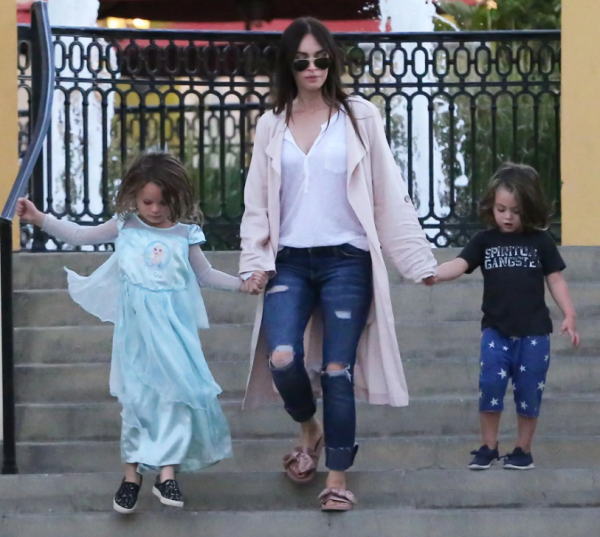 Megan Fox (who recently revealed that she took part in actual blood rituals with MGK) had been dressing her son Noah as a girl since he was two years old. TWO.

Seriously, how can a two-year-old boy take the profound, life-altering decision to switch genders? He can barely form a coherent sentence. Can he fathom the physical and psychological implications of such a decision? Of course not. He’s too occupied sticking his finger in power outlets. 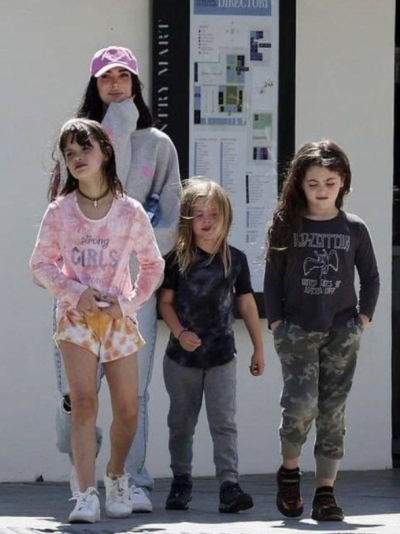 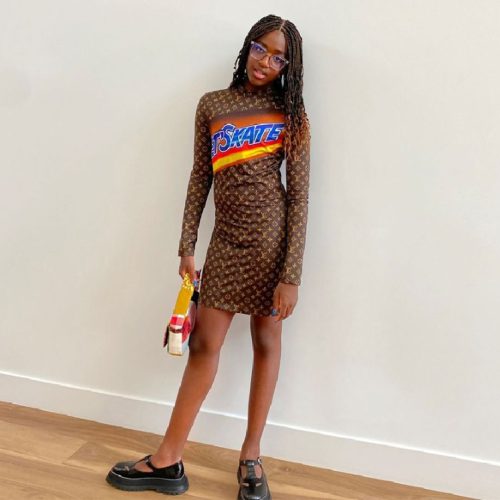 The “coming-out” of Zaya Wade at age 12 was followed by a massive media tour and fashion deals. Even Michelle Obama chimed in and showered everyone involved with praise. 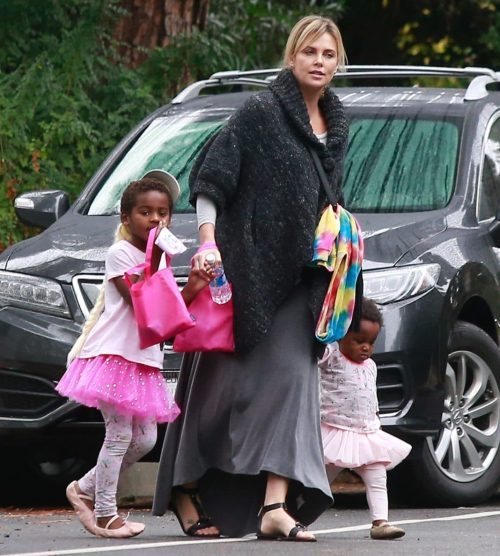 Charlize Theron’s adopted son Jackson has been wearing dresses since he was about 5 years old. 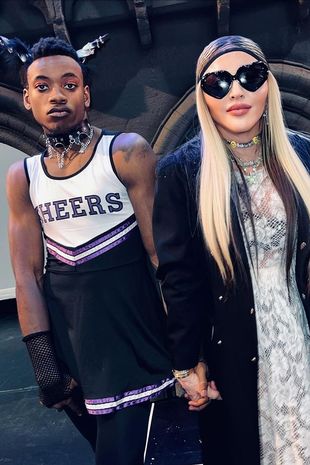 Madonna’s 16-year-old adopted son David Banda is being pushed into the spotlight. And that spotlight craves boys in dresses. Here, he’s wearing a cheerleader’s outfit, complete with devil horns and a choker.

While these cases are all concerning in their own right, one of them is particularly concerning: Kai Schreiber.

For years, pictures of Liev Schreiber with his son Kai have been raising some eyebrows. But when one pieces these various elements, the raised eyebrows turn into outright concern. 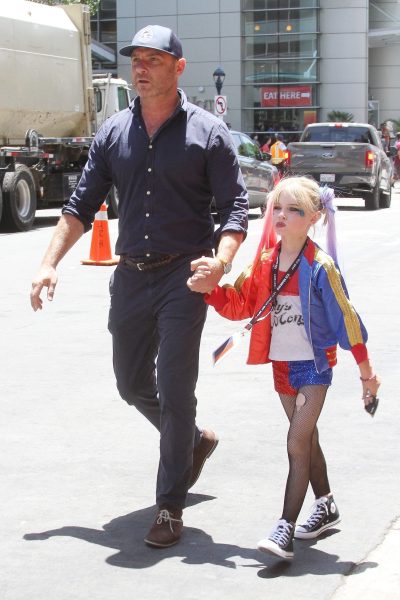 In 2017, Liev Shreiber brought his then 8-year-old son Kai to Comic-Con dressed as Harley Quinn.

It is no secret that Harley Quinn is a highly sexualized character. Despite this, Liev brought his son Comic-Con (which is packed with dudes who fantasize about these types of characters) dressed as Harley Quinn, complete with makeup and ripped stockings. Why. 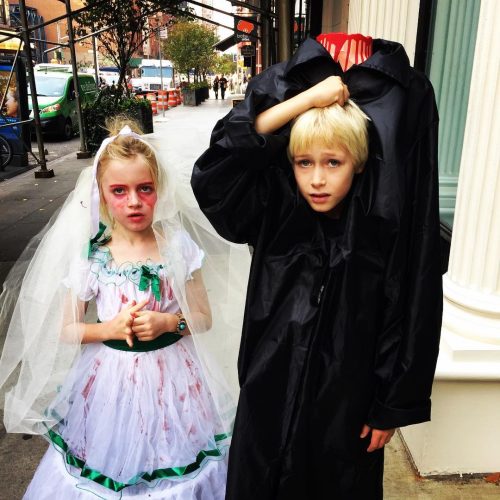 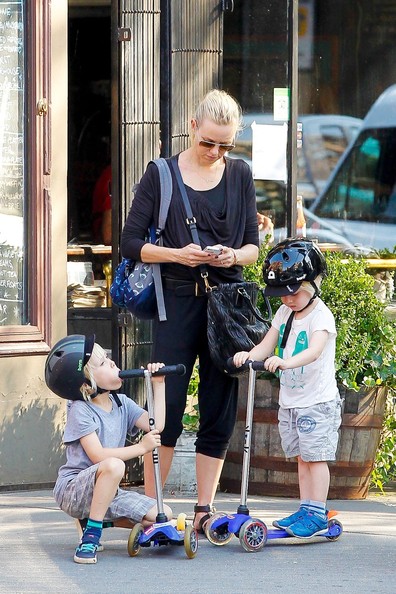 While this is all bizarre, one can react to these pictures with a heartfelt “whatever”. But, sadly, it gets worse. 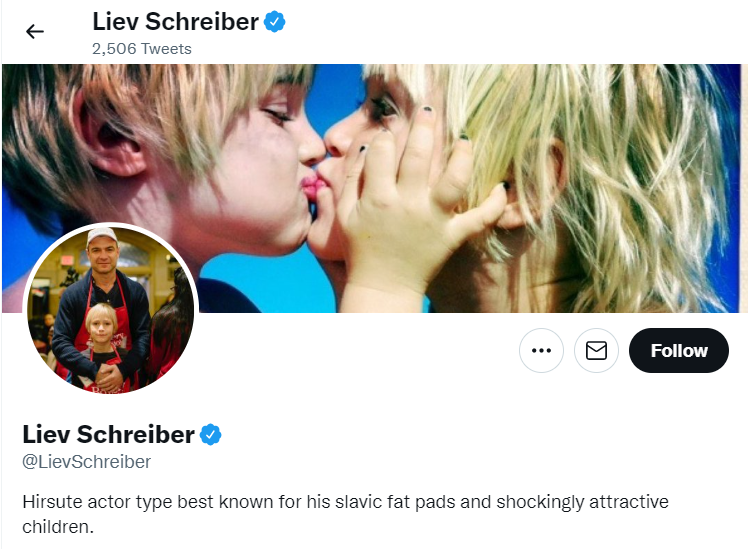 Schreiber’s current Twitter profile features a picture of his children wearing makeup and kissing on the lips. His bio talks about his “shockingly attractive children”.

Schreiber did not use the word “beautiful” to describe his children. He used the word “attractive”. MacMillan Dictionary defines “attractive” as:

With that being said, here’s another picture of Liev with Kai. 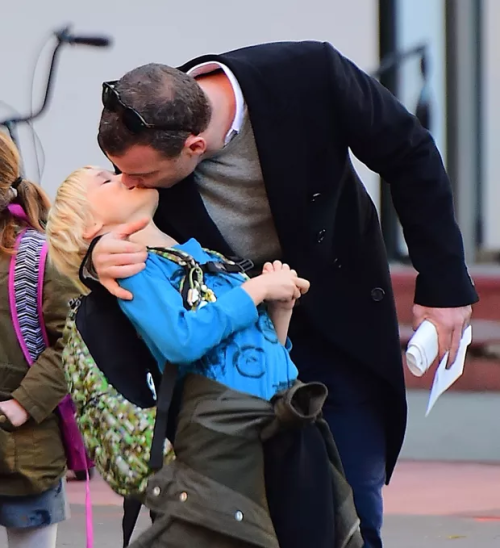 Who kisses their son that way?

In 2017, Shreiber was on the Ellen show. And he talked about his children (as usual). And it was weird (as usual).

– My sons and I have this thing that we do where we bathe and then we do the “willy dance”.

– It is. There are other words for it but that’s pretty much the best one.

– It is a way to dry off because you chafe down there if you don’t get dry.

Then, a flustered Ellen drinks some tequila, and everyone laughs. This story is probably not made-up. 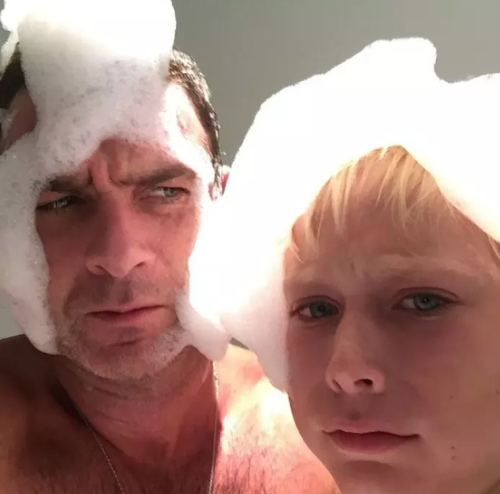 Shreiber posted this picture on Instagram where he’s bathing with his son. 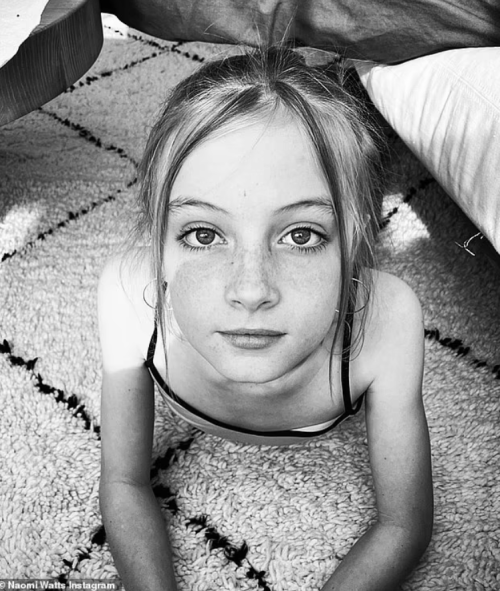 In 2021, Naomi Watts posted this picture of Kai wearing a string tank top and earrings to celebrate his 13th birthday. Why.

What kind of person would actually enjoy this type of picture? It is almost as if they want to attract the wrong type of attention to this teenager. 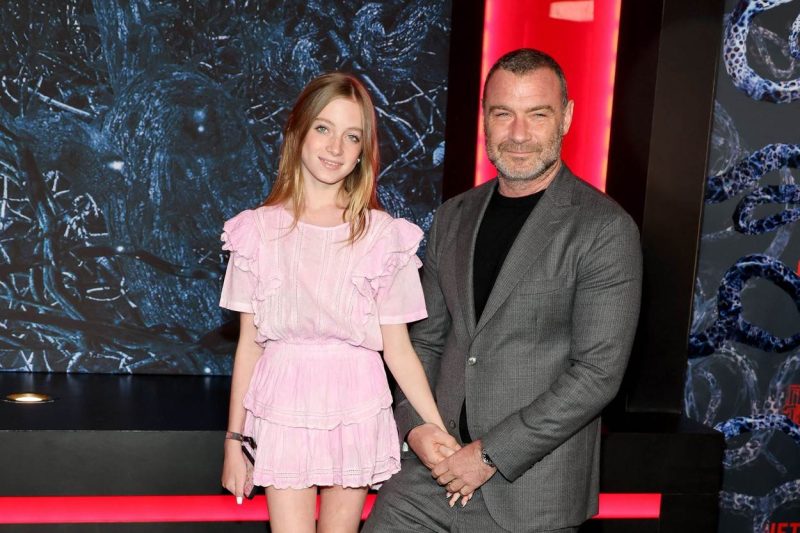 Shreiber and Kai at the Stranger Things season 4 premiere.

What the hell is going on with the hand placement in the above picture? Why isn’t anybody in mass media commenting on any of this? Here’s an example of what is being said in mass media (which is slowly descending into all-out delusion).

An honest picture caption would be:

“Shreiber’s son Kai is inexplicably being paraded around at a premier he has absolutely nothing to do with while wearing a short pink dress and taking weird pictures with his father”.

A couple of weeks later, other bizarre pics of Kai popped up in mass media. 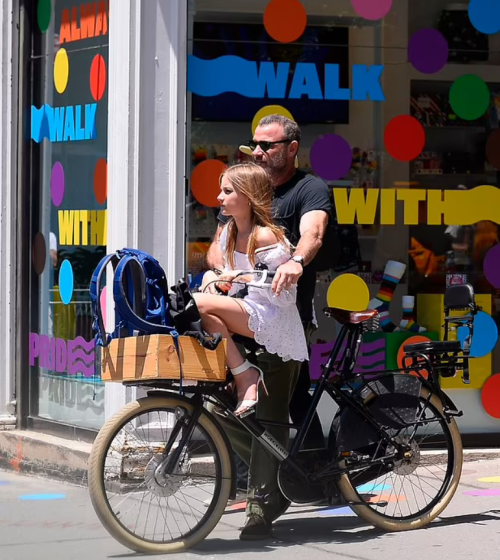 Kai rides a bicycle while wearing a dress and high heels. Why.

If these pictures made you sick to your stomach, I’m sorry. However, that unpleasant gut feeling you’re experiencing is your body telling you that you’re witnessing something that is deeply wrong and unnatural. And this is all happening on purpose.

For years, I’ve been documenting the gender-blurring agenda which is based on the assertion that genders are social constructs. That same agenda claims that toddlers can make the life-altering decision of switching genders while promoting the usage of extreme drugs such as hormone-blockers. That same agenda is also creeping into elementary school curricula because “they” know that indoctrination must happen at a young age to permanently affect the psyche.

Hollywood is yet another arm of that agenda. While its industry is based on make-believe, real actual children are being dragged into this mess. When one combines this agenda with Hollywood’s notorious obsession with preying on children, we get little boys who walk around in dresses as mass media showers everyone with praise.