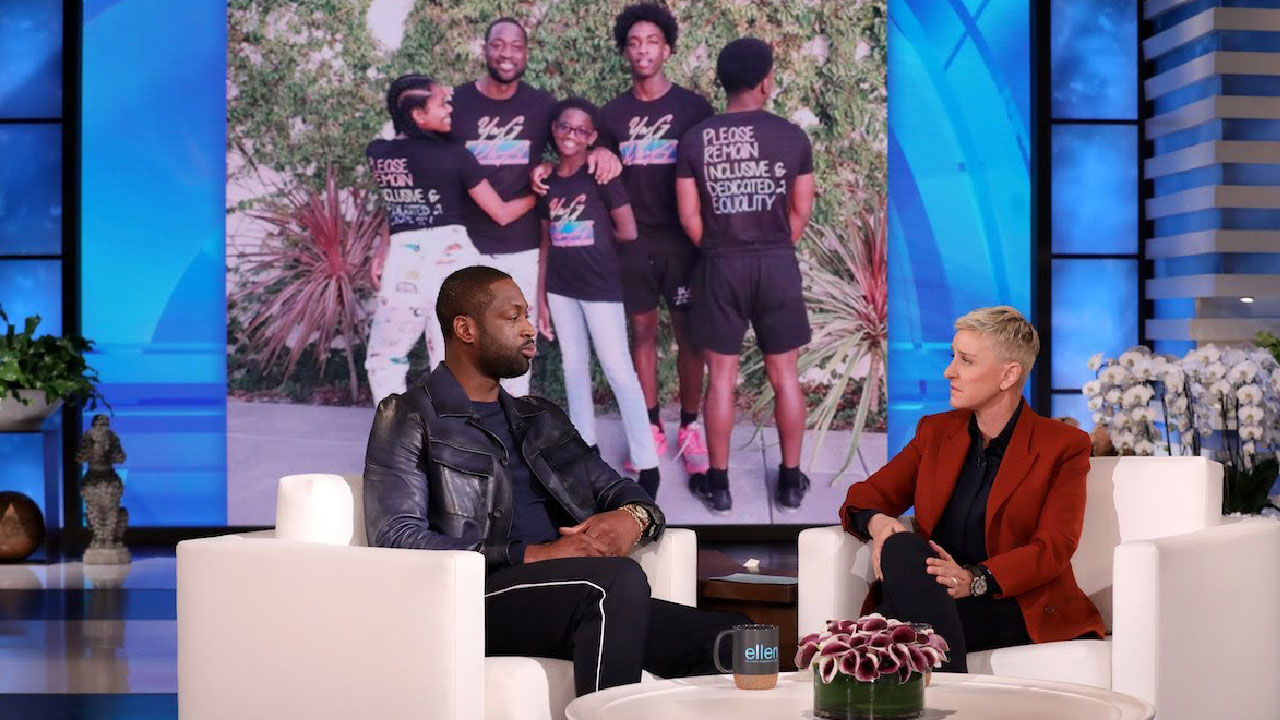 Although Dwyane Wade retired from the NBA in 2019, he definitively did not retire from the spotlight. Quite to the contrary, in the past weeks, Dwyane Wade was everywhere: Multiple interviews on major TV shows, countless articles by major news outlets, an upcoming ESPN documentary and all kinds of social media attention. He even recently recorded a song with rapper Rick Ross.

Why is the proverbial spotlight steadily shining on him these days? Is it because of his accomplishments with the Miami Heat? Of course not. It is because an agenda is being pushed.

Indeed, at the beginning of this media tour, Wade announced that his 12-year-old son Zion now identified as female and is now called Zaya. While this piece of personal information could have remained private, it certainly did not remain that way. Quite to the opposite, Zion’s gender switch, complete with the required use of the pronouns “she/her”, is currently being “promoted” with a massive media tour.

This specific agenda was identified on this site several years ago and it keeps intensifying. The most insidious part of it all: It actively and aggressively targets young people and their parents.

Dwyane Wade’s media tour was carefully planned and it was calculated to reach a specific target audience: Black people who grew up listening to rap (and its glorification of the strong male archetype) and who are now becoming parents.

As expected, this media tour was received with strong reactions from the black and hip-hop community. And that was the goal all along. Here’s a look at this media tour. 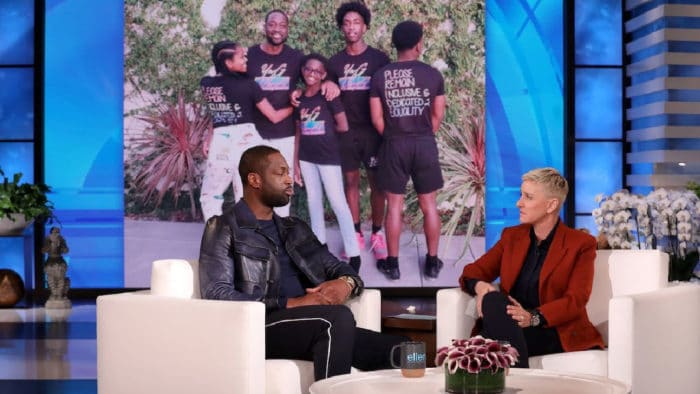 The media tour began when Wade revealed on Ellen that Zion identified as female. He said:

He also explained that Zaya is destined to become a leader.

“Once Zion came home and said, ‘Call me Zaya,’ and ‘I’m ready to take on this,’ I looked at her and said, ‘You are a leader. It’s our opportunity to allow you to be a voice,’ Right now, it’s through us, because she’s 12 years old, but eventually, it will be through her.”

Apparently, there are big plans for Zaya. 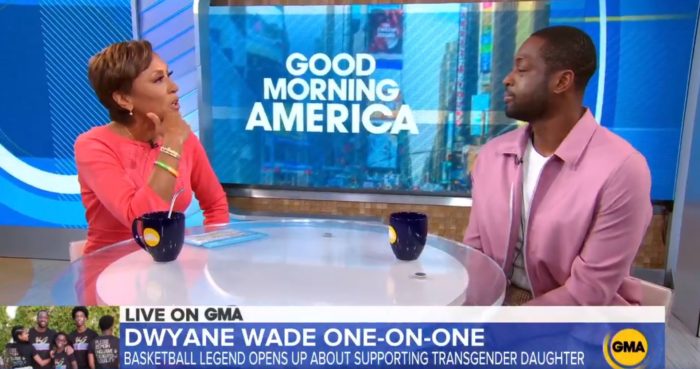 During that interview, Wade talked about Zaya explaining to him her identity.

Wade also went on less popular shows such as Watch What Happens Live with Andy Cohen where he stressed the importance of using the correct pronouns. 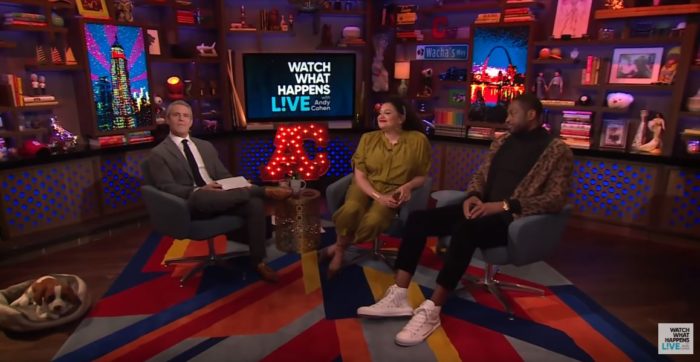 Wade on Watch What Happens Live with Andy Cohen.

Zaya also made an appearance on the jumbotron at AmericanAirlines arena during Wade’s retirement ceremony. 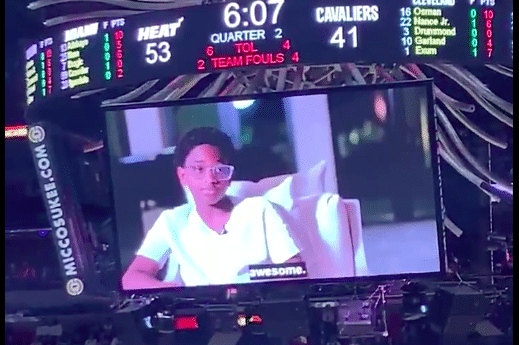 Zaya’s appearance on the jumbotron caused the audience to erupt in applause.

As a family, we believe inclusion and equality are two essential pillars needed to move towards growth and progressive thinking and action in our society. We have created a Limited Edition T shirt to help create a more inclusive space with our platform. The Wade family and @yngdna have decided to donate $50k and 50% of the proceeds of sales of the Pride shirts to The GLSEN organization whose mission strives to ensure safe schools for all students, regardless of sexual orientation as well as gender identity. For 25 years GLSEN has been the leading national organization focused on ensuring safe and affirming schools for LGBTQ+ students #StopKillingBlackTransWomen #StopKillingTransWomen #TransWomenAreWomen #SupportingEachOtherWithPride PS @kaaviajames has a very cool @yngdna Pride piece coming soon 👼🏾👼🏾👼🏾

As it is the case with all mass media blitzes, a flurry of news articles shaped the narrative. In other words, they told people what to think about the situation.

A headline from Vox that sums up mass media reception of the news.

HuffPost posted an article in its “parenting” section about Zaya and included a tidbit about kids knowing their “true” gender at … three years old.

Kids know their gender identity from a young age

A British and American joint study published last year found that trans kids as young as three years old were able to understand their gender identity.

“One of the most consistent themes is that at some early point, sometimes as early as age three to five, there’s this feeling that the individual is part of another gender group,” said Charlotte Tate, a psychologist at San Francisco State University and herself a trans woman, speaking to The Atlantic.

When told that they’re part of their assigned gender, “they’ll say, ‘No, that’s not right. That doesn’t fit me.’ They have self-knowledge that’s private and that they’re trying to communicate.”
– HuffPost, Zaya Wade, Dwyane Wade And Gabrielle Union’s Daughter, Talks About Her ‘True’ Gender

As expected, this announcement generated some strong responses across the black community. It was the perfect occasion to frame the debate and to deem anyone who voices concerns about this situation as “transphobic”.

Some media sources were waiting for dissenting views to surface in order to knock on them. Hard. It is a lesson to other celebrities: Don’t criticize or you will also get knocked.

On February 20th, rapper Boosie Badazz took to Instagram to share his point of view regarding Zaya.

“I gotta say something about this sh*t, bro. Dwyane Wade, you gone too f*cking far, dawg. That is a male. A 12-year-old. At 12, they don’t even know what they next meal is gonna be. They don’t have sh*t figured out yet. He might meet a woman, anything, at 16 and fall in love with her. But his d*ck be gone—how he gon’—like, bruh, you going too far, dawg.

The reaction was quick: Boosie was accused of being “transphobic” by mass media. He also got banned from his gym because of this.

Young Thug, a rapper who is ironically known for wearing dresses, also gave his opinion on that matter. And he got knocked. Hard.

Although the tweet was short and to the point, it generated pages of responses. Of course, he was slammed all over mass media and there were talks of “canceling him”.

A headline from E! News accusing Young Thug of transphobia and knocking him for using a masculine pronoun while referring to Zaya.

Actor and singer Serayah also gave her two cents on the situation. 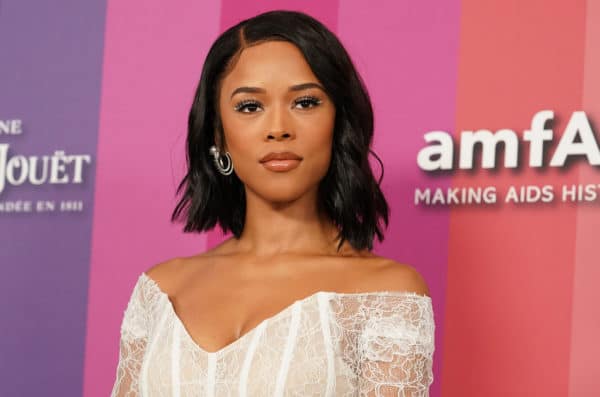 In a series of IG videos, she said:

“I think everything is a little bit too premature. I don’t care if you’re boy or a girl, for me, there’s other things we need to be worried about at this time. There are so many others things around that in society that is pressuring children and parents to be a certain type of way. Let’s just take back the reins, it’s OK. But right now, let’s not go there right now. Let’s wait till you get a little bit older, and this is exactly what you want to be and do for the rest of your life.”

The response was immediate:

The word “transphobic” is thrown around again in this Billboard headline.

Of course, others flew to the rescue of Zaya and were immediately praised for it.

A headline from NBC News.

“I feel like people are saying that this kid is too young to transition, but it’s like, how old is too young? What is the age limit for you to know that that’s what you want to be?

If you’re born like that, then you’re going to forever be like that. What’s the point of you being older and then transitioning and being like, damn, I should have been through this.

This media tour about Zaya’s gender change was not random nor spontaneous. It was a carefully planned media blitz that had a couple of clear objectives. First, it was about “educating” parents on the proper way of addressing children’s gender issues. Media is telling us that toddlers as young as three know that they’re the wrong gender. Therefore, parents need to go for the name change, the pronoun change and, eventually, the gender-blocking hormones and surgery. The second objective of this blitz was to bait criticism to then immediately tag it as “transphobic”.

Through this blitz, the entire narrative around the gender of children (who did not even reach puberty) is properly framed. “Correct” responses are praised while “incorrect” ones are punished, which encourages other critics to remain silent.

In short, this entire episode was yet another installment of the very pervasive gender-blurring agenda. The ultimate goal of it all? An entire generation of young people confused about their own gender and parents who feed that confusion.

Coronavirus Was Eerily Predicted in a 1981 Novel