On May 14, a plane carrying children landed at the Wilson Air Center in Chattanooga, Tennessee. It was 1:30 am. In the following days, TV station WRCB spotted three other planes carrying between 30 – 50 children at the airport. Each time, the children came out of the planes wearing matching bags and entered buses that were headed to various destinations.

Here are some images captured by WRCB. 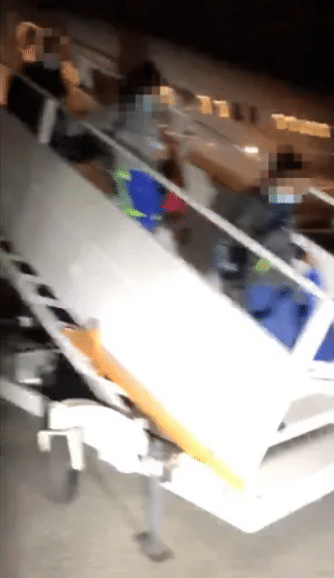 Children believed to be in their early teens leave the plane. 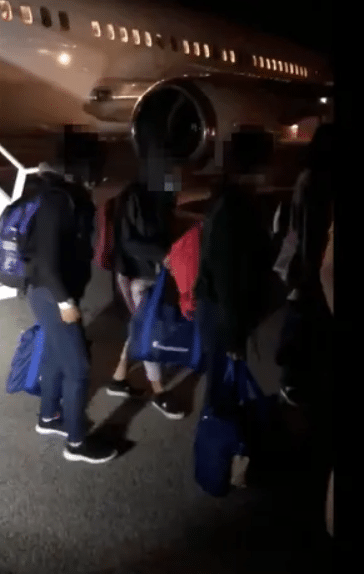 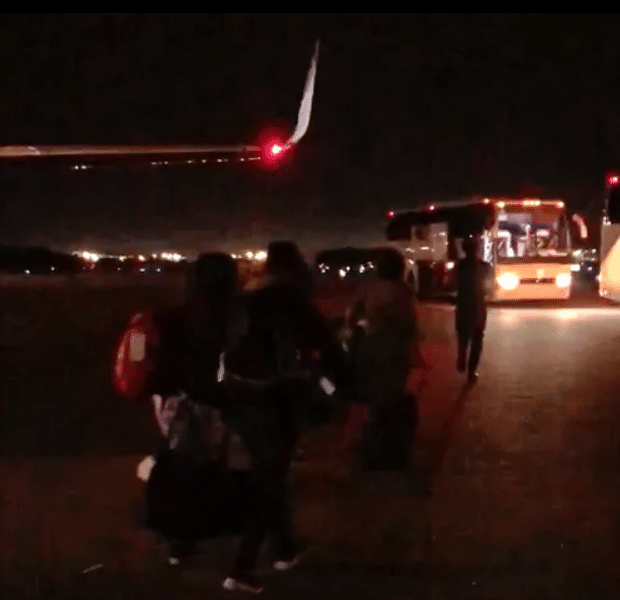 The children are directed to buses that were waiting for them on the runway.

Two of the four buses in the video are owned by Coast to Coast Tours of East Point, Georgia.

According to a Coast-to-Coast employee, the buses were dispatched to Chattanooga as part of a contract with the United States Department of Defense. The employee says this was the first time the company had been asked to pick up migrant children in Chattanooga. In the past, the company’s drivers have traveled to Mobile, Alabama, and Atlanta to transport children, according to the employee.

She confirmed the two buses seen in the video left Chattanooga for Miami, Florida, and Dallas, Texas. She added that the children are not allowed to get off the bus during the trip and three or four chaperones, who are not employed by the bus company are onboard at all times. She says the bus company requires chaperones when transporting “children under the age of 18.”

Other than this employee, absolutely nobody involved in this operation was willing to provide any kind of information.

Chattanooga Airport spokesperson Albert Waterhouse says the airport is not involved with the coordination of the operation.

“Wilson Air Center Chattanooga is a fixed base operator that provides only the necessary operational support, such as fueling and other ground services, to inbound and outbound aircraft,” said Waterhouse.

Channel 3 submitted a request to the Department of Defense about the efforts. A spokesperson directed us to the U.S. Department of Health and Human Services.

“From what I can tell, these were flights facilitated by HHS,” said LTC Chris Mitchell, Department of Defense Spokesperson. “The only support DoD is providing with respect to the unaccompanied minors is land and facilities for HHS to temporarily house them.”
Channel 3 has reached out to HHS for comment but has not yet heard back.
– Ibid.

One source told the TV station that this operation was recently moved to small airports to “avoid attention”.

A source with direct knowledge of the operation asked to remain anonymous but tells Channel 3 that approximately 30 to 50 minors are transported at a time, some to reunite with family members and others to go to group homes. He says the operation started in Dallas, Texas, but moved to small airports recently to avoid attention.
– Ibid.

Why is there so much secrecy surrounding this operation? Tennessee Senator Marsha Blackburn stated that the transportation of migrants took in ‘the dead of night without the knowledge or permission of the communities involved.’ She added:

On May 27th, another plane landed in Knoxville, Tennessee at 11:19 pm. Again, it was filled with children 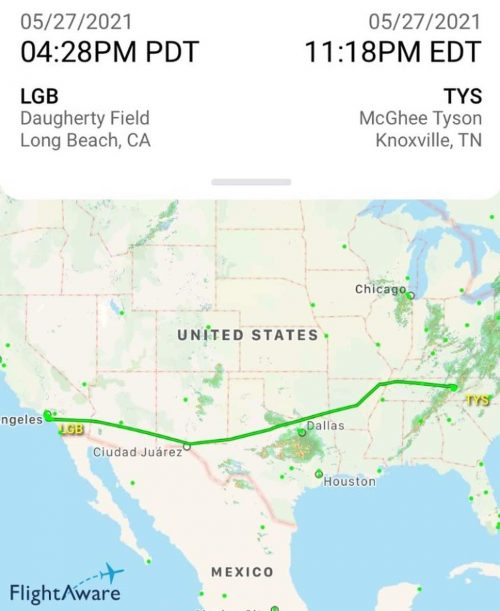 None of these children on board were accompanied by parents.

Video captured by WATE 6 shows some children boarding two charter buses from Malone Busing, a company based in Cleveland, Tennessee. Other children were met by unidentified adults. A few adults were seen receiving a packet before leaving the airport on their own accord with at least one child, sometimes more.
– WATE 6, Plane believed to be carrying migrant children lands at Knoxville airport

Once again, nobody involved with this operation was willing to answer questions.

Officials with the White House, the Office of Refugee Resettlement, city leaders in Long Beach, California, and their Joint Information Center, as well as McGhee Tyson Airport either declined knowing the purpose of the flight or its passengers, or did not respond to questions.
– Ibid.

Another news station, WVLT, attempted to obtain information regarding this mysterious flight but everyone involved responded in a cagey matter.

When contacted by phone, The Malone Bus Company based in Cleveland, Tennessee, hung up when asked questions about why its buses were being used. Later calls to the company were then sent straight to voicemail. The Malone Bus Company was the same company that was hired to transport migrants last week from Chattanooga.
A McGhee Tyson Airport spokesperson said they did not have any information because the plane landed at TacAir, a fixed-based operator that works with private aircraft. WVLT also spoke with airline officials who said policy prevents them from sharing a comment.
– WVLT, Flight carrying unidentified children lands in Knoxville

Finally, White House Press Secretary Jen Psaki addressed the reports during a press briefing. She commented on the administration’s goals for the flights.

“Tennessee is a state right in the middle of the country and some kids have to travel through there to get to their destination and we’ve been very clear that our objective is to treat these kids humanely, get them to safe homes especially homes of loved ones and sponsor families.”

While Psaki stated that the goal of this operation was to connect these children with sponsor families, some officials believe that there is something much darker going on.

Not unlike Senator Blackburn, the Governor of Tennessee Bill Lee stated that he was not made aware of the flights, nor was anyone on his team. After learning about this operation from the news, he released this statement:

“When we demanded answers, they cut off transparency & emboldened one of the worst human trafficking crises we’ve seen at our border in the last 20 years. I commend Senator Hagerty and Senator Blackburn for calling this out. Tennesseans deserve to know who is coming into our state.”

“Children being human trafficked across our border into this country and then dispersed across the border is unacceptable. This is a policy of an open border that incentivize the human trafficking of children and it should absolutely be stopped.”

If this operation was simply about transporting children to sponsor families, why is there so much secrecy surrounding it? Why were the flights moved from Dallas to small airports to “avoid attention”? Why is the transportation of these children happening at night? Why aren’t local officials aware of what is happening in their own state? Why is everybody involved in this operation forced to remain silent?

Furthermore, how can we be sure that the “sponsor families’ are not actually fronts for child trafficking organizations? There are no documents proving the existence of these children and they can easily disappear without a trace. In fact, it has been happening for years.

“A top official with the Department of Health and Human Services told members of Congress on Thursday that the agency had lost track of nearly 1,500 migrant children it placed with sponsors in the United States, raising concerns they could end up in the hands of human traffickers or be used as laborers by people posing as relatives.”
– NY Times, U.S. Loses Track of Another 1,500 Migrant Children, Investigators Find

Is a massive child trafficking operation happening right in front of our eyes?

If you know something about the occult elite, you’re probably aware of its darkest secret: It requires a constant supply of children to fuel its many horrific deeds. These include MKULTRA, satanic ritual abuse, pedophile rings, prostitution, blood sacrifices, and more. One must be completely blind to not realize that the scattering of undocumented migrant children across the country in the middle of the night to unidentified “sponsors” is the perfect way to supply these networks.

The occult elite wants open borders across the world for many reasons. One of them is because they provide an unlimited supply of children to feed underground networks. If these children were truly about to be united with loved ones, we’d see tear-jerking videos about them reuniting which would make amazing PR for the government. However, that’s not what’s happening. At all. These children are moved in the middle of the night as if this was a black op. Because that’s what it is.

FacebookTwitterSubscribe
Related Topics:featuredpedogate
Up Next