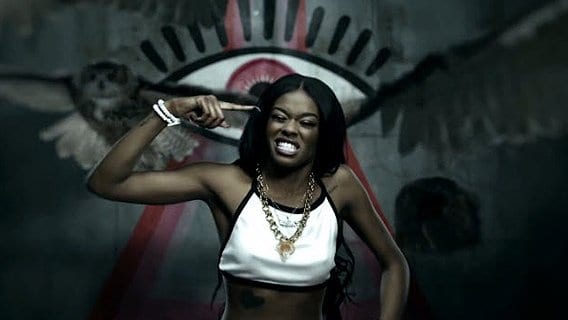 Azealia Banks is a new rap artist garnering a lot of media attention. Unsurprisingly, her first major single is dedicated 100% to Illuminati symbolism and the Elite Agenda. We’ll look at the occult symbolism of the video “Yung Rapunxel”, more proof that the Illuminati Agenda is becoming increasingly prevalent with each new artist going “pop”.

Azealia Banks signed with Interscope Records (home of countless “industry puppets”) in 2011 and since then, she’s basically been all about Illuminati symbolism … and a strange Internet controversy. I first heard of Azealia Banks in 2012 when the music producer Munchi got mad at her and tweeted: “Go be a puppet b*tch to someone else“. Azealia then replied “@originalmunchi thinks I’m in the illuminati… I’m being very serious right now.”

Munchi then posted more details on Facebook. Regarding the “Illuminati” reference, he wrote.

“I think she is in the Illuminati (thirsty for fame and success by portraying occult references in every step you take is not something i want to affiliate with. Even less because it is a hype nowadays, it’s f*cking music yo).”

One year later, watching her first single Yung Rapunxel, we can conclude that Munchi was right. Of course, she is not IN the Illuminati. She is just another face used to push the same Agenda that is being pushed by countless other artists. Yung Rapunxel is indeed a rehashing of a lot of the Illuminati symbolism described on this site, mixed with some disturbing images for extra shock value. There is no deep storyline going on, just some strong visuals that blatantly communicate that she is completely on board with the Elite Agenda. Let’s look at the symbolism of the video.

In Your Face Illuminati

Yung Rapunxel recalls the name “Rapunzel”, the fairy tale princess who was trapped in a tower and who used her long hair to allow her Prince Charming to climb up to her. However, the video has absolutely nothing to do with any of that: It’s all disturbing images and Illuminati symbolism. Nothing more, nothing less. As usual, the artist is portrayed as a person with little to no control over her own mind, surrounded by the elite’s symbolism and, to top it off, some police state promotion.

The video begins with an image that sums up the whole situation at hand. 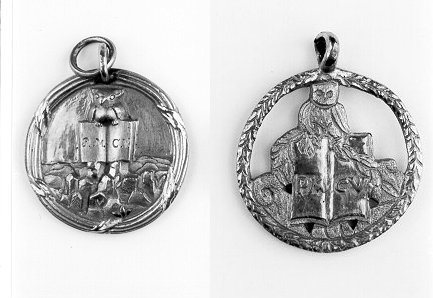 The first level of the Bavarian Illuminati was called “Minerval” and was represented by Minerva’s Owl. This pendant was worn by actual Bavarian Illuminati initiates. The logo of the Bohemian Grove, the elite’s yearly gathering in California, is also an owl.

Inside Azealia’s head, there’s some hypnotic stuff going on, all related to Duality. MK Slaves are programmed to have a dualistic mind, with one personality mirroring and opposing the other.

Inside Azealia’s head, there are multiple symbols representing the concept of duality such as the opposition of the colors black and white, the waning and waxing moon and the circular Yin Yang symbol. Also, the Hamsa symbol (the hand with an All-Seeing Eye) is there – probably to add an All-Seeing Eye to the mix.

The above symbols closely resemble an important symbol in Wicca: the Triple Goddess. 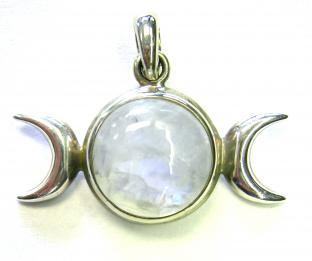 In another scene, the concept of the union of opposites is depicted in classic occult symbolism.

While not inherently “evil”, the symbols described above are definitely not there to communicate profound messages about the meaning of life. They’re there because they represent the occult elite, ruled by secret societies like the O.T.O who revel in that symbolism. In short, it is about indoctrinating people with symbols they know nothing about because they represent those who rule the world. One scene appears to be reflecting this idea.

Here, Azealia raps in front of a giant triangle topped by an All-Seeing Eye while owls fly around her. Could this be more blatantly Illuminati?

As if all of the above imagery wasn’t enough to make this video an Illuminati manifesto, there is yet another crucial part of the Agenda that is in this video: Police State imagery. In the 2010 article The Transhumanist and Police State Agenda in Pop Music, I described how videos are used to normalize the concept of a repressive police state. More than three years later, the trend is more prevalent than ever. Yung Rapunxel is yet another pop video featuring, for no apparent reason, police in riot gear.

Go away, nobody wants to see that in a music video.

At first, Azealia “rebels” against the police by doing something that is beyond useless: She breaks a glass bottle on the police’s protective gear. Of course, this “rebellion” causes no damage the police squad at all. What’s the point of that scene? Is it a way of saying that it is useless to fight against the police state?

Well, Azealia apparently thinks so because she gives up and she even literally bends over backward in front of the police.

Azealia is probably not the best person to lead a revolution. Breaking a bottle on a helmet and bending over backward is not a winning strategy.

With this, I pretty much described every single scene in the video – all of them having some sort of relation to the Elite Agenda. Oh wait, I forgot about one scene:

What is this? Kill it with fire!

It is rather difficult to watch Yung Rapunxel without being slightly annoyed and disturbed by it. Many “edgy” Illuminati videos indeed leave viewers with a “wrong” and “uneasy” gut feeling because they tend to tap into negative energy. Judging by Yung Rapunxel’s YouTube “likes” and “dislikes”, this video is definitely not a fan favorite – and I’m guessing that those in charge were kind of expecting that response. But yet, it’s there, as if to say that the Agenda is more important than the artist. Her Interscope Records label-mate Lady Gaga also released disturbing Illuminati-fueled videos and in doing so alienated a lot of her fan base who didn’t relate to that crap. But, once again, the Agenda is more important than the artist. If people get tired of an artist, another one will get signed and push the same thing.

Some might say: “LOL Azealia be trollin yall consparacy peeps with that Illumanaty shyt!”. That’s what I’ve been told countless times about Gaga, Ke$ha, Rihanna and many others. Those who attempt to rationalize this strong current claim that these artists are doing it on purpose to get sites like Vigilant Citizen riled up. Does it make sense that all of the biggest stars in the world, with the million dollar machine backing them, are gearing their entire product towards “trolling” a few Internet websites in order to MAYBE get mentioned by them? That doesn’t make sense. The fact is: The music industry is used by the powers that be to indoctrinate young people and push a specific Agenda. And if a rapper jumping around in front of a pyramid, All-Seeing Eyes and owls and submitting to an oppressive police force is not enough to convince you, then I guess nothing will.

MTV VMAs 2013: It Was About Miley Cyrus Taking the Fall