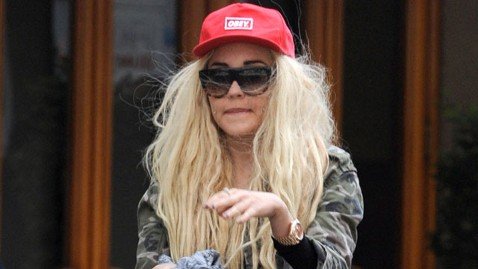 Amanda Bynes’ metamorphosis from a promising child star to a bizarre woman with worrying behavior is yet another example of how the MK-Ultra entertainment industry messes up the minds of those who grow up within it. While most media sources cite “drugs” or “mental problem” as causes of her erratic behavior, these are only symptoms of the true issue here: Bynes is yet another former child star going through a MK programming meltdown.

Bynes began her acting career at the age of ten and quickly obtained her own show at Nickelodeon. From there, she followed the unfortunate pattern of going from a star admired by children to a “barely-legal” sex bomb to then turn into a bizarre tabloid celebrity with erratic behavior. Is that pattern familiar? Look at the paths taken by other products of Hollywood Mind Control such as Britney Spears and Lindsay Lohan and see if you see similarities. 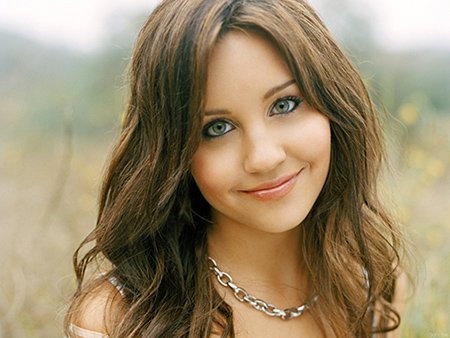 Like many other child stars, Bynes started as a beautiful, down to earth girl with eyes that convey intelligence (according to IMDB, she was a straight-A student). 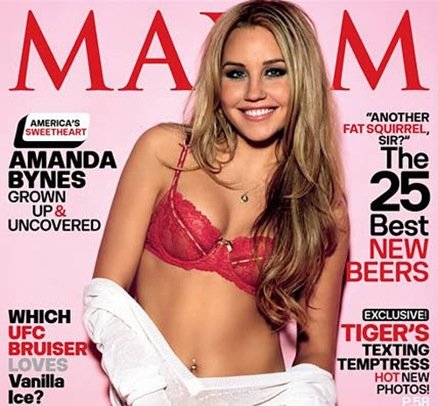 When she reached legal age, mass media undressed her and told the world: “Hey, she is not minor anymore! It is now safe to sexualize her!”. How many child stars went through that process? How many lead great and healthy lives afterwards? Not many. 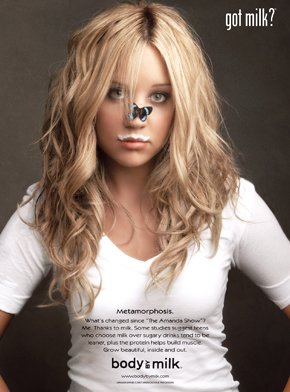 This “Got Milk” ad is about “metamorphosis”. However, the metamorphosis Bynes’ went through in the years following that ad were definitely not due to drinking milk but to Monarch Mind Control. Maybe that is why there’s a butterfly on her nose.

Now, at age 27, Bynes looks and acts extremely different, as if she was thoroughly traumatized and “re-programmed” in the past years. Was it Monarch Mind Control? When approaching the age of 30, MK slaves often go through a meltdown – a result of the their minds and bodies not being able to cope with the intense trauma they are subjected to anymore (to learn more about Monarch Mind Control, read my article entitled Origins and Techniques of Monarch Mind Control).

Not unlike Britney Spears, Bynes was spotted acting strange in public places, wearing bizarre clothes and even shaving her hair. Here’s a video summing up her recent “meltdown”.

Since then, things got even weirder when as she began posting tweets and videos displaying increasingly worrying behavior. Her tweet requesting rapper Drake to “murder her vagina” confused many as her odd choice of words maybe revealed an unhealthy relation with her own sexuality.

This “selfie” video freaked out quite a few people as is not only indicative of someone that is “not well” – It almost looks as if it’s a MK programming glitch.

Not unlike other products of Sex Kitten programming, Bynes feels the need of getting people’s attention with her sexuality. 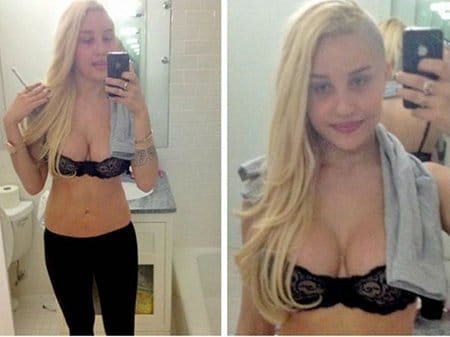 In the past few days, things got even more worrying when publicist Jonathan Jaxson contacted the NYPD last week because Amanda told him “I don’t want to live anymore”.

“Amanda had called me and we had a private conversation, but it was clear to me that she was high on drugs. Then, she said that she didn’t want to live anymore. I took that as that she wanted to kill herself. I freaked out. I had heard stuff like this from Amanda before. But this time, I had a mental image of her in a bathtub, wanting to hurt herself. Then I saw a photo of her in her bathroom that she’d posted on Twitter. I freaked. I did not know what else to do. I thought consciously about it for a minute and decided to call the authorities. I thought, ‘I have to do something to save her’. When someone tells you they don’t want to live anymore, that in itself would provoke anyone who cares. I know that Amanda is a person crying out for help.

Thankfully though Amanda is alive, but she is still not good. Hopefully people and the media now understand that this is no longer a joke and she get the help she needs”.
– Source: Radar Online

While many people in media now perceive Bynes as some sort of running gag, her “antics” are becoming increasingly disturbing and worrisome. Her actions cannot simply be explained away with “drugs” – They are symptomatic of a deep-seated psychological process that thoroughly modified her, physically and mentally. It is said that “Eyes are the window to the soul”. Well, look at her eyes then and now. This is what years of industry Mind Control does to a soul.

From a child star, to sex bomb to loose canon, Amanda Bynes is going through a pattern that is constantly repeated in the entertainment industry. How come these starlets go through the exact same stages? It is because they went through the same “school”: Industry Mind Control.

The End of April: A Time of Human Sacrifice