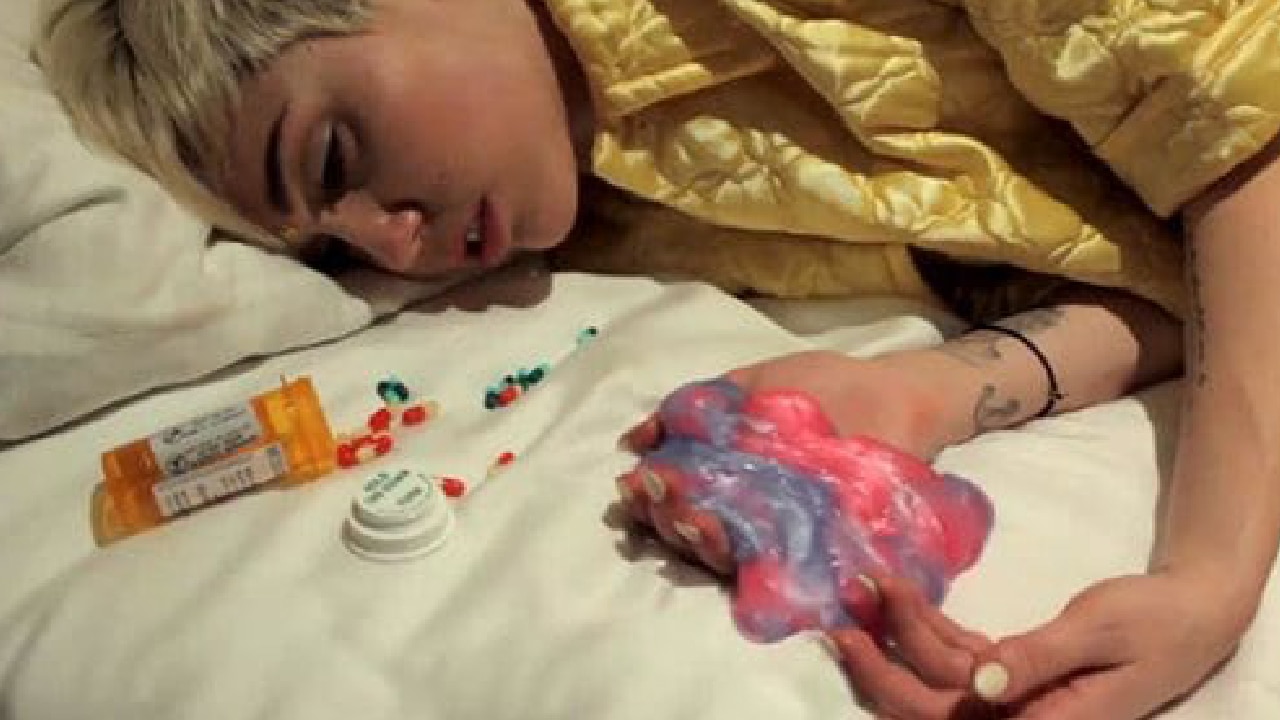 A “trippy” video featuring Miley Cyrus, the Flaming Lips and Moby is actually about Mind Control. It was filmed when Cyrus was “hospitalized” which is often a code word for “re-programming”.

Miley Cyrus is definitely the current poster girl of Mind Control in the entertainment industry and there is no lack of material proving it. Only a few weeks ago, a video came out while she was under “doctors care” that was purely about mind control (see the article about it here).

Her latest video, entitled Blonde SuperFreak Steals the Magic Brain was filmed WHILE Cyrus was hospitalized and is described as “completely insane” by most commentators. Watching this five minutes compilation of loud noise and upsetting visuals is indeed an excruciating experience. I could easily picture the video being forced fed to MK slave to torture them. I’m not even joking. (You can watch the video here, if you wish to suffer for a few minutes – warning NSFW).

The video story is something like this: Moby is an evil, power-hungry cult leader. He wants the world’s most valuable (according to our story) psychedelic supernatural possession… John F. Kennedy’s brain….the brain contains the original formula for the drug LSD!!!

Miley Cyrus has the magic brain!!! And Moby enlists a nympho Manson girl-type blonde superfreak to go steel the brain from Cyrus.

She steals the brain from Cyrus while Cyrus is still in bed in a drug-induced coma. Cyrus finally wakes up and is mega-pissed that her BRAIN has been stolen. She enlists a burned-faced Santa and a lesbian Bigfoot ( that are hovering in a nearby spaceship) to hunt down the blond superfreak that stole her brain. They have a relentless pursuit, all the while Cyrus laments the loss of her magic brain and Moby gains powerful rainbows from hell. In the end, the blond superfreak kills Santa and Bigfoot and a baby mole ends up with the brain…”

Oh yeah. And the Flaming Lips are disguised as rainbows, mushrooms and flowers watching from the sky room where a giant diamond explosion happens.”

While it is easy to dismiss the video as a “crazy video about drugs” there is much more involved here. Even the above description contains quite a few references to MKULTRA.

First, the use of LSD on Mind Control subjects is a well-known fact. It is even clearly mentioned in the Wikipedia entry for LSD.

In the 1950s, officials at the U.S. Central Intelligence Agency (CIA) thought the drug might be applicable to mind control and chemical warfare; the agency’s MKULTRA research program propagated the drug among young servicemen and students.

Moby plays the role of an “evil, power-hungry cult leader” – which can easily be a reference to a Mind Control handler. 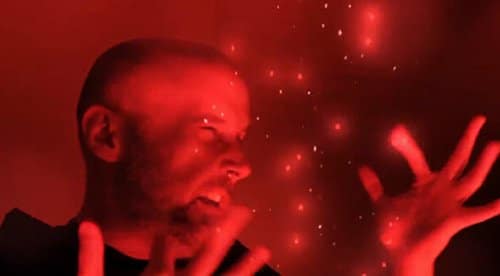 MK handlers use elements of black magic, spirit possession and ritualistic theatrics to traumatize their victims.

The cult leader “gains powerful rainbows from hell” which can refer to the fact that handlers traumatize their victims to “go over the rainbow” – a code word for dissociation.
The cult leader enlists a “nympho Manson girl-type blonde superfreak” to steal Miley Cyrus’ brain. The choice of words here is important. “Nympho Manson-girl type blond superfreak” aptly describes a MKULTRA Beta Kitten. The serial killer Charles Manson was both an MK slave and programmer. His “girls” were given great amounts of tinted LSD while being brainwashed and manipulated by him to commit horrific crimes. The words “blonde superfreak nympho” all refer to Beta Programming. 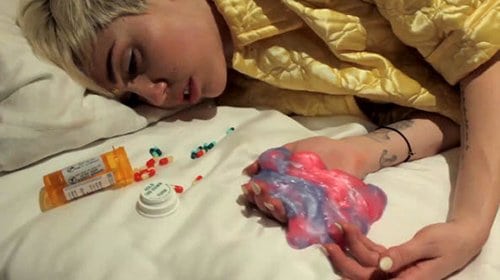 Cyrus is drugged with pills and is comatose while holding a brain in her hand – all ways of showing that she’s an MK slave. 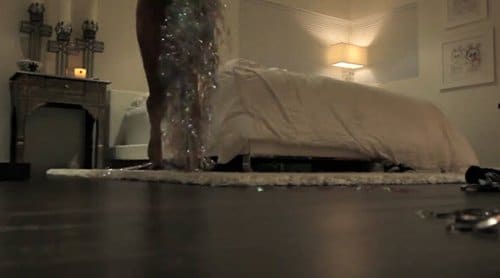 The superfreak enters Miley Cyrus’ room to steal her brain. “Stealing one’s brain” is an apt way of describing what handlers do to MK slaves during programming. Notice that there are blinds on the wall but no window – a way of saying that Miley lives in a world of illusion.

Then Miley calls a burned-faced Santa and a lesbian Bigfoot (LOL so random, LOL drugs) to get the brain back but the superfreak kills them both. No need to make sense of any of this. It is MKULTRA garbage disguised as “LSD-inspired art”. The next image sums up the entire video. 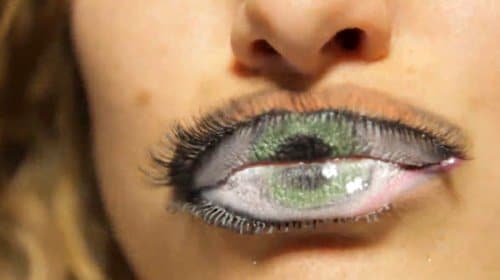 A mouth converted into an eye  – symbolizing MK slaves being “silenced” by the Illuminati system.

This video normalizing the plight of MK slaves was all filmed while Miley was “hospitalized” and bedridden, probable codes for “reprogramming”. This is how the entertainment business spreads its sickness to the entire world.

FacebookTwitterSubscribe
Related Topics:breakdownmiley cyrus
Up Next

The 2014 VMAs: All About Hypersexualization

What is Happening to Shia LaBeouf?