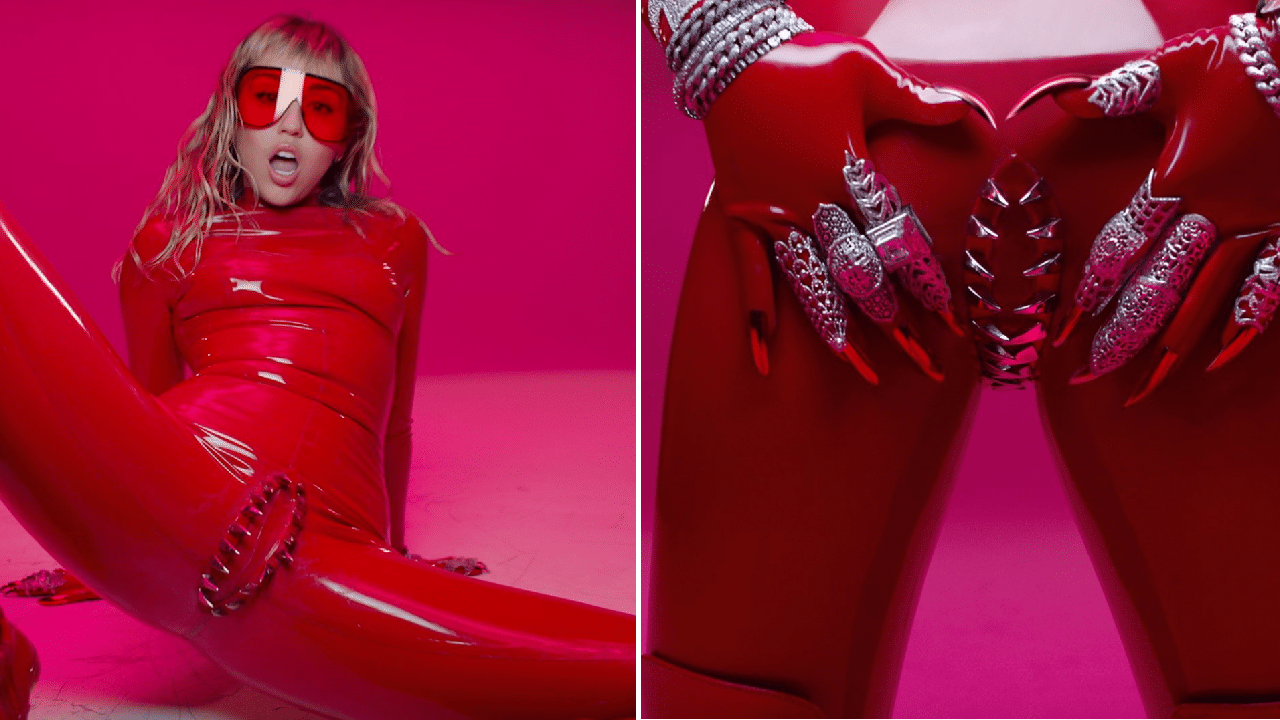 Miley Cyrus is what I call a “barometer artist”. That’s because her act invariably mirrors whatever agenda needs to be pushed by mass media at that particular moment. Indeed, Miley never had her own sound, her own image or her own message. Her entire act was always dictated by her handlers ever since she was a child playing the role of Hannah Montana.

Appropriately enough, Miley recently appeared in an episode of Black Mirror where she played the role of a mind-controlled pop star who has absolutely no control over her career and her message. While her character (named Ashley O) keeps talking about “empowerment” to her fans, she’s actually a heavily medicated slave who does as she’s told by her handlers.

Only a few weeks after the release of that Black Mirror episode, Miley Cyrus unleashes upon the world Mother’s Daughter – an NSFW music video loaded with a bunch of calculated messages aimed a young people. Indeed, the video is essentially an infomercial sponsored by powerful groups, lobbies, and think tanks to propagate specific social messages. 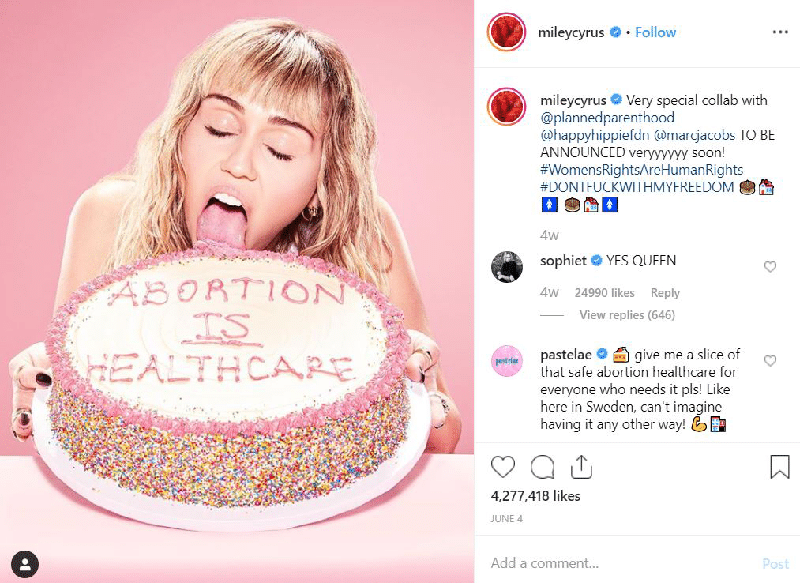 Shortly before the release of her video, Miley posted a photoshoot on Instagram made in collaboration with Planned Parenthood and the photographer Marc Jacobs. In this pic, Miley licks a cake that says “Abortion is Healthcare”. The fact that cakes are used to celebrate birthdays is rather disturbing.

According to media sources, Mother’s Daughter is “a statement made in support of gender equality, freedom and the fight against discrimination and sexual harassment”. Of course, the video was immediately praised by everyone in show business because that’s the agenda right now and nobody can oppose it. Abortions good. Genders bad.

However, there is more to this video than meets the eye. Let’s look at it.

The concept of the video is rather simple: Lots of guest appearances by activists and other people that support a specific agenda. At the center of it all: Miley Cyrus wearing a red latex suit which features a symbolic “accessory”.

Miley’s suit features a “vagina dentata” – teeth around female genitals. This ancient and archetypal symbol can be found in various cultures and is usually associated with cautionary folk tales about the dangers of copulation with the wrong women at the risk of harm and emasculation.

Beyond the folk tales, the dentata aptly represents an important aspect of today’s mass media agenda: The weaponization of feminity. It is about using “feminism” (a distorted version of it) for social engineering. It is about turning the female body (with all of its warm, receptive and nurturing qualities) against its own nature. It is about radicalizing sexes and breeding hatred between males and females. It is about turning the sad reality of abortion into some kind of feminist power move.

Throughout the video, lots of messages are flashed on screen. They all have a strange, Orwellian quality to them.

“Every woman is a riot” – the slogan of Ukrainian radical feminist activist group Femen.

A riot is “a form of civil disorder commonly characterized by a group lashing out in a violent public disturbance against authority, property or people.” Is every woman truly a riot? Of course not. Some women are warm, gentle and loving people who do not feel the need to be angry at everything. By trying to be “feminists”, these people actually reduce and generalize women to fit their own contrived vision.

This next message is worse. 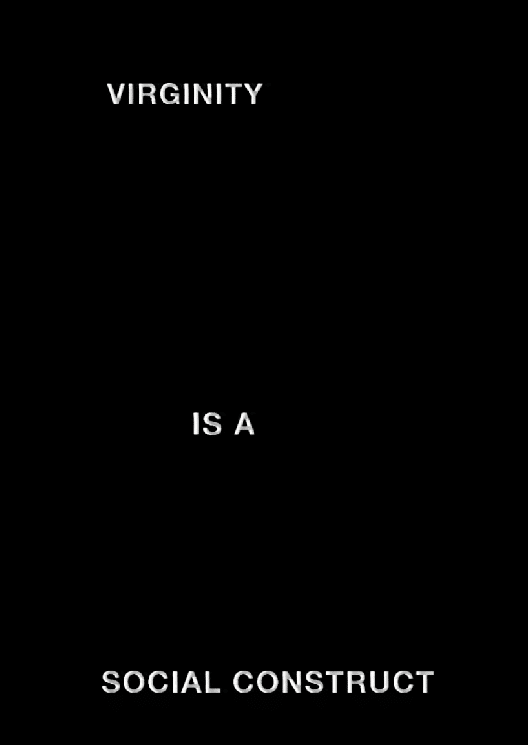 “Virginity is a social construct”.

The message is followed by a shot of a young girl.

According to Miley’s Instagram, this is an 11-year-old girl named Mari from Flint, Michigan.

So, let’s unpack “virginity is a social construct”. What does that even mean? As seen in past articles such as A Teen Vogue Video Says: “This Idea That the Body Is Either Male or Female is Totally Wrong”, there is a worrying trend in mass media that urges young people to deny verifiable facts to embrace a radical and extreme social agenda.

Here’s an excerpt from an article justifying this line of thinking:

“Virginity is not real. It’s a socially constructed phenomenon that functions to police our bodies and make us feel guilty about our sexual experience, (whether profuse or non-existent). It continuously puts power in the hands of heterosexual men, subjugates and takes power away from heterosexual women and denies the existence of non-het sexual bodies.”
– Lauren Forster, Why Virginity is a Social Construct

The fact that the video follows “virginity doesn’t exist” with a young girl is weird. Do they believe that children are not virgins?

The video then continues with more strange imagery. 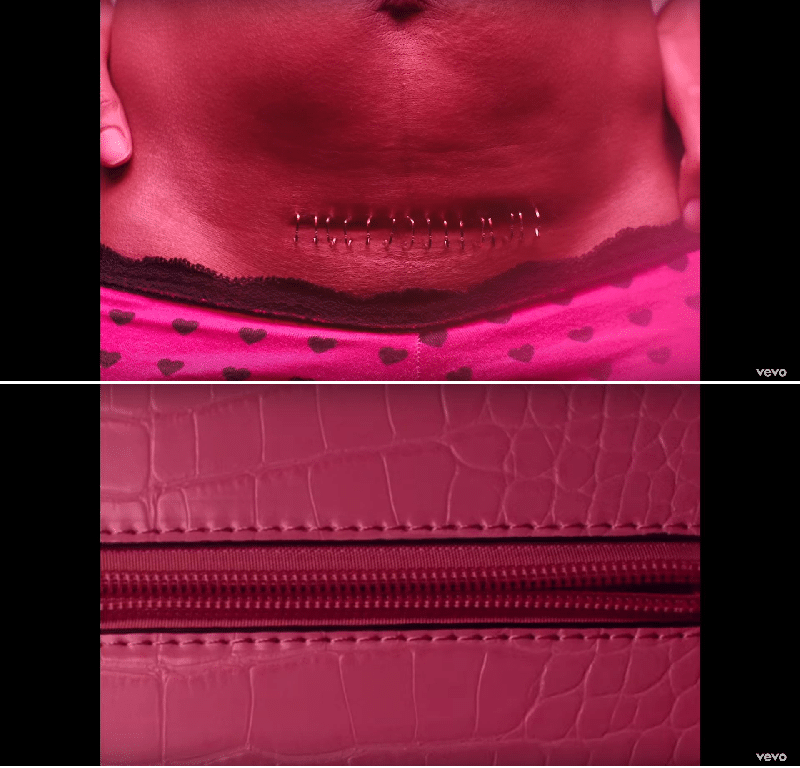 The stomach of a woman who had a c-section is compared to the zipper of a purse. That’s the kind of thing a psychopath would think about.

The next message in the video gets spiritual.

“Sin is in your eyes”. That’s the kind of thing a psychopath would say.

The lyrics of the song kind go in the same pseudo-satanic direction as the message above. The first verse goes as follows:

Hallelujah, I’m a freak, I’m a freak, hallelujah
Every day of the week, I’ma do ya like I want ya
I’m a Nile crocodile, a piranha

As you might know, hallelujah means “Praise the Lord” and is theologically the highest form of praise one can give to God. Combining this word with “I’m a freak” and “I’ma do ya” is basically a form of disrespect and blasphemy.

In the second verse, we start to understand what kind of psychopath would dream up these kinds of debasing messages.

As seen in my article The Sick, Twisted Messages in “Chilling Adventures of Sabrina”, there’s a clear and evident mass media push to associate witches with feminism.

Throughout the video, this chorus is repeated ad-nauseam:

Don’t f**k with my freedom
I came up to get me some
I’m nasty, I’m evil
Must be something in the water or that I’m my mother’s daughter

Speaking of witch (not a typo), Miley’s mother Tish Cyrus makes an appearance in the video.

Miley’s mother appears in the video on numerous occasions. Here, she wears a feline-print dress. In Monarch programming, feline prints are used to identify Beta Kitten slaves … and Miley Cyrus is a product of that system. Is this why Miley describes her mother as “vile and evil”?

The video also features other “guests”.

Aaron Phillips is described as a “black girl in a wheelchair who happens to be trans”.

Is this video celebrating “diversity” or exploiting it? As stated countless times in previous articles, everyone has the absolute right to live in whatever way that makes them happy and comfortable. But there’s a fine line between accepting people and hunting down the most “diverse” people and exploiting them in videos as if they were circus freaks for maximum virtue signaling points.

Here’s what probably happened behind the scenes:

– Guys. You won’t beleive this. I snagged the ultimate minority: Black, trans and in wheelchair!
– OMG, that’s amazing! All of the diversity boxes are checked! Get her in the video right now! And all over Miley’s Instagram! Whatta catch!

While clamoring “inclusivity”, videos like this one actually reduces people to attributes such as “trans” or “disabled”.

This final image sums up the entire video.

Does this image convey power? Or the exact opposite? Miley sits on a carousel horse that is meant to go around in circles. She wears fake studio props as an armor. Miley is not leading anyone anywhere. She’s a highly controlled pop star in a studio who is taking orders from a director (who is a white male, by the way).

The chorus might say “Don’t f*ck with my freedom”. However, those who own her never gave her any of it.

Mother’s Daughter is not art. It is propaganda and indoctrination. In only a few short minutes, this video manages to mix the occult elite’s obsession with abortions, gender-blurring, and satanism. Let’s not forget the fact that they believe that virginity is a “social construct”.

In the end, behind all of the virtue signaling and the buzzwords, this video actually celebrates only one thing: The corruption of everything that is pure and sacred.

FacebookTwitterSubscribe
Related Topics:featuredmiley cyrus
Up Next

Sabrina Carpenter’s “In My Bed”: A Video about the Mind Control of a Young Girl … Made by Disney

The Meaning of YG’s Video “In The Dark”: Is it About Blood Sacrifice?