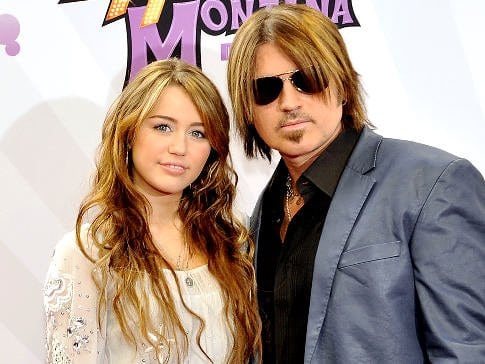 In this startling interview with GQ, Billy Ray Cyrus mentions Miley Cyrus’ “handlers”, his fears of seeing her dead like Anna Nicole Smith and Michael Jackson and the evil side of the industry.

Here’s the NY Daily News report on it:

Since condemning Miley Cyrus’ bong scandal in December, Billy Ray Cyrus hasn’t said much about his daughter or the controversies that keep surrounding her.

But in an interview conducted a mere five days after the video leaked, for GQ’s March issue, he comes out swinging.

Among the most startling revelations is an admission that “Hannah Montana” “destroyed” his family and his fear that 18-year-old Miley could possibly end up meeting the same tragic fate that befell controversial stars that came before her – namely, Michael Jackson, Kurt Cobain and Anna Nicole Smith.

“Every time something happened in Miley’s career, every time the train went off the track, if you will – Vanity Fair, pole-dancing, whatever scandal it was – her people, or as they say in today’s news, her handlers, every time they’d put me … ‘Somebody’s shooting at Miley! Put the old man up there!'” Billy Ray told the magazine about why he used to have such a strong public presence in his daughter’s life.

Now the 49-year-old father of six said he realized “they used me every time.” And he eventually reached his breaking point, choosing not to attend the starlet’s 18th birthday party last year.

“You know why I didn’t go? Because they were having it in a bar,” he explained. “It was wrong. It was for 21-years-old and up. Once again all them people, they all wanted me to fly out so that then when all the bad press came they could say, ‘Daddy endorsed this stuff … ‘”

“If I would have went out there I would have been right in the middle of all this stuff that’s going on right now with the bong. They’d be hanging it on my ass,” Billy Ray continued. “I had the common sense … I said, ‘This whole thing’s falling apart up there and they just want to blame all of this stuff on you again.’ I’m staying out of it.”

Billy Ray, who is in the process of divorcing Miley’s mom Tish, said he knew something was especially wrong in the days before the video of the teen star smoking salvia from a bong hit the web.

He explained to the magazine that he had heard her “handlers” were concerned about a missing iPhone and bartering with the people who obtained it.

“And that was on the heels, the week previous, of some pictures from Spain [which showed Miley drinking a beer] – a five- or seven-day period of just boom!” he recalled. “There’s a train wreck happening and my daughter’s right in the middle of it.”

Since he didn’t know what was on the missing phone, Billy Ray said he tried to find out through Miley’s team.

“They told me it was none of my business,” he claimed. “I’m dealing with somebody that had only known my daughter for possibly four years and I’m her daddy. I was pretty damn insulted.”

“And I took that as the ultimate alarm,” he continued. “‘It’s none of your business’! None of my business that you’re out running around L.A. trying to buy kids’ computers and phones because there’s something about my daughter?”

In her own recent interview with Marie Claire, Miley apologized for disappointing her fans with the drug incident, but also noted that it’s “normal” to be “imperfect” at her age.

Billy Ray made a similar concession in the GQ interview, admitting, “There’s no doubt I did stuff when I was a teenager that I’m sure could have turned out horribly.”

“I’ve done some stupid crap – I do stupid crap. We all do. But it’s different when you sit back and you see it happening to your little girl,” he explained. “I feel like I got to try. It’s my daughter”

“And,” Billy Ray added, “some of these handlers are perhaps more interested in handling Miley’s money than her safety and her career,” something that leaves him “scared for her.”

Billy Ray went on to discuss how fame ultimately cut short the lives of Jackson, Cobain and Smith, which has made him all the more eager to help his daughter navigate through life in the spotlight.

When he looks back on Miley’s rapid rise to fame through “Hannah Montana,” on which they both starred, he said he sees how “the business was driving a wedge between us.”

“I’d take it back in a second. For my family to be here and just be everybody okay, safe and sound and happy and normal, would have been fantastic. Heck, yeah,” he said.
“I’d erase it all in a second if I could.”

And for those who believe Billy Ray’s concern is really about whether his daughter will continue to be a cash cow, he offered to set the record straight.

“I’ve never made a dime off of Miley,” he insisted. “You got a lot of people have made percentages off of her. I’m proud to say to this day I’ve never made one commissioned dollar, or dime, off of my daughter.”

Billy Ray didn’t place all the blame on those currently in Miley’s life. There are also evil forces at work, he claimed.

“Somewhere along this journey, both mine and Miley’s faith has been shaken,” he said. “That saddens me the most.”

His family, Billy Ray argued, is now being ruined by Satan.

And Billy Ray also held himself partially responsible for his daughter’s behavior.

“How many interviews did I give and say, ‘You know what’s important between me and Miley is I try to be a friend to my kids’? I said it a lot,” he admitted. “And sometimes I would even read other parents might say, ‘You don’t need to be a friend, you need to be a parent.’ Well, I’m the first guy to say to them right now: You were right.”

“I should have been a better parent. I should have said, ‘Enough is enough – it’s getting dangerous and somebody’s going to get hurt,'” he continued. “I should have, but I didn’t. Honestly, I didn’t know the ball was out of bounds until it was way up in the stands somewhere.”

Michael Jackson and Anna Nicole Smith were mentioned in the article  When Insiders Expose the Ugly Side of the Entertainment Industry.