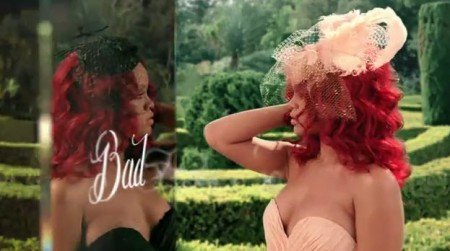 Rihanna is first shown lying inside a flower, representing purity and innocence. She is then walks towards a mirror reflecting herself dressed in black – representing her “bad side” and her alter persona.

While she is going through the “looking glass” (reference to Alice in Wonderland), we see written “Bad Feels so Good”.

In mind control, slaves are encouraged to embrace their bad side (their alter persona) as it is the only way to be relieved from their trauma/torture. So, yes, it feels bad to be good.

Once through the looking glass, Rihanna is shown walking through a maze surrounded by fractured mirrors. 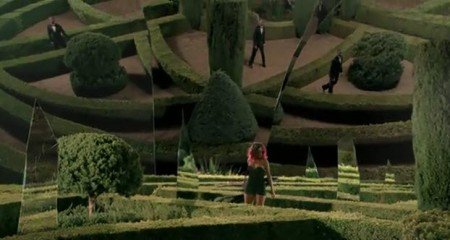 Labyrinths and fractured mirrors are mind control triggers representing the internal world of mind control victims: false reality, illusion and confusion. Only the handler, represented by the men in black, hold the key to their psyche.

Rihanna’s handlers are literally in her head, watching her going through the maze. They then take a hold of her. 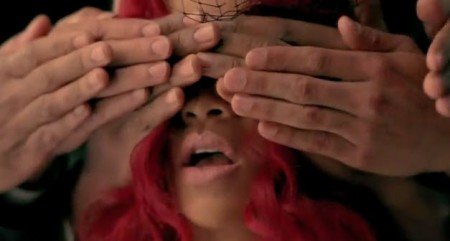 Rihanna blinded by her three handlers

The scene becomes oddly sexual as Rihanna holds the phallic-shaped perfume bottle while she is blinded by her handlers. This refers to the sexually abusive relationship between mind control slaves and their handlers.

The entire ad then plays in reverse, another allusion to the reversal of good and bad. As she goes through the looking glass again, we see “Good Feels so Bad”.

Billy Ray Cyrus in GQ: My family is under attack by Satan, I’m ‘scared for’ daughter Miley