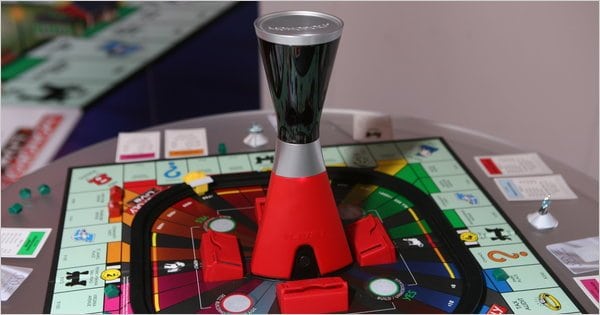 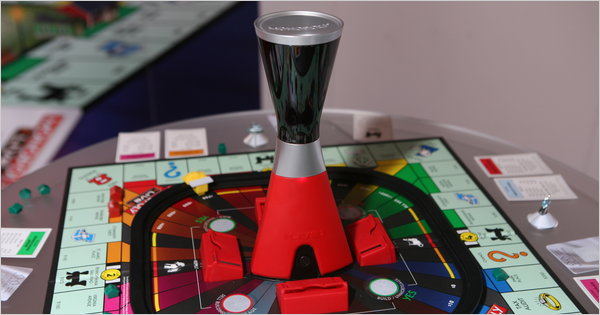 The new version of Monopoly features an ominous computer tower which monitors your moves, counts your money, rolls the dice for you and tells you what to do…Sounds fun!

Jeopardy isn’t the only game being threatened by computer domination.

A new version of board game staple Monopoly will ditch the dice and paper money in exchange for an ominous computer tower that monitors player activity. Hasbro unveiled the product –somewhat ironically dubbed “Monopoly Live” — at this week’s Toy Fair in New York, reports The New York Times.

The ten-inch tower sits in the middle of the game board, using infrared technology to keep track of the action while barking out instructions to players. Move one too many spaces? The all-seeing eye computer tower will know. It even rolls the (virtual) dice for you.

Thankfully, the core element of the Monopoly board — the location of properties — has remained unchanged, so you can still set up your favorite hotel chains, land on free parking and scoop up dough by passing “Go.” But say goodbye to that brightly colored Monopoly money and those Community Chest and Chance cards — if it’s made of paper, it’s pretty much gone. Instead, players will buy and sell properties by holding their hands over special decals and will check their accounts by inserting ATM cards into the tower.

The Big Brother-like move is intended to revive interest in the dwindling board game market.

“How do we give them the video game and the board game with the social experience? That’s where Monopoly Live came in,” Jane Ritson-Parsons, global brand leader for Monopoly, told the Times.

The newfangled Monopoly is sure to have detractors, however. Players have long considered the basic Monopoly rules to be more a set of loose guidelines, and have traditionally livened things up by encouraging sneakier tactics like hiding money and making deals with other players on the fly. With the tower overseeing every move, such casual cheating will be a thing of the past.

With Monopoly Live, Hasbro is hoping to appeal to younger players more accustomed to the fast-paced world of digital downloads and bite-sized game apps (the biggest of which, Angry Birds, will be getting the board game treatment later this year.) It’s planned to be a shorter, quicker experience that doesn’t require thumbing through an instruction manual, and will even include random mini-games — such as a horse race or sudden property auction — to break up the game’s oft-criticized monotony.

The game goes on sale this fall for $50. Other Hasbro franchises will receive a similar upgrade in the future, with Battleship going under the hi-tech knife later this year.

Billy Ray Cyrus in GQ: My family is under attack by Satan, I’m ‘scared for’ daughter Miley