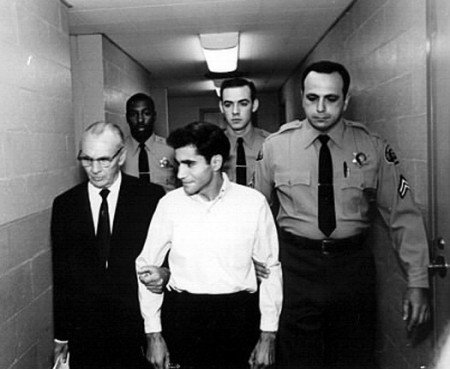 In the article Roman Polanski’s “Rosemary’s Baby” and the Dark Side of Hollywood, Charles Manson, “Son of Sam” and Mark David Chapman (John Lennon’s killer) were linked to Monarch mind control. Sirhan Sirhan is however probably the most obvious MK patsy to be accused of a high profile killing. In a rare admission of the existence of mind control in mass media, The Telegraph published today an article on him being a “Manchurian Candidate” .

Robert F. Kennedy’s assassin was programmed to shoot the politician in a real life version of the film The Manchurian Candidate, according to his lawyer ahead of a parole hearing on Wednesday.

In June 1968, Sirhan Sirhan shot Kennedy dead in the kitchen of the Ambassador Hotel in Los Angeles, moments after he had clinched victory in the California Democratic primary for that year’s presidential election.

Sirhan, a 24-year-old Palestinian, cried “I did it for my country” when arrested. He kept diaries detailing his hatred of Kennedy for promising military support for Israel, a year after the region’s Six-Day War.

Yet Sirhan’s lawyer claims he was programmed to shoot the politician while under hypnosis.

Bill Pepper, the New York attorney who will today lead Sirhan’s 14th attempt to be given parole, improbably alleges his client was “hypno-programmed”.

“Sirhan was put through a process involving hypnosis and chemicals,” claimed Mr Pepper, who is also a qualified barrister in England and Wales.

“Someone, some group or some agency did this,” he said. Asked if he meant that the US government was responsible, Mr Pepper said: “Perhaps”.

Despite the fact his client was watched and apprehended by numerous bystanders, Mr Pepper also believes the conspiracy theory that there was a “second gunman” in the hotel.

“We know Sirhan did not shoot the lethal bullets,” he told The Daily Telegraph. “Witnesses said he was standing in the wrong place. He was there only as a distraction.”

The lawyer may be prevented from making these arguments before the parole hearing, in Coalinga, California. At issue is whether his client, now 66, remains a threat and has accepted responsibility.

In addition to maintaining that he did not even kill Kennedy, both Sirhan and Mr Pepper also say that he has “no recollection” of the incident.

Mr Pepper, who was chairman of Kennedy’s “citizens’ committee” in 1964, said he was hopeful ahead of the hearing.

But David Dahle, an LA district attorney on the panel, suggested Sirhan would be disappointed again. “I am sceptical that I will see something that will cause me to not oppose the grant of parole,” he said.