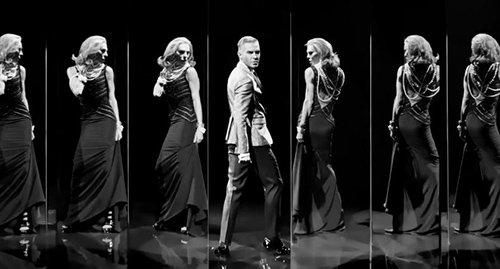 Dsquared2 is an international fashion house founded by identical twin brothers Dean and Dan Caten. Their creations are worn by celebrities such as Britney Spears, Madonna, Rihanna, Christina Aguilera, Fergie, Justin Timberlake, 50 Cent and Bill Kaulitz. To promote their Spring-Summer collection, Dsquared2 released a fashion video that contains a bunch of images and symbols relating to Monarch mind control. This is not suprizing as many “fashion videos” are completely riddled with MK Symbolism (another blatant example is this Versace ad for H&M).

The entire video is based on the concepts of alter personas and the blurring of reality and illusion through confusing reflections. Both of these concepts are directly related to Mind Control. 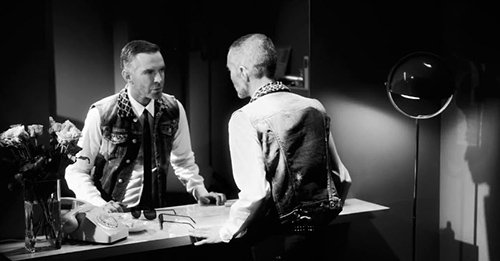 In the first scene, one of the brothers look at himself in the mirror (is his twin brother looking back at him?). The animal print collar appears to be a subtle reference to Kitten Programming).

Then appears an alter-persona dressed in drag. This happens amidst a whole lot of mirrors and reflections, blurring the line between reality and illusion. This exact imagery was used in other MK-themed pieces described on this site: Beyonce’s Superbowl performance and Will.I.Am’s “Scream and Shout”. 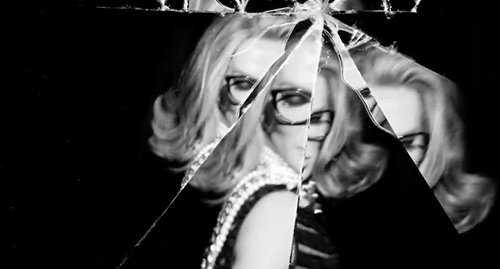 As the mixing of reality and illusion increases, things get more intense. Then, as it is the case in almost EVERY SINGLE MK-themed piece in history, we see a mirror cracking – representing the fragmentation of the slave’s personality. Yes, a mirror also cracked in Beyonce’s performance and many other videos described on this site. 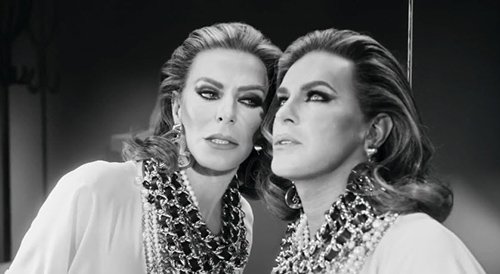 Once the mirror cracked (and the personality fragmented), the transformation of the guy into a female alter persona is complete. Here, the mirror reflection looks right at the alter, hinting that this creation is completely independent from the core persona. This use of mirrors is so original and groundbreaking!…Wait, no…

A scene from the movie Black Swan. The movie contains a lot of the same elements (read the article about it here)

In short, this promotional video recycles several symbols referring to Mind Control used in popular culture. Under the guise of being “artistic”, this video rehashes and perpetuates the symbolism associated with MK-ULTRA. It is yet another proof that the fashion world is completely drenched in the terrible world of Monarch Programming…And did you see that fabulous hat?!

Taylor Swift at the Brit Awards: Yet Another Illuminati Ritual for the Masses