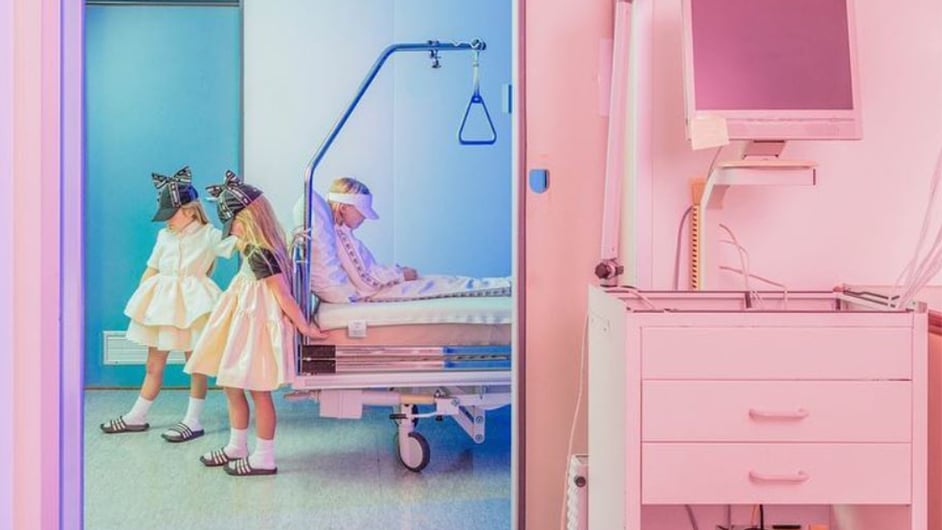 Caroline Bosmans is a luxury brand for children that is highly praised in its native Belgium and around the fashion world. Popular amongst the children of the rich and famous (i.e. P. Diddy), the brand is described as “radical and graphic” by fashionistas. Indeed, although Caroline Bosmans creates garments for toddlers and children, it is all about being edgy and fashion-forward.

However, there’s a problem. The world of fashion is sick and twisted. Adding children to the mix is often a recipe for “what the hell is wrong with them”. A prime example is the children’s brand NUNUNU which, as seen in my article Something Is Terribly Wrong With Céline Dion’s “Genderless” Clothing Line, is simply revolting: References to child abuse, the sexualization of children and even all-out satanism.

Sadly, the marketing around Caroline Bosman sends out the same disturbing vibes. Nearly all of the pictures place children in bizarre, oppressive and unpleasant contexts in which lots of telling symbolism is added. Adding to the bad vibes, all of the children in their promotional pics appear to be either sad, upset, traumatized or … dead. In short, the brand is a reflection of the occult elite’s sickening sub-culture of preying on children.

Here are some examples.

Visitors to the official website of the brand are greeted with a bunch of pics that sum up the brand: Mixing children with the weirdness of the fashion world. 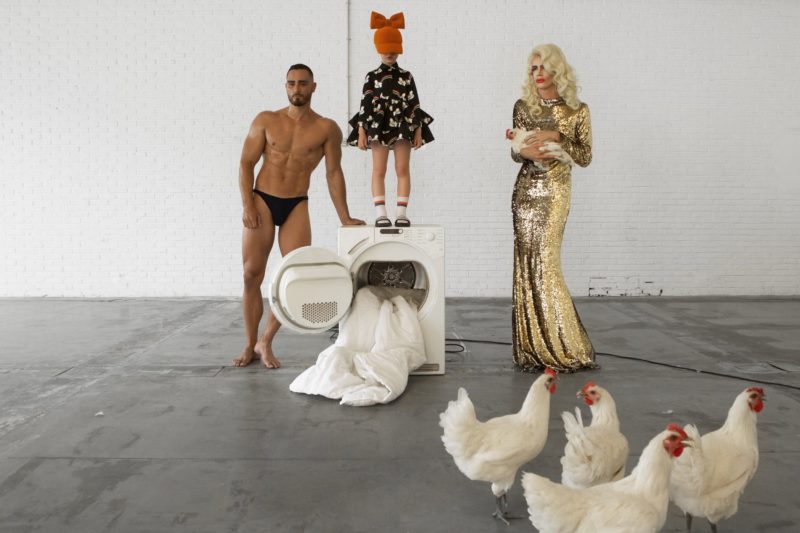 Welcome to the wonderful world of Caroline Bosmans. 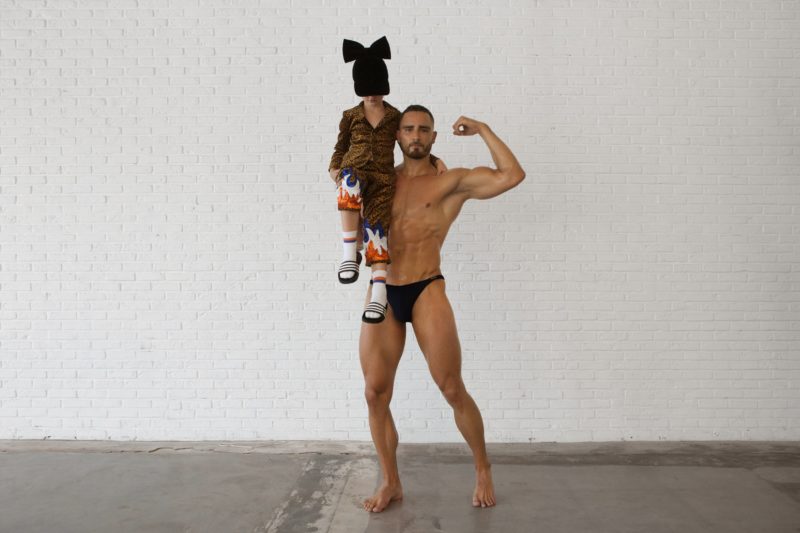 The child is held by an oily guy wearing nothing but a Speedo. 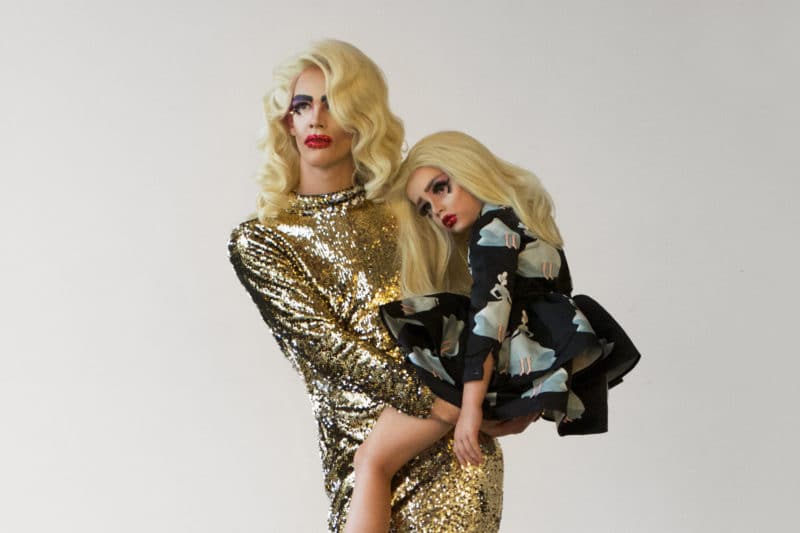 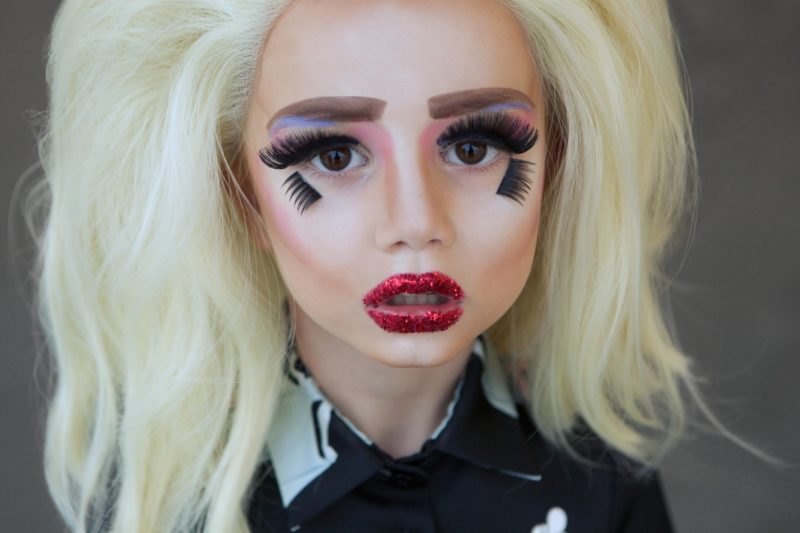 A favorite pastime of the elite is dressing up children as “sexy”, fully grown women (see my article about Desmond Is Amazing). 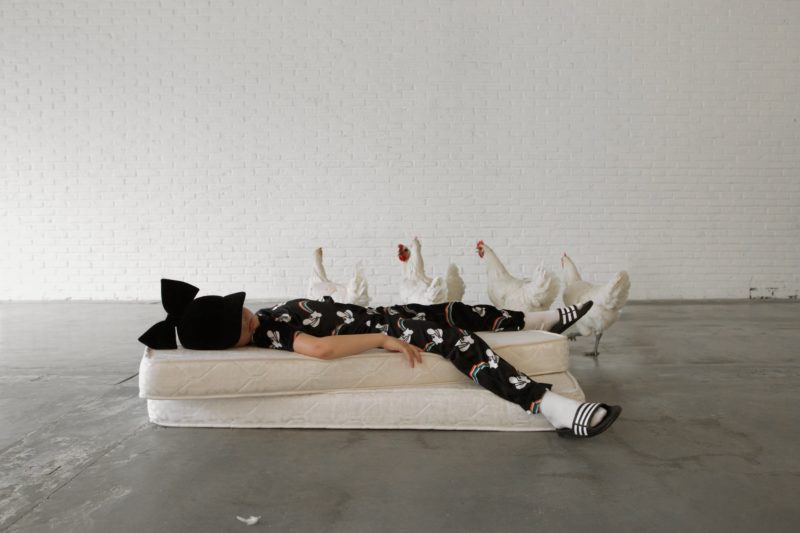 That doesn’t look like a safe and nurturing environment for a child. 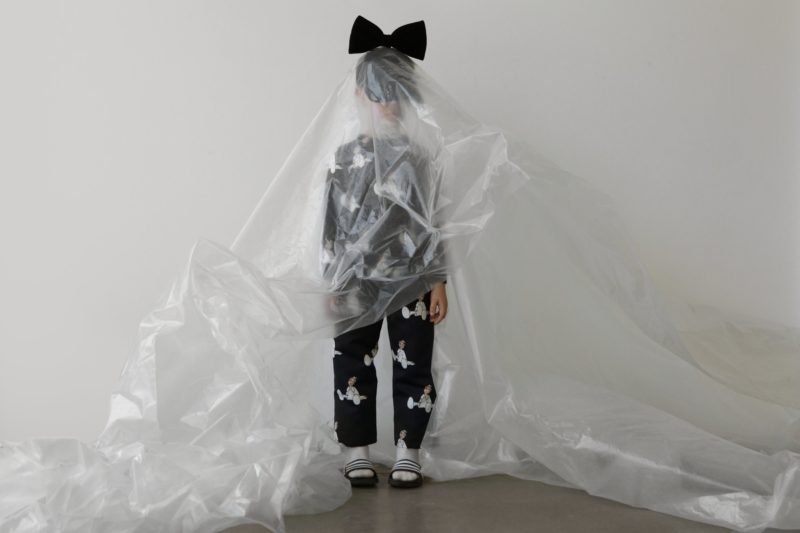 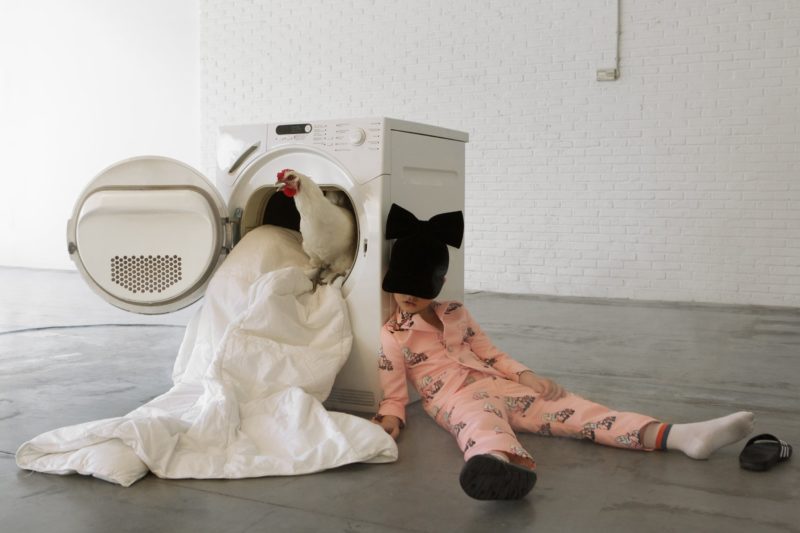 The brand loves pics of children who look asleep … or drugged … or dead. 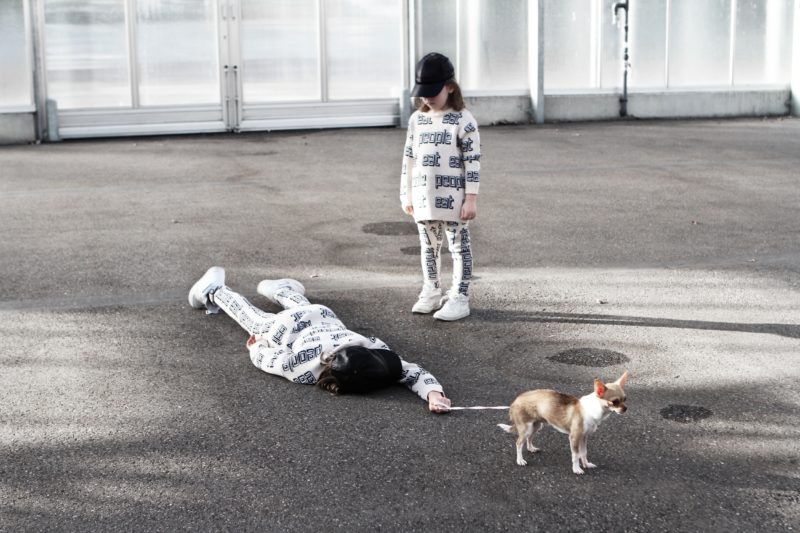 Another pic of a child that looks dead. On the children’s shirts and pants are the words “Eat People”. The elite is obssessed with cannibalism. 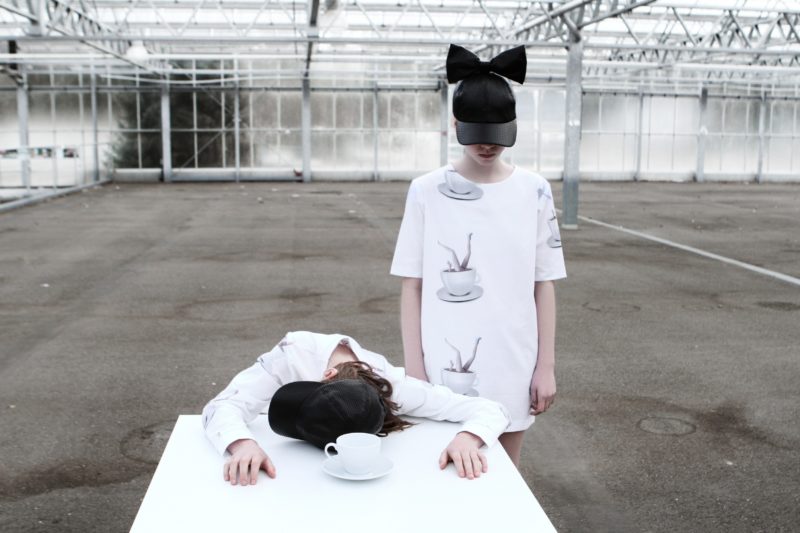 Yet another pic of a child that looks dead. Was there poison in that cup? The shirts depict a naked Barbie doll that face down inside a cup. Everything here alludes to abuse and the loss of innocence.

The website has a section named “Artwork” where children are used as props in strange setups. 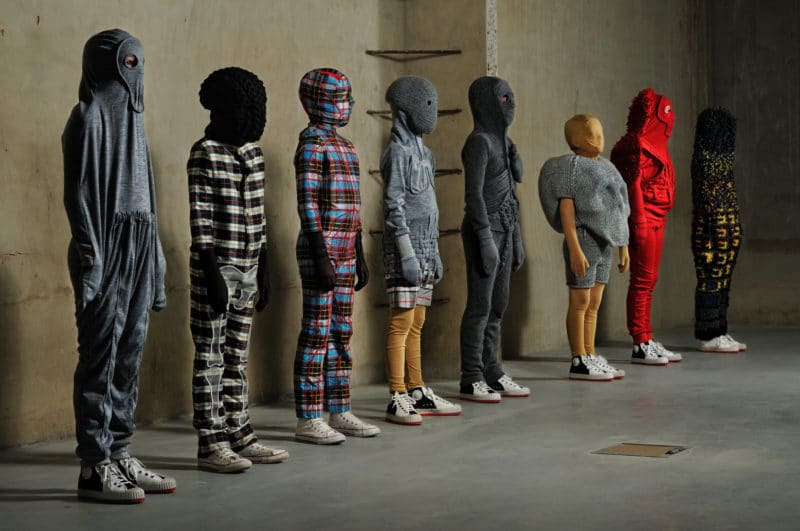 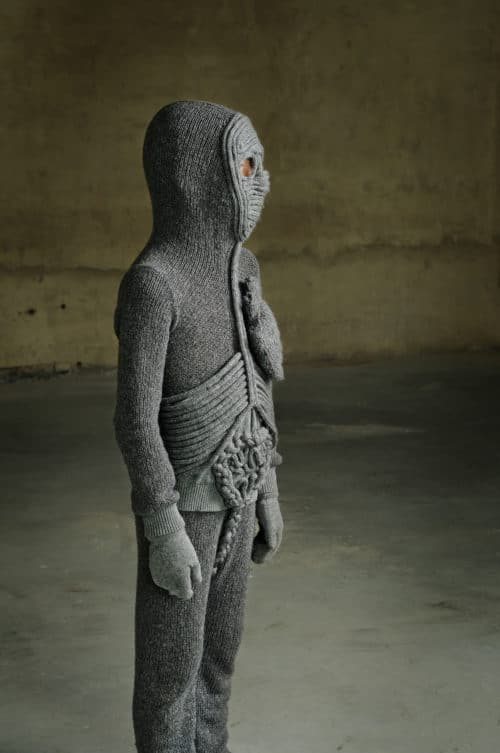 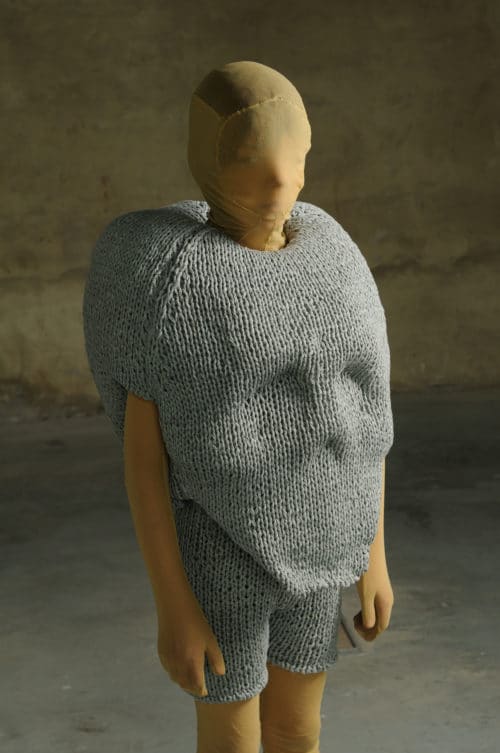 Face covered (depersonalization and objectification) and a gigantic skull (symbol of death). 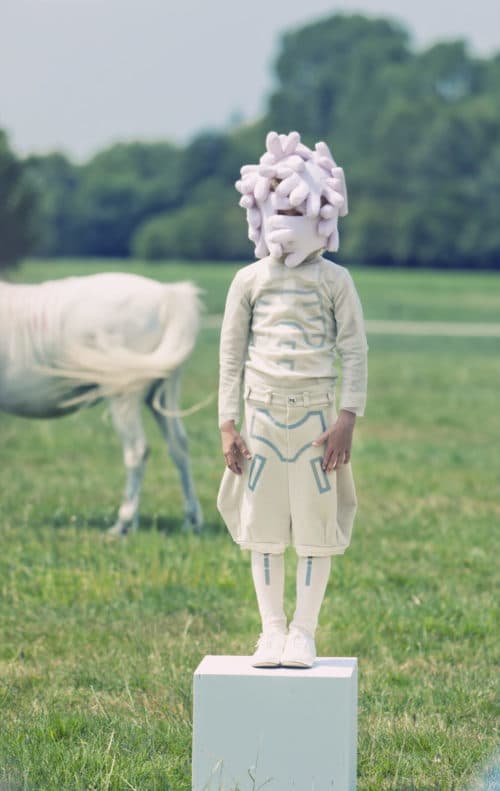 This child’s entire head is covered with hands. They love putting their hands on kids. 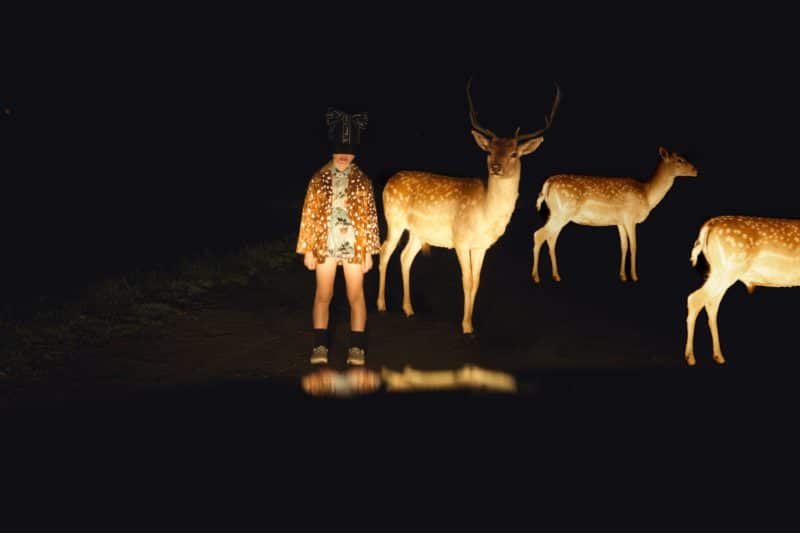 That doesn’t seem like a fun situation for a child to be in.

The kid on the right wears a dress saying “I’m pretty confused”. Also, there’s an eye (the occult elites favorite symbol) with a teardrop. This is all about abuse. 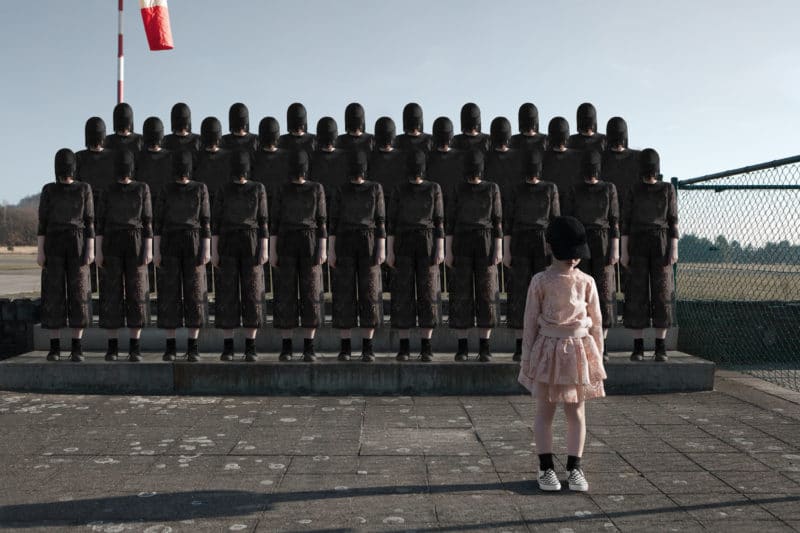 An army of cloned kids? Why?

Not unlike NUNUNU, scrolling down the Instagram account of Caroline Bosman leads to an increasingly intense feeling of dread and disgust. Here are some examples. 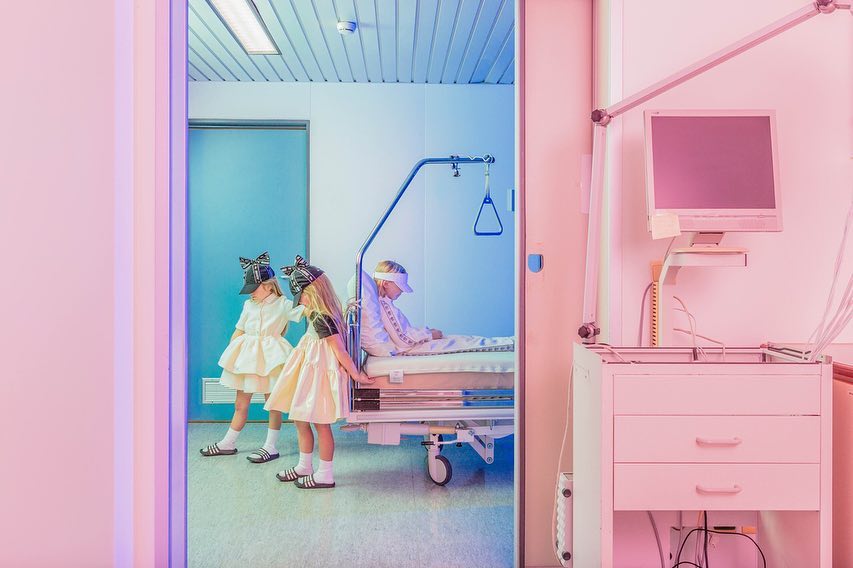 The IG account contains a fashion shoot of children in a hospital. This is wrong on so many levels. 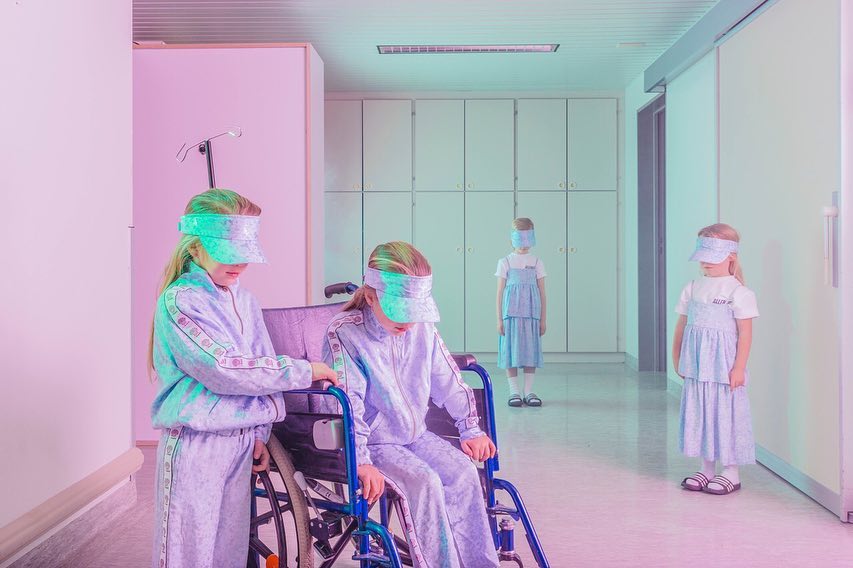 Children go to hospitals when they’re sick or suffering. They don’t want to be there. This brand uses this upsetting context to sell overpriced clothes. 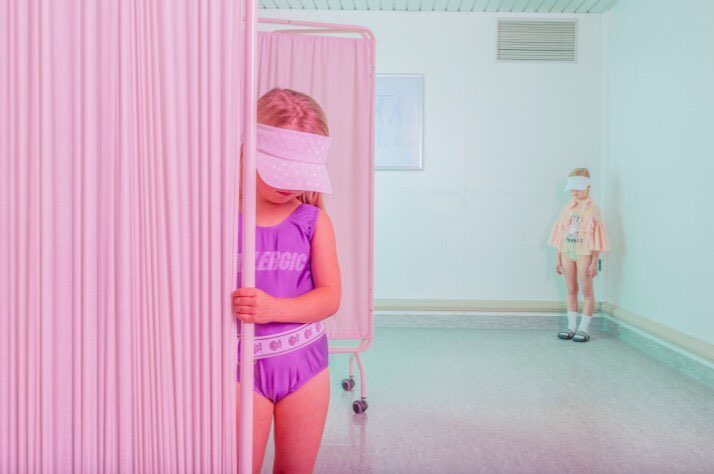 Why is she wearing this at a hospital? 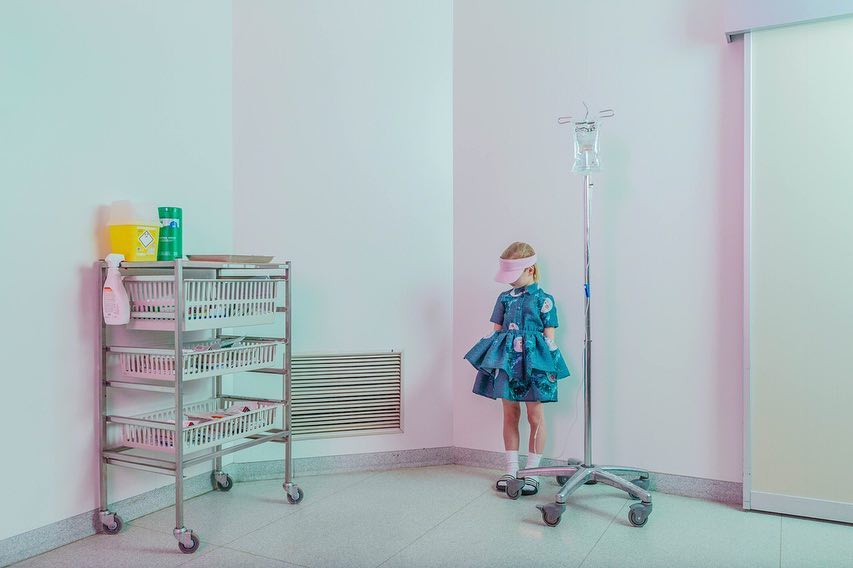 Get this girl out of here. While it is utterly perplexing, the fashion shoot is perfectly in line with the overarching theme of traumatizing children.

This pic is not even a fashion shoot. It’s an actual child in a hospital with the hashtags #alwaysfunwiththiskid and #bruisednotbroken. There’s a coldness here that’s extremely creepy.

#Readytoafterparty? Some weirdo posted in the comments “I’d like to join her ;)”. What’s up with wink weirdo? Then Caroline Bosman replies “But first some cocktails!” Huh?

For some reason, they decided to face swap a kid with a Ken doll. Symbolic. And what the hell is in the kid’s mouth? 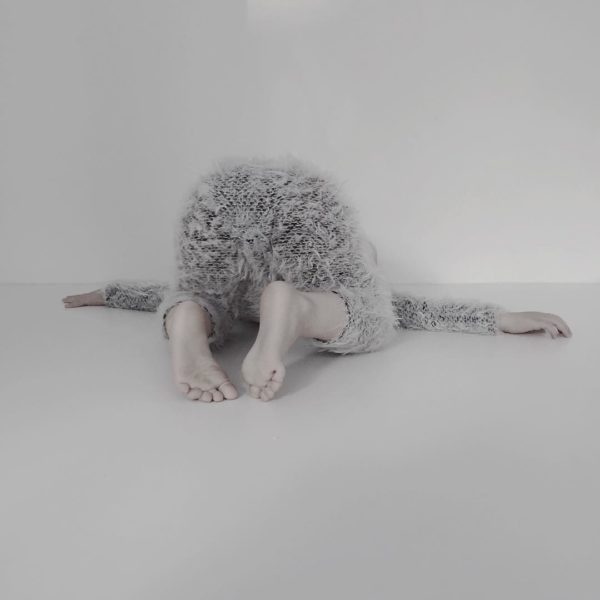 There’s a bunch of pictures of kids in this position. Why? Some weirdo posted as a comment “Bottoms up”.

Here’s another example. And there are many more. Some people in the comments appear to be extremely excited about these pics. 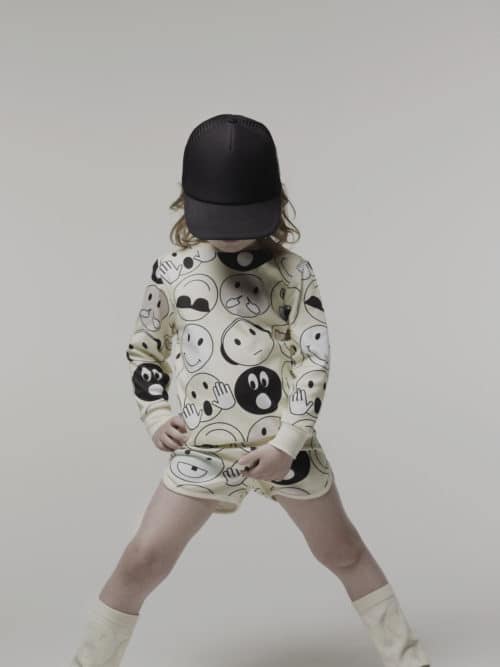 Is this kid holding his/her peepee? Who told them to do that? Why? 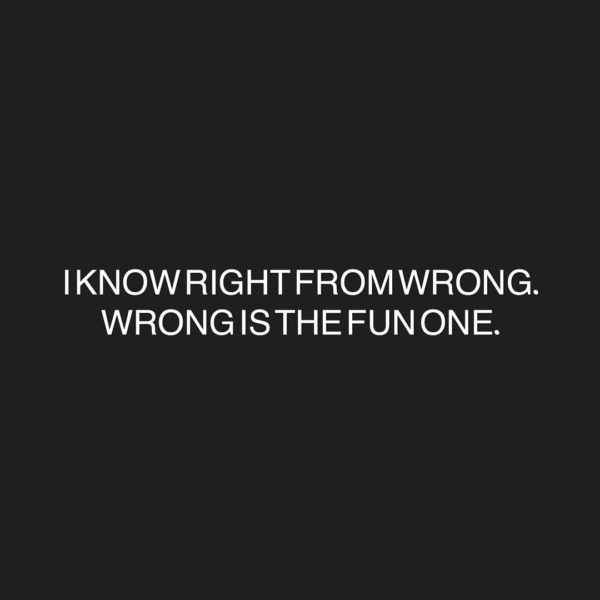 Combined with these upsetting pictures of children are sentences like this one. 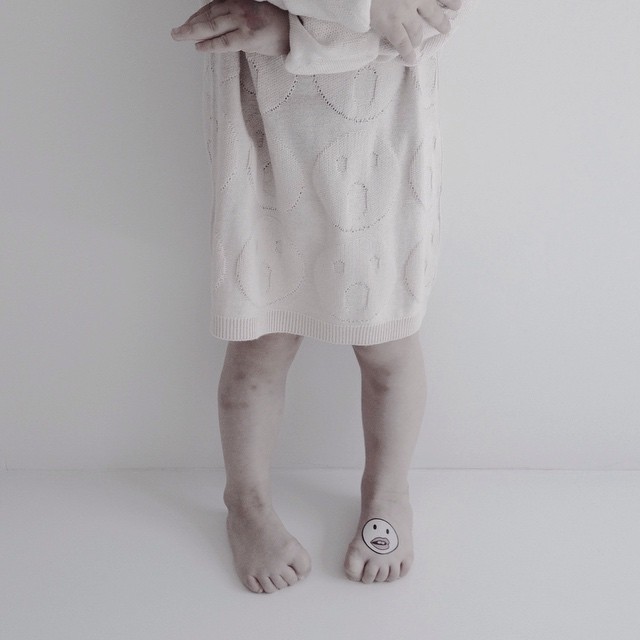 The legs of this kid appear to be bruised. Also, there’s a sticker of the brand’s logo. Weird. 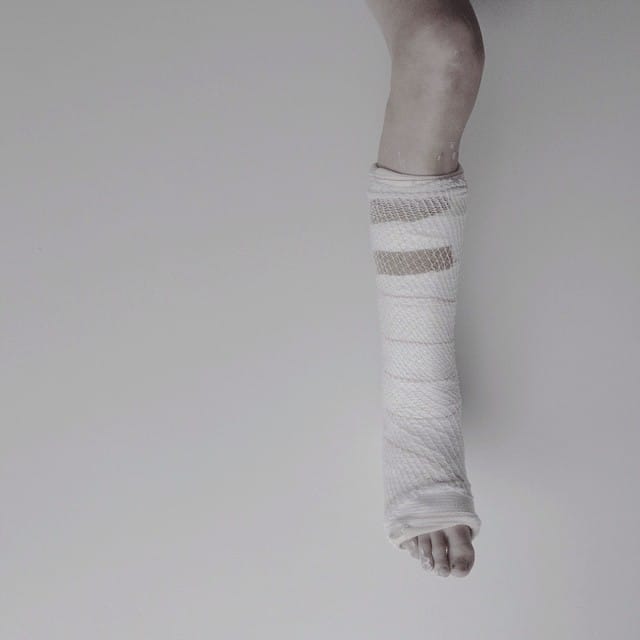 There’s an unhealthy fixation on children being hurt. 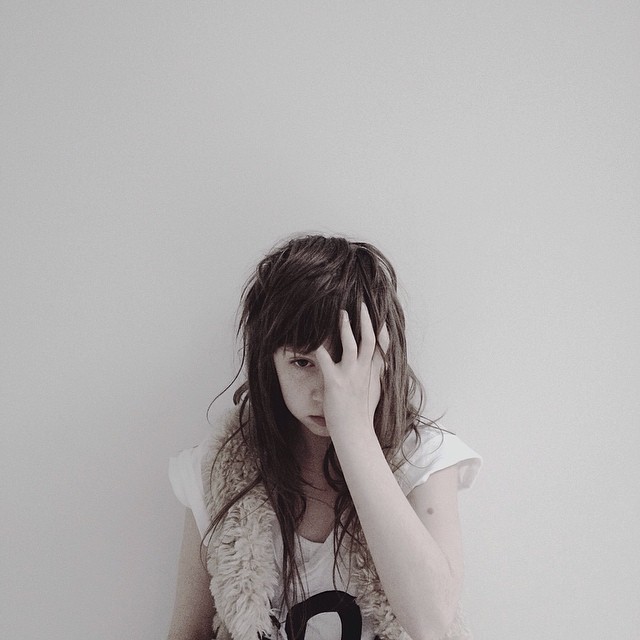 Of course, to prove that this is all part of the elite agenda, there’s a bunch of one-eye signs in there. 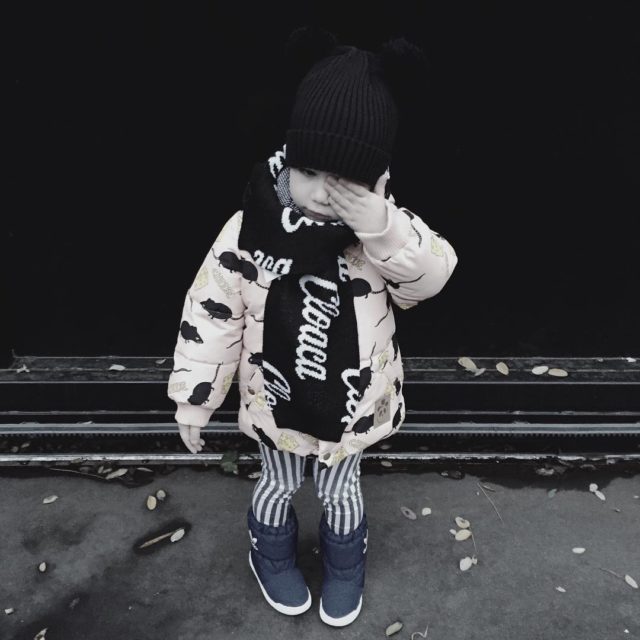 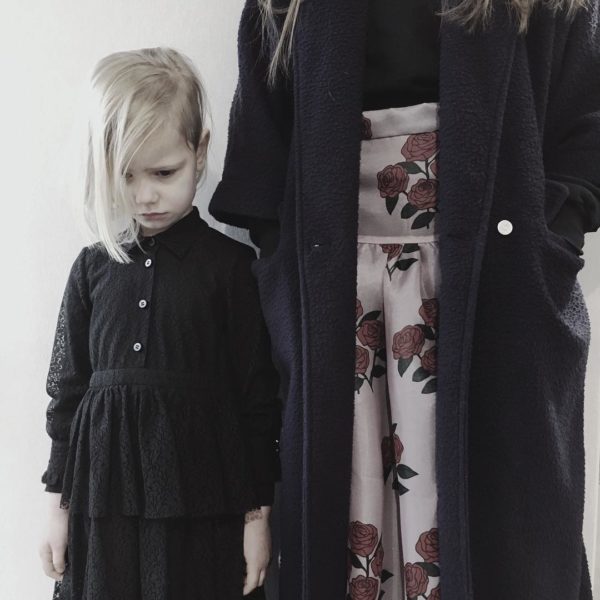 All of the children look absolutely miserable in these pics.

Caroline Bosmans is yet another “luxury” clothing brand for children that mixes high fashion with a disturbing sub-culture that obsesses on children for all of the wrong reasons. It is all about preying on children, placing them in traumatizing situations, alluding to their abuse and sexualizing them.

What is the purpose of such revolting imagery? Does it actually help sell products or is there a deeper agenda behind this? If one combines the imagery of this brand with what was observed with NUNUNU, a clear pattern emerges. It is not about the love of children, it is about hate. It is about using and abusing them. It is about evil.

On a wider scale, it is about the occult elite abducting children, subjecting them to trauma-based mind control and placing them in pedophile rings. The symbolism of these brands is a celebration of this sick culture. And celebrities are quite happy throwing their money at them.