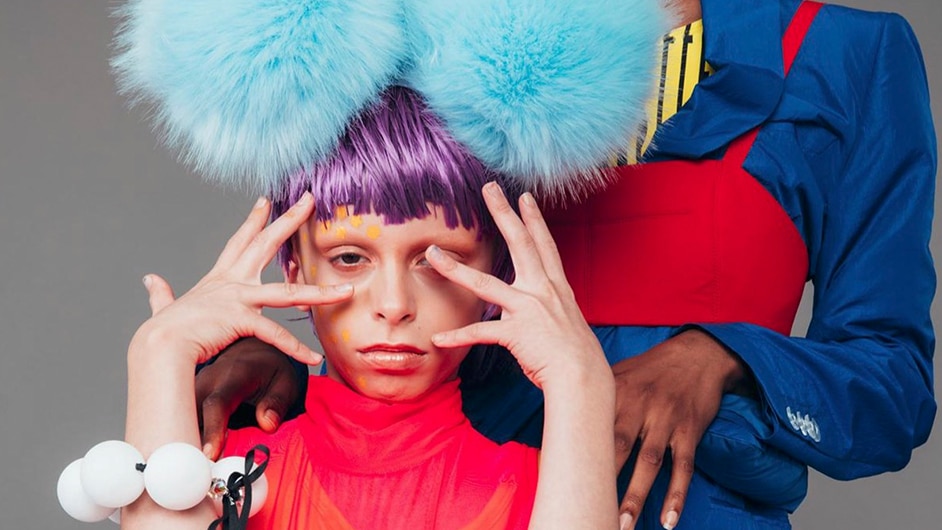 Desmond Napoles (aka Desmond is Amazing) is an 11-year-old drag performer who rose to fame due to his appearances on national television, fashion magazines and LGBTQ-related events. He became an instant media darling when a video of him dancing at a gay pride parade became viral. 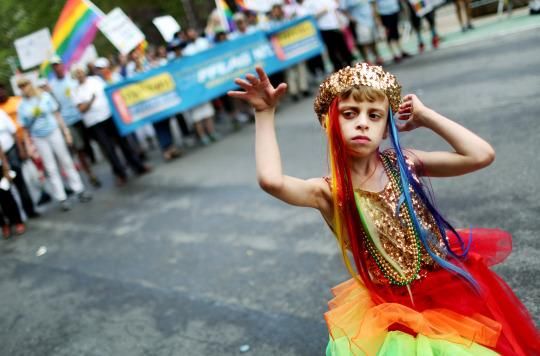 Desmond dancing at a gay pride parade at age 8.

However, despite these lofty titles, many consider Desmond’s entire act to be little more than child abuse and exploitation by unscrupulous adult handlers. The controversy surrounding Desmond reached another level when a video of him dancing at a gay bar for tips surfaced online, sparking a bitter debate online and in the media.

At the center of it all is an 11-year-old child who has been exposed to the world of drag since he was a toddler.

Napoles identifies as gay and states that he has been out since a very early age. Napoles’s parents stated that at the age of two or three, they understood that he was “likely gay” and they exposed him to a variety of gay culture, including showing him drag performances and taking him to pride parades. Napoles’s parents stated that he was “openly gay” when he entered kindergarten. Napoles’s mother reports that he began gravitating towards drag performances when he was two and watched RuPaul’s Drag Race. According to Napoles’ parents, Napoles is on the autism spectrum and his drag activity helps him relieve symptoms of autism disorder.
– Wikipedia, Desmond Napoles

Is Desmond “expressing himself” or is he being exploited? A look his “career” provides the answers. Here are some examples.

On December 25th 2017, Desmond appeared in a YouTube video with Michael Alig – the founder and ringleader of the Club Kids, a group of young New York City clubgoers that became a cultural phenomenon during the late 1980s and early 1990s. 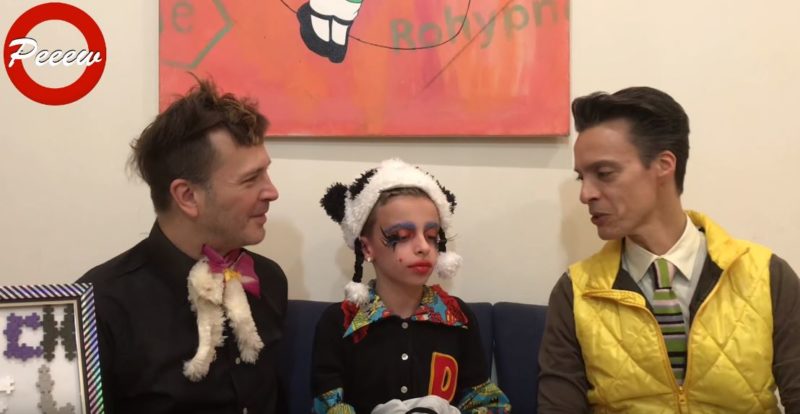 A screenshot from the YouTube video featuring Desmond with Michael Calig (left) and Ernie Glam (right). On the painting behind them: A child and the word Rohypnol – the name of a “date rape” drug.

Most people know Michael Alig for a darker reason: The gruesome murder of Angel Melendez in 1996 for which he served 17 years in prison for manslaughter.

On the night of March 17, 1996, Alig and his roommate, Robert D. “Freeze” Riggs, murdered Melendez after an argument in Alig’s apartment over many things, including a long-standing drug debt. Alig has claimed many times that he was so high on drugs that his memory of the events is unclear.

According to Riggs, he hit Melendez a total of three times on the head with the hammer. Then Alig grabbed a pillow and tried to smother him. While Melendez was unconscious, Riggs went to the other room; when he returned, he noticed a broken syringe on the floor. Riggs claimed that Alig was pouring “some cleaner or chemical” into Melendez’ mouth, then duct-taped it with the help of Riggs.

After Melendez’s death, Alig and Riggs did not know what to do with the body. They initially left it in the bathtub, which they filled with ice. After a few days, the body began to decompose and became malodorous. After discussing what to do with Melendez’s body and who should do it, Riggs went to Macy’s to buy knives and a box. In exchange for 10 bags of heroin, Alig agreed to dismember Melendez’s body. He cut the legs off, put them in a garbage bag, cut off the head and put it in another bag, and stuffed the rest into a box. Afterwards, he and Riggs threw the box into the Hudson River.
– Wikipedia, Michael Alig 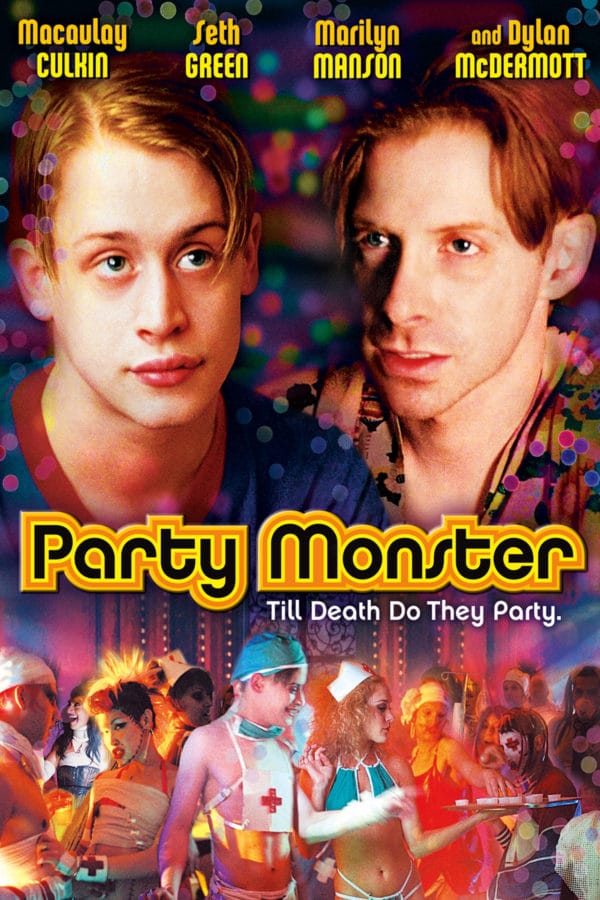 Alig was released from jail in 2014. Three years later, he was arrested for trespassing and smoking crystal meth outside the Bronx Supreme Court in February 2017. A few months later, Desmond sits next to him filming this video.

2018 was a big year for Desmond as he made several appearances in mainstream media. 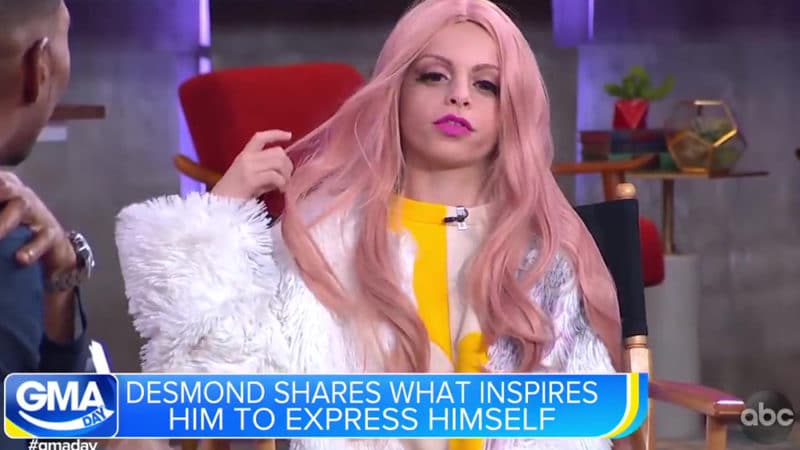 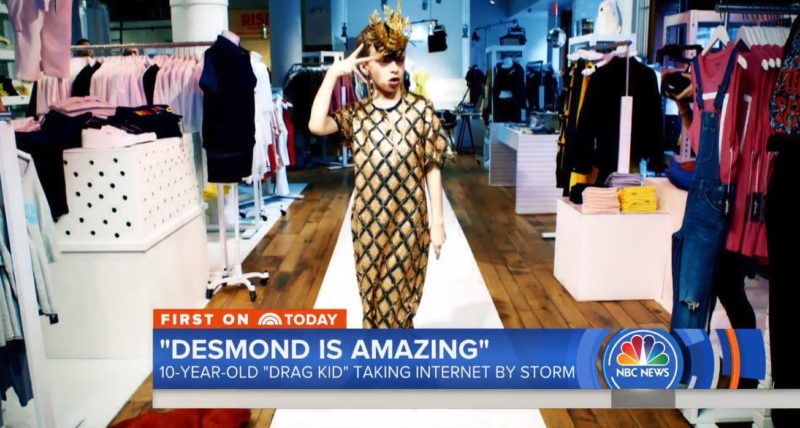 Desmond on the Today Show.

Desmond was also featured in several fashion magazines. If you’ve read my series of articles Symbolic Pics of the Month, you will instantly recognize some of the symbolism going on there. 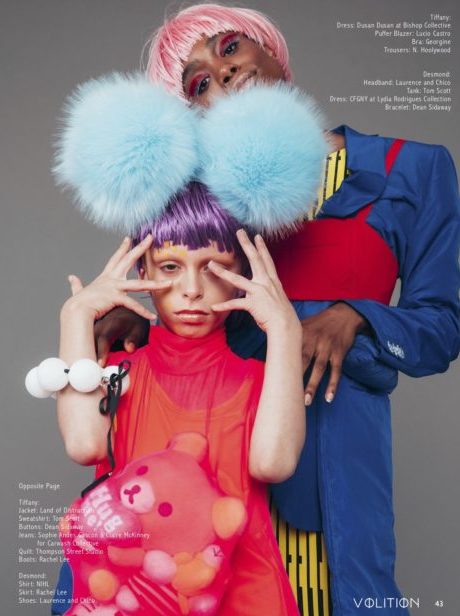 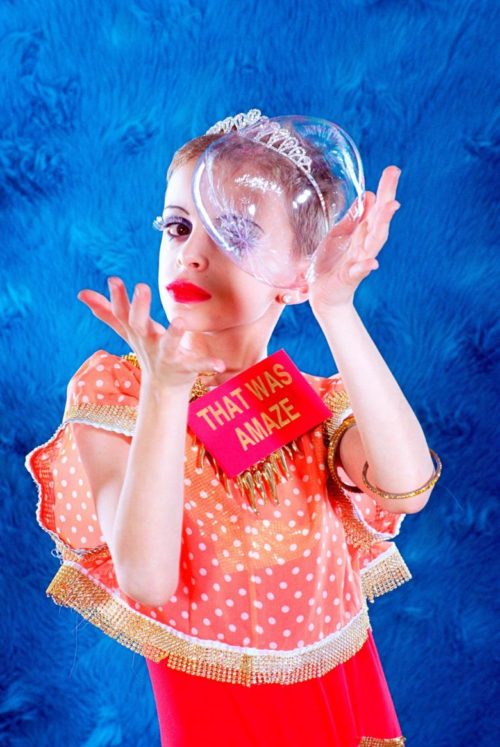 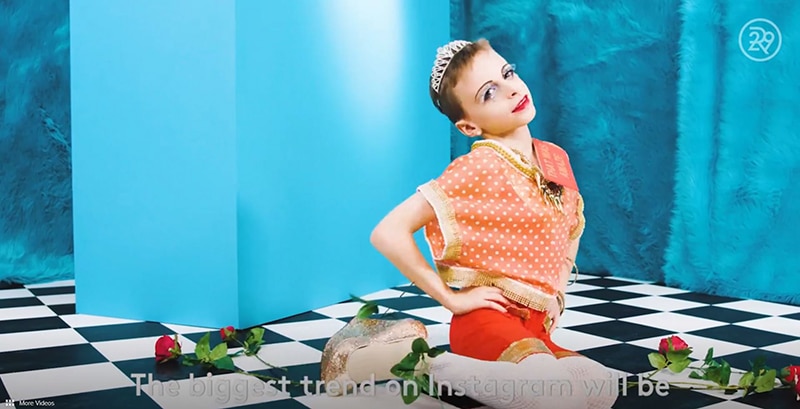 Refinery29 also featured a video of Desmond dancing on a checkerboard pattern floor with red roses. This exact combination of symbols is extremely significant in the dark world of Monarch Mind Control. 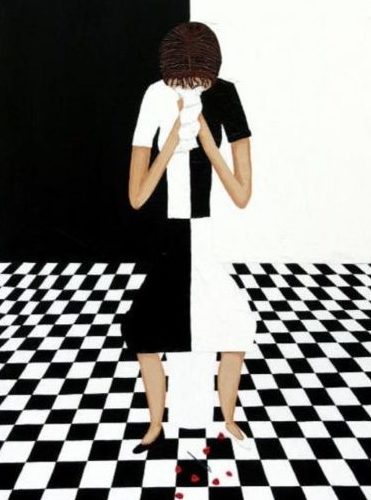 This is a painting by Kim Noble – a survivor of trauma-based mind control. One series of paintings depict the abuse of an MK slave in a setting that features intense dualistic patterns and a rose. 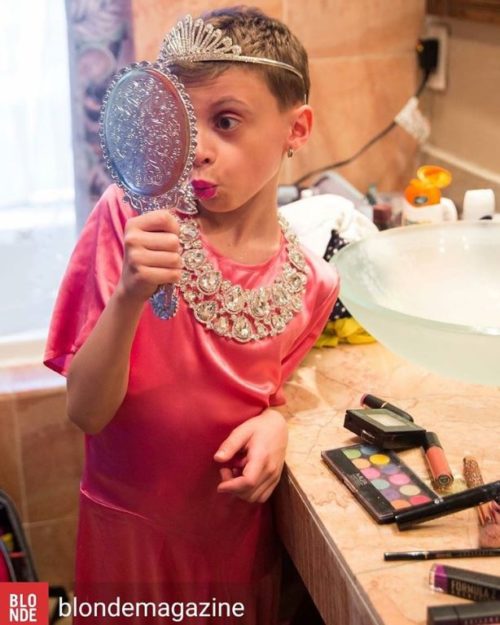 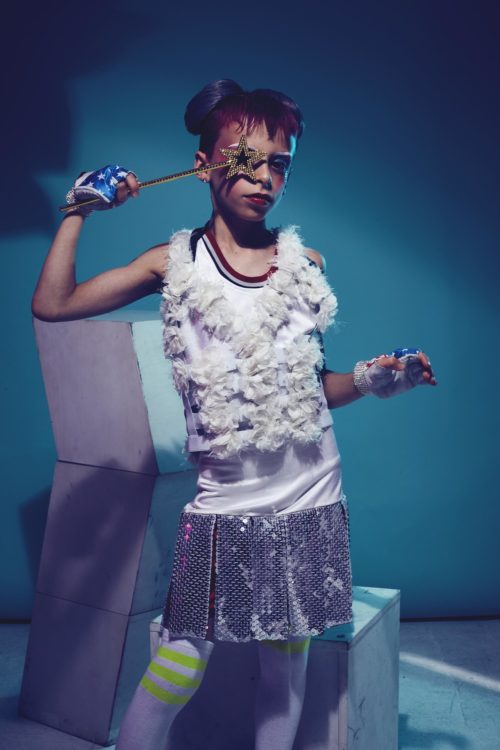 One eye hidden in Out Magazine. As stated in previous articles, the one-eye sign is used to represent elite control. 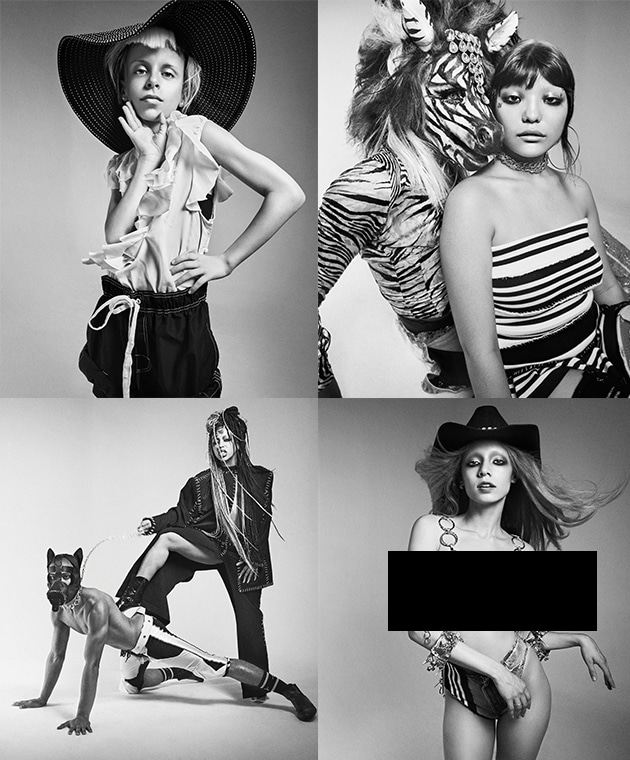 Desmond was part of an ad campaign for the brand Gypsy Sport. As you can see, he modeled alongside some rather explicit imagery (I even had to censor a pic). 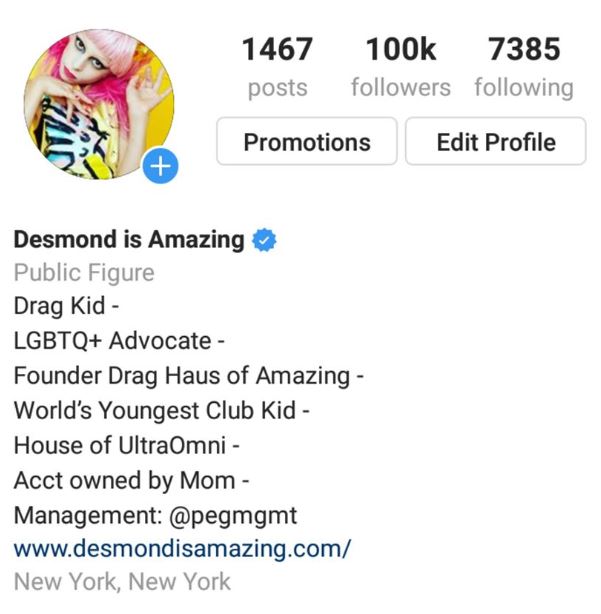 “Account owned by mom”. That’s all you need to know. 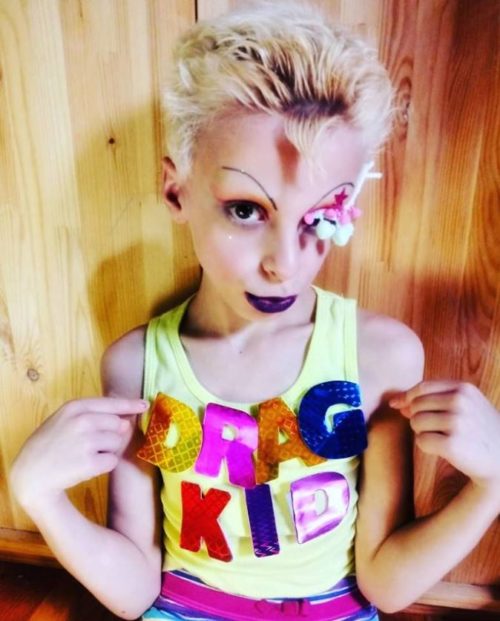 Bleach hair, eyebrows gone, lots of makeup and, of course, one eye hidden. 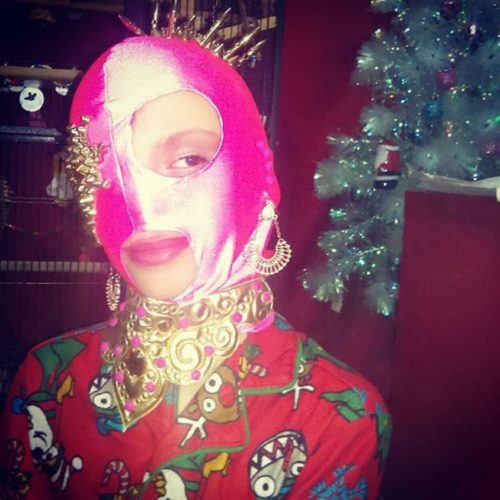 Desmond wears a one-eyed gimp-like mask. These masks are used to “dominate, depersonalize and sexually objectify the wearer”. The account says that the outfit was inspired by drag “icon” Leigh Bowery. 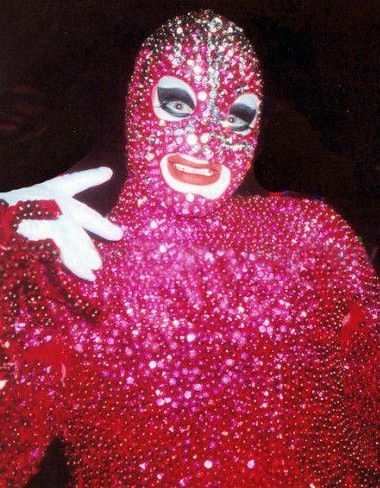 Leigh Bowery was renowned for his outlandish, drug-fueled parties until he died from an “AIDS-related illness” in 1994. 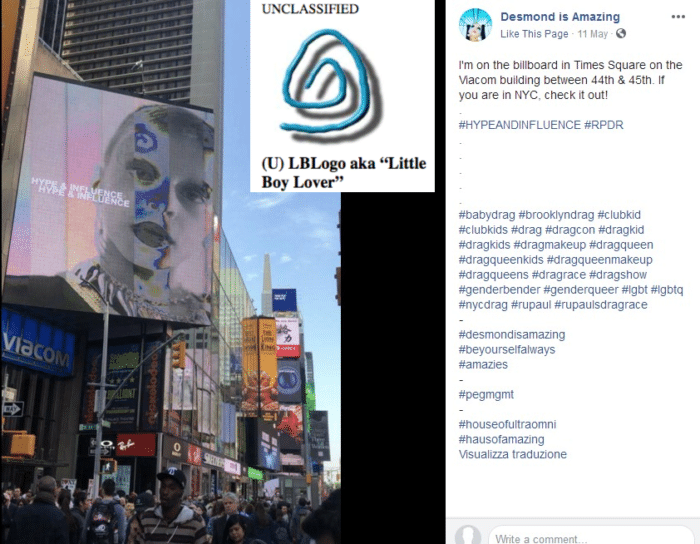 Desmond on a billboard in Times Squares. There’s a familiar symbol drawn on his face.

As if his schedule wasn’t full enough, Desmond also performs in various venues for money. In last December, a video of Desmond dancing at the gay bar 3 Dollar Bill in Brooklyn surfaced online and caused outrage. Dressed in a crop top and full makeup to look like Gwen Stefani, Desmond danced as adult men threw money on stage … not unlike a stripper. 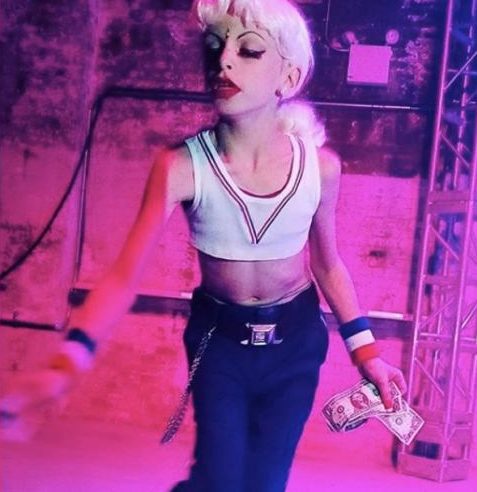 Desmond collecting tips during his performance at a NY gay bar. 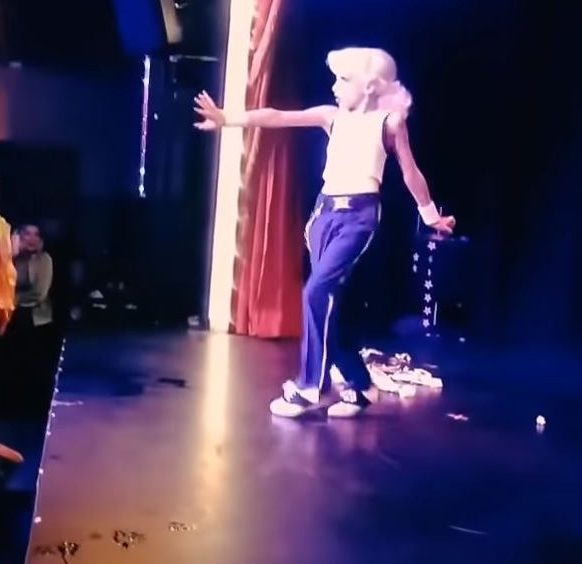 Performing with money on the floor. 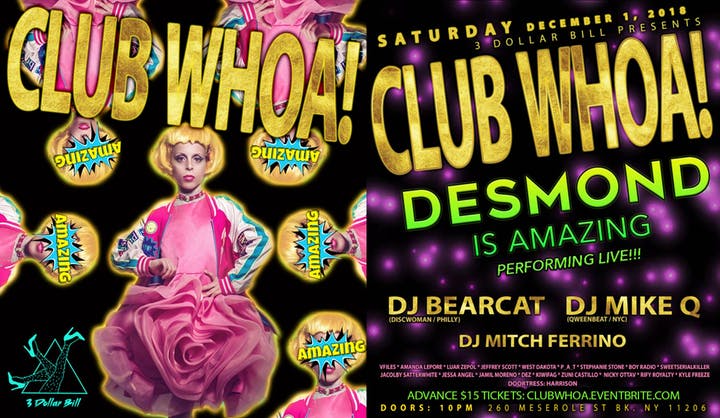 The event was heavily promoted by the bar.

The footage caused a great deal of controversy as many believed that no child should be performing at a bar for adults where alcohol flows. Faced with the backlash, Desmond’s mother took to social media to justify the performance.

As you can see, the mother states that being concerned for the well-being of an 11-year-old child is “blatant homophobia”. Does that make sense? What if it was a young girl who was dancing in front of straight men? The outrage would probably have been tenfold. In other posts, Desmond’s mother stresses the fact that Desmond is autistic to justify his act.

Desmond also recently made the news for a new, “groundbreaking” project: Haus of Amazing, a social network where drag kids can share and connect. The website says that “because the drag house is restricted to members age 20 and younger, members can communicate freely and candidly with their peers without the often judgmental interference of adults.” 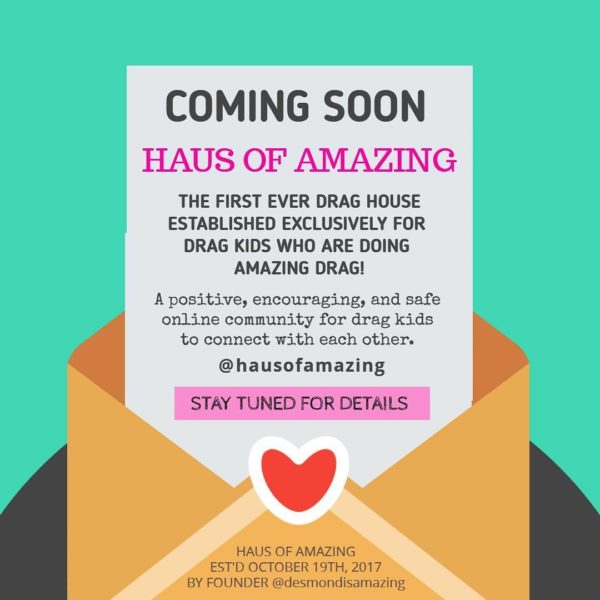 Is there a chance that such a site would attract adult pedolphiles? I mean, come on. Because there are others “drag kids” out there and their acts are even more upsetting. Here’s an example.

Queen Lactatia, a 10-year-old Canadian boy named Nemis Quinn Mélançon-Golden, is also being heavily promoted in mainstream media. I won’t describe his entire life. You only need to see a few social media posts to understand that there’s something terribly wrong going on here.

How is this not sexualizing a minor?

Let’s talk about that shirt. 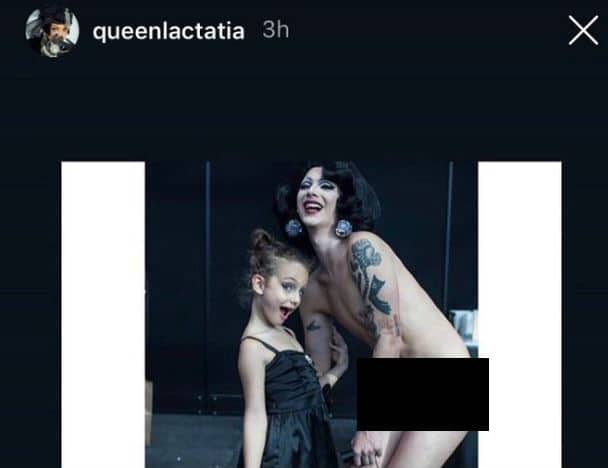 Queen Lactatia posing with the winner of Ru Paul’s Drag Race … who is naked.

Despite everything mentioned above, the mainstream media coverage of Desmond Is Amazing is overwhelmingly glowing. I did not find one mass media source that even mentioned some of the questionable-for-his-age things associated with his act. Quite to the contrary, all the reports and articles I found celebrate Desmond’s “fierceness” and paint his parents as saints. Why is the coverage surrounding him so Orwellian-ly one-sided?

Desmond is not simply a “boy who likes to dress in drag”. He is being used to push several agendas, including the sexualization of children and the normalization of pedophilia. To do so, he is being pushed into a world that is should be reserved exclusively for consenting adults. Anything else is child abuse.