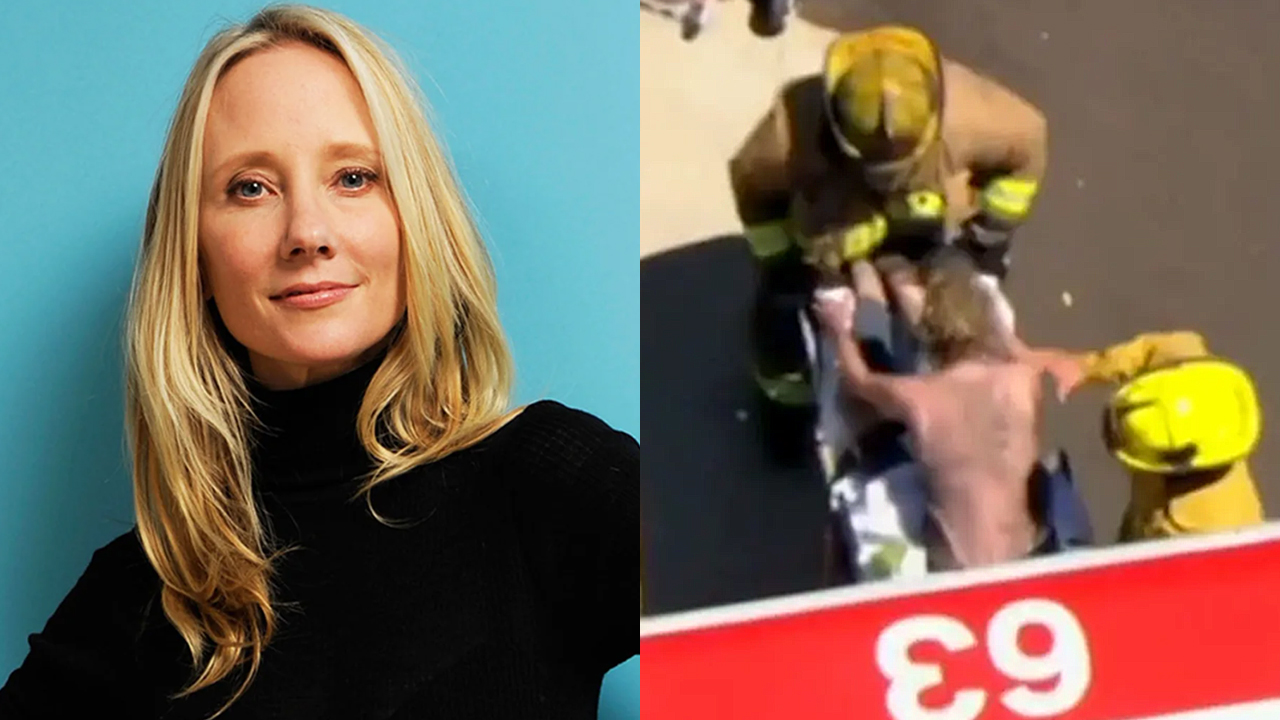 On August 5th, Anne Heche sped through a residential area, crashed her car into a Los Angeles home, and was taken to a hospital after a bizarre “rescue” that she actually attempted to escape. Six days later, the 53-year-old actress was pronounced “brain dead” and the coroner quickly ruled the death as “accidental” due to “inhalation of smoke and thermal injuries”.

Since then, strange facts and puzzling videos have surfaced online pointing to the fact that there’s more to the story than what was reported in mass media. Clearly, Heche was distraught about something. However, as is often the case in these strange Hollywood deaths, police investigation was cut short and the media focused its coverage on her consuming drugs and alcohol.

What actually happened on that fateful day?

In order to get a clearer picture of these chaotic moments, we first need to look at Heche’s life and projects. Because, maybe, she knew too much. 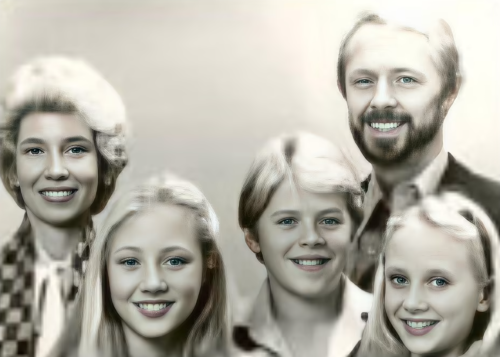 Anne Heche’s early years were nothing less than traumatic. In multiple interviews, Heche stated that her father repeatedly raped her from the time she was an infant until she was 12 years old.

When Heche was 13, her father died from HIV/AIDS at 45 years old. In interviews, Heche stated that her father contracted the disease after having sex with multiple homosexual partners. When she was asked why a homosexual man would abuse a young girl, she replied:

Three months after her father’s death, her 18-year-old brother Nathan died in a car crash. While the official determination was that he fell asleep at the wheel and struck a tree, Heche believes that it was a suicide.

In a 2001 interview with Barbara Walters, Heche stated that the abuse she underwent during childhood caused her to believe that she was two different people. She said:

Here, Heche described dissociation and alter-personas, two core concepts of Monarch mind control – a practice that is rampant in Hollywood.

By the time she was 25, Heche said her personality had begun to “fragment”, shattering into moments of madness. Celestia, her other personality whom she believed was a reincarnation of God, spoke a different language and had special powers.

“You name it, I could do it. I could see into the future. I could heal people. I don’t know where it came from. I was, in my mind, learning it from God.”
– Ibid.

MK slaves are sometimes programmed for ESP (extra-sensory perception). The fact that Heche described all of the core aspects of mind control indicates that she might have undergone some type of programming. It is also possible that she had faint, distorted memories of it (i.e. she “learned it from God”).

Heche’s first public relationship was with actor Steve Martin – who was 24 years her senior. Then, she engaged in a highly publicized relationship with Ellen Degeneres. 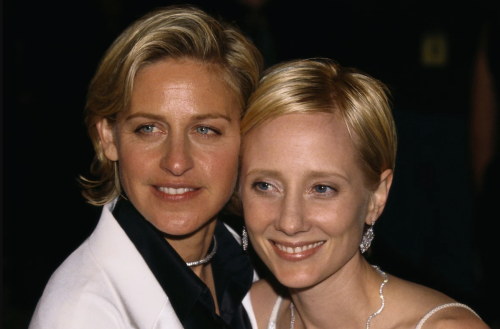 In August 2000, on the day following her breakup with Ellen, Heche had one of those MKULTRA-style breakdowns, complete with bizarre, erratic behavior.

Following her separation from DeGeneres in August 2000, Heche drove from Los Angeles to Cantua Creek in a Toyota SUV. She was wearing only a bra and shorts at the time, parked the car, and walked 1+1⁄2 miles (2.4 km), before reaching a ranch house. The homeowner, Araceli Campiz, who had seen Heche in a movie, recognized her and let her in. After drinking a significant amount of water, Heche “took off her Nikes and said she needed to take a shower.” Campiz assumed that Heche was not under the influence of alcohol or drugs, but Heche later revealed that she had taken ecstasy. After taking a shower, Heche entered the living room, asked for a pair of slippers, and suggested that they should watch a movie. After half an hour, Campiz contacted the Fresno County sheriff’s department.
– Wikipedia, Anne Heche

In her 20/20 interview said about this bizarre night:

“I was told to go to a place where I would meet a spaceship. I was told in order to get on the spaceship that I would have to take a hit of Ecstasy. Fresno was the culmination of a journey and a world that I thought I needed to escape to in order to find love.”

In 2001, Heche released a book about her mental issues. 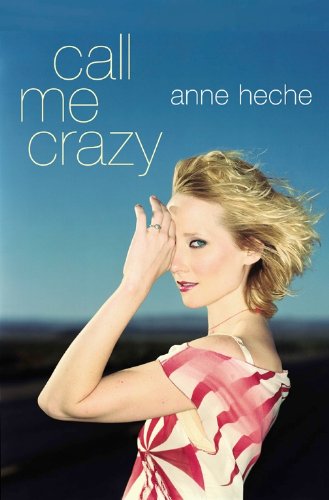 The cover of the book features an unmistakable one-eye sign. Was it a coded way of saying that her “issues” were actually a result of industry programming? 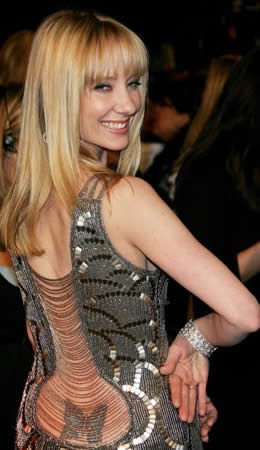 After these troubled years, Heche apparently found some mental health and stability. She eventually married actor James Tupper with whom she had a child. In the following years, she took part in some interesting projects. 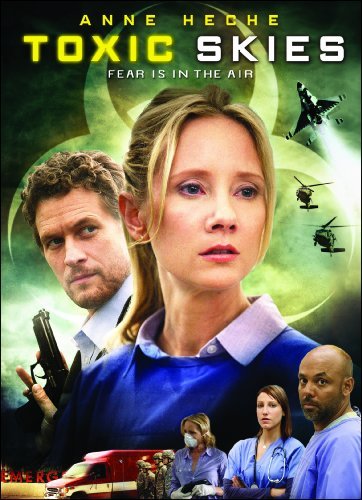 The poster of Toxic Skies.

In the movie, Heche plays the role of a doctor who works for the Global Health Organization (a reference to the World Health Organization) during the outbreak of a pandemic. As the government puts all of Seattle under quarantine (even using the military to prevent people from leaving the city), she discovers the root cause of the illness: Chemtrails. Indeed, the epidemic was caused by a secret government program that spread immune weakness through toxins in jet fuel. Then, she discovers the sinister reason behind this man-made epidemic: Forcing mass vaccinations.

At the time of her death, Heche was working on a movie about child sex trafficking: Girl in Room 13. 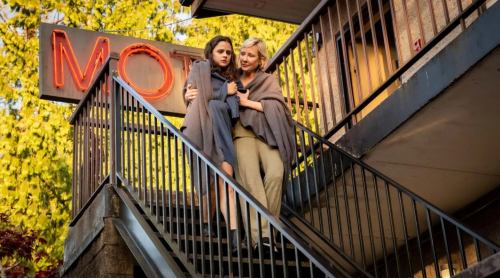 The movie is about an opioid-addicted girl who is held captive in a motel room by her former drug dealer as he tries to force her into sex trafficking. To do so, the dealer attempts to break her down by using drugs, alcohol and by starving her.

Despite Heche’s death, the Lifetime movie is set to premiere on September 13th.

The fact that Heche died in mysterious circumstances while working on a movie about sex trafficking raised some eyebrows. The situation is reminiscent of the bizarre death of Avicii who died shortly after releasing a music video denouncing child sex trafficking. 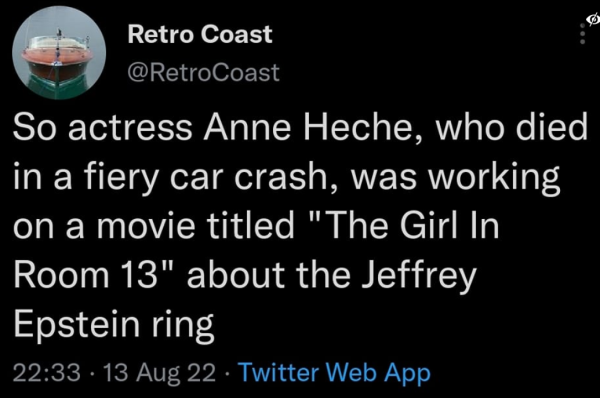 A “fact-check” article by Reuters. The article states that, although the movie is said to be based on actual events, it is not about Epstein.

Every time mass media engages in these bouts of censorship and “fact-checking”, there’s something off. While the movie itself might not be about Epstein, there’s a clear media effort to control the narrative surrounding Anne Heche’s death. However, the bizarre circumstances surrounding her fatal accident are rather difficult to ignore.

Simply put, the events of August 5th are bizarre. While the official story states that Heche was drugged out of her mind (cocaine and fentanyl were reportedly found in her bloodstream), facts seem to tell a different story.

Prior to her fatal car ride, Heche was seen at a beauty salon where she bought a bright-red colored wig. 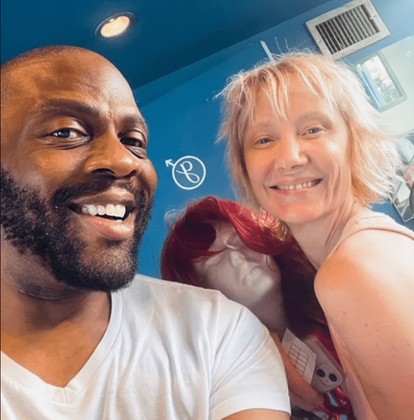 The owner of the salon posted this pic on social media with Heche smiling next to the wig she bought.

The owner told Heche that the red wig hadn’t been cut, styled, or even washed yet, but she reportedly did not care.

In an interview with the LA Times, the salon owner stated that Heche acted like a “sweet little girl” when she stopped by at around 10:30 am. He added that she was “very pleasant” and that she “wasn’t speaking in cursive” – his way of saying that she did not appear to be under the influence of drugs or alcohol.

So why was Heche buying a wig in the first place? Was she trying to change her appearance and travel incognito? Because, in the events that followed, Heche was clearly spooked by something.

Shortly after buying the wig, Heche crashes her car into a garage. In one video, we hear a man forcefully ordering Heche to get out of the car. Instead of complying, Heche backs away and peels off.

Why was this man yelling at Heche? Was he angry at her for driving recklessly or was he “after her”? Clearly, Heche did not trust him.

Prior to the second crash, a ring video captured Heche’s car bolting down a residential street at a dangerous speed before crashing.

Then, her car crashed into a home at such a high speed that it went through its entire length and sparked a massive fire. 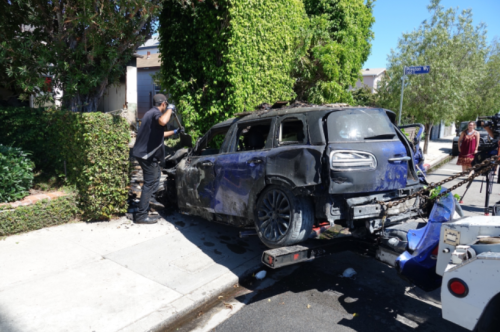 Heche’s car after the second crash.

So, minutes prior, Heche was at a salon where a witness claimed that she did not appear inebriated. Then, she drives in the most dangerous and reckless way imaginable. What happened? Was her car hacked and remote-controlled (a known tactic to hide assassinations as accidents)?

No matter what’s the case, the events that follow only add to the suspicious nature of the situation. Just watch this video of Heche being “rescued” by firefighters.

Heche pulled away the white sheets that covered her and desperately attempted to get off the stretcher. The firefighters then forced her into the ambulance. 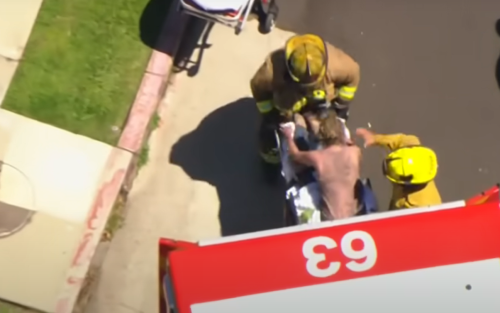 Heche attempts to get off the stretcher.

Why was Heche trying to get away? It is almost as if she knew that, if she went into that ambulance, she would never leave the hospital alive. Furthermore, why wasn’t Heche fully immobilized with neck protection, cervical collar, oxygen therapy, and other treatments usual given in such cases? She was jammed into the ambulance while she was literally flailing around. Was this a rescue … or a kidnapping?

The comments section of this YouTube video is full of people highlighting the strange details of this “rescue”. Here are some examples. 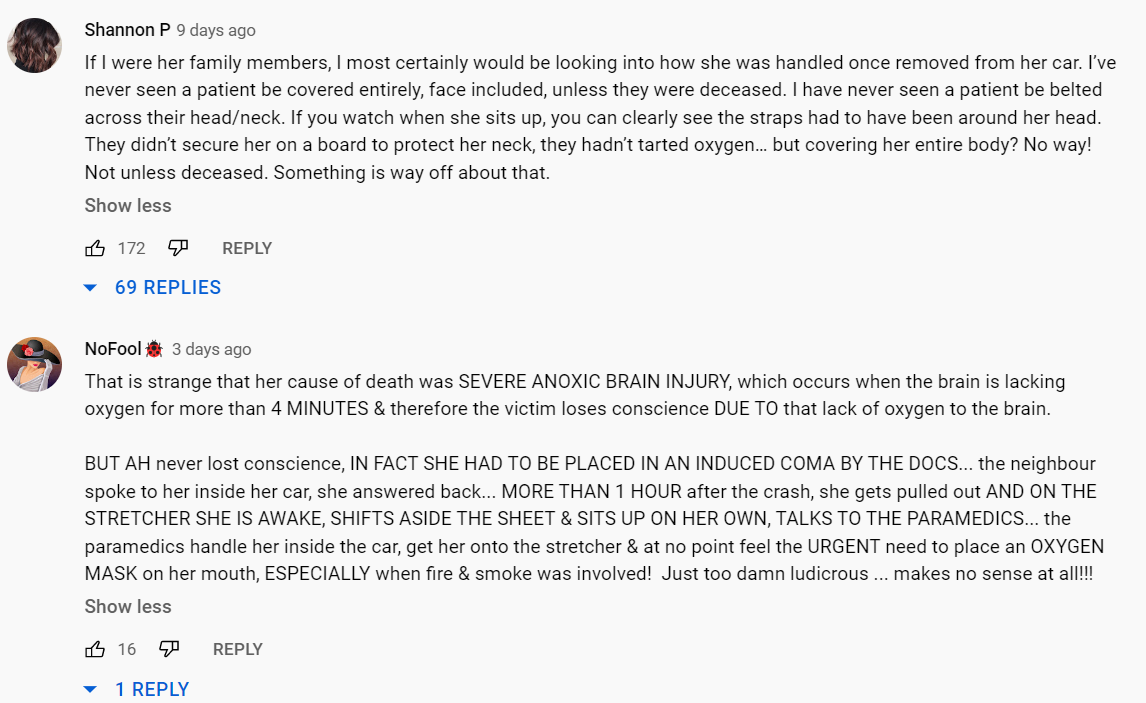 Early news reports stated that Heche was responsive after the accident. Furthermore, it was originally reported that she would “pull through” and survive the accident.

A headline from the NY Post about Heche surviving the accident.

Despite these early reports, Heche was declared “brain dead” on August 12th. Hours after her death, and despite the strangeness that surrounded the accident, the LAPD announced that it would not investigate Heche’s death any further.

The death was ruled “accidental” due to “inhalation of smoke and thermal injuries”. Case closed, apparently.

Saying that Anne Heche lived a troubled life is probably an understatement. Right from early childhood, she was subjected to the worst abuse imaginable: Repeated rape by her own father. This horrific situation caused her to dissociate from reality and her personality to split – a response mechanism to intense trauma that is exploited in Monarch programming.

One can say that Heche’s traumatic childhood “prepared” her for the dark side of the entertainment industry as she could be controlled by industry handlers.

After a highly mediatized relationship with Ellen Degeneres, Heche had bouts of erratic behavior that were similar to the breakdowns of other industry slaves such as Britney Spears. When these types of celebrities manage to (somewhat) pry away from the industry, they often become pariahs. They know too much and they tend to become loose cannons.

So, they often die in mysterious circumstances. Is this what happened to Anne Heche? Were they “after her”? Was she a victim of the “star whackers” as described by Randy Quaid?

One thing is for sure, the last time she was seen in public, she was definitely trying to run away from something.

The Satanic World of the White House’s New Monkeypox Czar

A Ritual to Baal? The Occult Symbolism in the Opening Ceremony of the 2022 Commonwealth Games