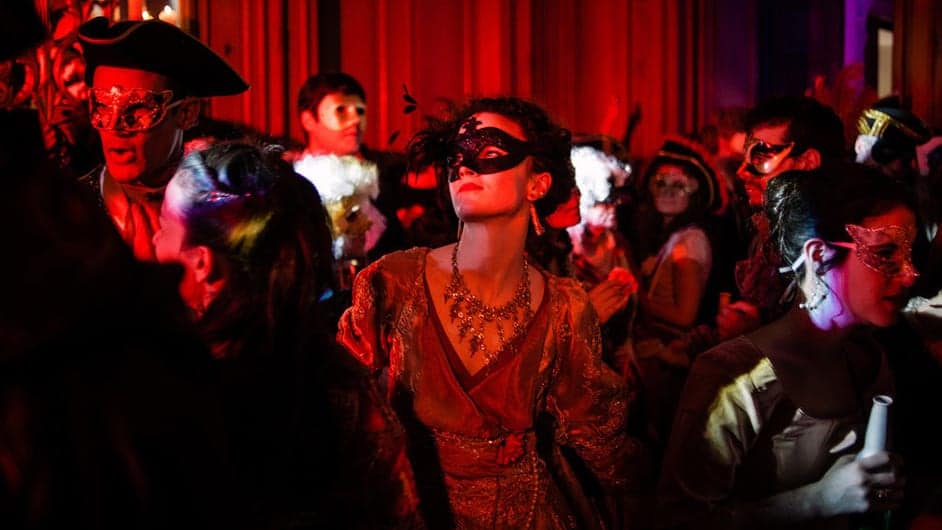 UNICEF stands for United Nations International Children’s Emergency Fund. Its mission is to “address the needs of children and women in developing countries”. Apparently, another mission is to host creepy masquerade balls featuring celebrities dressed in satanic costumes.

Not unlike most posh Hollywood happenings, the UNICEF ball was preceded by a red carpet event where the illustrious guests paraded around in their Louboutin heels, Versace dresses and … satanic masks. All for hungry children of course. 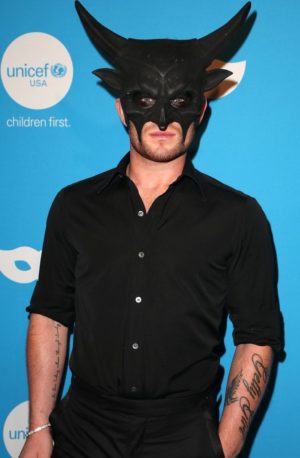 Fashion designer August Getty came to the party looking like a satanic superhero I dubbed Goatman. The words “children first” behind him are rather worrying.

Getty was also in attendance at last year’s ball. Let’s see if his mask was less satanic. 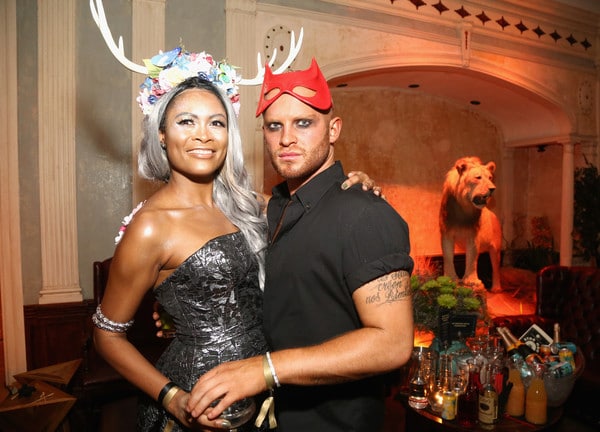 Getty posing with an event organizer at the 2017 Unicef Masquerade ball. He really wants to walk around looking like a devil at this party. 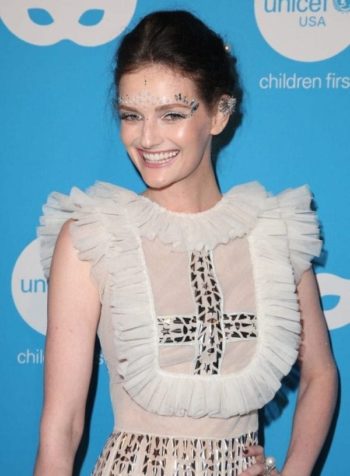 And no, this is no “coincidence”. 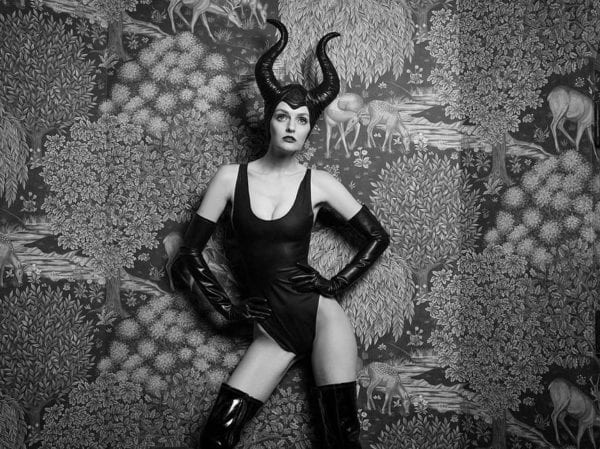 Lydia Hearst is the great-granddaughter of the media tycoon William Randolph Hearst – one of the most powerful and influent men of the 20th century. He was a prominent member of the occult elite. Here are some quotes about him:

“William Randolph Hearst Jr., was a 33 degree mason and a very powerful man in the media world.”
– B.Huldah, The JFK Files

“Illuminatus William Randolph Hearst gave Anton LaVey some big help. His Avon Publishing published his Satanic Bible in 1969 (it was first released in Dec. ‘69). Since then it has reportedly gone through over 30 printings. LaVey’s next book The Satanic Rituals also was published by Hearst Avon in 1972. It talks about the power that blood sacrifices give the magician. Hearst’s papers also gave him publicity.”
– Fritz Springmeier, The Illuminati Formula to Create a Mind Control Slave

Considering these facts, the inverted cross begins to make sense.

Ready to meet the other guests? 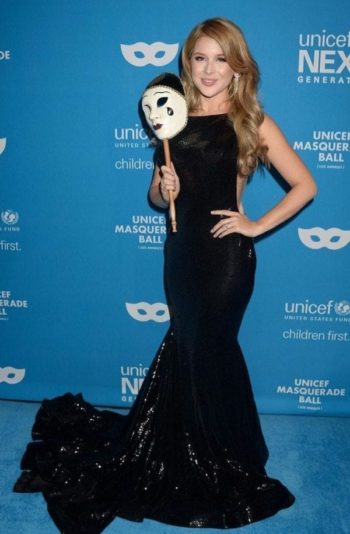 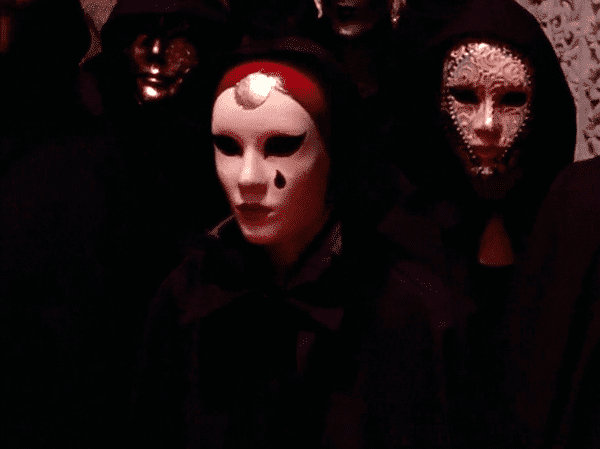 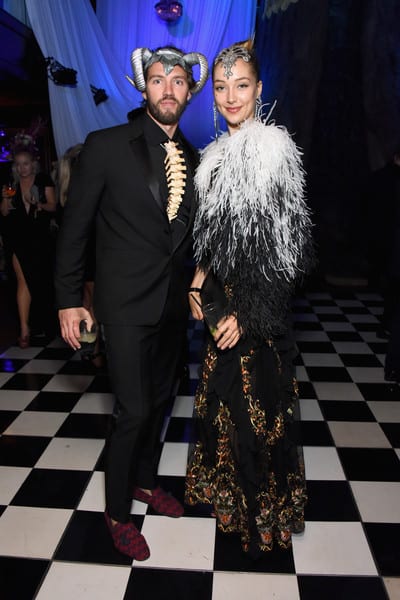 The dancefloor was actually a ritualistic Masonic checkerboard pattern. 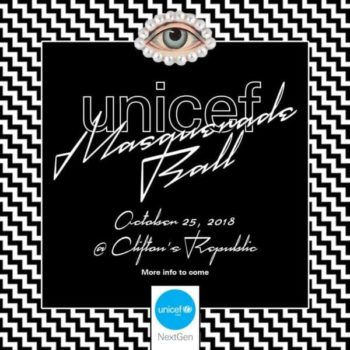 Invitations to the event feature a dualistic pattern under an all-seeing eye.

A short video promoting last year’s ball was somewhat cringe-inducing. It begins with images of children in developing countries. Then, dance music starts playing as we see rich socialites drinking and dancing while dressed like demons. 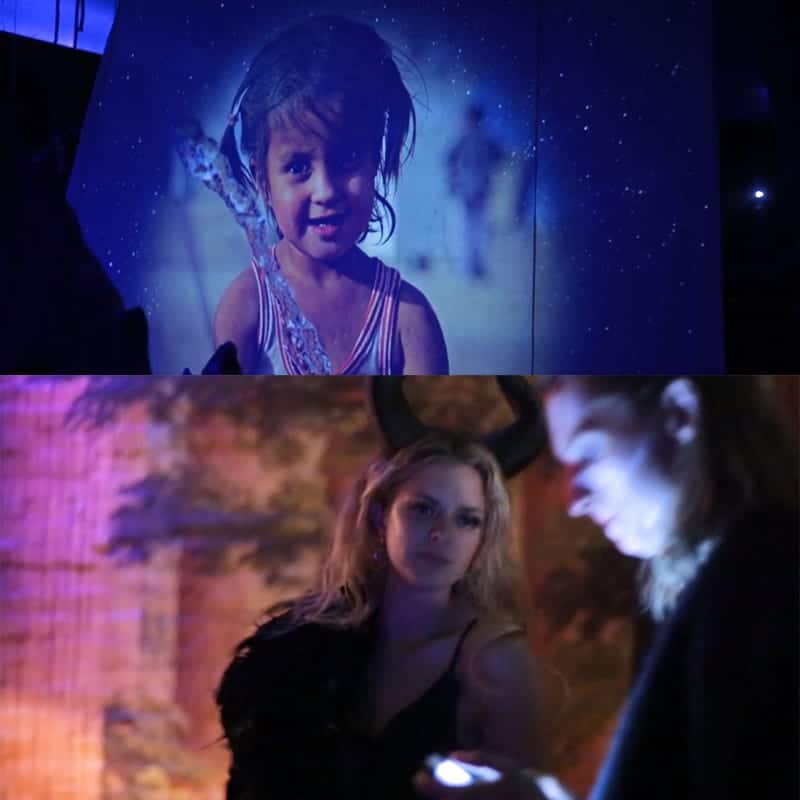 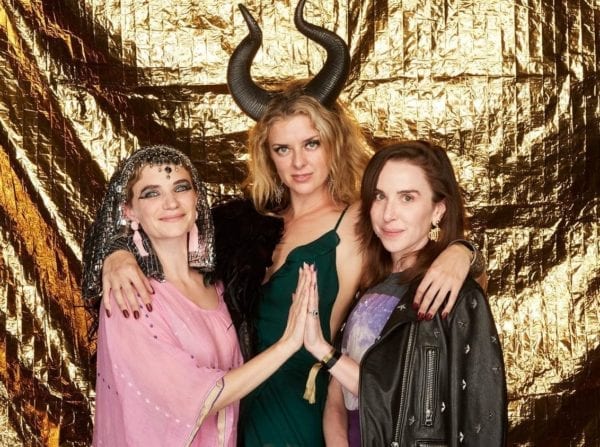 The photobooth at last year’s event.

A look at the official website of the event makes things clear: The event is 100% inspired by the occult elite and its rituals. The website greets you with this image.

The “Attire” tab of the website is actually a Pinterest page featuring images that are supposed to inspire party-goers. This year’s theme was “Post Modern Surrealism”. However, looking at the images that were selected, there’s clearly a more specific theme happening here: Occult elite. It seriously looks like a mega-edition of Symbolic Pics of the Month.

Even more bizarre, UNICEF’s Pinterest page features several pictures from the 1972 Masquerade Ball hosted by Helene De Rothschild. A few years ago, I published an article about this exact event, explaining how it was a “blueprint” for today’s occult elite symbolism. 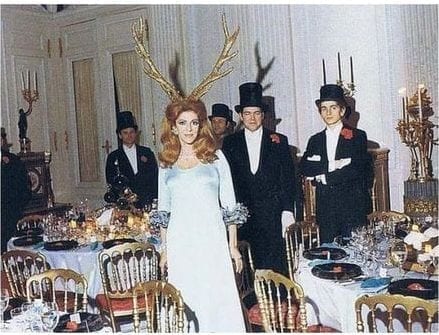 The Pinterest page created by UNICEF features multiple pictures of the Rothschild’s masquerade ball, including this one of Helene de Rothschild wearing gigantic antlers. 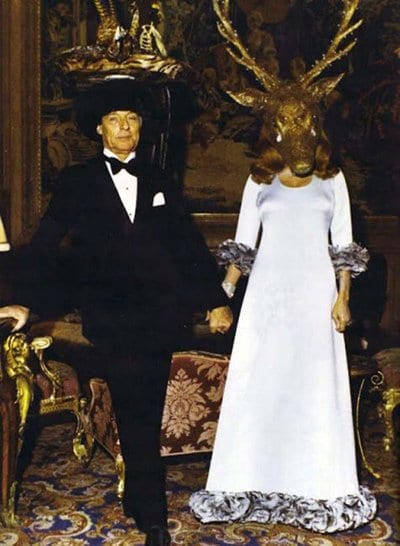 Here she is wearing her entire costume. How lovely.

Not unlike “modern” occult elite parties, the Rothschilds ball mixed “surrealism” with subtle satanism and allusions to cannibalism. 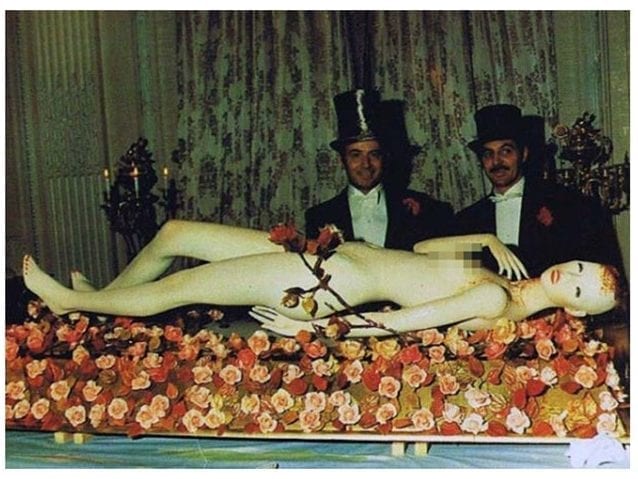 The party featured mock cadavers on the dinner table. 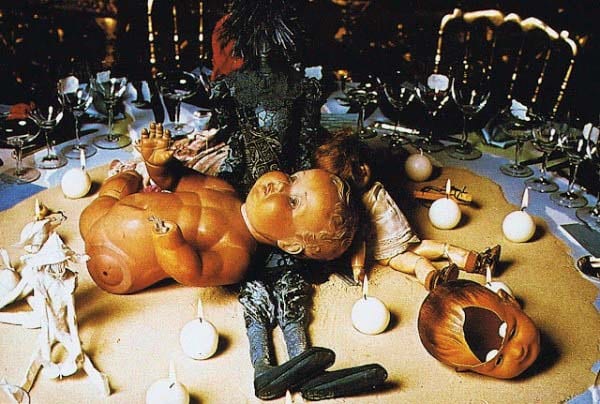 Also, lots of dismembered babies. Should an organization like UNICEF be inspired by such an event? 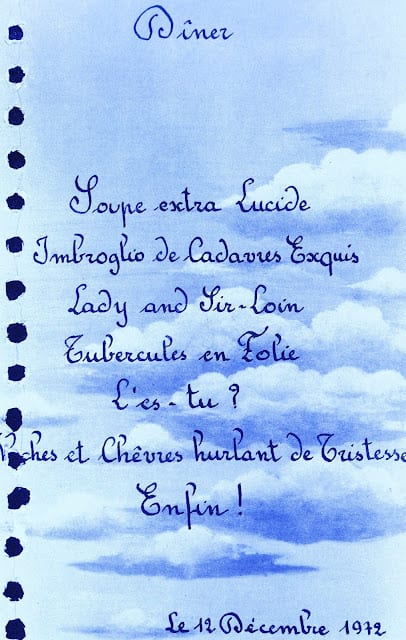 The second item on the menu can be translated to “imbroglio of delicious cadavers”. There is something about the elite and cannibalism.

Here are other images featured on UNICEF’s Pinterest page. 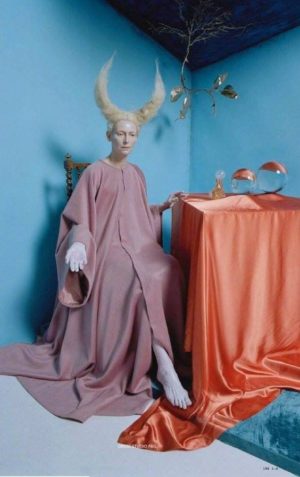 Tilda Swinton in a creepy photoshoot. As explained in this edition of SPOTM, the entire phootshoot was replete with MK imagery. 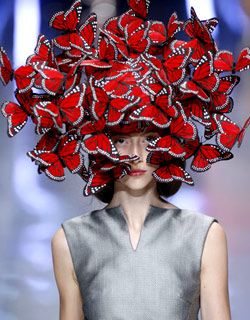 This creation by Alexander McQueen (the elite’s favorite occult designer) is 100% about Monarch mind control. 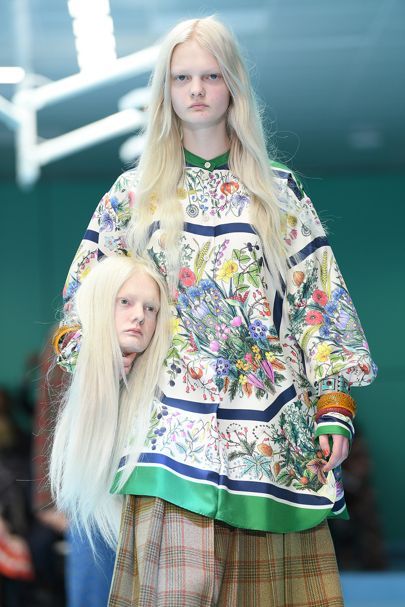 In this edition of SPOTM, I explained how this fashion show, which took place in a mock-operation room, was all about the MK symbolism. 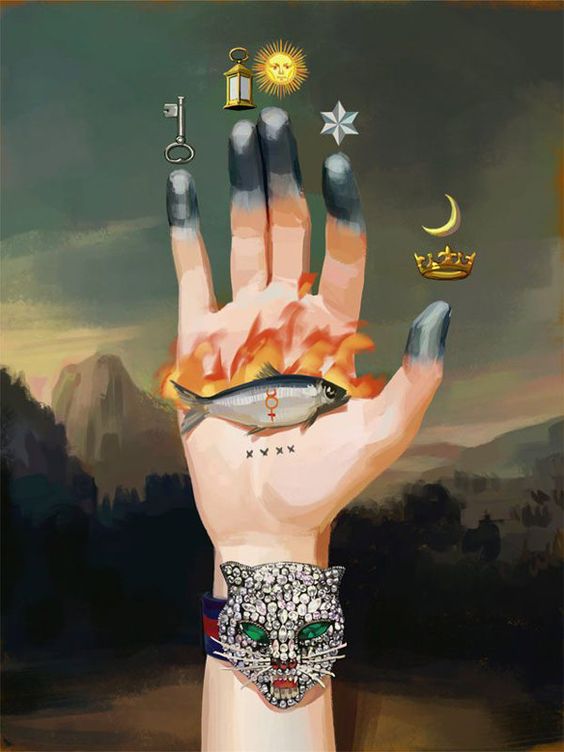 The Pinterest page also featured this Gucci ad which is heavily inspired by the occult symbol known as the Hand of the Mysteries. 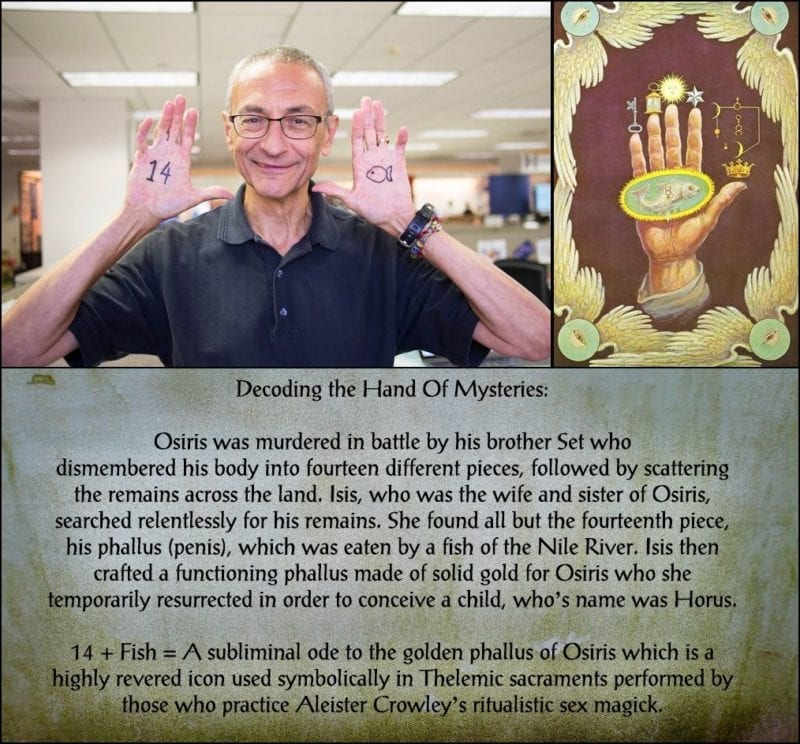 A bizarre picture of John Podesta wearing the Hand of the Mysteries.

In short, the UNICEF page basically says: “We fully adhere to the occult elite’s twisted culture”. Some might say: “It’s all good, as long as it’s for the children”. Is UNICEF really for the children?

While UNICEF’s original goal was to provide temporary emergency relief to children victim of World War II, it became a permanent part of the United Nations System a few years later. Since then, its mission gradually changed from saving children from death to “advocating for their rights”.

Critics of UNICEF claim the agency and Bellamy have contributed to the crisis by focusing on political causes and steering UNICEF away from the “core business” of ensuring children’s survival.

Richard Horton, editor of the prestigious medical journal The Lancet, has published a blistering editorial, which calls Bellamy’s direction “shameful.”

Bellamy’s “rights-based approach” (focusing on children’s “rights” as opposed to their simple physical survival), Horton said, has also been devastating to children, an estimated 10 million of whom die from preventable causes before the age of five every year.

UNICEF’s implementation of its “children’s rights” vision is also vulnerable to criticism. Indeed, UNICEF’s Medium Term Strategic Plan is more of a blueprint for social engineering along radical feminist lines. The plan states, “UNICEF will advocate for legal reforms and adoption of policies and programs that will raise the status of girls and women both in the family and in society.”
– Wendy McElroy, UNICEF’s ‘Rights’ Focus Is All Wrong

While the organization “masquerades” itself in a mask of charity, its true face has been revealed through countless controversies involving fraud, corruption, and children.

UNICEF has been often criticized for preventing millions of orphans from being adopted by families in the Western world. Other groups state that UNICEF has turned into a “contraceptive-distributing, abortion-performing and sterilization-providing partner of some of the world’s most notorious “family planning” organizations”.

In 2014, the Kenya Catholic Doctors Association accused UNICEF of conducting a “secret mass sterilization exercise” when an anti-fertility agent was found in the tetanus vaccine administrated to 2.3 million girls and women.

In February 2018, UNICEF admitted to not protecting children who were sexually abused by the United Nation’s own staff.

The UN’s children’s agency has admitted shortcomings in its humanitarian support to children who allege that they were raped and sexually abused by French peacekeepers in Central African Republic.

A statement by Unicef Netherlands is the first public acknowledgement of the agency’s recent failure to provide support to some of the victims of alleged abuse by peacekeepers in the African nation. It comes as the aid sector and the UN face increasing scrutiny for their failings in managing internal sexual misconduct by their own staff.

Unicef was given the task of overseeing the support for children who said they had been abused by peacekeepers.
– The Guardian, Unicef admits failings with child victims of alleged sex abuse by peacekeepers

In March 2018, UNICEF signed onto the “International Technical Guidance on Sexuality Education” that calls for children to be able to “describe male and female responses to sexual stimulation,” and “summarize key elements of sexual pleasure.” Some groups accused UNICEF of “sexualizing children”.

A group of women protesting at UNICEF’s office near the UN on March 30th.

The document also promotes the idea that a person’s “gender identity” may not match their biological sex. UNICEF wants this explained to children in kindergarten, arguing they should “reflect on how they feel about their biological sex and gender”. Should this truly be a priority?

This article went from B-list celebrities parading in devil horns and inverted crosses to social engineering in developing nations. The link between these two separate worlds is clear: The occult elite. While, under the guise of charity, a very specific agenda is being conducted in the poorest nations of the world, the same organization holds parties inspired by the Rothschild’s pseudo-satanic balls.

All you need to do is to connect the dots to understand who truly hides behind those masks.

An Objective Analysis of the QAnon Phenomenon