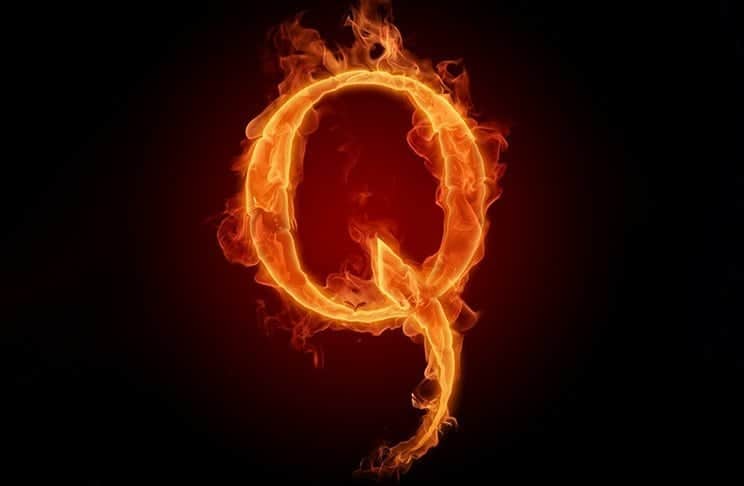 Claiming to be a high-level government insider, “Q” has been posting cryptic messages on 8Chan, unveiling the extent of the “deep state” while claiming that it is about to be taken down. Here’s a look at this mind-boggling phenomenon.

To some, “Q” is a hero, a patriot, and maybe even something of a savior. To others, Q is a troll conducting either an elaborate LARP (a live-action role-playing game) or a government-conducted PSYOP. At the center of it all: Hundreds of cryptic messages posted on a regular basis by an anonymous 8Chan user who claims to have “Q Clearance”, the “highest level of security within all departments”. (Although we don’t if Q is a man, woman or a group of people, the pronoun “he” will be used in this article for legibility).

Through short forum posts comprised of keywords, codes, riddles, questions, pictures, and bizarre computer commands, Q claims to be delivering the “biggest intel drop in known history”. Every few days, a piece is added to a gigantic conspiracy puzzle which, once understood, is said to unlock the truth about the powers that be. And nothing less.

Through his posts, Q describes a global elite that is evil, satanic, and bent on pedophilia. In his descriptions, this elite group deals with international human trafficking, it orchestrates false flag events to advance its agenda, and conducts occult rituals behind closed doors. It owns and uses Hollywood, mainstream media and social networks to control the narrative and to censor the truth.

While the above might not surprise the average “truther”, Q’s message has a startling twist: Donald Trump is actually raging a silent war against this globalist elite and is even brewing a major “counter-coup” to retake the American government. According to Q, Mueller’s investigation regarding Russian collusion is a front. In actuality, he’s about to indict hundreds of high-profile politicians and celebrities including the Clintons, Podestas, and Soros of this world. This operation is expected to cause intense turmoil and even riots.

Q followers refer to this period as “the storm” – a reference to Trump’s eyebrow-raising remark made on October 6th about a gathering of military officers being “the calm before the storm”. When asked what he meant, Trump responded: “You’ll see.”

Here’s a look at the main elements of the Q phenomenon.

Q uses 8Chan for his intel drops – a board that is virtually unmoderated and populated with users who love to sleuth online and obsesses over details. For this reason, they refer to themselves as “autists”.

The “autistic” element is necessary because Q claims he cannot reveal things directly. He must use codes and questions to “reduce sniffer programs that continually absorb and analyze data”.

Q’s first post, made on October 28th, 2017, made a bold prediction about Hillary Clinton’s arrest, ensuing “massive riots” and the activation of the National Guard across the country on October 30th. 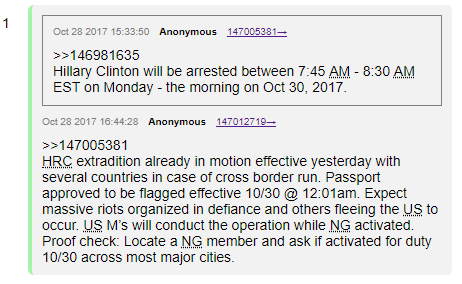 Evidently, October 30th came and went, and none of this happened. This did not stop Q from adding hundreds of additional posts in the following months.

The second crumb utilizes Q’s characteristic short questions and keywords to lay out the core of the plot. 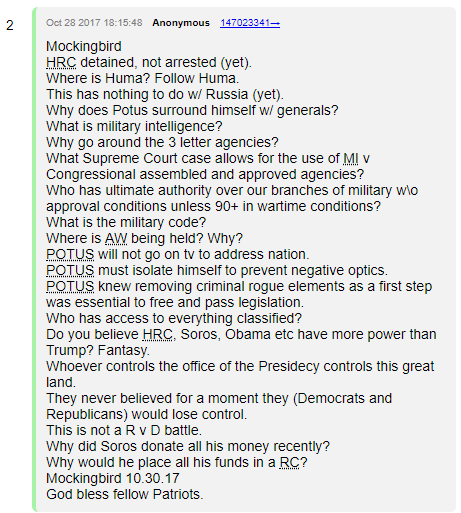 Like many other Q crumbs, this post refers to lots people, theories, and concepts. “Mockingbird” is a keyword that is often used by Q. It most likely refers to the CIA project Operation Mockingbird:

“Operation Mockingbird was an alleged large-scale program of the United States Central Intelligence Agency (CIA) that began in the early 1950s and attempted to manipulate news media for propaganda purposes. It funded student and cultural organizations and magazines as front organizations.”
– Wikipedia, OPeration Mockingbird

Q’s crumb states that Trump is “isolated”, that he goes around the “three letter agencies”, that he relies on Military intelligence and that he purposely surrounded himself with generals. He adds that the battle is not about Democrats versus Republicans.

Post #133 details Q’s conception of the global elite which, in his words, is hard to swallow. 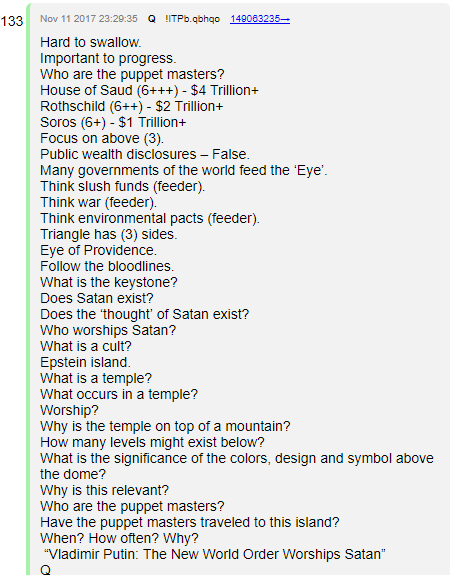 This post states that the “puppet masters” are based on 3 “sides”, like a triangle: The Saudis, the Rothschilds, and the Soros. At the center of the triangle, the “eye” is fed by governments worldwide using slush funds, wars, and environmental pacts. Q then alludes to Satan worship and Epstein Island. More specifically, he mentions the bizarre temple on Epstein Island, which he believes has hidden levels below. 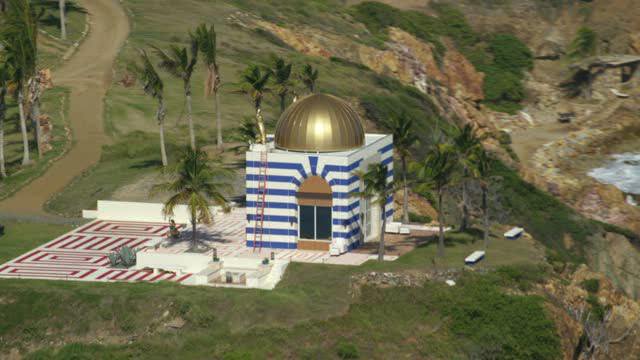 Jeffrey Epstein is a highly influential billionaire who was known for organizing massive parties with high-profile politicians and celebrities. Flight records show Bill Clinton flew on Epstein’s plane 26 times. In 2008, Epstein was convicted of soliciting an underage “sex slave” for prostitution, for which he served 13 months in prison.

Later crumbs allude to the importance of “spirit cooking” and mind controlled slaves in Hollywood.

Analyzing each crumb could fill an encyclopedia. Throughout his posts, Q touches on a variety of topics such as the Vegas shooting, the Saudi regime change, the North Korean negotiations, the tracking of Edward Snowden, a push for an Internet Bill of Rights and much more.

For many, these claims are hard to believe and “fake news”. However, Q’s “proofs” – evidence that he is directly connected with the POTUS – has turned many skeptics into believers.

To prove the fact that he is close to the POTUS, Q submitted revealing pictures and predicted some POTUS-related events. This led many to believe that he is indeed a White House insider. Some even believe Q is Trump himself. Here are some examples of proofs.

A Trump tweet posted on November 8th, which celebrated the one year anniversary of his election win, is said to contain clues relating to Q. 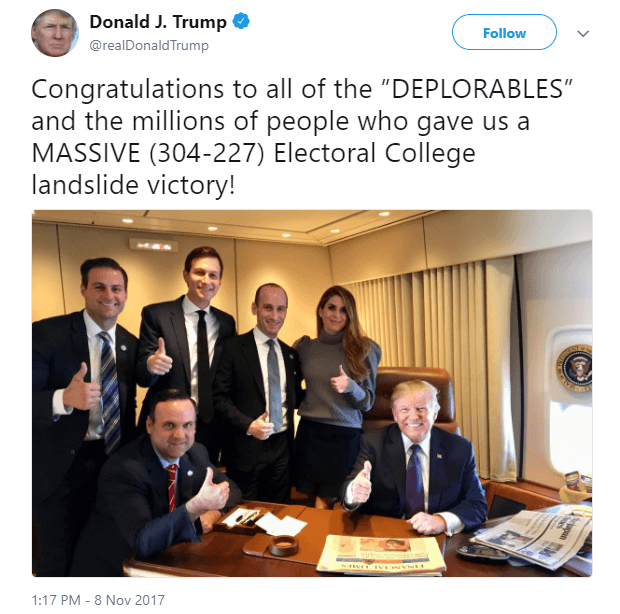 If one goes on Trump’s official Twitter account to this specific picture, the file name will be DOITQJ8UIAAowsQ.jpg. The fact that the first letters spell out “DO IT Q” is interpreted by some as clue confirming that Q is directly connected to Trump.

Also, the headline of the newspaper in front of Trump says: “Princes and tycoons arrested in Saudi crackdown on corruption” – a topic often brought up in Q crumbs.

Finally, this is one of the tweet’s replies: 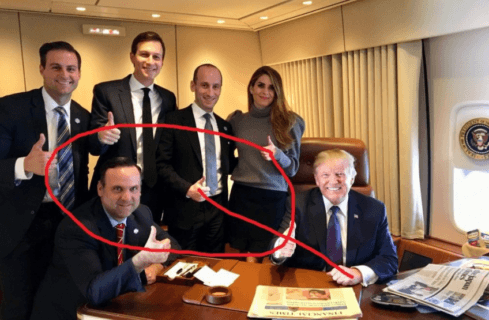 On December 17th, Trump posted a tweet using the words “special place” which was interpreted as another clue. 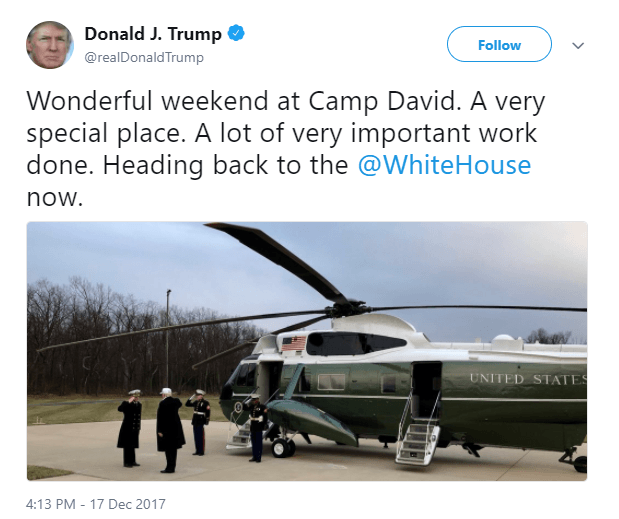 Q often insists on noting the similarity between his posts and the tweets sent out by the POTUS.

On December 12th, Q posted a picture of a pen next to a White House stationery with the message “Merry Christmas”. 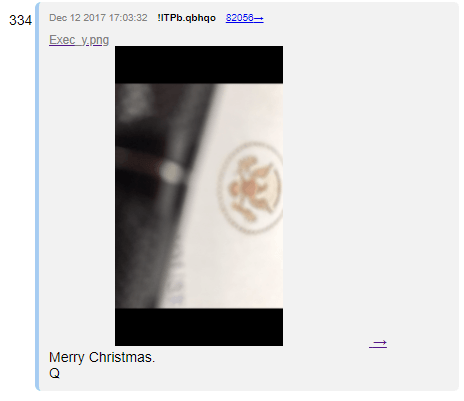 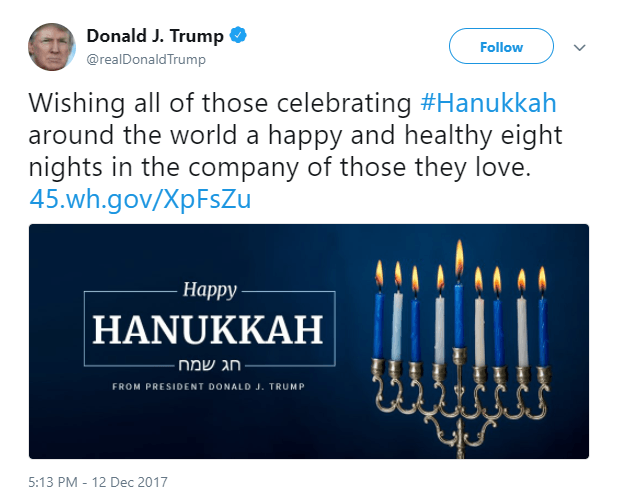 When an 8Chan user highlighted this connection, Q posted another picture of this mysterious pen. 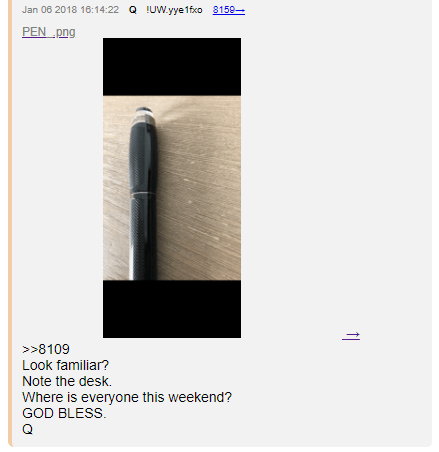 In an interview, the journalist Jerome Corsi believes to have identified the mysterious desk.

The pen is a Montblanc ink pen that Trump has used for a long time. That’s Camp David over the weekend and that picture had to have been taken by somebody who was there with President Trump. His pen on the desk; that pretty much authenticates that QAnon is very close to Donald Trump and present in some of these really important inner circle White House meetings.” 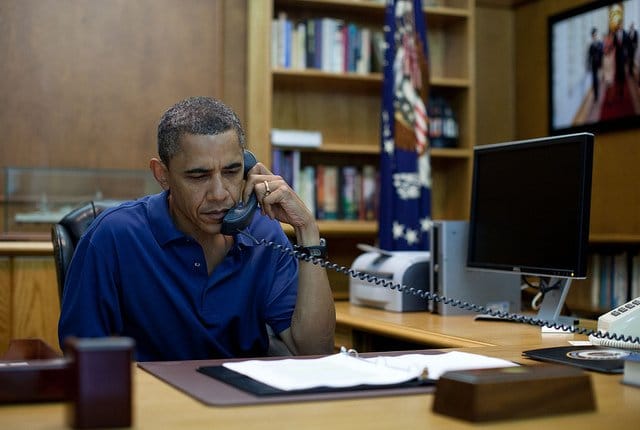 Obama sitting in the Laurel office in Camp David. Is it the same desk?

On January 7th, a Trump tweet contained a mistake where the word “consensual” was used instead of “consequential”.

Although the mistake was corrected a few minutes afterward, it quickly made headlines and was widely ridiculed.

An example of a headline mocking the consensual tweet. 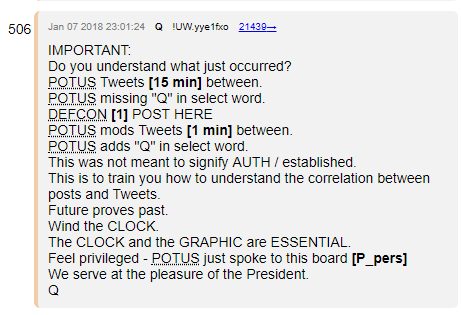 In the evening of December 10th, Q’s drop contained the words Blunt & Direct Time. The next one mentioned “false flag(s)” and “fireworks”.

The following evening, Q explained what he meant by “Blunt & Direct Time”.

BDT is the currency of Bangladesh. Therefore, the crumb implies that Q was aware of the coming “fireworks” and of the nationality of the terrorist.

Several other proofs circulate around The Storm, all of which can be interpreted as undeniable clues from the POTUS himself or mere coincidences dreamt up by overactive minds.

As expected, media coverage about Q is extremely biased, partisan and opinionated. One of the first articles regarding Q appeared in NYmag. The article states:

“A new conspiracy theory called “The Storm” has taken the grimiest parts of the internet by, well, storm. the Storm conspiracy features secret cabals, a child sex-trafficking ring led (in part) by the satanic Democratic Party, and of course, countless logical leaps and paranoid assumptions that fail to hold up under the slightest fact-based scrutiny.”

Newsweek magazine’s coverage of the phenomenon is also extremely critical. The title says it all: “How the Storm Became the Biggest Fake News Story of 2018“.

In March, the Comedy Central show The Opposition With Jordan Keppler poked fun at Q and The Storm.

At the other end of the spectrum, Alex Jones firmly believes in the authenticity of Q. On December 24th he stated:

“A lot of what QAnon has said, I had already gotten separately from my White House sources, my Pentagon sources, my CIA sources.”

Liz Crokin, a journalist for TownHall.com has stated in an interview that she believes that Q might be Trump himself.

“Now, I believe Q is President Trump, working possibly with Stephen Miller, to drop this information behind the scenes to get a campaign going, to red-pill people as to what is going on with The Storm, and their takedown of the Deep State, which includes the Deep State pedophile scene. I’ve been telling people for a very long time the stuff that goes on with these elitists, these occult elitists, who literally are raping, sacrificing children, drinking blood, like eating babies literally. It’s too hard for an average person that has no idea that any of this is going on to take it in all at once.

So there’s been a very orchestrated effort behind the scenes by President Trump and his administration to slowly wake up the public as to what, that A), this goes on, that it’s real, and B), that they’re taking down these people. When there are mass arrests, and there are names like Hillary Clinton that pop up, or thrown in prison for sex trafficking, there’s not mass hysteria. People will realize, ‘Oh my gosh, maybe this is real,’ or like, this isn’t just some kind of coup or whatever, this is real and this is really going on.”

While Q is an extremely polarizing figure, there are facts about the phenomenon that should be obvious to all. First, everything about Q is 100% pro-Trump and in full accord with Trump’s entire political agenda. From a PR perspective, it is an effective and innovative way of bolstering support for Trump while bypassing mass media.

But is this all true? Is Trump truly taking down a network of globalist Satanists? Is this why 90% of the media coverage of Trump negative? Conversely, is The Storm actually a way of gaining the support of “truthers” while, in actuality, no storm is actually happening? Could it be the most elaborate LARP in human history, conducted by a brilliant troll?

One thing is for sure: There is something profoundly messianic about the Q phenomenon. Prophecies of great tribulations and promises of delivering the world from Satan’s followers indeed take on epic, biblical proportions. Through “miraculous” tweets and pictures, Q has converted droves of skeptics into devout followers who are now believers and are ready to spread his word. Q himself adds to this mystique by often mentioning God and quoting the Lord’s Prayer.

So, is Q the real deal? As he says himself, “truth always wins”. Only time will tell if his prophecies of a Final Judgement will come to pass or if he’ll end up being another false prophet.

FacebookTwitterSubscribe
Related Topics:qanonreporttrump
Up Next