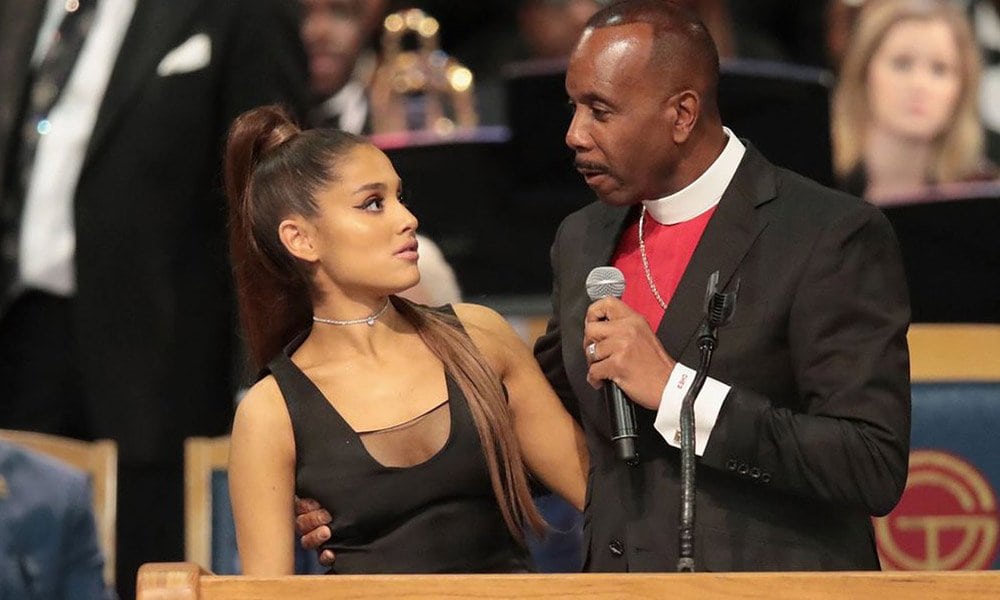 The funeral of Aretha Franklin was a public event that was attended by a slew of celebrities such as Ariana Grande and the Clintons. And they made it weird. Here are some of the things that were wrong about the funeral.

Aretha Frankin was known as the Queen of Soul and the events surrounding her funeral were definitely fit for a queen. The 8-hours long service was streamed by several news networks such as CNN, MSNBC, Fox News, The Word Network and BET. It was lead by Bishop Charles H. Ellis III and was addressed by Rev. Al Sharpton.  Among those who paid tribute to Aretha at the service were Ariana Grande, Bill Clinton, Faith Hill, Fantasia, The Clark Sisters, Ronald Isley, Chaka Khan, Jennifer Holliday, Jennifer Hudson, Shirley Caesar, Stevie Wonder, Eric Holder, Gladys Knight, Tyler Perry, Smokey Robinson, and Yolanda Adams. In short, it was a made-for-media event.

When I saw the picture of Franklin laying inside her casket, legs crossed, while wearing ruby-red 5-inch Christian Louboutin pumps, I sensed that the funeral would be … different. 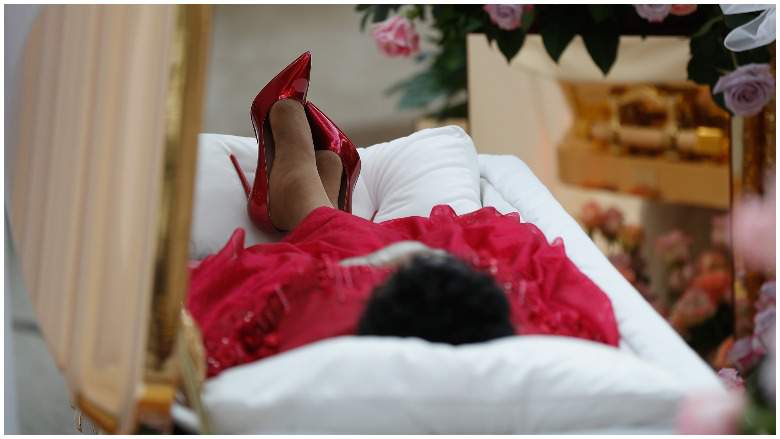 Franklin laying in the casket.

During Franklin’s 4-day “farewell tour”, she wore 4 different outfits, complete with makeup, custom-made earrings and so forth.

At her funeral Bill Clinton even joked:

“I want to say, and I hope God will forgive me, I was so glad when I got here and the casket was still open, because I said, ‘I wonder what my friend’s got on today. I wanna see what the girl is carrying out.”

One can argue that Aretha would have approved of this funerary display based in style, fashion, and luxury. She lived as a diva so it is only normal that she would “depart” as a diva, right? I guess, I have no idea.

However, I’m pretty sure she wouldn’t have approved of the other incidents that occurred at her funeral and the mass media response to it. Here are some of the things that were just wrong with the funeral.

Using Her Death for Politics

During her funeral, a lot of people said a lot of things and even more people complained about the things that were said.

First, Trump’s tribute to Franklin featured the most Trump sentence ever:

“I knew her well – she worked for me on numerous occasions.”

“Then this orange apparition had the nerve to say she worked for him. You lugubrious leach, you dopey doppelgänger of deceit and deviance, you lethal liar, you dimwitted dictator, you foolish fascist. She [didn’t] work for you, she worked above you. She worked beyond you. Get your preposition right. Then he [has] the nerve to say he’s going to grab it. That’s not what Aretha Franklin said. I’m going to give you something that you can feel.” 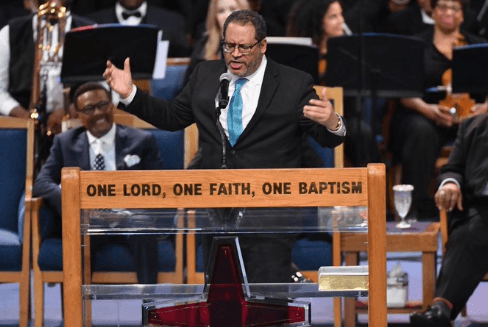 Jesse Jackson, who ran for president as a Democrat in 1984 and 1988, also had a political message.

“We have long lines to celebrate death, and short lines for voting. Something is missing. If you leave here today and don’t register to vote, you’re dishonoring Aretha.”

Then, there was the 50 minutes-long eulogy by Rev. Jasper Williams Jr. It was long, fiery and contained strong opinions that were definitely not “politically correct”. As expected, it caused a lot of “ire and concern” in mass media. 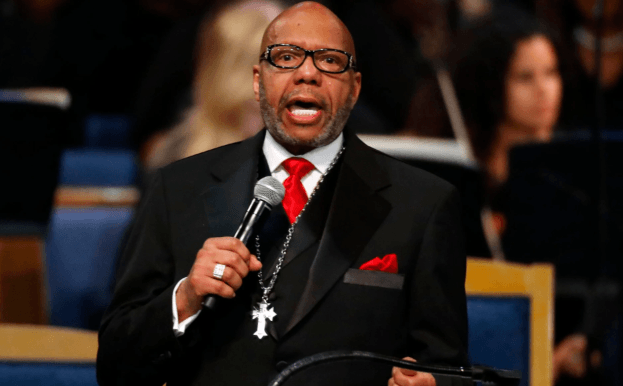 Rev. Williams is a long-time friend of the Franklin family and was hand-picked to eulogize Aretha Franklin. Williams also preached during the service for Aretha’s father Rev. C.L. Franklin in 1984.

After speaking on Aretha Franklin’s life, Williams addressed a slew of issues that some found to be controversial. For instance, he talked about women not being able to raise men on their own.

As he railed against broken homes, Williams used the term “abortion after birth” to describe the situation of children being raised without a father or mother.

He then went on to explain the importance of having a household that is comprised of both a man and a woman.

“Anytime we stray away from God’s design for what the home is supposed to be, heavy will be our results.

God has told us what to do with our home. He designed the home. I mean God put in a home a man and a woman, a father and a mother. God put in the home a husband and a wife. A provider and a nurturer.”

He then took aim at the Black Lives Matter movement:

“It amazes me how it is that when the police kills one of us, we’re ready to protest march, destroy innocent property. We’re ready to loot, steal whatever we want. … But when we kill 100 of us, nobody says anything. Nobody does anything.

It did not take long before news articles and social media influencers bashed the eulogy. 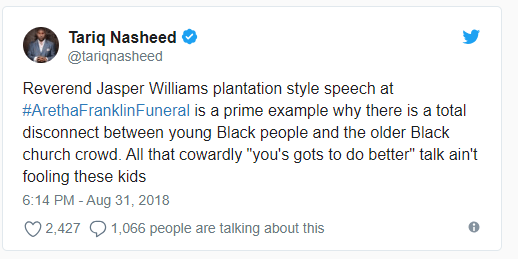 Clearly, this old-school reverend ruffled some feathers. His eulogy was deemed “a disaster” and many questioned why he was chosen to speak. Well, the answer is: He was a close friend of the family. The real question is: Does every single media event now needs to be tainted with political debates and calls for censorship? I mean, it was a funeral.

Everything about Ariana Grande’s presence at the funeral was off-putting. It was as if it was scripted to derail the funeral and to make it “occult elite”.

Brushing with the elite.

First, it should be mentioned that Grande’s latest single is called God is Woman. The video is based on the rather blasphemous concept of her replacing God through sexuality – a reference to the occult concept of Sex Magick. Therefore, her being in the “House of God” for this service was already questionable.

Additionally, many found Grande’s dress inappropriate for the occasion as it broke the unofficial church rule of “below the knee”. 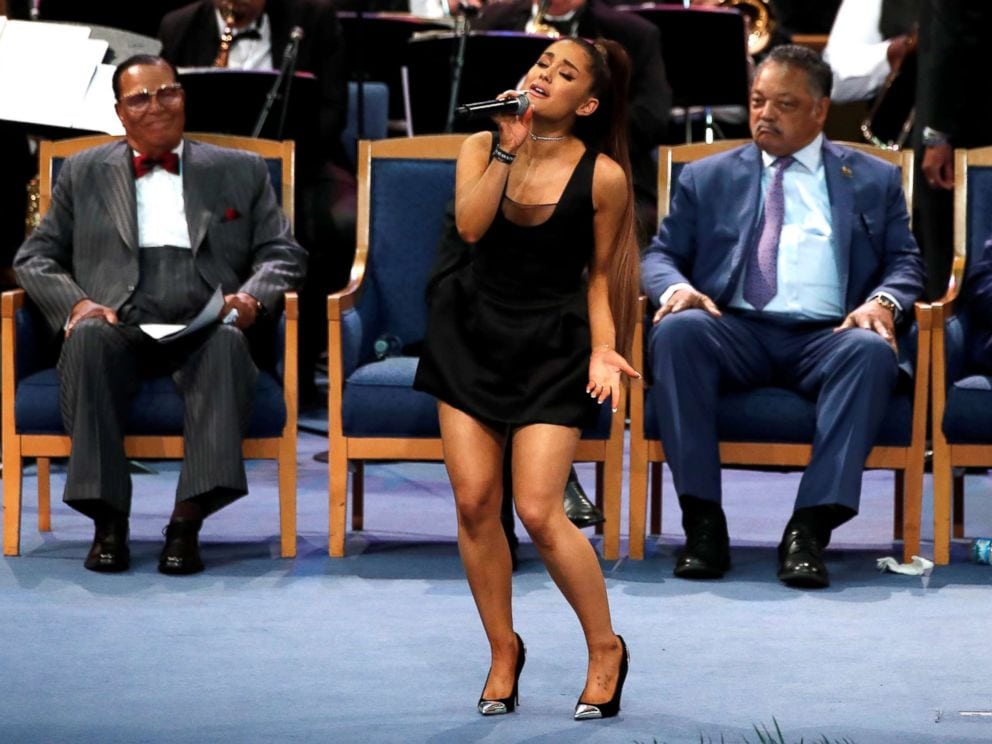 Smokey Robinson, who was at the funeral told TMZ about the dress:

“She’s a young woman and she’s doing her young thing, and I think it was inappropriate. I do.

I love her, I think she’s a great talent (but) somebody in her camp should have told her she was at a funeral and not let that happen. I don’t think she was trying to be disrespectful… It was just inappropriate.”

Once again, instead of celebrating Aretha Franklin’s life in the sacred context of a church, things turned into Hollywood weirdness. For instance, it did not take long before pictures and videos of Bill Clinton salivating over Ariana’s behind went viral. 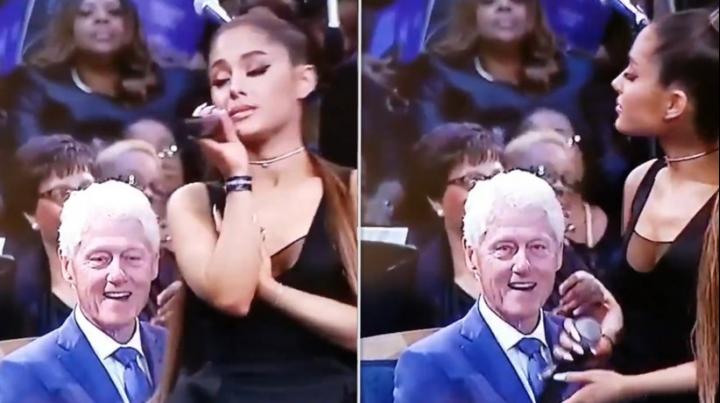 Then, Ariana stood next to Bishop Charles Ellis III. After joking about her name sounding like an item at Taco Bell, the bishop held his arm around her and his fingers pressed against the side of her chest. He was quickly accused of groping Grande and this incident became the “highlight” of the religious service. The hashtag #RespectAriana became viral. 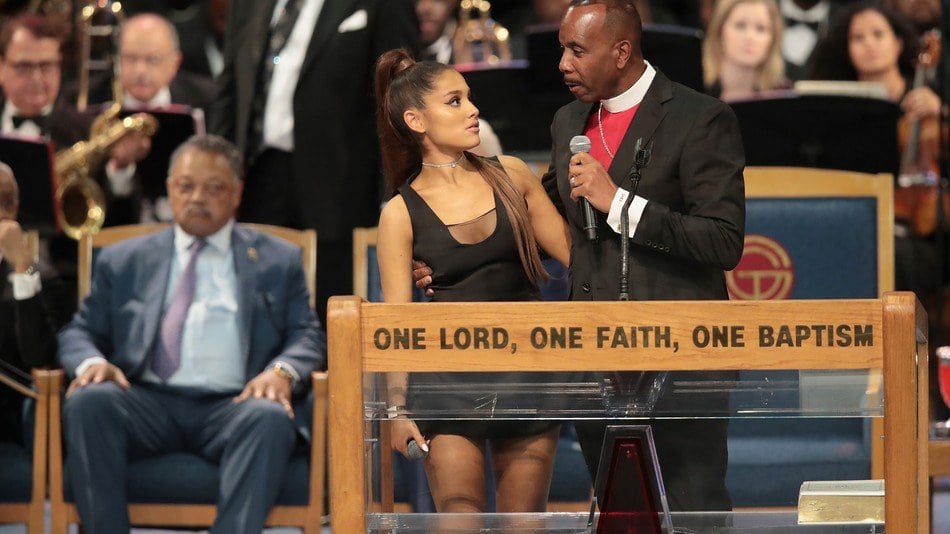 The Bishop grabs Ariana while the words “One Lord, One Faith, One Baptism” are prominently on display.

The next day, Ellis apologized for “crossing the border” and added:

“The last thing I want to do is to be a distraction to this day. This is all about Aretha Franklin.”

Well, that’s what happened. This religious service, taking place inside a church, turned into a story of old men lusting over a pop star who is styled to look like a 14-year old girl.

Aretha Franklin was the daughter of a preacher and grew up singing gospel songs. This aspect of her upbringing followed her throughout her life and, of course, it had to be reflected at her funeral. On the other hand, Franklin’s career truly took off when she began singing “secular” pop songs – a move that met her father’s disapproval. When she became the superstar, Franklin became rich and famous and brushed with the higher-ups of the music industry and the world elite.

The dualistic nature of her life and career were also present at her funeral as a traditionalist Baptist church service clashed with the “immorality” of Hollywood. The resulting product was a long, bizarre event laced with controversy.

Asia Argento Was Accused of Sexual Assault on a Minor: Not Surprising