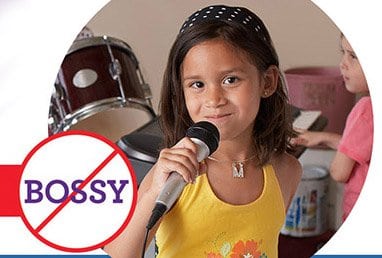 Lean In, an organization created by Facebook COO Sheryl Sandberg launched a campaign to ban the b-word. And by that I mean the word “bossy”. To do that, the organization recruited Beyoncé (who’s often involved in elite-funded campaigns), Jennifer Garner and political figure Condolezza Rice. In a cringe-inducing video, they’ve all “committed” to ban the word.

The video supposedly aims to encourage girls to become leaders. Instead of, like, encouraging girls to become leaders, the video actually says: “Let’s just ban the word bossy”. Really? That’s pretty bossy of them. Telling us what words to use and not to use. I’ve known quite a few women who were leaders but who were NOT bossy. They were great leaders with tact and vision who did not feel the need to boss and micro-manage people around because they could. I’ve also known women who were not leaders of anything but were nevertheless bossy. BOSSY. That’s the word to describe that type of person. Deal with it.

But seriously, when I heard about this campaign the first thing that immediately came to mind was the book 1984 and Newspeak. If you are not familiar with this book, here’s George Orwell’s description of Newspeak in the novel’s appendix.

Newspeak is the official language of Oceania, scheduled for official adoption around 2050, and designed to make the ideological premises of Ingsoc (Newspeak for English Socialism, the Party’s official political alignment) the only expressible doctrine. Newspeak is engineered to remove even the possibility of rebellious thoughts—the words by which such thoughts might be articulated have been eliminated from the language. Newspeak contains no negative terms. For example, the only way to express the meaning of “bad” is through the word “ungood.” Something extremely bad is called “doubleplus ungood.”

In short, in the 1984, Newspeak was developed by the Party to restrict human thought. When there is no word to describe an idea, the idea cannot even take form. In this sense the Ban Bossy campaign appears to take a page right out of 1984. In a broader sense, it is about using feminism to restrict, oppress and re-mold. It is not about equality, it is about creating, in the words of 1984 “thought criminals” and restricting language.

While I believe this superficial, mind-numbingly ridiculous campaign will fail miserably, there is nevertheless a great deal of financial and political power behind it.

As stated above, Lean In was created by Sheryl Sandberg an important figure of the power elite. Before becoming the COO of Facebook, she was Vice President of Global Online Sales and Operations at Google. Before that, she was chief of staff for the United States Secretary of the Treasury. More importantly, she is part of the Brookings Institution and the Council of Foreign Relations – two of the most important elite think tanks in the world. These two institutions alone are responsible for most of the  New World Order-friendly policies adopted by governments today. Sandberg also attended the 2012 Bilderberg meetings which is, as you might know, another elite hotspot.

Ban Bossy is therefore the product of an elite-funded organization which uses feminism as a means of control. To “empower” means to give power. Banning words is the opposite of giving power.

In other news “bossy” is the word of the day. Use it as much as you can today. Here’s a video that goes with the spirit of the day.

FacebookTwitterSubscribe
Related Topics:illuminati commercials
Up Next