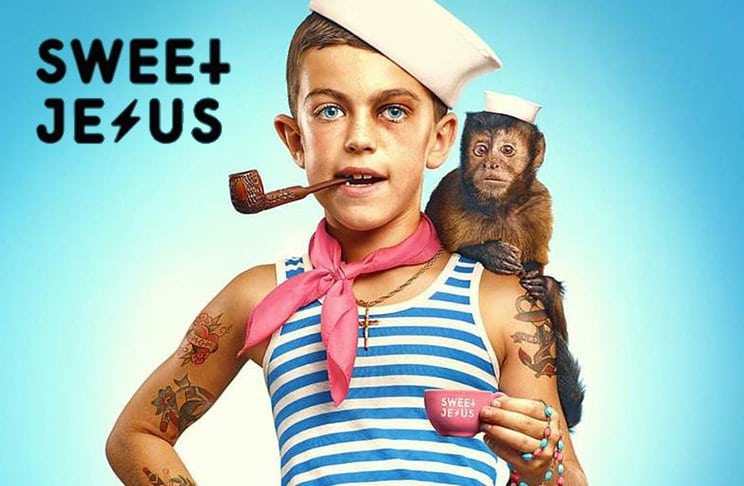 The marketing surrounding Sweet Jesus is based on satanic symbolism combined with children in creepy and questionable situations.

Sweet Jesus is an absurdly popular ice cream chain that’s been around for a few years and is quickly expanding in Canada and the United States. Deemed “Toronto’s Most Overrated Ice Cream” by the Globe and Mail, Sweet Jesus nevertheless attracts huge crowds on a daily basis. The chain has been enjoying lots of media coverage and because its stores are custom-made to be “Instagrammable”, Sweet Jesus is all over social media.

The chain does not only serve ice cream to its customers: The “experience” also involves intense imagery and Biblical references. This peculiarity even prompted a lengthy article on Medium that analyzes the “Christian symbolism” of the shop. While the article is very in-depth and used all kinds of references, it completely missed one point: The symbolism is not Christian, it is satanic. Because satanic symbolism is based on the inversion and the corruption of Christian symbols and Biblical references. 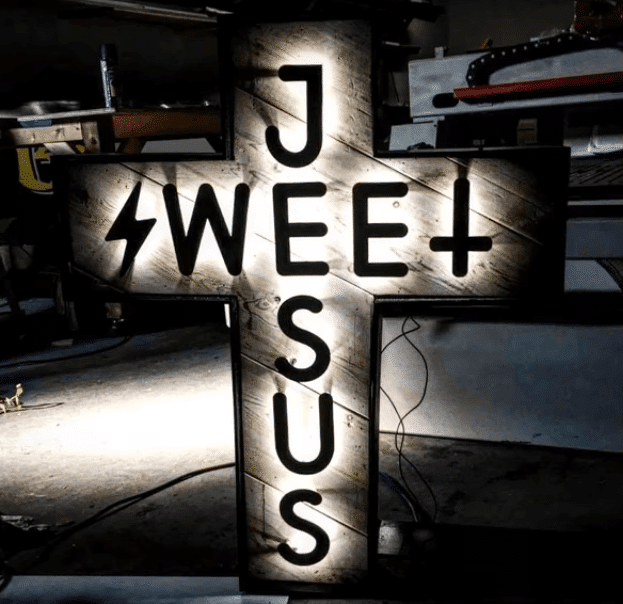 The logo consists of the words Sweet Jesus combined with two satanic symbols: An inverted cross and a lightning bolt.

These two symbols are an important part of the imagery of the Church of Satan. 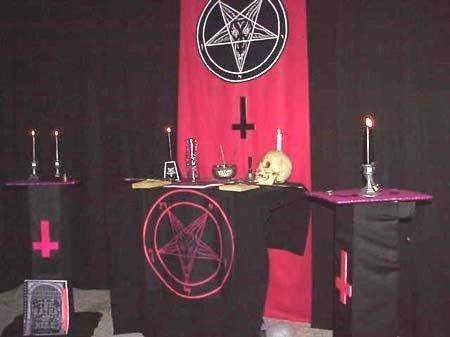 An altar of the Church of Satan with inverted crosses.

To those who say: “The inverted cross is not satanic, it is actually the Cross of St Peter. I read that on Wikipedia”. Nope. In this context, it is satanic. Satanic Black Masses are all about the inversion of Christian symbols to represent a diametrically inverted philosophy.

The symbol of the lightning bolt is also prevalent in satanism. It most likely originates from the Bible passage where Jesus said: “I saw Satan falling like lightning from heaven”. 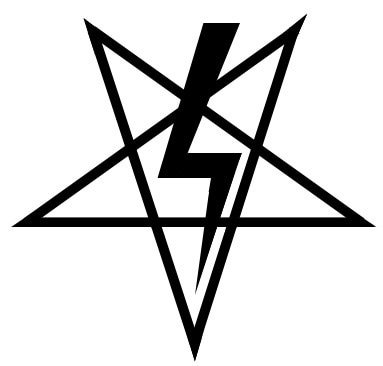 The sigil of Anton Lavey (the founder of the Church of Satan) features a lightning bolt inside an inverted pentagram. A sigil is a symbol used in ceremonial magic to represent the magician’s outcome (and to summon demons). 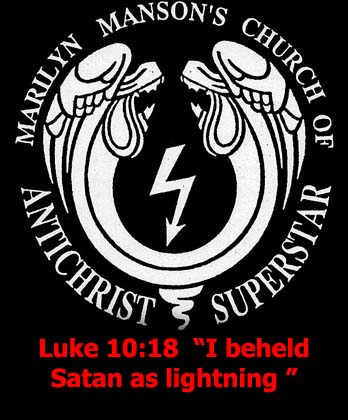 A Marilyn Manson promo poster. He’s a member of the Church of Satan.

These two symbols make up the logo of Sweet Jesus. 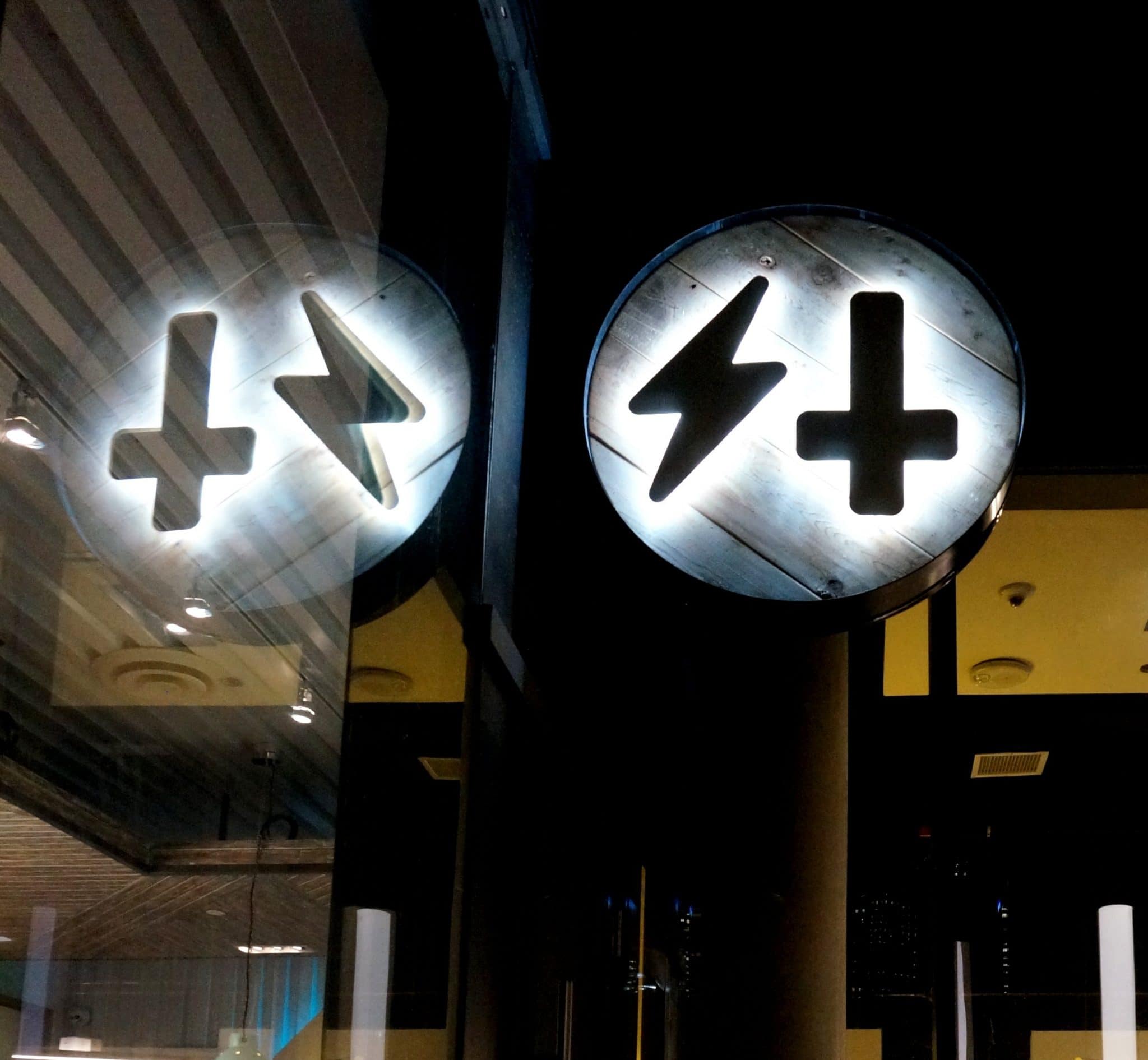 The Sweet Jesus logo in front of a shop. 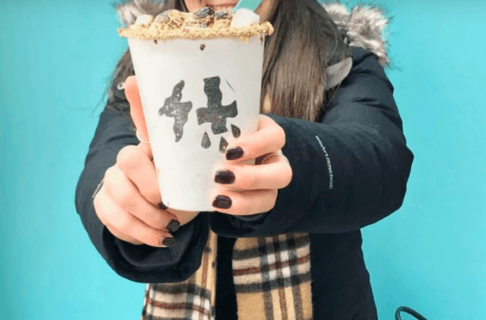 It’s also on their cups 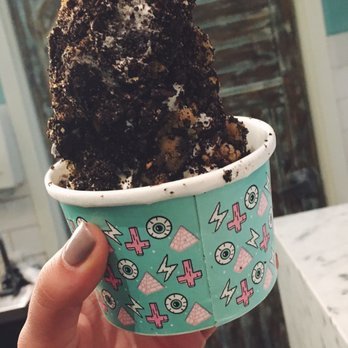 The marketing of the brand is all about ridiculing Jesus combined with satanic symbolism. 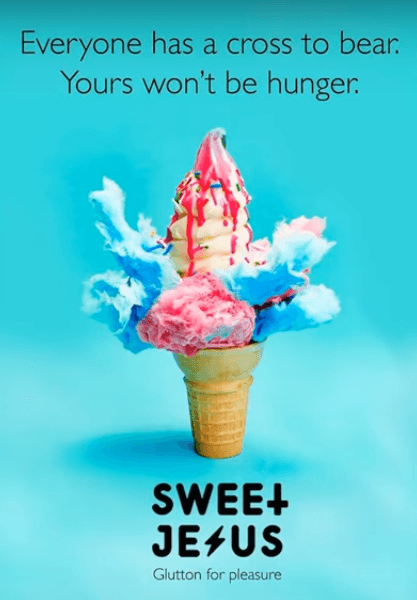 That’s funny because Jesus bore his cross before he got crucified. Also, gluttony is considered to be one of the seven deadly sins by some Christian denominations. 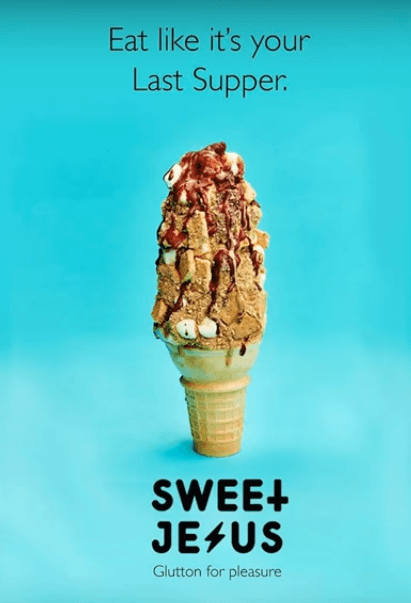 That’s funny because Jesus … whatever. 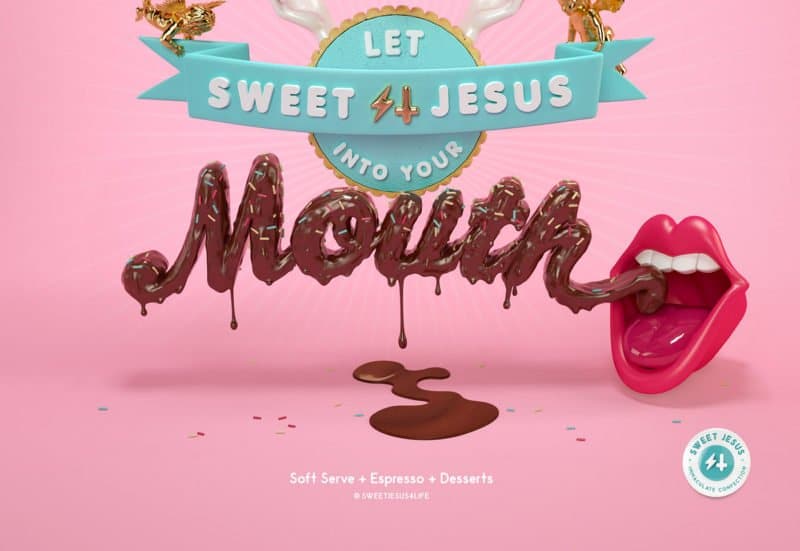 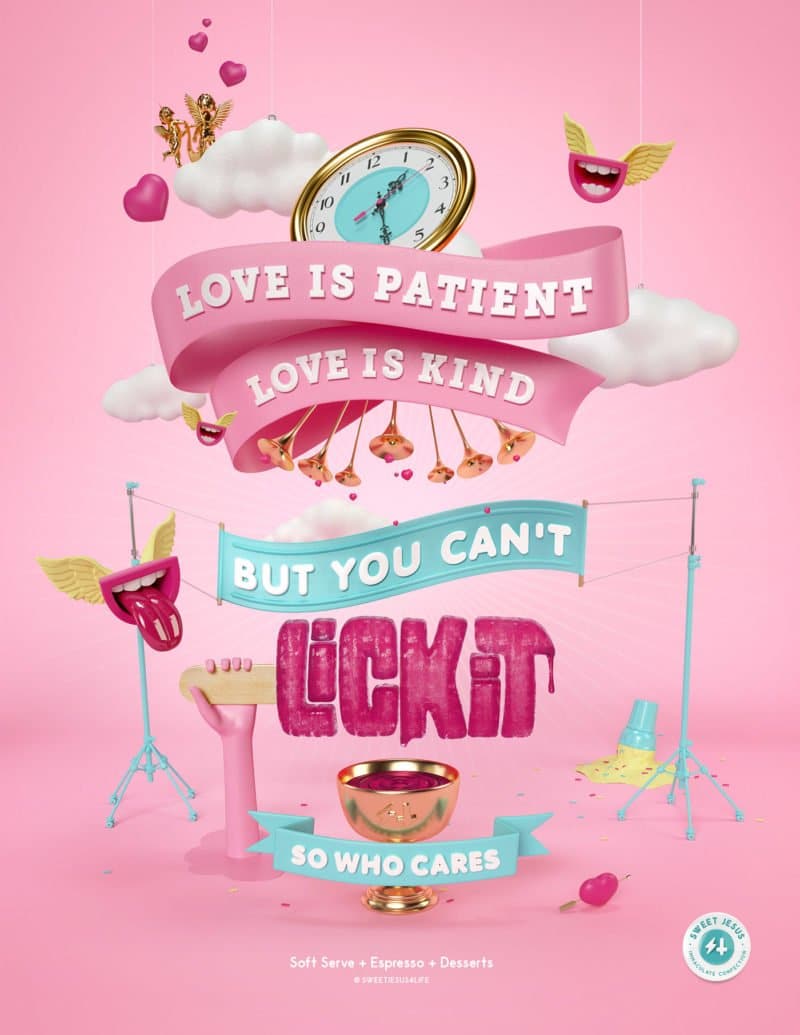 “Love is patient, love is kind” is the beginning of a popular Bible verse. It is followed in this ad by “but you can’t lick it so who cares”. The popsicle stick is held in a phallic matter. There are satanic symbols on the chalice. 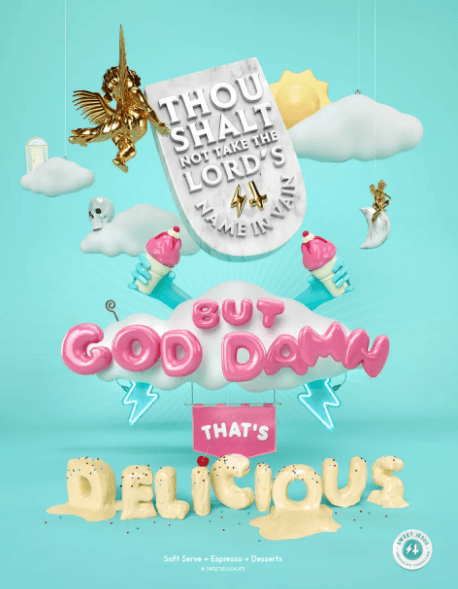 Here’s another project by the same graphic designer. Since it is not an ad selling ice cream, it is a little more blatant. 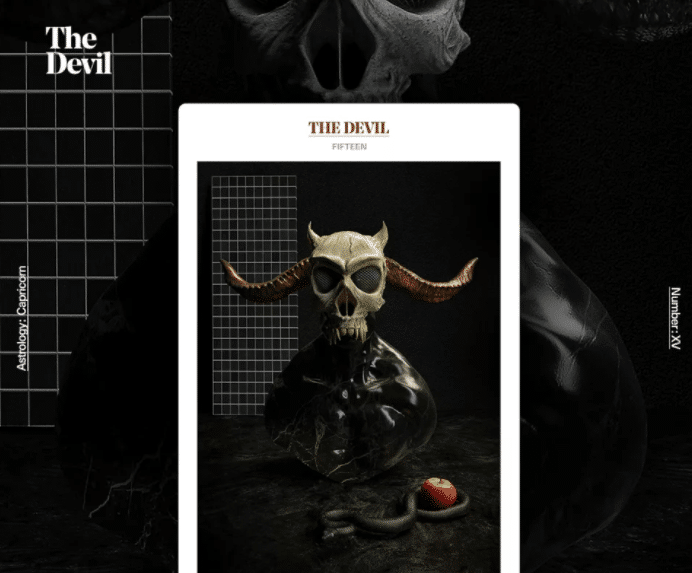 Although none of this would EVER exist if it ridiculed any other religion, one can still dismiss the above as an attempt at being “edgy and clever”. However, there’s more.

Sweet Jesus also created ads involving children. And they’re evil creepy. Not fun creepy. They confirm that this is not simply about being “edgy” … there’s a connection with the darker, more sinister side of the occult elite: Preying on children.

Most of the marketing surrounding Sweet Jesus involves fashion magazine-style photoshoots involving children and ice cream. One might think: “Well, that’s normal enough, right? Children love ice cream.” But these pictures involve children in a creepy way. At best, the pics “adultize” children. At worse, they sexualize them. 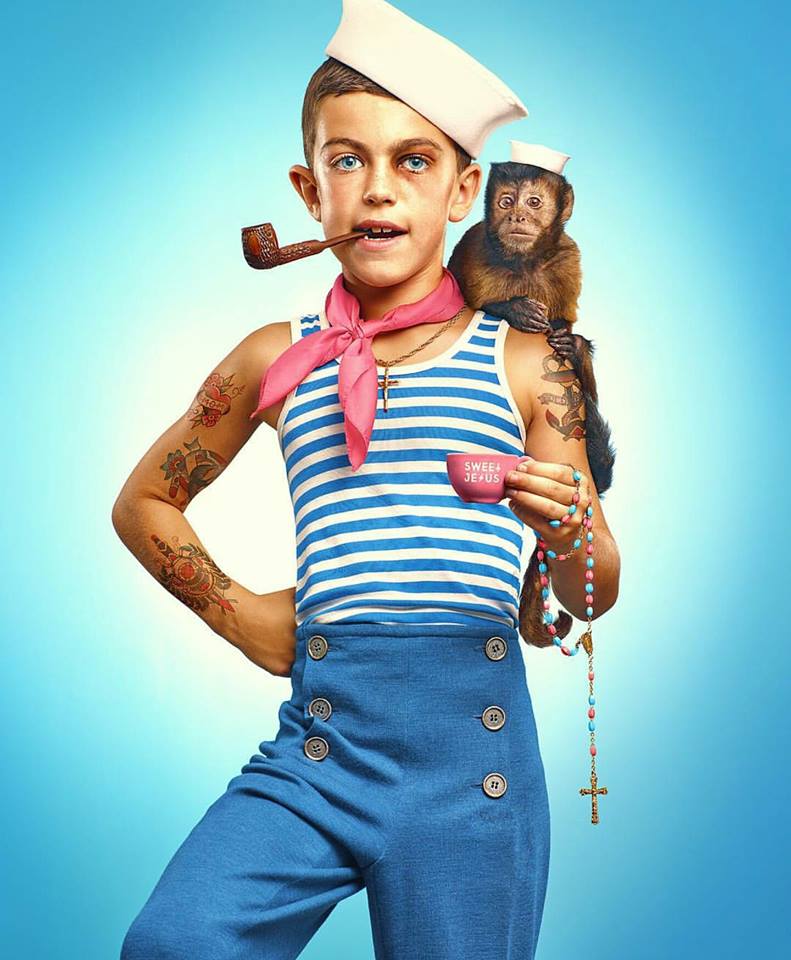 This kid is dressed like a sailor and he’s doing all kinds of adult things: Smoking, wearing tattoos, drinking coffee from a cup with a satanic logo. But, more importantly, why does the kid have a bruised eye? Child abuse? 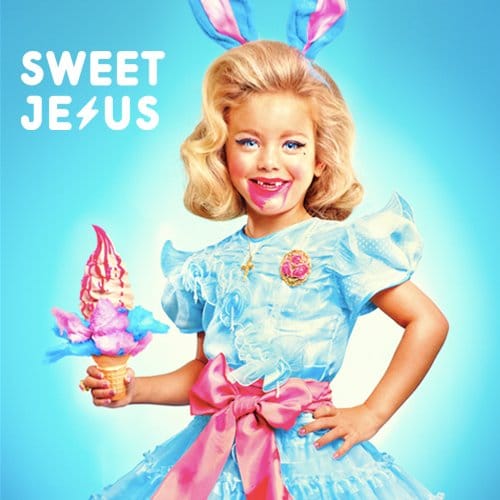 This picture is very creepy. First, the entire thing is reminiscent of the horribly exploitative world of child pageants. This blond girl looks eerily similar to JonBenet Ramsey – the child pageant star who got savagely murdered in bizarre circumstances. Also, the girl has pink stuff around her mouth reminiscent of blood. To make things even more disturbing, the girl has bunny ears – not unlike Playboy bunnies. 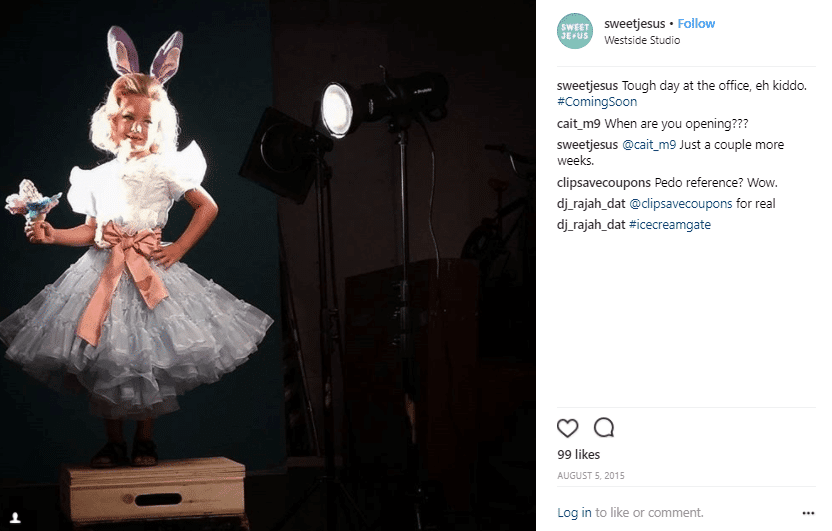 The company’s IG page featured this “behind the scenes” pic of the above picture, along with the borderline creepy comment “Tough day at the office, eh kiddo.”. The other comments got real.

These guys! (This is a picture from the Church of Satan website). 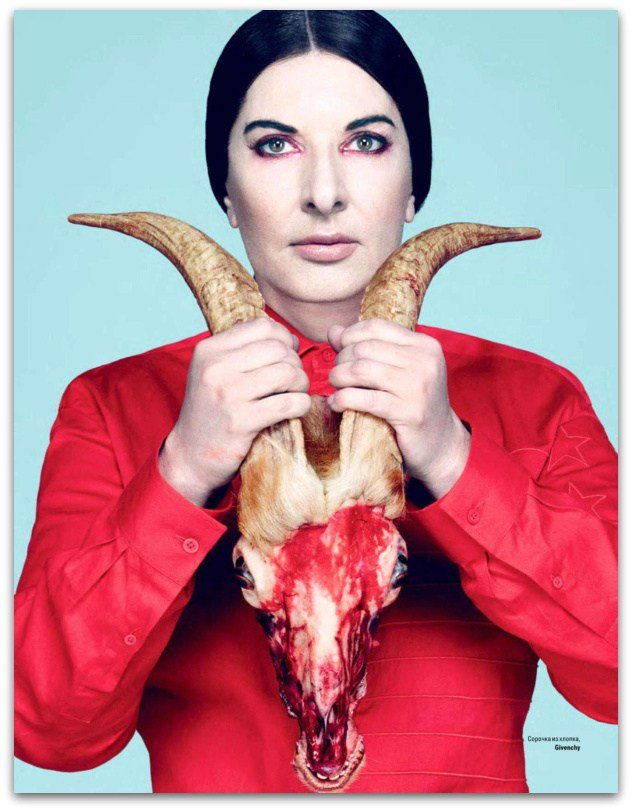 This girl has a “crown” made of what looks like tiny antlers. She looks like she has blood all over her hand and she is also sucking on her thumb. No. 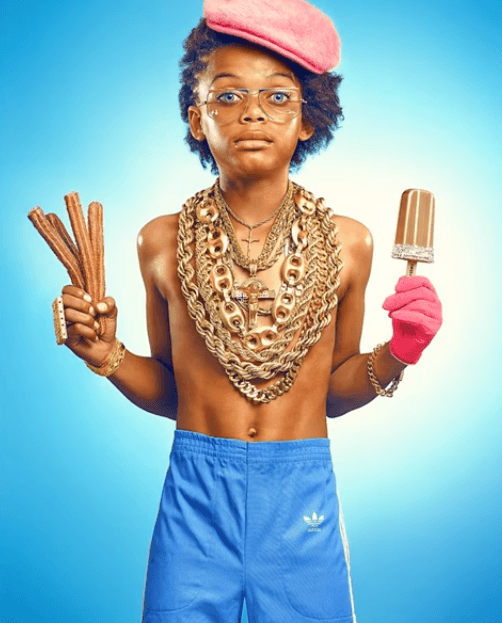 A shirtless kid. He has the satanic symbols right on his glasses. Nope. 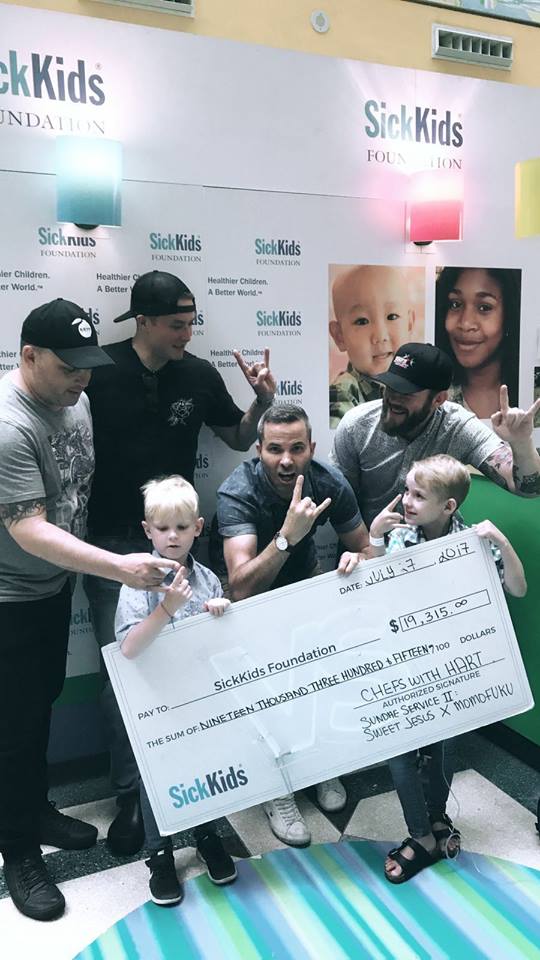 People from Sweet Jesus donating to “Sick Kids” … Not before they teach the kids how to throw up the devil horns, though.

Associating the decadence of deserts with the devil is nothing new. However, Sweet Jesus takes thing way further. It is not simply about “edgy images”, it is about an entire culture that is perfectly in line with the occult elite.

As seen in previous articles on this site, a main agenda of the occult elite is the normalization of powerful satanic symbolism, which is based on the corruption and desecration of Christian symbols. But that’s just the surface of it. The marketing of Sweet Jesus also subtly implies the corruption and desecration of children. This is where things stop being “cool and edgy” and the ugly head of pure evil sticks out.

And there’s nothing sweet about it.

An Objective Analysis of the QAnon Phenomenon