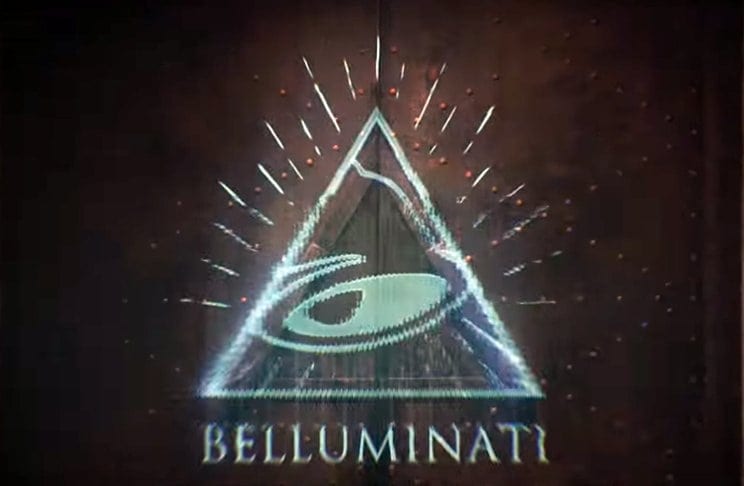 Taco Bell released a couple of ads entitled “Belluminati” which feature a creepy secret society and a flurry of Illuminati symbolism. Is this a case of “brilliant marketing” or is the elite flaunting its power in plain sight?

Taco Bell is mostly known for its cheap, diarrhea inducing, pseudo-Mexican food. Indeed, it is the best place to be to eat delicious Grade F mystery meat topped with mouth-watering “American-cheese-flavored-melted-food-product”. Oh, the joys of hearing one’s stomach rumbling after only a few bites of Doritos-flavored tacos – these desperate calls for help from a distressed digestive system – these warning signs of an upcoming bathroom cyclone! Indeed, it does not take long for a healthy stomach to realize that this influx of taco meat is actually poisonous and, in an attempt to preserve general health, sends everything flying out the rear end.

This mild inconvenience does not stop millions of customers from stopping at their local restaurant and ordering a mountain tacos. ¿Por qué?, might you ask? Well, this is where the poopoo jokes stop and things get real. Taco Bell is not a joke – it is part of a gigantic, tentacular mega-corporation that feeds a great portion of the world. And those who own it are extremely powerful.

What is Taco Bell?

“As the world’s largest restaurant company, Yum! Brands, Inc. has over 43,500 restaurants in more than 135 countries and territories and more than 1.5 million associates worldwide. The Company’s brands – KFC, Pizza Hut and Taco Bell– are the global leaders of the chicken, pizza and Mexican-style food categories.”

A banner promoting Yum! Brands found on the company’s LinkedIn page. It literally says that it is feeding the world.

Strangely enough, in 2011, I published an article entitled Irrational Consumerism (or The Few Companies That Feed the World). In this extensive article, I mention Yum! Brands and its former parent company PepsiCo, listing the great number of food brands it owns such as Doritos, Quaker, Gatorade, Aquafina and, of course, Pepsi. 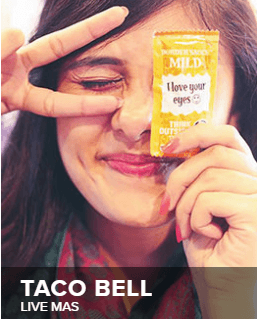 Taco Bell’s parent company is 100% owned by the world elite. Its owners are part of supra-national elite organizations such as the Trilateral Commission, the Council on Foreign Relations and the Bilderberg group. The company’s gigantic budget, political influence, and stronghold on agricultural production strongly influence how food is produced and how people are fed.

“The degree of concentration in the fast food industry means that corporations can assert a great deal of control over prices of inputs and outputs and therefore, profits. For example, farmers and ranchers in the US find themselves getting “Third World” prices for their products. This is because giant food processing companies can impose low prices on the direct producers, because government subsidies keep farmers afloat, and because an increasing share of the total value of the food goes not to the primary producers but to the middlemen and those who carry out the ever-greater processing of food. Since humans tend to crave sugar, fat and salt, ‘value-added’ processing essentially means the addition of inexpensive but semi-addictive inputs. The profits of the food processors increase dramatically as people become addicted to ever-greater quantities of food high in ’empty calories’. (…)

Yet, Americans continue to eat fast foods. Is it because they are unaware of the impact of fast foods on the health of humans and the environment? This is perhaps one reason, but here are some others:

The Vigilant Citizen has been around for ten years. It was online before the “Illuminati” thing turned into a mainstream meme and it is still here today as the trend fades away. At the beginning of this decade, a generation of people discovered that the symbols surrounding them actually bear a deep symbolic meaning and revealed the true nature of those in power. This simple, very verifiable truth brought a new era of public awareness and a new taste for research and truth-seeking. Of course, the elite hated everything about this. It did not take long before mass media pawns muddied the waters and turned all research concerning the occult elite into a dumbed-down, cartoonish, joke. The campaign worked as planned: The word “Illuminati” (which has been around for centuries to describe an actual secret society) is now automatically associated with stupid memes by most people.

The Belluminati commercials are a continuation of that effort. The ads use actual facts, symbols, and concepts associated with the elite to turn them into a joke while selling $1 garbage to the masses. Let’s look at what is going on there.

First, the Belluminati logo is the Taco Bell logo inside a triangle.

The logo addresses the several-years-old theory that the inside of the Bell is actually a reptilian eye. 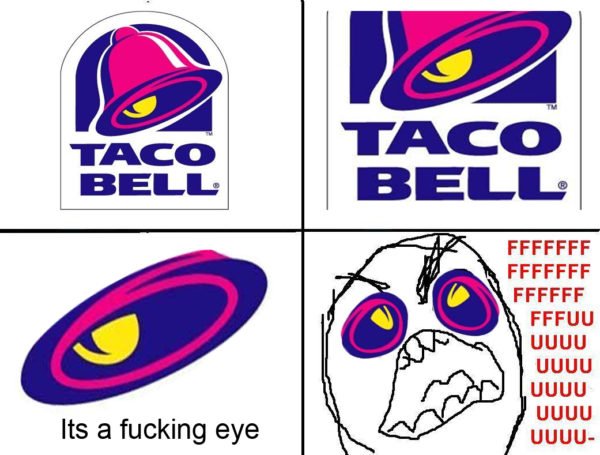 An old meme about the logo.

The ad begins by showing a weird old guy with glowing eyes.

The old man is a transhuman – a human merged with a robot. Transhumanism is an important part of the elite agenda.

The transhuman scans the bill, highlighting a pattern above the Federal Reserve Seal on the bill. Also, the Taco Bell eye appears on the face of George Washington.

Inside, the Belluminati meeting place is filled with masked and hooded figures and is similar to Eyes Wide Shut-type balls the elite love to host.

The party looks like an Illuminati-themed music video, complete with the logo projected on a red drape. There’s a person wearing a sunray crown (reminiscent of esoteric iconography) and, to the left, a horned animal head that is somewhat reminiscent of Baphomet. Also, they’re eating burritos. Hope the bathrooms are close by.

Here, mysterious people in red cloaks overlook a hologram of the earth – implying that they’re secretly ruling the world. The ceiling design above the globe forms a six-pointed star, aka the Star of David, aka the Seal of Salomon.

Prominently featured at the ball is a striking painting of George Washington doing the Roc sign popularized by Jay-Z.

The Roc sign is often mentioned on the Vigilant Citizen as it represents an attachment to the occult elite. 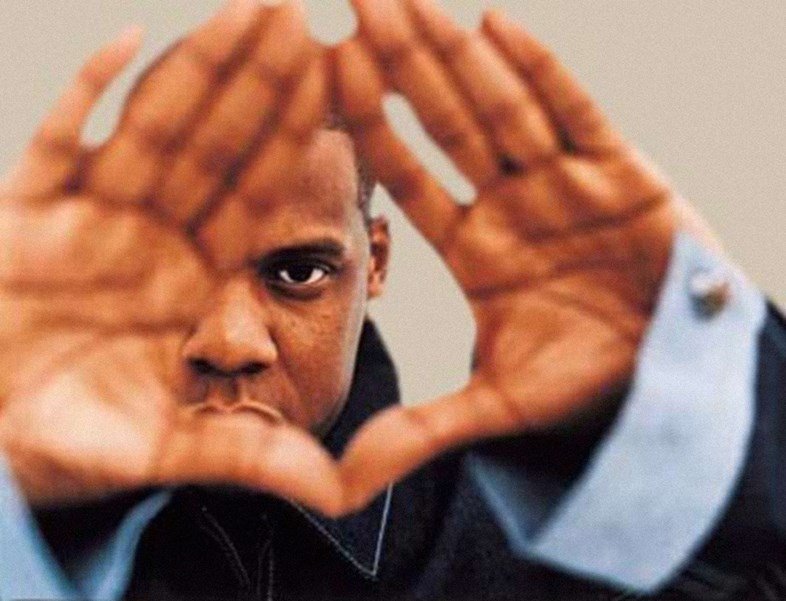 Jay-Z doing the Roc sign with his eye inside the triangle, effectively forming the Illuminati symbol. The Roc is short for Rockefeller – one of the most prominent families of the world elite. 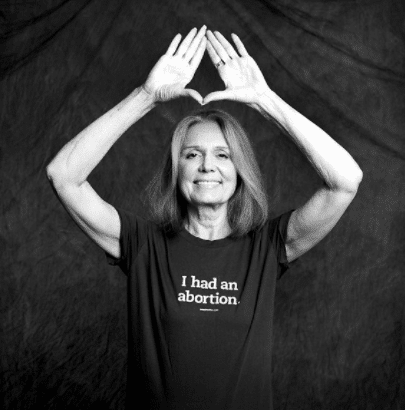 The sign also appears in strange, non-Roc-related places such as this picture of Gloria Steinheim in a pro-abortion campaign.

The hand sign is known as Kohanim hands of Priestly Blessing in Judaism.

One might think: “LOL they made George Washington throw the Roc sign that’s funny and there’s nothing more to it LOL”. Yes, this is indeed hilarious. I choked on my burrito when I saw that. However, George Washington was actually a high-level Freemason and most of the art representing him is replete with Masonic symbolism. 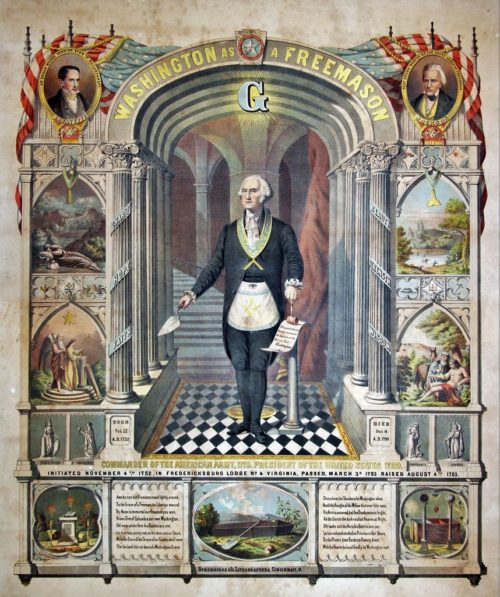 The engraving “George Washington as a Freemason” features the US’ first president surrounded by every single Masonic symbol known to man.

Although the Washington painting is a joke, it is also not a joke. He was actually a high-ranking member of a prominent secret society. His entire life and legacy were deeply influenced by Masonic principles.

Here’s another item that is deeply influenced by Masonic principles: The Great Seal of the United States. 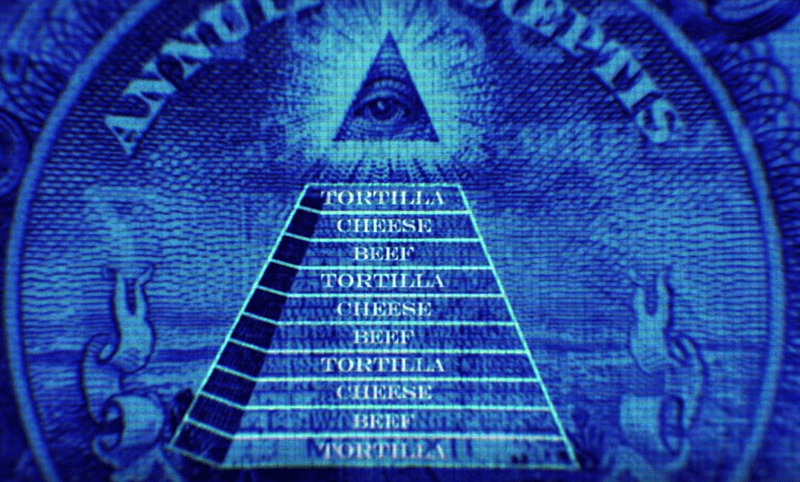 The commercial shows the unfinished pyramid on the dollar bill, highlighting each step with words such as “tortilla”. The shot pokes fun at the “theories” surrounding the number of steps on the pyramid.

Regular people watching this ad might think “LOL at these conspiracy theorists counting the steps on the pyramid!”. While these people get their education from Taco Bell ads, books written by knowledgeable people do exist and they clearly explain the meaning of these symbols. Manly P. Hall, a 33rd Degree Mason, and prominent occultist describes the Great Seal of the United States:

The significance of the mystical number 13, which frequently appears upon the Great Seal of the United States, is not limited to the number of the original colonies. The sacred emblem of the ancient initiates, here composed of 13 stars, also appears above the head of the “eagle.” The motto, E Pluribus Unum, contains 13 letters, as does also the inscription, Annuit Coeptis. The “eagle” clutches in its right talon a branch bearing 13 leaves and 13 berries and in its left a sheaf of 13 arrows. The face of the pyramid, exclusive of the panel containing the date, consists of 72 stones arranged in 13 rows.”
– Manly P. Hall, The Secret Teachings of All Ages

Once again, the ad pokes fun at people who actually know about their own history.

The goal of every marketing person is to create ads that become viral and that get people talking. Taco Bell obviously succeeded and, yes, this article adds to the discussion. However, there is more at stake here. Not unlike my previous articles analyzing ads, lots of commercial spots made by major brands do not simply sell a product, they sell the agenda of those who own the companies.

For years, there has been an obvious mass media agenda to discredit all “Illuminati”-type research and to ridicule those who discuss it. Furthermore, there’s a clear effort to spread disinformation to make the entire subject utterly confusing. The Taco Bell ads are part of this agenda. By mashing together various Illuminati symbols with taco-related jokes, the ads “fictionalize” the entire subject causing regular, unaware people to associate everything that was depicted in the ads as pure fantasy. Furthermore, under the guise of ridicule, the ads actually expose the masses to more of the symbolism that’s been highlighted on this site for years, shamelessly putting it in plain sight and making it part of popular culture. In short, the Taco Bell ads are diarrhea for the mind.