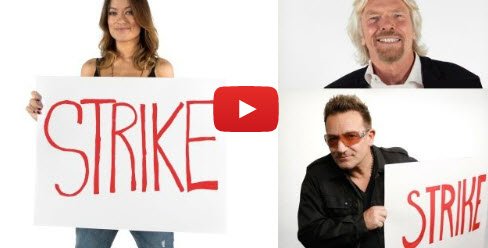 In February, Matt Damon launched a campaign to raise awareness about the lack of clean water in third world countries. While this is an important and noble cause, an ad promoting it featuring Bono, Richard Branson and Olivia Wilde pretty much focuses on something else: Ridiculing Illuminati-related conspiracies. Why? Nobody really knows.

This video about clean water ends with billionaire Richard Branson yelling: “Illuminati assemble!”. What’s the relation? Dunno. Is this supposed to be funny? Well, I didn’t laugh. My right eye is slightly twitching, though.

In less than a two minutes, the ad manages to annoy me on a several levels. First, it is yet another example of celebrities trying to get some precious PR goodness by associating their “image” with some kind of good cause. Instead of like, shutting up and helping people on the low, they rather get in front of a camera and tell regular people: “Hey! I’m a celebrity and I’ve got money, look at how great I am because I care about this latest Hollywood good cause trendy thing… And you’re selfish jerk for not caring!”

Second, everyone probably went to the bathroom RIGHT AFTER shooting the video. Isn’t basing a celebrity campaign around an action nobody will ever actually accomplish just representative of the hypocrisy going on there? It’s like an indirect way of saying: “We’ll do absolutely nothing about this issue expect running our mouth and prove we’re better than others for caring”.

What’s however most mind boggling is that the celebs in the ad don’t seem to be concerned about water as much as they are about making fun of Illuminati “conspiracies” and, by ricochet, the millions of truth seekers around the world.

First, you have Bono making fun of Illuminati theories – the one whose NWO-friendly organizations are funded by Bill Gates (Mr. Depopulation) and George Soros (Mr. One World Government and One World Currency). This guy’s “entourage” is part of the Bilderberg group, the Council of Foreign Relations and other elitist branches of the Illuminati and HE’S making fun of the theories. Bono, nobody actually believes that the Illuminati is a bunch of celebrity douchebags meeting in secret. So why deform the truth to make it sound ridiculous?

Then you have Richard Branson who probably has enough money to fix the entire problem by himself but prefers to do lame jokes on YouTube for the lulz.

Here’s an idea: How about discussing the root of the water problem in Africa? Why not talk about the systematic exploitation and siphoning of every single resource out of Africa to profit colonial powers? The creation of fake African countries by colonial powers to keep an economic stronghold on them? The putting in place of corrupt puppet governments that do not build infrastructures for its people? The IMF imposing strict economic restrictions on these countries to help Bilderberg-backed multinational corporations? Yeah…no, that’s boring…and that goes against the interests of their “masters”. Yup, don’t want people to know that the ones making you feel bad about the problem are the ones who actually created it. Let’s make stupid Illuminati jokes instead.

I guess that the no-toilet strike suits well these celebrities…Because they’re full of crap.

1) Why not focus on the problems we have in our country first, Matt? Like children living in crack infested one room apartments with cockroaches and filth while their mothers shoot them up so they can go out to hook to make money to shoot more drugs into their dying bodies?

2) Olivia Wilde is DEFINITELY an android. No one is that beautiful.

The only club I wanna be in is God's club. All are welcome.

and what is the difference between God and Bono?

God doesn't walk the streets of Dubliin expecting people to believe he is Bono!

Wow, this must be the dumbest ad I have ever seen in my life….do they actually think they are funny? What good is keeping your crap in going to do about the water problem in poor/third world countries? I am from a third world country and our water is clean; thank you very much!! So these so-called celebs can crap all over themselves for all I care….The sad part is that they don't even realise that they are being used by their master lucifer. Brainless puppets..smh

What the hell does this video have to do with clean water?!!!

I've a better idea: why don't we all take a s--t on Matt Damon, Richard Branson, Olivia Wilde and Bono's lawn every single day they spout s--t about clean water until they get off their rich a---s to do something about it?
It's much more achievable than refusing to go to the bathroom until it's sorted plus holding it in would put us all at risk of colon cancer/prostate cancer.

I don't know why but I get the impression from watching Richard Branson laugh that he has serious halitosis.
And as for Olivia Wilde being an "android from the future", I'm guessing shes trying to make a joke ( a very lame one) about her role in "Tron Legacy".
A s--t actress in a s--t movie.
No s--t.

Bono is a complete prick! Who the f--k does he think he is? & Branson is on the same level, WANKERS!

All those with knighthoods are highly suspect of being illuminati members. The reason illuminati have to do charity funds is that Karma exists, if they don't counter the negative Karma, they in turn will be destroyed, but because of their narcissistic mentality and the fact they need the admiration of the masses to control society, they're trying to 'kill two birds with one stone'. If they were meek with pure intentions they wouldn't tell anyone as 'action speaks louder than words'. We should all tell them to 'get stuffed', to put it mildly, but in practice I would use extremely strong language.

Olivia Wilde has become a joke and is in danger of becoming one of the irrelevant celebrities that everyone uses when they want to make a negative point. Criuse and Branson being foremost among the self centred elitists.

Had I still been undecided my yes vote for freedom would have been cast just to annoy that creepy Branson.

they are trying to make conspiracy mean crazy.. which is not hard to do…alot of conspiracy people are crazy and they share their insanity all over the net.

i think many conspiracy theories are potentially true but when some whack job adds their newage rubbish into the mix then i don't bother listening anymore.

real TRUTH seekers need to cut down these whack jobs as soon as they unleash their BS.
911 was OBVIOUSLY an inside job of some kind.. but when these idiots add there hypothesis with NO evidence it really makes it hard to convince anyone that your not crazy as well.

yeh, and Bono is a major douchebag

More reasons to hate Bono, I always welcome those :')
On that note, this is so weird and unfunny. Also, f--k all these rich celebrities. Charity is important, you have the money

Hasn't Olivia Wilde's mother married into the Calthorpe family? An old peerage in England and a huge illuminati family. Stepsisters would include Cressida Bonas who is lined with Prince Harry.
That should answer everyone's questions.

Check out the original ISEE Water (bottled) site in Australia before the current one (don't know where it's gone) but if this isn't part of a grand worldwide conspiracy I'll stand corrected. The old logo (Illuminati eye etc) disappeared immediately on the resignation of Pope Benidict and the new logo was launched on the very day that the new Pope Francis was elected. In light of deadly prophicies from the Illuminati regarding water and water supply this should be investigated further, but by whom? The Vatican, the Grand Worshipful Master Mason of the Masonic Cult, the President of the USA, the UN? When will this encroaching tide of evil world domination be halted. When will our children become innocent again? Who are the faceless people that control our world? Who are the true owners of ISEE Water and what is their agenda in seeking world domination via an "innocent and legal" business undertaking? Be afraid, be very afraid!

As we all know, Illuminati is a cult that you have to be born into. Reading Olivia Wilde's Wiki Bio state's

If that isn't a person born into some kind of privileged platform of influence I don't know what is.

Vote Up0Vote Down  Reply
a video of wankers

What an offensive bunch of wankers.
I feel nothing but disdain for these poor excuses for humans.

The sad thing is, these talking heads are probably proud of that disgusting clip and actually think they were being witty and funny……cretins with too much fame.