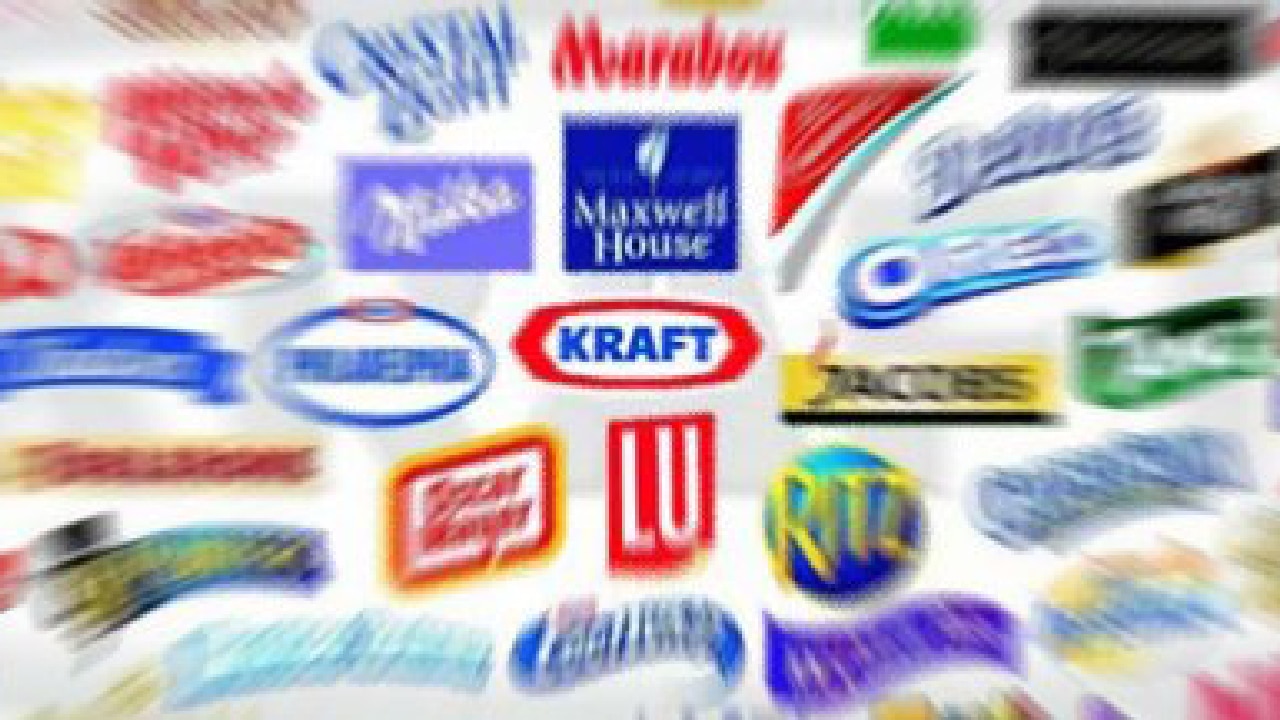 Not many people realize that most of the processed foods available on the market, whether they be in groceries or fast-food chains, all come from the same few companies.  Even less people realize that these companies are major actors in elite organizations who decide health, social and economic policies around the world. We’ll look at the big three companies who feed the world, their many brands and the tactics they undertake to make people crave their products.

If one were to carefully study the labels on packaged products in an average grocery store, one would probably notice that the same company names appear repeatedly: Nestlé, Kraft, General Mills and a few others. Many brands offering good ol’ fashioned homemade or all-natural/organic foods are nothing more than subsidiaries of these few world-wide mega-companies. The major difference between the main brand and the subsidiaries is packaging and advertising, which are targeted to reach different markets. In order to preserve the carefully crafted image surrounding a product, connections to the mother company are often conveniently hidden. Imagine an advertisement for bottled water going like this: “Drink pure, clear, refreshing Aquafina water, bottled with care from remote natural sources in the Himalayas … BROUGHT TO YOU BY PEPSICO, THE MAKER OF TACO BELL AND CHEETOS MIGHTY ZINGERS!” That would probably spoil the healthy, natural image they are trying to create for the product.

That is the reason marketing and branding are the most vital part of the food industry. Each product must live in its own “world”, separate from its mother company and similar products. Advertising is so powerful that two similar brands of cereal, made from the same basic ingredients, can be targeted to entirely different markets. For example, are Special K and Rice Krispies so different? From a strictly rational viewpoint, these products are nearly identical in shape, taste and ingredients. From an irrational (marketing) viewpoint however, they are in two different worlds. Advertisements for Rice Krispies revolve around colorful cartoon characters and played during Saturday morning kids’ shows while Special K tends to show fit women doing yoga (or on their way to or from yoga). Rice Krispies boxes have games and toy giveaways, while Special K‘s box gives access to a “weight loss challenge” website. All of this is smoke and mirrors, however, because at the end of the line, whether you choose one, the other or pretty much any other cereal in the grocery store, you’re eating the same thing and your money ends up at the same place.

The processed-food industry can be considered a true oligopoly. Together, the three leading food companies, Nestle, Kraft Foods and PepsiCo, achieve a dominant proportion of global processed-food sales. In fact, these three companies are often used as an example of “Rule of Three” in business schools, since they are a real-life example of a market being dominated by three gigantic actors. Their position as worldwide food providers has made these conglomerates extremely powerful, and they are represented in most elite organizations such as the Council of Foreign Relations. This not only allows them to provide their preferred policies on nutrition and health issues across the globe, but on economic, political and social issues as well. Such prominence also allows these companies to ensure their continued market dominance, through policy-making, access to insider information and the intimidation of potential competitors. If considered objectively, the oligopoly of major companies like these are a direct threat to free market theories.

Today, if a small food company were to create a new revolutionary product, it would find it difficult to obtain distribution without giving up its rights to one these conglomerates. In addition to dominating the shelves, the Big Three control most of the worldwide channels of distribution, to the point that up-and-coming companies cannot reach the consumers without dealing with them. The only way small business owners can avoid years of struggle and rejection to obtain shelf-space in supermarkets is to strike a licensing deal with one of the giants, where the owner cedes the ownership and the rights to the product in exchange for royalty checks (which are usually a small percentage of the sales). Each licensing deal consolidates these companies’ position and eliminates threats from any potential competitor who creates game-changing products.

Here are the top three companies and a summary list of their multiple brands:

Nestlé is the world’s largest food company. It has 6,000 brands, with a wide range of products across a number of markets including coffee, bottled water and other beverages, chocolate, ice cream, infant foods, performance and healthcare nutrition, seasonings, frozen and refrigerated foods, confectioneries and pet food. In 2009, consolidated sales were close to $120 billion USD and investments in research and development were $2.24 billion USD. The chairman of the company, Mr. Brabeck-Letmathe, is on the Board of Directors of Credit Suisse Group, L’Oréal and ExxonMobil. He is also a member of ERT (European Round Table of Industrialists) and a member of the Foundation Board of the World Economic Forum (an important actor in the push for a world government). Products sold by Nestlé include:

Nestlé has faced ongoing resistance around the world for its promotion of breast milk substitutes (infant formula), especially in third world countries. According to campaigners, Nestlé contributes to the unnecessary suffering and even deaths of babies, largely among the poor.

Advocacy groups and charities have accused Nestlé of unethical methods of promoting infant formula over breast milk to poor mothers in developing countries. For example, IBFAN claim that Nestlé distributes free formula samples to hospitals and maternity wards; after leaving the hospital, the formula is no longer free, but because the supplementation has interfered with lactation, the family must continue to buy the formula. IBFAN also allege that Nestlé uses “humanitarian aid” to create markets, does not label its products in a language appropriate to the countries where they are sold, and offers gifts and sponsorship to influence health workers to promote its products.Nestlé denies these allegations.

A subsidiary of Philip Morris (the maker of Marlboro cigarettes). Kraft Foods is the largest confectionery, food, and beverage corporation headquartered in the United States. It markets many brands in more than 155 countries; eleven of its worldwide brands each earn more than $1 billion annually. Like Nestle, Kraft has consolidated its status in the food oligarchy by buying gigantic brands such as Nabisco (Oreos, Chips Ahoy, Fig Newtons, Ritz, etc.) and Cadbury (Ferrero Rocher, Dairy Milk, Caramilk, etc.).

Kraft’s CEO Irene Blecker Rosenfeld was rated the “2nd most powerful woman in the world” by Forbes. Not surprising since most of the world consumes Kraft foods. Before joining Kraft, Rosenfeld was Chairman and Chief Executive Officer of Frito-Lay, a division of PepsiCo (another of the “Big Three”). Kraft’s brands include:

PepsiCo Incorporated is a global Fortune 500 corporation headquartered in Purchase, Harrison, New York, with interests in the manufacturing, marketing and distribution of beverages, grain-based snack foods and other products. If you hadn’t guessed it, its main product is Pepsi Cola, but soda pop is not the company’s only product. In fact, a teenager with the munchies could easily leave a convenience store with  three or four PepsiCo products without realizing it (or caring).

PepsiCo is a “Premium” member of the Council of Foreign Relation and of the Brookings institute, two of the most important organizations for the world’s elite (as seen in the article Naming Names: Your Real Government). The chairman and CEO of PepsiCo, Indra Nooyi, is part of the World Economic Forum. Within these organizations, executives from PepsiCo and other mega-corporations like Sony (the largest label in the music industry), Nike (the largest shoe seller in the world), Rockefeller Group International, and Lockheed Martin (the largest defense company in the world), work alongside various heads of state (including past US presidents), policy-makers (such as current US Secretary of State Hilary Rodham Clinton) and image makers (like Tom Brokaw and George Clooney), to develop political, social and economic opinions and recommendations affecting entire countries. The policies favored by these organizations are collectively steering the world towards a unified world government and a single world currency, in what is often referred as a “New World Order”.

Yep, even the good ol’ trustworthy Quaker guy is part of PepsiCo. 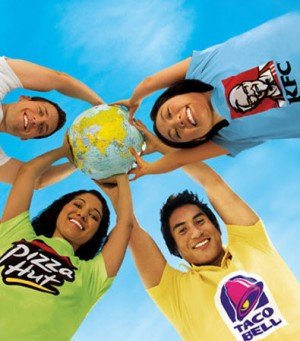 Many of the products listed above have existed for decades, some for over a century. What is the secret of such enduring success? First, the recipe has to be just right. As mentioned above, Nestlé spent more than $2 billion dollars in 2009 alone for research and development, which is mostly used to pay people in lab coats to create the most appealing, taste-bud satisfying, addicting and, of course, cost-effective products possible. The addictive properties of salt, fat, sugar and other chemicals are well known to the $2 billion-per-year researchers. Processed foods contain a carefully calculated mix of chemicals and additives that send “satisfying” signals to the brain, which the brain then continues to seek out in the form of cravings.

However, there are countless companies selling similar products. So in order to keep consumers coming back to their specific brand, corporations invest billions of dollars in the second secret of success: “brand loyalty” achieved through marketing and advertising.

Why should one care about which company sells which product? Primarily, it is a question of health. Almost all of the hundreds of products cited in this article contain toxic ingredients, from excessive amounts of  saturated fat to additives like MSG, High Fructose Corn Syrup (HFCS), mercury and/or aspartame. These substances, and many more like them, are poisonous to the body, the nervous system and the brain (as discussed in the article Dumbing Down Society: Food, Beverages and Meds). Processed foods are making the entire world fatter, sicker and dumber, even though only a few companies produce them. It is vital to know and recognize them … so you can avoid them. It is also important to recognize the basic marketing tactics that are being used to push consumers to buy processed foods.

The issue is much larger than individual health, however. To be aware of the companies selling your food is to be aware of important actors of the world elite. As the saying goes “control the food and you control the people”. If you believe it is important to know the truth about the world’s power structure, it is fundamental to know about these companies and understand their extensive reach throughout all areas of our global society. They might “only” sell food, but their power and position gives these conglomerates an active role in world governance, including economy, politics, law-making and even the military (who do you think supplies military mess halls?). The Big Three and globally dominant corporations like them are part of policy-setting “think tank” organizations such as the Council on Foreign Relations and the Bilderberg Group, which serve as the true motors behind global change. Should PepsiCo have a say in the invasion of a country such as Iran? Well, it does. And every time you buy a Pepsi or a bag of Doritos or jug of Tropicana, you are helping them become richer and more powerful. Luckily, however, there is an easy way to stop supporting these companies: Simply replace the processed products you buy from these companies with fresh foods bought from local businesses. You’ll improve your health and your local economy, but most importantly, you’ll also become the elite’s worst nightmare: a rational consumer.

FacebookTwitterSubscribe
Related Topics:advertisingdumbing down of societynutrition
Up Next