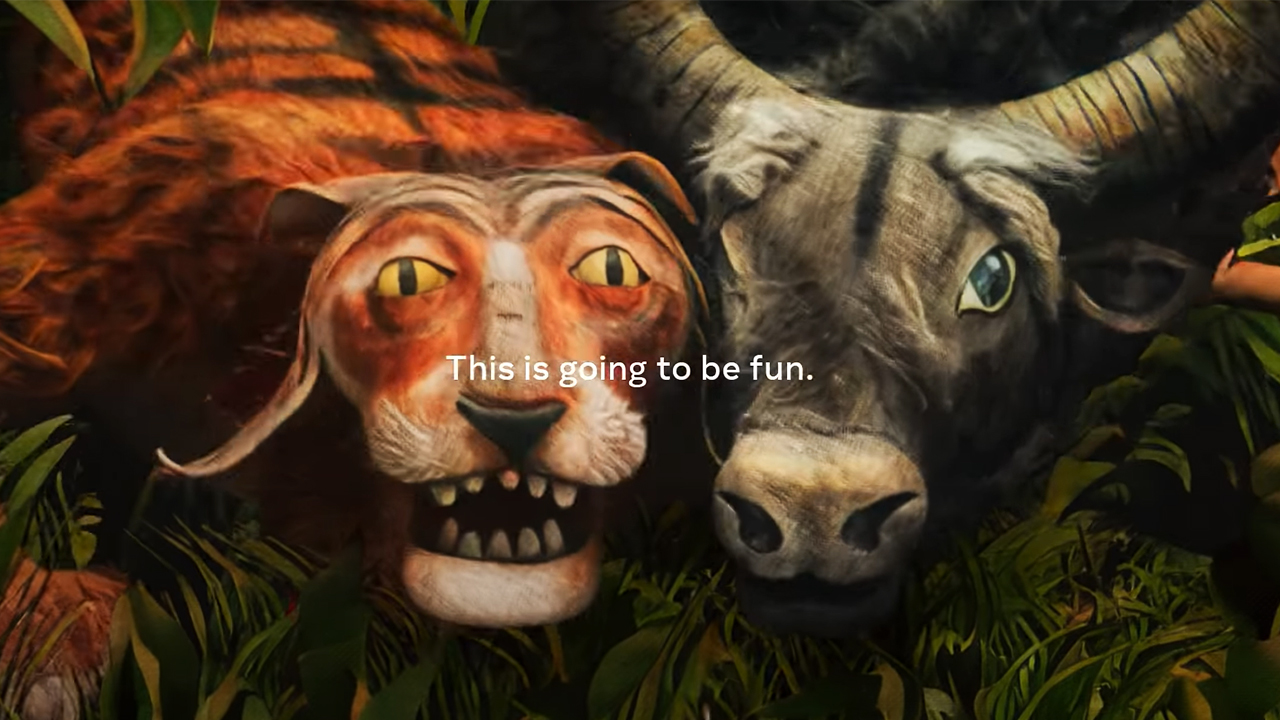 For months, media has been hyping the “metaverse”, a network of 3D virtual worlds in which people engage using avatars. Considered to be the “next phase of the internet”, tech giants such as Microsoft are currently investing billions of dollars to create an alternate reality where people will be able to “work, play, shop, and meet virtually”.

Indeed, nothing would make them happier than to turn humanity into a collection of isolated individuals who cannot accomplish anything without some tech gizmo strapped to their heads. While several companies are heavily invested in the metaverse, the main hypeman for it is Mark Zuckerberg. 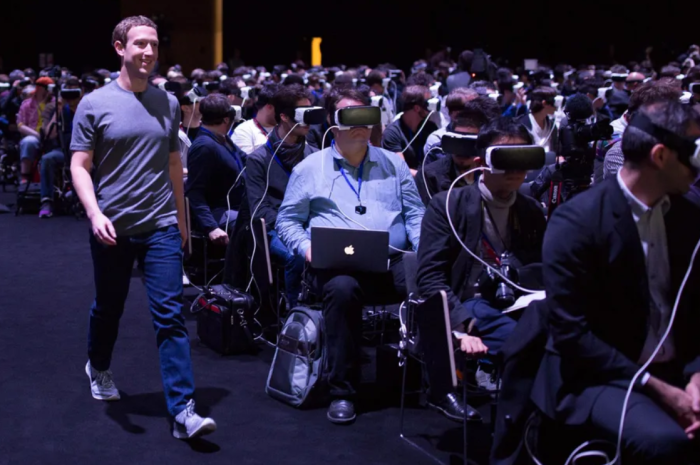 Zuckerberg at a 2016 VR conference.

The picture above aptly symbolizes the future they are trying to create: A bunch of people staring into machines as their overlord watches over. This picture is also fascinating for another reason: The faces of the two main subjects in this picture. Zuckerberg is smiling. The sitting guy next to him. Not smiling at all. In fact, his mouth is literally an upside-down smile. I didn’t even know that this was even possible. 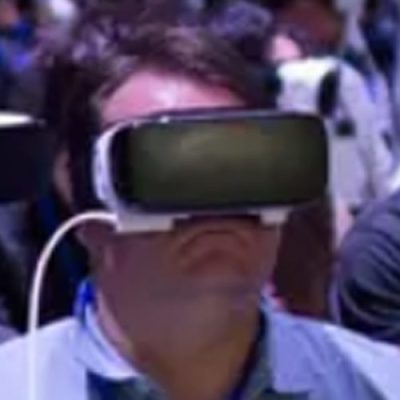 Undeterred by the fact that every attempt at strapping crap on people’s heads resulted in monumental flops (remember TVs with 3D glasses?), tech giants are marching on. And they keep flopping on.

Despite the failures, Zuckerberg is so invested in the metaverse that he renamed his company Meta. 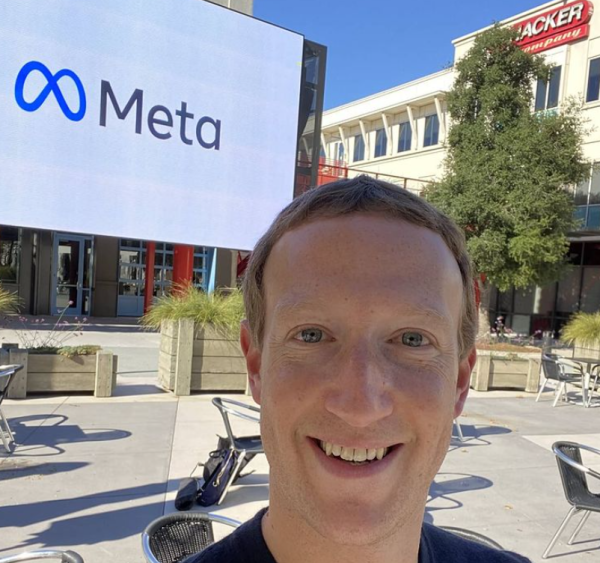 The Meta logo is a droopy-looking, deformed version of the infinity symbol. Why did they choose this symbol? Official PR says that it’s because “the metaverse has infinite possibilities” and so forth. But there is a lot more to it.

The infinity symbol has occult origins, tracing all the way back to the symbol of the Ouroboros. 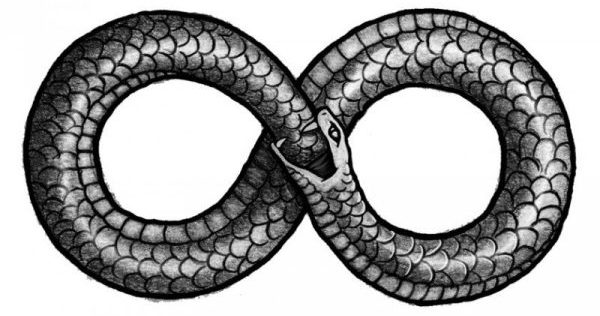 The Ouroboros symbol consists of a serpent or a dragon eating its own tail.

Ouroboros, emblematic serpent of ancient Egypt and Greece represented with its tail in its mouth, continually devouring itself and being reborn from itself. A gnostic and alchemical symbol, Ouroboros expresses the unity of all things, material and spiritual, which never disappear but perpetually change form in an eternal cycle of destruction and re-creation.
– Ouroboros, Britannica

The Ouroboros is found in countless occult and alchemical symbols, including the Leviathan Cross – also known as Satan’s Cross. 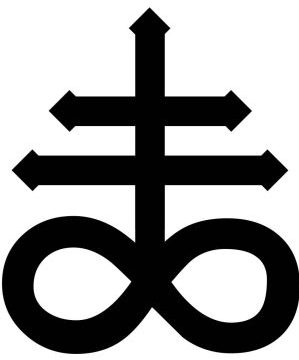 The Leviathan Cross is also known as Satan’s Cross. The symbol is a combination of two images that each has a specific meaning. The bottom loop represents infinity; the double cross on top is the Cross of Lorraine, which serves as the balance between Earth and higher spiritual realms. In alchemy, this symbol also represents the chemical sulfur (or brimstone) and is believed to be an analogy for the human soul itself.

Created by the Knights of Templar and co-opted by the founder of the Church of Satan, Anton LaVey, this symbol is used to invite Satan into the soul. The symbol was created to mock the cross and make a point about humans being their own centrum of balance and truth.
– Graveyard Shift, Be Wary Of Displaying These Recognizable Symbols With Powerful Mystical Connections

Did Meta select this symbol due to its occult origins? That might sound far-fetched. However, the ad meant to introduce Meta to the world is replete with occult symbolism. Here’s a look at it.

The Tiger & The Buffalo

Before even watching the video on YouTube, we can notice that the likes/dislikes and comments are turned off. That’s usually a clear indicator that people absolutely hate the video. But why?

Although the ad is objectively well-produced, it sends off a creepy, disturbing, and even hypnotic vibe that makes people feel uneasy. And when one understands the symbolism on display, that feeling only gets worse.

The video begins with a group of kids walking around a museum.

Behind the group are paintings by Hilma af Klint – a Swedish artist whose works are pure occultism.

Klint belonged to a group called “The Five”, comprising a circle of women inspired by Theosophy, who shared a belief in the importance of trying to contact the so-called “High Masters”—often by way of séances. Her paintings, which sometimes resemble diagrams, were a visual representation of complex spiritual ideas. (…)

She became interested in the Theosophy of Madame Blavatsky and the philosophy of Christian Rosencreutz. In 1908 she met Rudolf Steiner, the founder of the Anthroposophical Society, who was visiting Stockholm.
– Hilma af Kint, Wikipedia 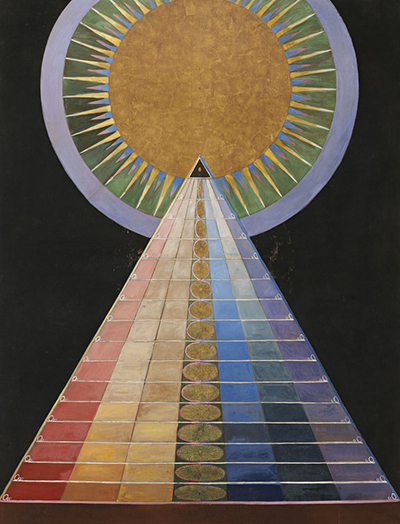 One of the Klint paintings in the Meta commercial: Group X, No. 1, Altarpiece.

It was here, in 1904, that Af Klint received a “commission” from an entity named Amaliel who told her to paint on “an astral plane” and represent the “immortal aspects of man”. Between 1906-1915, there followed 193 paintings – an astonishing outpouring – known as the Paintings for the Temple. Whatever one’s misgivings about the occult, she worked as if possessed – in the grip of what can only be described as inspiration. She explained that the pictures were painted “through” her with “force” – a divine dictation: “I had no idea what they were supposed to depict… I worked swiftly and surely, without changing a single brush stroke.”

In short, the makers of the Meta ad selected these paintings to be placed behind these kids for a reason: They foreshadow the occult symbolism we are about to witness.

In front of the kids is another painting.

Henri Rousseau’s Fight between a tiger and a buffalo.

As the kids approach the painting, it becomes 3D. Then, things get weird.

The tiger looks up at the kids, pats the buffalo on the head, and starts talking.

The tiger says “This is the dimension of imagination”. It’s actually a soundbite sampled from the intro of The Twilight Zone, a classic fantasy/horror TV show about surreal and paranormal experiences. As we’ll see, this Meta ad is all about presenting this new technology as some sort of mystical, spiritual experience.

But there’s something “off” about that experience. The first red flag comes from the fact that the tiger, a literal predator that’s in the process of killing a buffalo, introduces Meta to kids. When the kids approach the tiger, it pats the buffalo on the head, as if it was trying to deceive them into thinking that it is not predatory.

At one point, some weird animals stare into this kid’s soul who becomes literally entranced.

The kids then “enter” the painting and see more wildlife scenes. None of these scenes are in actual Rousseau paintings, they are extrapolations made by the ad creators. More importantly, they’ve also taken the liberty of adding strange symbols all over the place. 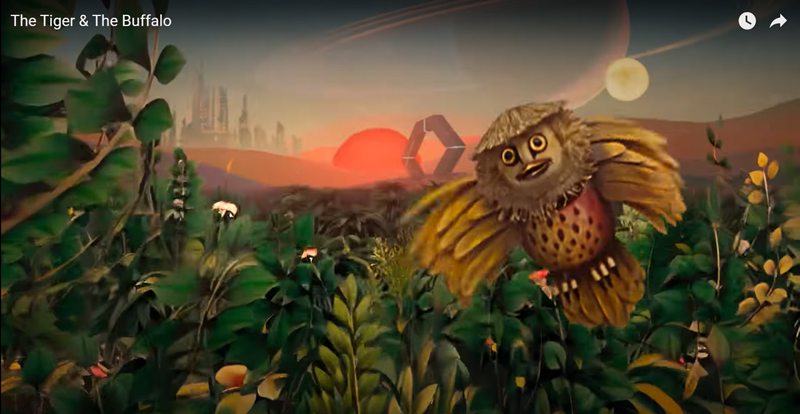 First, there’s an owl – a symbol that has been representing the occult elite for centuries.

Left: The insignia of Minerval, the third degree of the Bavarian Illuminati (1776). Right: The logo of the Bohemian Grove.

While the owl alone in the ad might not be a direct reference to the occult elite, other symbols in the scene complete the picture. For instance, in the background, for no specific reason, we see the planet Saturn. To make sure you understand that this is all about occult symbolism, there’s also a hexagon. The combination of Saturn with a 6-sided polygon sides points directly to one of the most ancient concepts in occultism: The ancient link between Saturn and the hexagram (six-pointed star). 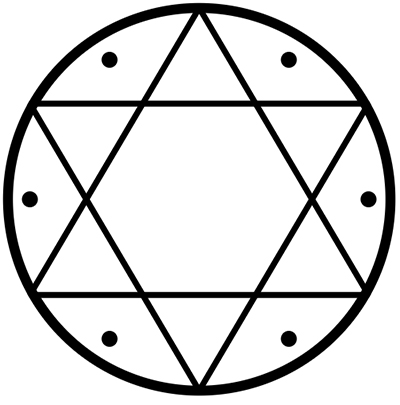 The seal of Solomon. Inside of it: A hexagon.

In short, the combination of the planet Saturn and the hexagon in the Meta ad is not “pure randomness”. It is pure symbolism. Interesting fact: A few decades ago, astronomers discovered an actual hexagon on Saturn. 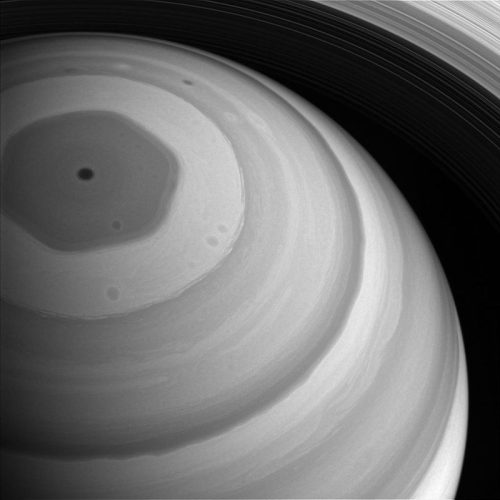 Did the ancients know about the hexagon on Saturn?

Going further in ancient symbolism, there is also a deep, occult connection between Saturn and the concept of Satan. Exploring the full depth of this claim could fill a book, but here’s the gist of it: Saturn is the ruling planet of the astrological sign of Capricorn, which is represented by a goat’s head. Depending on the culture, Saturn is associated with the goat-headed god Pan, the father of time Kronos (who devours his children), and the grim reaper. Saturn is associated with the limitations of the physical realm versus the infinity of the spiritual realm.

“In the Greek tradition, Capricorn is Pan, the goat-foot god, the god of wild hills and mountainside, overseer of shepherds and nature’s sensuous delights. In the Christian tradition, the sign of Capricorn becomes demonised along with its ruling planet Saturn (who becomes Satan), and Pan (along with the pleasure of the flesh that he invokes) becomes synonymous with the Devil.  Indeed, Capricorn has always been a sign traditionally revered, feared and made “scapegoat” in more -or-less equal measure.”
– The Alchemical Journey, Capricorn: Taking a Stand 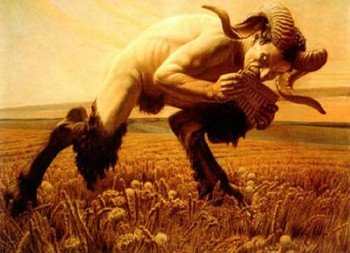 So, yes, there’s a lot of symbolism here. And the Meta ad appears to go out of its way to confirm the occult meaning of these symbols.

The kids are surrounded by snakes hanging from trees: Satan in the Garden of Eden.

This dude is so entranced by this crap that he’s literally out of it.

The video ends with the phrase “This is going to be fun”. Sounds like something a creep would say before doing something creepy.

For about a second, the tiger turns its eyes towards the buffalo, as if saying “I’m going to eat YOU later”.

An important detail that sums up the entire video: The buffalo only has one eye: One-eye sign.

In exactly 1 minute and 20 seconds, the Meta ad manages to convey several odd messages. First, this new technology preys on young people (the animal introducing them to it is literally a predator). Second, it seeks to immerse (or entrance) these people into an alternate world where every pixel is created and controlled by a big tech company. Finally, this world is filled with heavy occult symbolism, which adds a spiritual dimension to this experience.

It is as if they were saying: “God created this world, but WE are creating a new one”. Do you want to be a part of it?

The Story of Elizabeth Bathory: Proof That the Occult Elite Has Been Sick For Centuries

The War on Words: The Orwellian Agenda to Control Thought by Limiting Language