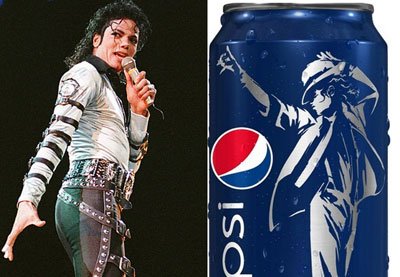 Some articles on this site discussed a rather disturbing trend: The “resurrection” of pop stars who died in mysterious circumstances (possibly sacrificed) to then have their image exploited by the very industry they spoke against. A recent example was the rapper 2Pac who was revived as a hologram (see the article entitled 2Pac Revived as a Hologram at Coachella: Why I Didn’t Like It).

Michael Jackson is probably the biggest (and saddest) example of a star who denounced industry manipulation to then die in very strange circumstances. In the mist of trials attempting to place the blame of MJ’s death on a single person (i.e. a patsy), Pepsi Co. announced that it would feature the King of Pop’s image on over a billion of its cans.

The announcement caused some controversy in mass media as people asked “Is it right to use the image of a dead person to sell products?”. Most people, including me, would instantly reply “Hell No”. Going beyond this ethical question, there is a deeper issue at stake here. Why is the very essence of artists who have been attacked, humiliated and almost destroyed by the industry so thoroughly exploited after their demise? Is it more than simply about money and publicity? Is it the elite’s way of saying “We used them, we sacrificed them and now we own them for eternity”?

Some might say that the controversy might help sell Pepsi cans. I for one won’t be buying Pepsi anytime soon. Here’s an article on MJ image being used by Pepsi.

More than one billion cans will be imprinted with the late pop icon’s image.

PepsiCo Inc. is resurrecting Michael Jackson to try to pump life into its flagship cola, three years after the singer’s death and more than a quarter century after the pop icon’s landmark sponsorship deal to become the voice of the brand.

Following an agreement with Mr. Jackson’s estate, the beverage and snack giant said Thursday that it will roll out a billion Pepsi cans with a silhouette of Mr. Jackson—who died in 2009—as part of its newly launched “Live For Now” global marketing campaign.

PepsiCo and Mr. Jackson’s estate declined to disclose the financial terms of the latest deal. Mr. Jackson signed onto a Pepsi sponsorship deal in 1984 for a then-record $5 million.

The new campaign is part of PepsiCo’s pledge to ramp up spending on its flagship cola, which has been losing ground behind archrival Coca-Cola Co.

PepsiCo is boosting its overall marketing budget this year by as much as $600 million, or by about 20%. The extra money is going to a dozen large global brands, which also include Lay’s potato chips, Gatorade sports drinks and Quaker oatmeal. The company has been pouring more funds into Pepsi, its biggest brand by revenue, since last year.

A spokeswoman for Mr. Jackson’s estate said the PepsiCo campaign represents the first branding deal since Mr. Jackson passed away, but that more such marketing agreements are planned.

Mr. Jackson starred in several Pepsi advertising spots in the 1980s and 1990s, including an infamous commercial shoot in 1984 that inadvertently set the King of Pop’s hair on fire, burning his scalp. Pepsi’s new campaign around Mr. Jackson is timed to coincide with the 25th anniversary of “Bad,” the multi-platinum album.

PepsiCo said it would begin distributing the special-edition cans in China this weekend. The cans will arrive on U.S. store shelves later this month, part of a broader rollout to about 20 other countries in Asia, South America and Europe.

Bringing a deceased celebrity back from the dead for marketing purposes is a risky business.

“It’s like the dead is dancing to sell your product,” said Scott Lerman, chief executive officer of Lucid Brands, a branding firm.

In 2007, ConAgra Foods Inc. reincarnated their company spokesman, Orville Redenbacher, who had died in 1995. It ran a commercial that featured a computer-generated version of Mr. Redenbacher who had gotten a modern makeover. Pundits dubbed the character “Orville Deadenbacher.” An ad critic for Adage, an industry trade magazines, called the posthumous pitchman: “Madison Avenue’s first pitchzombie.”

Following Tiger Wood’s infidelity scandal, Nike Inc. NKE -2.26% aired a black-and-white commercial showing Mr. Woods gazing into a camera as a voice-over of his late father, Earl Woods, spoke to the golfer about taking responsibility for his actions. The ad received mixed reaction, although many labeled the spot “creepy.”

Dead icons also can create enormous buzz. Earlier this year, a digital version of the late-musician Tupac Shakur appeared on stage during a music festival with Snoop Dogg and Dr. Dre. An Internet video of the show became an instant phenomenon.

That appeal is especially important in China, where Coke’s namesake cola had a 26.9% share of the soda market last year, ahead of Pepsi’s 19.0% share, according to Euromonitor International.

In its efforts to narrow that gap, PepsiCo in March secured Chinese government approval for a joint venture with Tingyi Holding Corp., a leading beverage player in China.

Coke, which also enjoys a bigger share of China’s overall beverage market than PepsiCo, said last year it would invest $4 billion over the next three years in the country.

By marrying its cola with famous musicians, Pepsi is returning to its marketing roots. Aside from Mr. Jackson, previous Pepsi pitchmen have included Ray Charles, Madonna and Britney Spears.

It recently invested an estimated $60 million to sponsor “The X Factor,” a TV music-talent show launched in the U.S. last autumn, to compete with “American Idol,” which Coke sponsors. A Pepsi TV ad that premiered last year on “The X Factor” featured a clip of Mr. Jackson after a long hiatus.

Coke also has tapped heavily into music in “Open Happiness,” the global campaign it launched in 2009 for its trademark cola. Coke recently recruited music producer Mark Ronson and singer Katy B to create a new song, “Anywhere in the World,” that it plans to market heavily as part of its Olympic Games sponsorship in London this summer.

In addition to the cans with Mr. Jackson’s silhouette, PepsiCo is teaming up with musicians and producers to reinterpret some of the singer’s songs, part of a broader digital campaign. It also promises “epic, live events” tied to Mr. Jackson in the coming months.